Language
Waves promise their new plugin will give you vintage warmth of vinyl records played on classic turntables and needles. It's a precise model of Abbey Road Studios' vinyl cutting and playback gear.

In the heyday of the analog era, vinyl records were the medium that provided the public with the music they loved—along with analog tape, the sound of vinyl helped to define the sound of recorded music. Of course, eventually, just as with tape, the realities of manufacturing and the rise of digital media eventually spelled the end of vinyl as the dominant medium for music distribution.

But nowadays, even as physical digital media (CDs) are on the wane and virtual distribution is taking over, vinyl is undergoing something of a resurgence. Vinyl production is up, especially with indie music, and while it’s still a niche market, it’s a healthy and growing one. The rich, open sound of good vinyl pressings always remained popular with audiophiles and many music lovers, and the almost-lost art of vinyl production (and mastering for vinyl) is once again a concern for artists, producers, and engineers who’ve retained their preference for this classic analog medium.

And just as the popularity of analog processing gave rise to more and more sophisticated digital emulations of the colorful nonlinearities of tubes, transistors, and tape, the sound of vinyl is also being emulated digitally—that’s where Waves’ new Abbey Road Vinyl plug-in comes in. 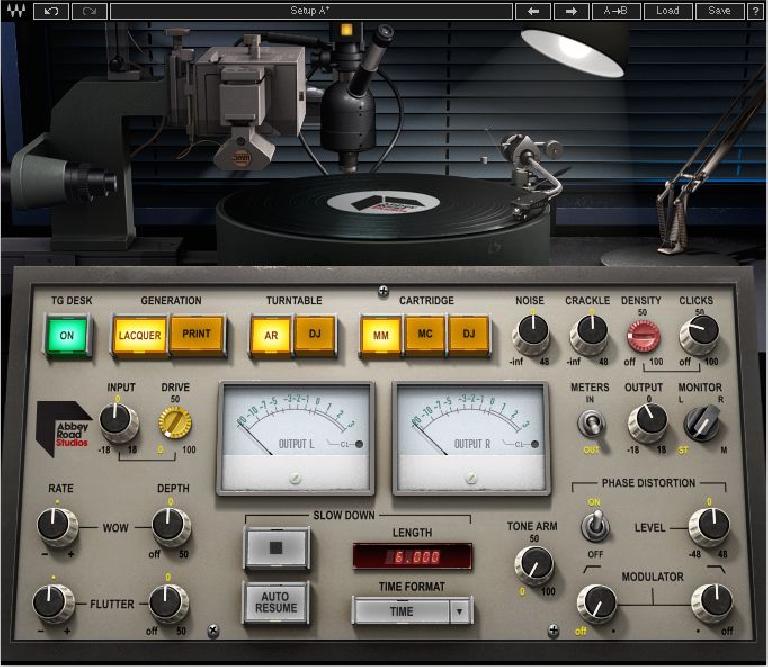 As most people know, Abbey Road is one of the premiere music recording and mastering facilities in the world. In the '60s, their highly modified collection of analog gear—both tube and transistor—lent its distinctive character to recordings from The Beatles and Pink Floyd, continuing all the way to the top artists of the present day. Besides their legendary recording studios, the current Abbey Road facility also maintains a classic mastering operation, utilizing much of the same vintage gear that contributed to the Abbey Road sound—maintained and refurbished electronics (like their TG-series mastering desk) help bring the classic analog vibe to the final stage of production, and the studio’s vintage record cutting equipment (like their Neumann cutting lathe) puts the final touch on any production earmarked for vinyl distribution.

For years now, Abbey Road has collaborated with hardware and software makers to bring the sound of their custom analog gear to a wider market. Notably, Chandler makes a number of hardware emulations of Abbey Road gear, and Waves offers a full suite of software emulations of just about everything Abbey Road has to offer, from the early tube electronics (including the REDD consoles and Siemens V72 amps), to the solid-state TG-series boards, to the tape machines that recorded so many classics. The Abbey Road Vinyl plug-in is the latest addition to this collection, providing the Abbey Road touch all the way through the final stage of production, and offering the classic sound of vinyl, even for purely digital distribution.

So what do you get with Abbey Road Vinyl? Let’s have a look at the feature set on tap here.

Back to the Future

Abbey Road Vinyl includes the full signal chain as found in the studio’s mastering room. There are models of the various gear, and controls to tweak and fine-tune the analog contribution of the emulations.

The signal path starts (on the left) with a model of the TG 12410 Transfer Desk—this imparts the sound of the solid-state electronics also found in the other TG-series consoles (like the 12345 desk used to record the Abbey Road album and many Pink Floyd records). It’s not a full console—there are no user controls for EQ or dynamics—it simply adds the sound of the signal path, for that extra presence and richness. Input level and drive controls let you dial up how much gain and analog edge you want from the TG Deck (as well as from the other modeled physical components).

The next control (moving to the right) offers a choice between the sound you’d get off the initial lacquer disk from the emulated Neumann SAL-74 cutting rack (LAQUER), or the sound of a final vinyl pressing (PRINT).

A quick explanation: disk cutting involves several stages—the initial lacquer is cut by the cutting lathe; then several duplicates are made (Father, Mother, Stamper). The last of these (Stamper) is then used to press the finished vinyl disks for distribution. Switching between these two options lets you hear how the process affects the sound as it moves from original master to final pressing. 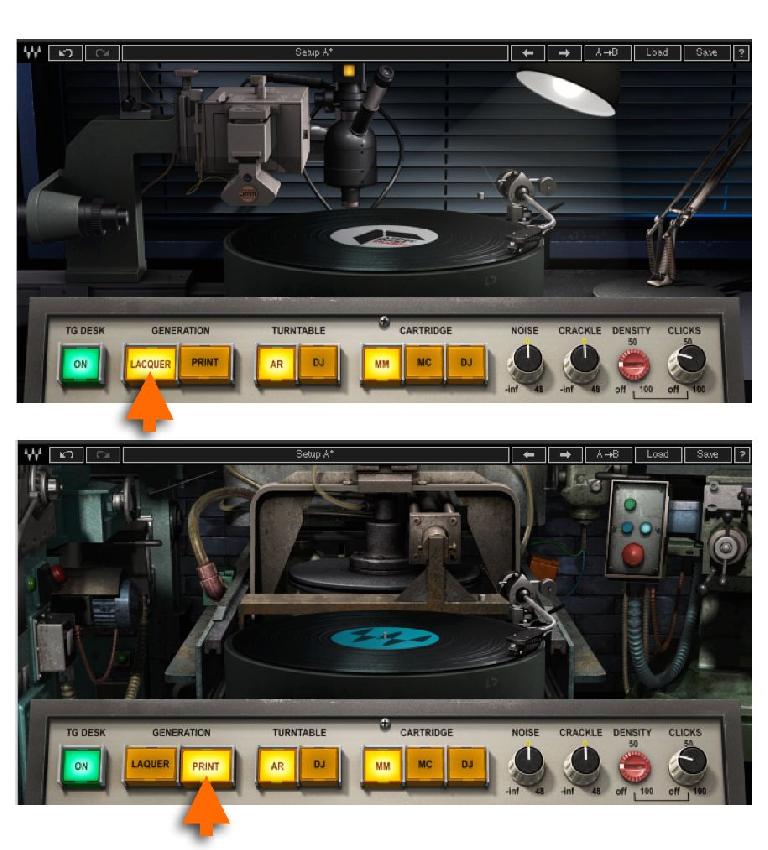 In fact, that’s another really cool aspect of Abbey Road Vinyl. For any younger engineers who might have a new interest in vinyl pressing, or artists considering a vinyl release, this plug-in can be a terrific learning tool—you could use it to, in effect, audition the effect of vinyl mastering and duplication, without the need for costly test pressings (of course, you’re getting the specific sound of vinyl pressing at Abbey Road, but it’s still a good reference tool for general knowledge about the process—the manual is also helpful and informative about that process, in addition to covering the plug-in’s specific controls).

Next up, there are emulations of two different turntables and three different phono cartridges—this is where you can dial up most of the subtle variations in sound the plug-in has on tap. The turntable option offers the sound of the table built into the cutting lathe at Abbey Road (AR), as well as a more generic DJ-style direct-drive table (DJ—the graphic suggests the classic Technics SL-1200 model). 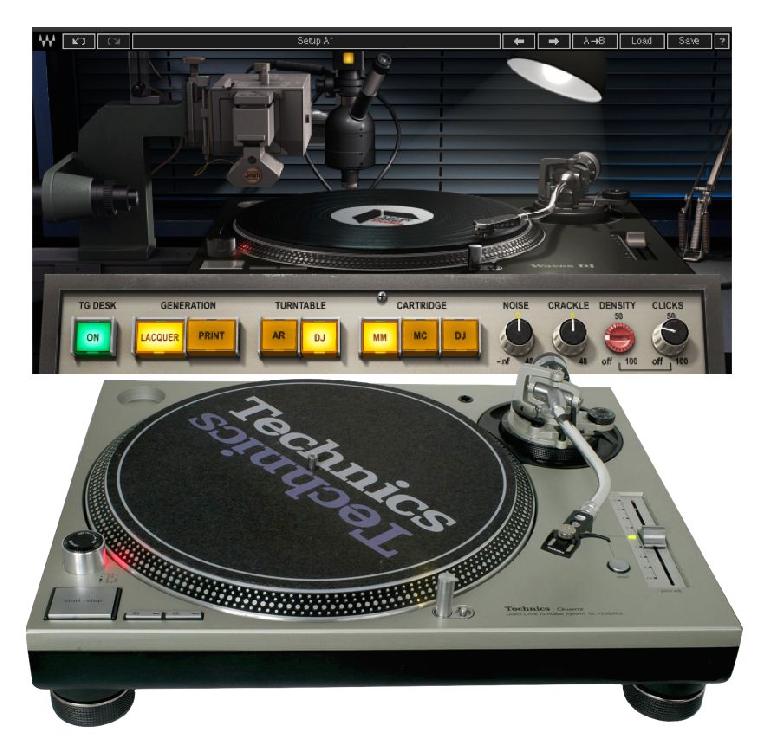 The turntable emulation also features an option that pertains to the tonearm—you can position it anywhere from the outer edge of the record to the innermost grooves, and it will reflect the difference in sound you’d get in the real world. Those of us who came up with vinyl remember well how the inner tracks on a record (especially after multiple plays) end up with greater distortion and loss of highs—this option provides a very useful simulation of what to expect in that regard from an actual vinyl pressing. 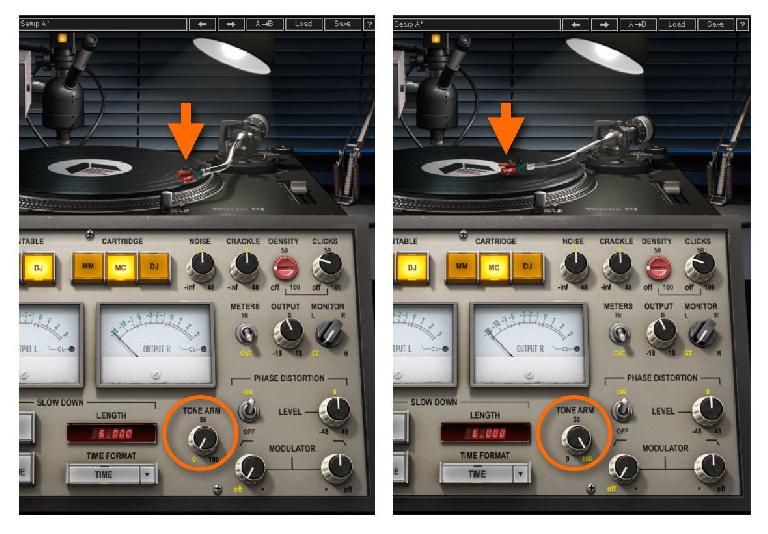 The cartridges include a Moving-Magnet design (MM), a Moving-Coil design (MC), and a “cheap” popular widely used DJ cartridge. 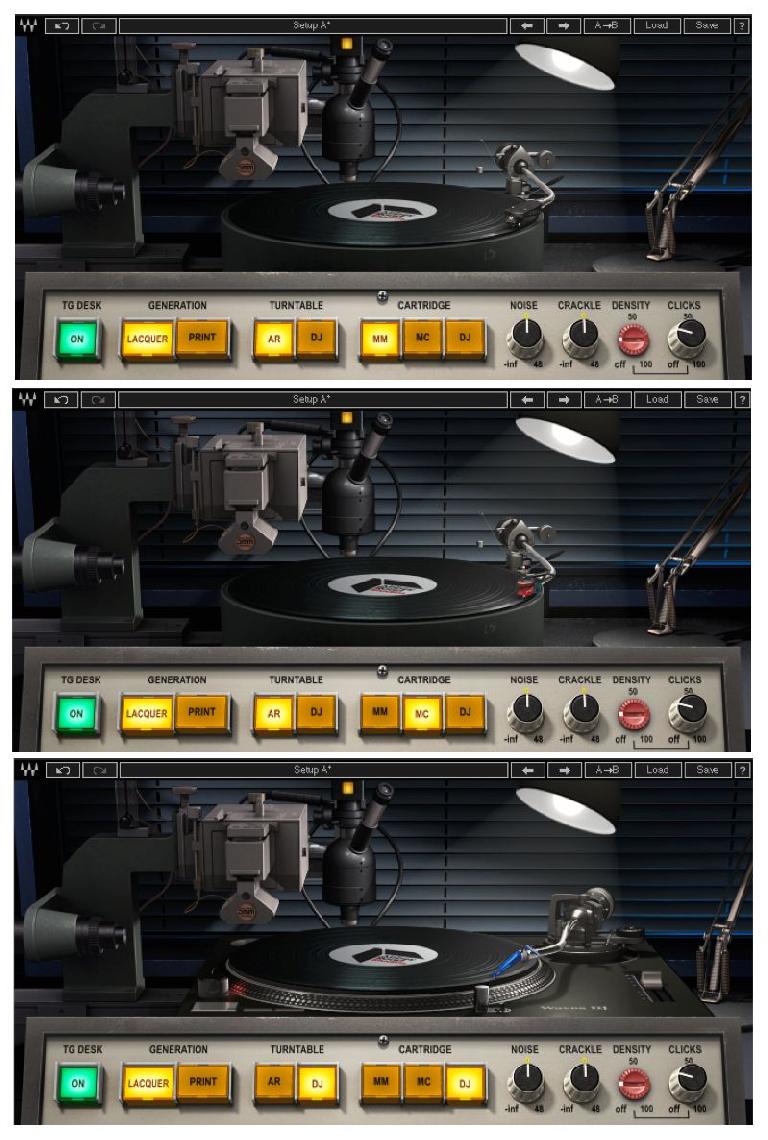 Moving-magnet and moving-coil designs differ in the way the cartridge assembly operates, with moving-coil designs typically used for audiophile-quality gear. However, here both emulations are of high-quality models—you can hear the differences, with MM model a bit cleaner and darker, and the MC option having a bit more subtle presence. The DJ model is a bit more gritty, but that may be desirable for edgier musical styles—once again, for those who might be using Abbey Road Vinyl to anticipate an actual vinyl release, it might provide a more realistic emulation of what the final pressing could sound like on typical, consumer-level playback gear.

There are options to set the overall output level, calibrate the (VU-style) meters, and audition the signal in full Stereo, Left or Right only, or Mono. The rest of the controls are dedicated to fine-tuning the depth of the non-linearities that add that analog character to the various emulations. 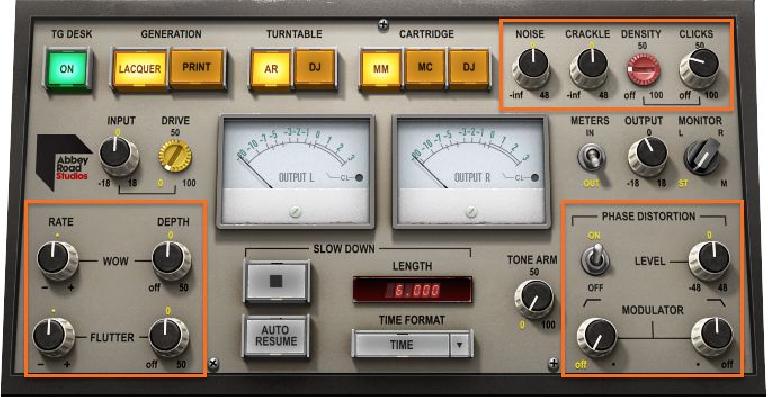 There are controls for dialing up the desired amount of record-surface noise—hiss, crackle and pops (clicks)—for when you want a more pronounced vinyl vibe. Wow and Flutter dials let you control how strong these typical vinyl flaws are; you can also tweak the amount and character of the plug-in’s emulation of the inevitable phase modulation, especially when the tonearm is set to simulate the sound of playing back the inner grooves of a record. It’s important to note that these effects are part of the emulations, and are on by default, at subtle depths that contribute subliminally to the simulated vinyl character. It also should be noted that the default values change, depending on the particular hardware selections made (lathe, turntable, cartridge)—assumedly the most natural, realistic effect will be had at these default settings.

There’s also one effect—the classic turntable shutdown/slowdown effect. This is controlled by the button at the lower center, below the meters, and you can set the length of the slowdown in either seconds or beats. The effect is pretty widely emulated, but this emulation is quite good, and easy to implement either in real time or via automation.

Abbey Road Vinyl also includes a CPU-Lite version that incorporates the cutter, turntable, and cartridge options (though without the full analog-modeled sonic attributes of the main version), along with the surface noise controls and slow down effect, but omits the TG Desk emulation and the fine-tuning controls that let you add/tweak those sonic attributes. 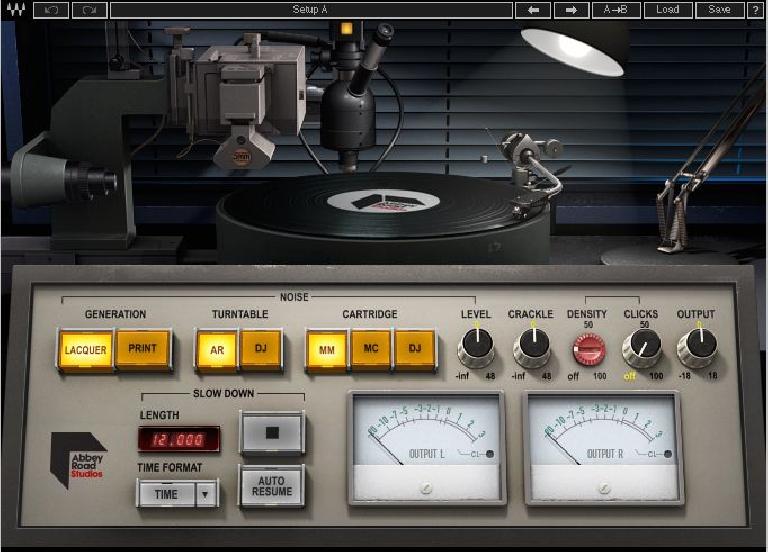 Running a mix or two through Abbey Road Vinyl reveals the subtle (and sometimes not-so-subtle) variations in tonality that the various combinations of models provide. The audio examples below should show those variations from some combinations of the main modeled components (as well as the slowdown effect).

Audio example 1: The contribution of the TG Desk (phrase 1, 4 bars each: Off, then On) and the different turntable options (phrase 2, 4 bars each: AR, then DJ):

Audio example 2: The sonic variations of the three cartridges (in order, 8 bars each: MM, MC, DJ):

I’ve used (and reviewed) all the other Waves Abbey Road plug-ins, and count myself as a big fan of this series. Abbey Road Vinyl is another welcome addition to the family, both as a simulation of the character of analog/vinyl mastering, and as a learning tool for those new to the world of lathes and grooves. It should be a useful—and characterful—addition to more transparent mastering suites, for anyone who has a taste for the classic sounds of the vinyl era.

jimijames
This may be too good to pass up. Thanks for the tip, Joe!