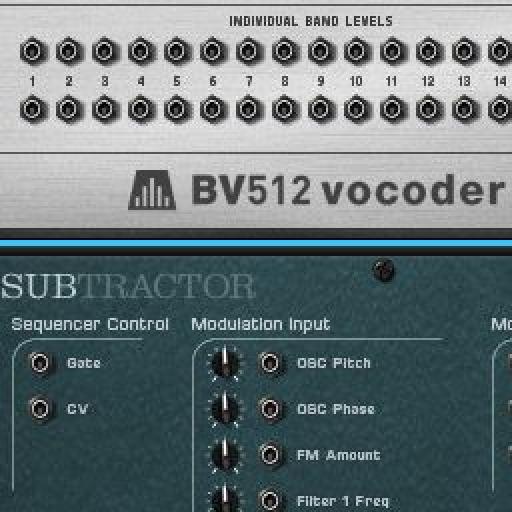 Language
Vocoding seems to capture the imagination of every musical genre whether it's used on the voice or other instruments. G.W. Childs exercises his vocal chords and synthetic sensibilities in Reason 6.

Reason's relationship with its BV512 vocoder has always been something of an estranged one. This would be largely due to the fact that Reason, up until now, was never really an audio application. It was a selection of instruments and FX with a sequencer. In the past, this always saddened me because the BV512 Vocoder has always been my favorite. It just has that sound!! But, sadly, if you wanted to use it, you had to record your audio, bring it into Reason, run it in to a sampler... Blah, blah, blah... It really took more time that in was worth... Well, no, I still spent the time doing it anyway...

Now that Reason has audio, the game has greatly changed with the BV512 vocoder. No longer are you limited to running recordings into a sampler, and then setting the vocoder up. You can now run the vocoder in real-time...while you sing!

This really changes the game, because you can now use the BV512 live if you want to, or, you can add vocoding to a recording after the fact. It's a much more fluid relationship with Reason, and you! In this article, I'd like to show you how to set up the vocoder and how to set it up for live performance.

In a brand new Reason session, with nothing in it, I'm going to create an audio track. This will be my conduit in to the virtual world of Reason for my real life voice! 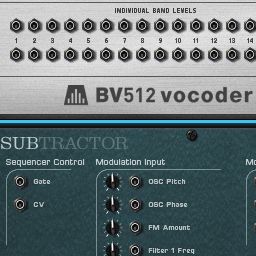 Next up, we're going to create a BV512 vocoder from the elaborate list of devices available within Reason.

You'll notice that after it's created, you will suddenly lose signal. This is because the BV512 actually auto-routes itself when you create it. If you press Tab, you'll see what I'm talking about. The output from the Audio Track device goes in to the Carrier input, which is completely wrong for classic vocoding. It should actually go in to the Modulator input.

Now, if you speak in to the mic, you'll notice input going in to the BV512 Vocoder!

In order for a vocoder to work, you have to have both a Modulator (taken care of in the last step) and a carrier. The modulator does what it says it will do, it modulates the tone of the carrier, which is usually supplied by a synthesizer. Let's go ahead and supply one now!

I'll right-click on the BV512 vocoder and create a subtractor. And, you'll notice that when it's created, it does not auto-route itself at all! 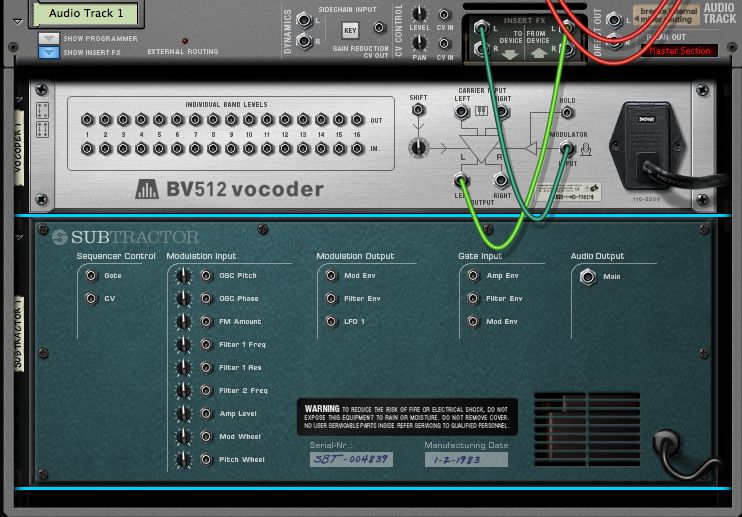 I'll route the output of the Subtractor to the Carrier input of the BV512 vocoder now. 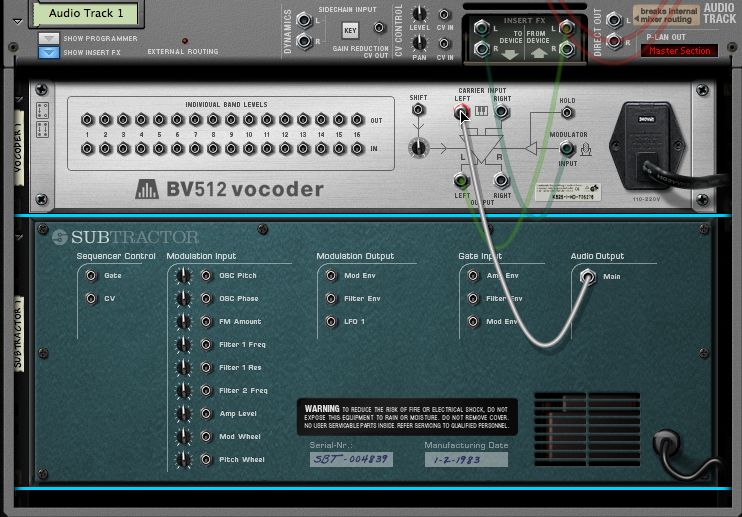 Tip: Just so you know, the way that you can always tell if you are routing things correctly with the vocoder is by looking at the little pictures on the back. The modulator input has a small microphone next to it.

The Carrier input has a small keyboard next to it.

Okay, here's where things get a little tricky: A vocoder will never work until both the carrier and the modulator inputs are firing at the same time. To make this happen, let's right-click on the subtractor and select 'Create Instrument Track for Subractor 1'.

Now the sequencer will appear, and you'll notice that your Subtractor is now live, and has MIDI input, indicated by the small keyboard.

Now, we have MIDI input, and we have audio input, but if you try singing, and playing after setting up the Subtractor, you'll notice that you still don't hear anything. We need to Enable Monitoring on the Audio track.

Now, if you play your Subtractor, and sing at the same time, you will hear a very basic vocoder sound. This is especially true if you're using the default Subtractor patch. Why don't we spice things up a bit with a more robotic vocoder sound?

The Subtractor may be the small synth on the block in Reason City but trust me: it's great for vocoding, and can sound huge. Right-click on the Subtractor, for safe measure, and select Initialize Patch.

Next, raise the Filter Frequency of the Subtractor all the way up. This ensures that you can hear the full frequency range coming through the vocoder.

Then, enable the second Oscillator on the Subtractor, and take the octave down 1. This will make the Vocoder much more 'layered', because we already have the first oscillator going over the top in a higher octave. Layering two octaves will also increase the robot feel. Much more 1980s Transformers, Battlestar Galactica.

Now, let's change the Phase mode to Minus on Oscillator 2. This will really thicken things up, and make it Phat, phat, phat!

And, finally, turn the High Frequency Emphasis all the way up, so you can hear the full vocoding mightiness!

Let's give it a listen now!

See, much bigger, phatter, and Sound-wavier. There's so much more in terms of sound possibilities. Makes sure that you experiment with both the Vocoder and the Subtractor, because there are tons of sound alternatives.

Now that you're set up, you can sit and make robot voices for the rest of the year and it will take little time and energy. You can also now use Reason as a dedicated vocoder if you have a second machine that runs a separate DAW... And, you can use Reason live, as long as your remember to enable monitoring.

The fact of the matter is, you have unbridled access to one of the best vocoders out there, with some of the best synthesizers as carriers, as well.