Language
How well does this portable, 4-operator FM additive synth with integrated looper and mini-keys perform? Find out in this video review by Matt Vanacoro.

The Yamaha reface series is a diverse group of keyboards that are ultra-portable, fully functional, and sound great. The DX is my absolute favorite of the bunch for a ton of reasons. I’ll go into them one at a time, but suffice to say, this keyboard is amazing. It’s well worth the price, it’s a piece of history, it’s both retro and forward thinking at the same time, and it’s a ton of fun to play.

The reface DX is a modern re-imagining of the classic Yamaha DX7. I actually own an original DX7, so I was extremely interested in comparing this modern portable incarnation to its original version. The reface DX utilizes 4-operator FM synthesis with 2 programmable effects blocks. Each FX block contains seven different types of selectable effects, and all of the parameters are adjustable with a multi-touch interface.

To be clear, there is actual algorithmic synthesis going on here. This isn’t a collection of samples. You can adjust the operators, add continuously variable feedback on each one, modify the algorithms, and tweak the effects. It looks, feels, and sounds just like an original DX7… but at a quarter of the size.

You can make some really tremendous sounds with this keyboard. Don’t let its compact size fool you, it’s an incredibly powerful FM synth which is absolutely capable of funky keyboard sounds, thick basses, soaring leads, and truly spacey pads. There are even 32 voice memory locations available for you to store presets—something unique to the DX when compared with the rest of the reface series.

The retro style makes it look and feel like an original DX7 for sure. The addition of multitouch is great, too. It allows you to move parameters up and down precisely with a tap, or coarsely by swiping your finger up and down. The keyboard itself feels incredibly sturdy and boutique. There is an included phrase looper, as well as an octave switch that gives you the full range of sound. The keys are compact, and yet they feel quite good under your fingers. 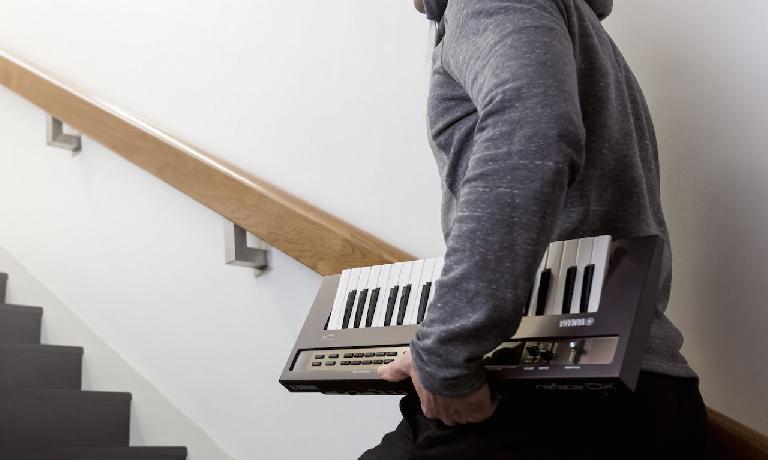 Be careful who you lend your Reface DX to...

The included speakers are small, but powerful for their size. They are the same 2 watt speakers across the entire reface line. I paid special attention to them for this particular review, however, as the precision of editing FM sounds requires good monitoring. I absolutely found that I could design some really cool sounds using the speakers, and feel confident that when plugged into my studio speakers they would hold up.

I’m a big fan of FM synthesis, and when the sounds of the DX series started showing up in modern music once again, it brought a smile to my face. The thought of having a DX7 capable of SITTING ON MY LAP while I’m out on my deck makes me extremely happy. The reface DX is my #1 favorite of the series, and to be quite honest, it’s one of my favorite keyboards that I’ve purchased in the last few years. It’s extremely fun, and sparks creativity from the moment you pick it up.

Cons: None. Not a single one. This is an amazing keyboard.