Traktor's effects can be tailored to suit many kinds of music performance. Here, Sara Simms shares her secrets for great-sounding techno FX with audio examples.

A good techno record lends itself to a few well-placed effects. Many techno cuts are sparse enough that there's room for DJs to add imaginative effects to tracks and mixes. If you're a DJ who's keen to learn more about how to use Traktor's effects in techno sets, read on...

Delay is an effect that can be creatively used in many ways during sets. There are many types of delay in Traktor, each with a unique sound that should be explored. To learn to use delay, practise using each type of delay in a Single FX unit in Traktor. To create a Single FX unit, open the Preferences, navigate to the Effects section and in the FX Panel mode select Single. 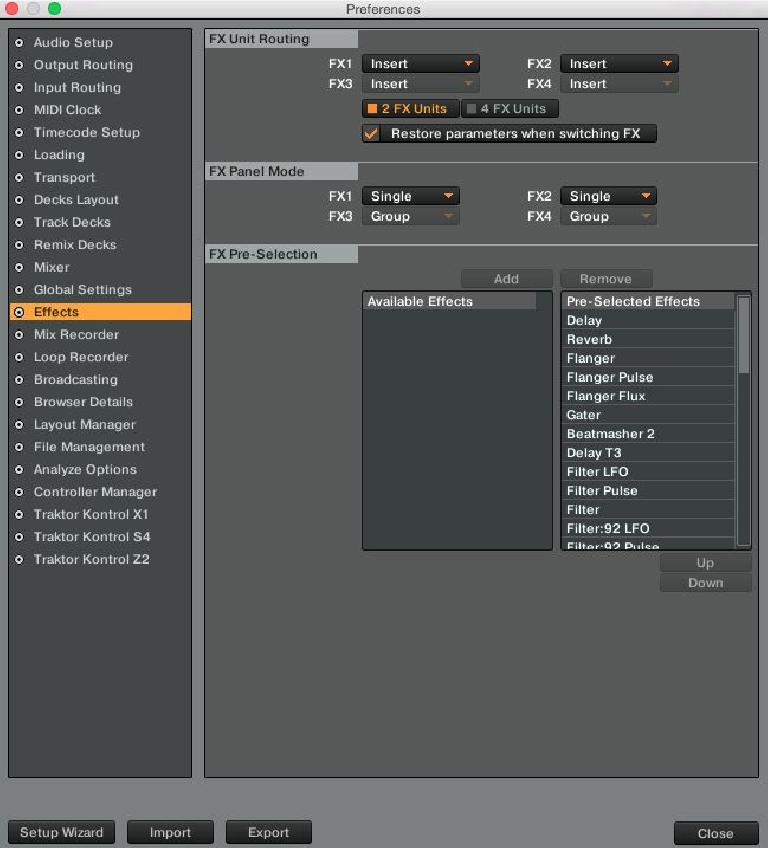 Traktor's 'standard' delay may be a seemingly common effect in Traktor, but it's capable of producing amazing textures. Begin by loading up Delay into a single FX unit and turn the effect on by pressing the ON button. The Dry/Wet can either be at 50%, or at zero and slowly turned up clockwise. New rhythms can be created by turning the Rate (SPR level) down, then raising it back up again.

Use the EQ on the mixer or the Filter in the delay to cut the bass so only the percussion and hi hats are delayed. Close the FX by gradually turning down the D/W to 0 or pressing ON to turn the FX off.  A quick ending tends to sounds best if you turn off the effect on beat with the track.

Start with the Delay T3 on, the D/W down to 0 and the Rate (FR.R) to about 0.25. Slowly raise up the D/W up and once it's at about 50% turn the FR.R on. Experiment with turning the Rate (FR.R) counter clockwise, then clockwise to create interesting sounds and transitions. I find Delay T3 works best with tracks that have sparsely programmed rhythms.

The Delay's Freeze parameter can be used to create transitions in a mix where other tracks can be brought in, or the track that's playing can trail out entirely. To use this effect, start with the Delay on in a single FX unit, then push Freeze (FRZ) located underneath the Feedback button. It takes a few seconds for the Delay to fade away, which gives time to mix in other tracks. This technique also works well with the other types of delay, including Ramp Delay and Tape Delay.

Ramp delay is a an effect that can produce psychedelic sounding, tripped out delay effects that sound great on techno tracks. Start out with the Dry/Wet (D/W) on the Ramp Delay turned to 50%, the Filter at about 80%, the Duration at 1/4” and the Rate all the way up at 1/32. Ramp Delay sounds best when it's applied during a part of the song with minimal percussion.

Turn on the effect then take the Rate down to 1/16, then turn the rate back up to 1/32. Once you master this, experiment with starting with the D/W control set to Dry at 0 and slowly turn it up while you sweep the Rate control. To transition back into the track, slowly turn the D/W down to 0 for a gradual fade. To turn the Ramp Delay off quickly, simply press either FX 1 or FX 2 (whichever its assigned to) to take the effect out of the mix.

FX can be used in Groups in Traktor, which mean more than three FX are stacked on top of each other. To create an FX chain, open the Preferences, then Effects and in the FX Panel mode, then select Group. 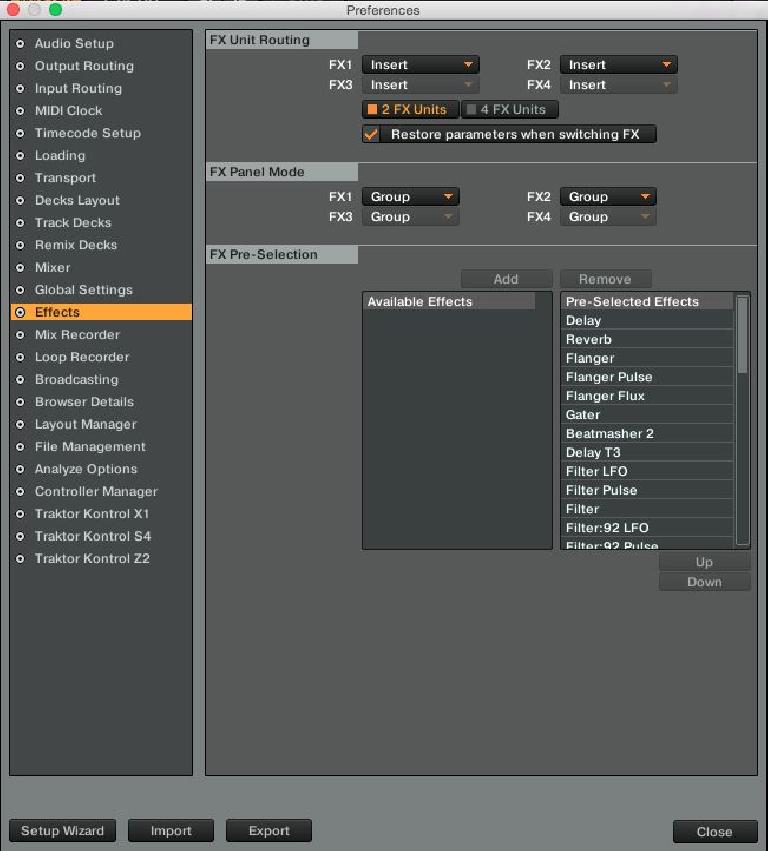 On one FX Group, choose the BeatBeatmasher2 in the first slot, the LaserSlicer in the second slot and the + Strrretch (slow) in the third slot. This combination of FX can be used to produce trippy stretched out FX that can compliment techno sets. Try slowly turning on each FX on within the group one at a time, and adjusting its parameters to learn what each individual FX sounds like. Once you're comfortable with each effect on its own, try turning on each FX and slowly turning up the D/W so the entire chain is heard together. Adjust each parameter individually and try turning the FX within the chain on and off. Keep adjusting and experimenting and turn off the entire chain by dropping it out (with the ON button) or slowly bringing down the D/W of the chain.

Any FX chain that involves delay works great for techno and the BeatSlicer is a useful effect for creating rhythmic interest. In one FX Group, choose the BeatSlicer in the first slot, the Filter:92 LFO in the second slot and the Delay in the third slot. I tried placing the BeatSlicer around eight o'clock and the Filter:92 LFO and Delay around 2 o'clock. Start with the D/W of the chain at zero and slowly bring up the D/W level until the FX chain is audible. Practise adjusting the parameters of the three FX, or simply use the D/W to mix the entire chain in and out of the mix.

The Beatmasher can be used to create staccato snare fills, and Reverb is placed in this chain to add ambience to the sound. To create the chain, place the Beatmaster2 in the first slot, Formant Filter or Peak Filter in the second slot and the Reverb into the third FX slot in a group. In a minimal section of a track with claps or snares, bring the D/W level of the chain slowly up and adjust the level of the Beatmasher2 until it catches the snare or clap. I find it's best if the Reverb is set to a specific level when the chain is in use, as adjustments to the Reverb make a big difference in the overall sound. Use the Filter to create new rhythms and patterns and play with the snare or clap. Try adjusting the D/W level, and then re-adjust each parameter again within the chain. This is quite a fun chain to play with that can add a lot of interest to minimal tracks.

Traktor gives DJs the power to introduce new sounds that can give sets an original flair. Take the time to carefully explore each effect and learn what its capable of! With a little practise, soon you'll start to receive compliments on tastefully placed effects in your sets.