Language
It may not be common knowledge, but did you know that Ableton Push can give you deep control over your third-party plug-ins? Tadhg Leonard shows how.

When Push was released with Live 9, it didn't take long for people to realize that it was a game changer in the world of MIDI controllers. So much so in fact that it is rarely referred to as a MIDI controller but as an '˜instrument' that gives users unparalleled control over Live. In fact, Push's LCD screen gives users the ability to control many aspects of Live without having to look at their computer screen.

As good as the Live's instruments are, many of us have our own repertoire of third-party plug-ins that we can't live without. For obvious reason, third-party plug-ins aren't as deeply integrated with Push as Live's own devices. Therefore let's have a look at ways of setting these plug-ins up so you can control them directly from Push without glancing at your computer. In particular, we will look at utilizing Push's LCD screen to give you instant and easy access to any of your plug-ins parameters, which is of course especially important during a live performance.

Configuring your Plug-in with Push

To start, we must first configure the plug-ins parameters that we would like Push to have control over. For this example, I will be using LennarDigital Sylenth as it is one of the most powerful synths in my arsenal, capable of producing many different types of sounds.

Drag the plug-in onto a MIDI track in Live and click the arrow button on the plug-ins device header. The configure button now appears, so click it and open up the plug-in's GUI. Now it is simply a case of selecting each parameter from the GUI that you would like to appear in the device's panel. You can add as many parameters to the panel as you like, all of which can be viewed and tweaked through the LCD screen on Push.

Some people may be tempted to group the device at this stage and map the parameters to macros. However, if you do this a value of 0-127 will appear on Push and not a value specific to that parameter. For instance, if I leave Sylenth's LFO1 wave select control unmapped then I will be able to see the different wave types on the LCD screen when selecting the wave type. 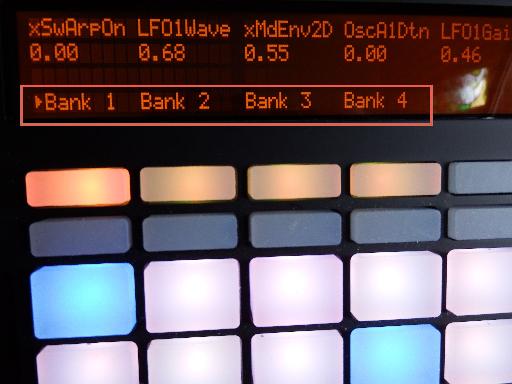 Tip: It is a good rule of thumb to arrange the parameters into groups of eight when configuring the device depending on what type of parameter it is. For example, in this case the ADSR controls of the two envelopes in Sylenth make up one bank, LFO 1 controls make up another, and so on.

Now that the basic setup is complete, let's have a look at more of an advanced tip of optimizing your plug-ins for live performance. When using Sylenth with Push, I like to be able to switch between my favorite presets or patches on the fly without having to look at my computer. One of the best ways to achieve this is to use a chain selector within an instrument rack (that is then controlled with a knob on Push). Let's have a closer look.

Turn the plug-in that we configured earlier into an instrument rack by clicking on the device header and pressing Command-G. Click the Show/Hide Chain List button in the rack, and you will now see the plug-in in the chain list. Create seven different instances of it by clicking on it and duplicating (Command-D). Open up each instance and change each one to a different preset inside the plug-in. Rename each one accordingly.

Now it's time to spread them into different chain select zones. Keep the first instance at 0 in the zone editor, move the second to 1, the third to 2, and so on. When finished, map the chain selector (the orange marker in the chain select ruler) by right-clicking it and choosing '˜Map to Macro 1'. Now click the Map button in the instrument rack's device header and set the max value for the chain selector to 6. This way the selector (macro 1) will toggle through the seven different presets evenly when you turn the knob on Push. 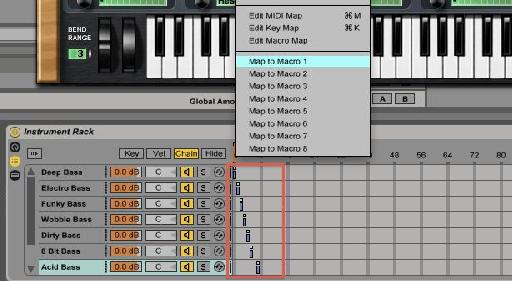 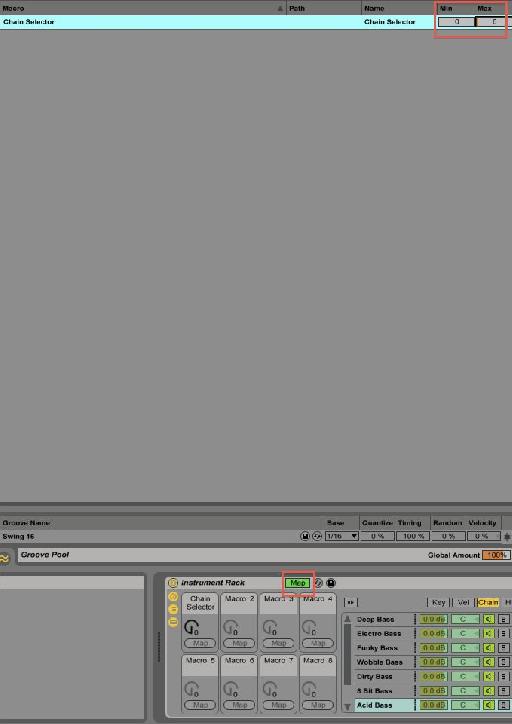 Now comes the clever part. To avoid looking at the computer, we need the LCD screen on Push to be able to tell us which preset we are choosing. This is where the other seven macros in the rack come in. We are going to use them, not to control anything, but instead to display info regarding the preset that we have currently selected. In the instrument rack, right-click Macro 2 and select Rename. Name it the same as the first preset in your chain. Leave the macro dial at 0. Now rename Macro 3 the same as the name of your second preset in your chain and move the dial to 1. Continue this process until all the macros are renamed to the relevant presets and the dials moved accordingly. 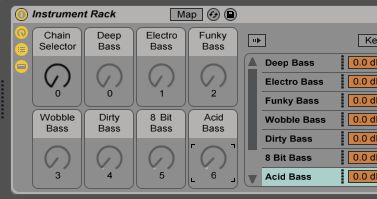 Now open up the instrument rack on Push by pressing the Device button and you will see the macros pop up on the LCD screen. Macro 1 can now be used as the chain selector to select between the seven different presets, while the other seven macros display the name and number of each preset. Therefore you know instantly which preset you have currently selected while playing live. All without using your computer or having to change track on Push. 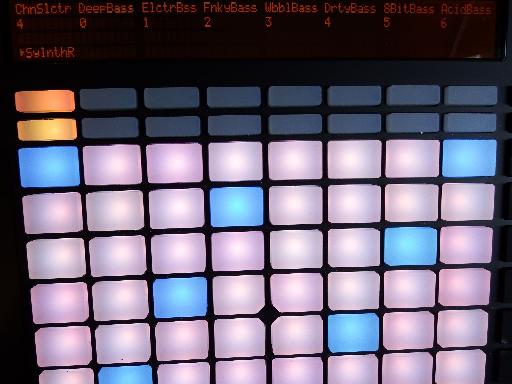 You can still tweak all the parameters for each preset by hitting the In button and selecting the relevant one. Any tweaking of parameters will only affect the chosen preset. For easy recall in the future, save the rack as per usual. The rack along with all our custom settings can be accessed now through the Add Track button on Push. 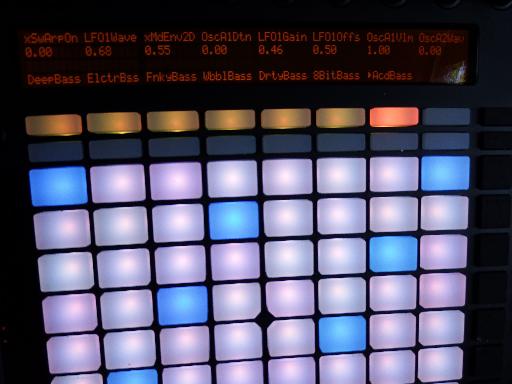 This method can of course also be applied to Live's own instruments and FX and is one of many great ways of getting the most of using Push live. The way in which its LCD screen can be utilized like this is one of the many reasons it stands head and shoulders above other MIDI controllers when performing with Live.