Language
iZotope Neutron brings intelligent analysis and automatic mixing functions to the mixing process. Here we look at the Masking Meter in this new plugin which solves frequency masking issues.

iZotope’s latest mixing plug-in, Neutron, is more than just a Channel Strip with a collection of useful processors. Of course, it is that, with its static/dynamic EQ, and single/multi-band Compressors (x2), Exciter, and Transient Shaper,  not to mention a choice of output Limiter types. But its real claim to fame is its suite of intelligent analysis, display,  and auto-mixing functions.

These include Neutrino, an automatic 32-band Spectral Shaper, which applies a light finishing touch to each track, and Neutron’s signature feature, the Track Assistant, which analyzes each track, and creates an appropriate processor chain automatically, making good starting-point settings that the mixer can then tweak further, to taste.

And then there’s the Masking Meter, an extremely useful display that helps make quick work of dealing with masking problems in a mix. 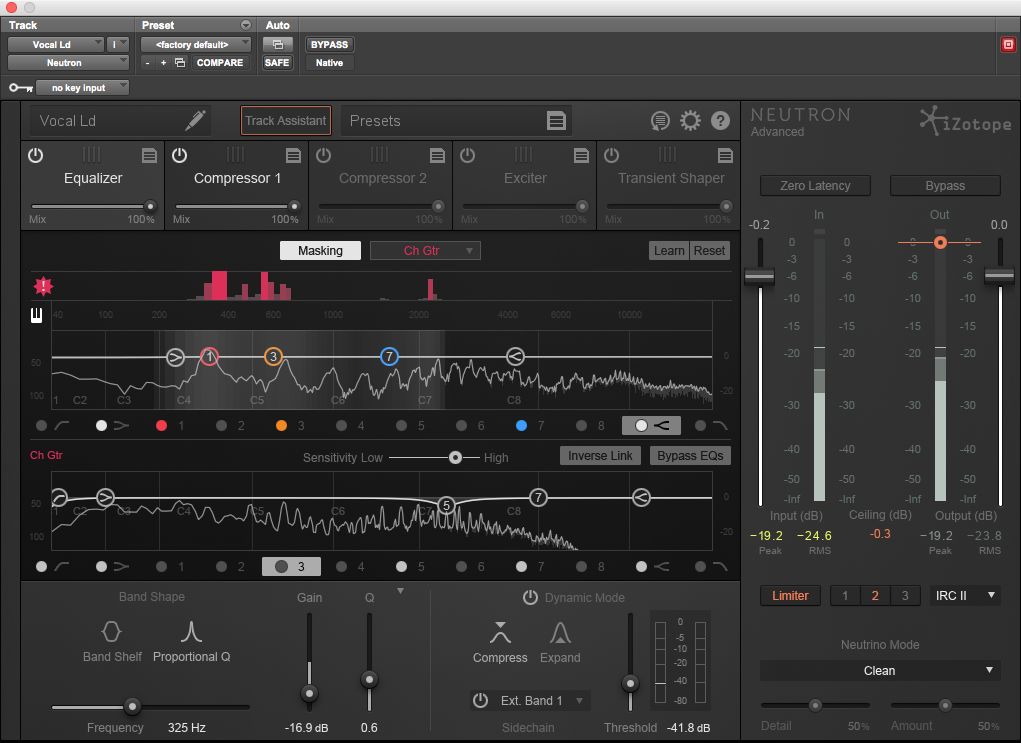 As more experienced mixers know, masking is when certain frequencies in a track are covered up by those same frequencies in another track—the result can be a part that doesn’t cut through the mix as well as it could, or even has its tonality altered by being masked at particular frequency ranges. When this change is detrimental to the track/mix, then the mixer has to either EQ the masked track to compensate, or search out the track that’s most responsible for the problem masking, and apply the EQ there.

While mixing mavens may be able to identify the problem frequencies by ear, thanks to years of experience, the process can still often be tedious and time-consuming. But the Masking Meter feature in Neutron’s EQ module can speed things up quite a bit. When it’s activated on a track that’s subject to detrimental masking effects, it lets you display a second track—the one you think is the likely culprit—in the same plug-in window. As the music plays, the display dynamically shows the frequencies where masking is occurring—you can then apply EQ to either track right in that same plug-in window (another nice convenience, especially for people with smaller monitors).

Here's an overview of iZotope Neutron:

Joe Albano is the trainer for AskAudio Academy's course on iZotope’s Neutron plug-in. The course delves into all the intelligent mixing features, as well as covering the individual processors in detail. Over and above those terrific processors themselves, both novices and experienced mixers should find something useful in Neutron’s intelligent mix functions, and the new course should help them get a handle on everything this excellent plug-in has to offer.

Learn more about iZotope Neutron in the AskAudio Academy here.