Language
Propellerhead Reason is chocka full of hidden features and functionality. In this tutorial G. W. Childs shows how to make a melodic pattern in Thor that changes pitch dependant on the keys you press.

The ability to trigger phrases, or melodies from a keyboard, similar to an arpeggiator is being used more and more frequently. Thankfully, with Rack Extensions (like Predator RE, from Rob Papen) it's easy to do this within Reason. But, what a lot of people don't realize is that this ability has been in Reason for a long time, through Thor's sequencer.

In this tutorial, I'd like to show you how to make a melodic pattern on the sequencer that will key scale (change pitch) based on the keys that you press on your keyboard.

Let's start off by setting Thor to its default patch by simply right-clicking on Thor and selecting 'Reset Device'. This zeroes all the knobs and keeps us in a simple environment that we can build without worrying about stepping on programming work. 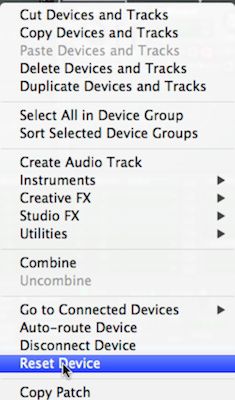 Now, we have a very simple patch, and this is perfect for what we're about to do next!

In Thor's sequencer, at the bottom of its interface, set the Sequencer Mode to 'Repeat', and when you're ready, press the Run button. Before doing this, I'd caution you that the original stream of sound coming from Thor's sequencer can be a bit… obnoxious, when not programmed. Make sure your volume is down!

Now that the sequencer is running, use the 16 knobs to alter the note of each sequencer step.

If you don't want all the steps to play on the sequencer, or you want a rest in your sequence, on certain steps, deselect the red box that corresponds with the step that you do not want…

For this particular exercise, I'd suggest sticking with lower, and higher octaves of the same key, like C3 on one step, and C4, on another step. This way, when key scaling is active, we won't get any weird notes that don't work in the song. Remember, every note within the sequence is going to transpose based on what key we press!

Also, you don't have to do a 16 step sequence! Using the Steps knob, you can choose to have Thor's sequencer run at 8, 4, 1, whatever you choose!

Step 3 - Bring in your Keyboard

On the Modulation Routing Table, create a line that has MIDI Key > Note (Under the MIDI Key Sub menu for routing) as the Source, with a 100% send amount to Sequencer > Transpose. With this command, we're telling Thor to transpose the sequence all the way to the note that's being played on the keyboard.

But, in order for the sequencer to trigger with the press of a key on the keyboard, like an arpeggiator, we still need to set up a command for this, too. To do this, create a line that has MIDI Gate (Under MIDI Key > Gate) as the Source, with 100% amount going to Sequencer > Trigger (Under Sequencer- Trig).

Finally, to keep from having a MIDI key overlap what the sequencer is playing on a pressed key, disable the Note Trigger for MIDI on Thor's main faceplate. 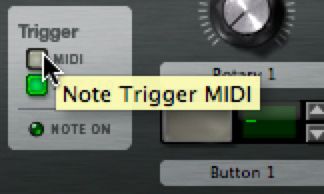 Okay, if the Sequencer is still set to Repeat, when you press a key, you should hear your sequence being played, but at the root note of whatever key you're currently playing on your MIDI keyboard, or from On-Screen Piano Keys (F4). The beauty of this trick is that you end up getting a highly rhythmic patch that can play cool bass patterns that scale to the key you're playing. This saves a lot of time in programming, copying and pasting within Reason's main sequencer. And, the patch can be saved later for other songs, with the bass pattern you created!