Language
G. W. Childs delves into the dark side (not really...) of Propellerhead Reason and uncovers how Redrum can actually be used to create melodic sounds and phrases.

Redrum, the ancient drum machine from Reason is a proven, workhorse for most percussive needs, with a built-in sequencer and tons of automate-able  parameters that, when automated, can create some real mayhem, or cool sonic textures. Because the drum channels of Redrum all have some kind of pitch control for sample playback, I thought it would be fun to explore using Redrum as a melodic device. As pitch can be automated independently for each of the drum channels, much like many of the new vintage-esque drum machines appearing as hardware, on the scene.

In Reason, I bring up a Redrum drum machine, and reset the device, so that I'm starting with a clean patch, no samples currently loaded! 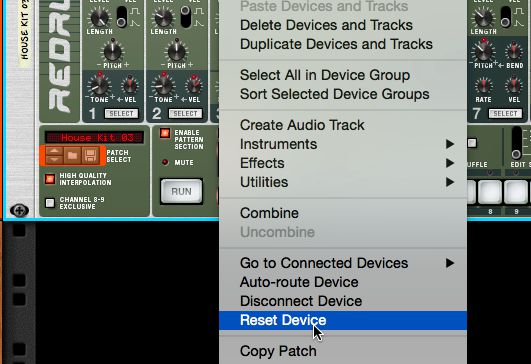 Next, in a clean Redrum, I'll press the Browse Sample Button on Channel 1. This will open the Browser on the left. Within this Browser, I'll locate the Reason Factory Soundbank, and then double tap NN-19 Sampler Patches. 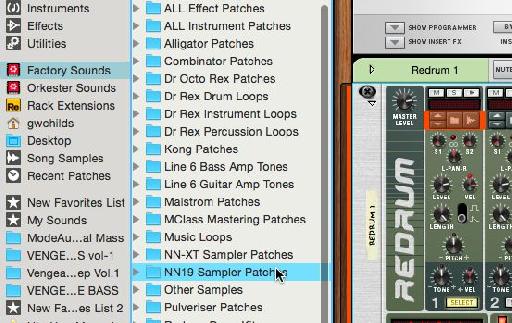 Within the NN-19 Sampler directory are tons of old, lo-fi synthesizer samples. These are great fodder for melodic madness in a drum machine, such as Redrum. I'll double-click the Synth Raw Elements, and then locate the Ensoniq SQ80 Samples/ SQ_Pulse C1.aif. 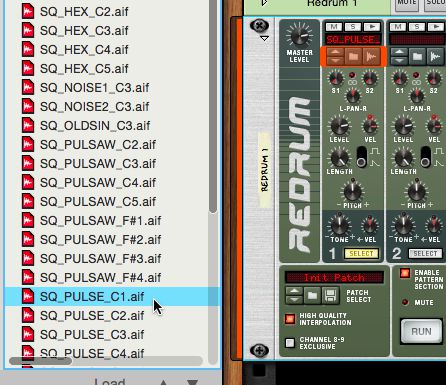 Now, if you try running a sequence with this sample, as is, you probably won't like what you hear. The decay of the sample is longer than the standard electronic drum, and will seem to overlap, when played in a pattern. To get this long release under control, I'll pull back the Length knob, which determines whether Redrum plays a whole sample, within its channel, or a portion. By pulling this knob back to a length of 46, we'll have something easier to play with. 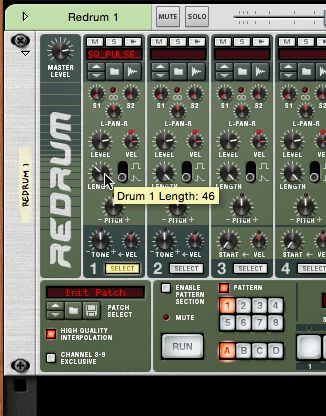 Now, on my sequencer, I'll reduce my tempo to 80 BPM, and set my loop points for two measures, starting at measure 1. 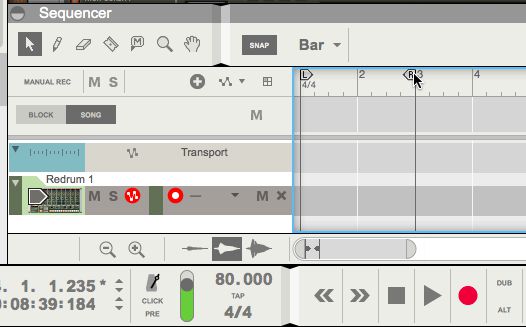 Next, I'll record a quick pattern in the sequencer with my MIDI controller. I'll just tap out a nice pattern like this... 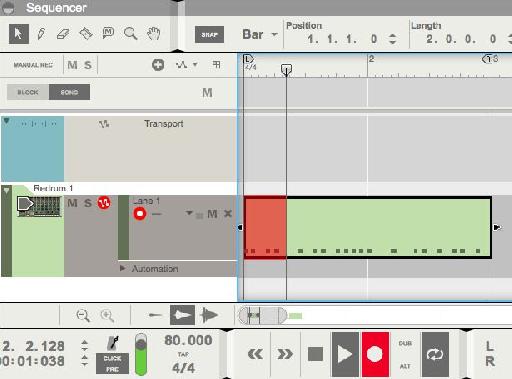 Now, I'll right-click on the Pitch knob of Channel 1, and select Edit Automation. This will cause a secondary channel to appear under the recorded sequence. 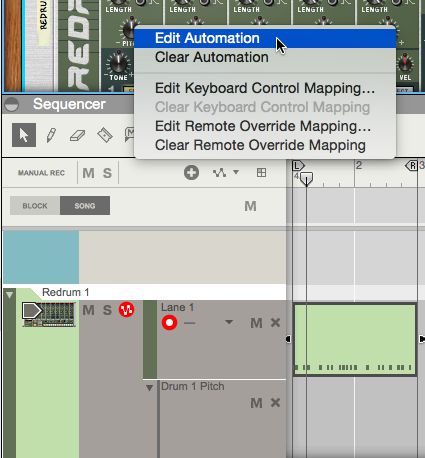 Next, I'll create a duplicate copy of the clip I recorded, and extend my loop points to where they are now covering four measures. By giving myself more space to work with the pattern I created, I can now start devising a progression that can play out over a longer period of time. 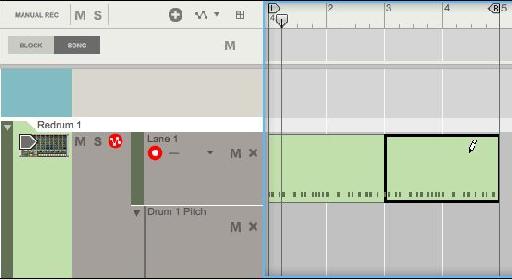 Alright this is where things get fun! I'll double-click in the grey area of the Drum 1 Pitch automation lane, so that a new clip appears. I'll drag the thumbnail of the clip out so that it now covers the entire four measures of my sequence. 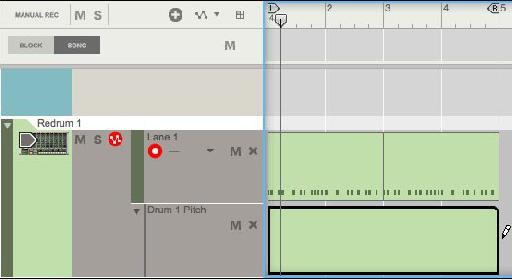 Now, I'll double-click on the new, empty automation clip, and go in and edit my pitch until I get a melody, or progression that works for me. You'll notice in the automation clip, below, that I'm going very simple. Take a listen to what this sounds like! 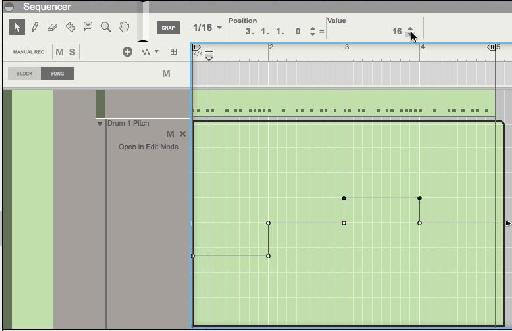 What appeals to me about working this way is that I can start off with a very basic pattern, and then let that pattern go repeatedly, while I determine the pitch that the pattern plays out at over a period of time. This is a great way of working if you're trying to write in a particular cadence and want to maintain it throughout the song. But, what's even more incredible is that I still have 7 other channels of Redrum to go! That's 7 more melodic instruments with the way that we're working. Let's add in another sample!

Now, let's equip Channel 2 with another synth sample so that we can build up our arrangement. I'll browse, again, back over to the SQ80 Samples. This time, I'll choose SQ_OLDSIN_C3.aif, a sine wave played in a higher register, giving us an almost bell-like quality. 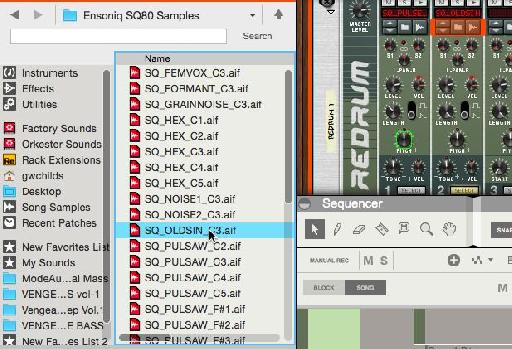 Alright, Channel 2 is loaded, now let's record a pattern. This time, I go with something that's a little more energetic and that plays around the existing pattern. To make things easy, make sure that you keep Q Record on, so that you don't have to go back and manually quantize, later! 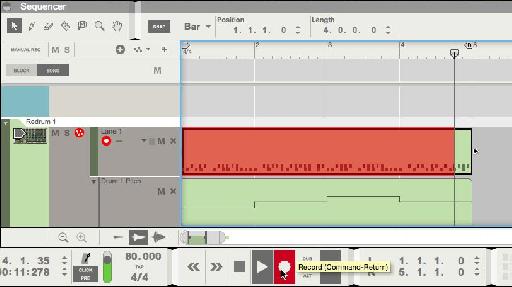 And, of course, once we've got the basic pattern in, I'll create another automation clip that extends the length of my recorded pattern, and start editing, till I get a counter melody that works with my initial channel. Or, if I feel really clever, I'll just copy my initial automation clip, down to the channel 2's pitch lane, and edit what's in this clip, to save a little time. 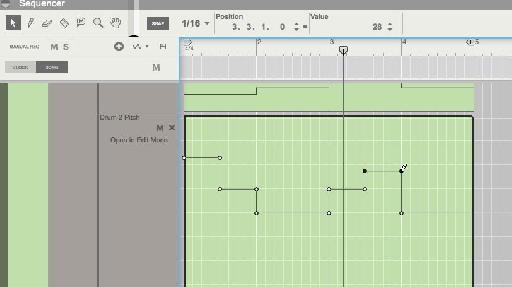 Crazy, right? We've got two instruments going on inside one drum machine, in Reason. The cool thing is: Samples take almost no processing power whatsoever in Reason. We can take advantage of this now, by adding in some big effects, or even other synths, if we want. Or, we can just keep adding to the arrangement of instruments we've been collecting within Redrum. We can even add drums!

Another thing that's awesome about using Redrum like this, is that we can continue to copy the initial patterns we recorded out through the entire length of the song, and just keep altering the pitches. For example: I'll add another two measures on for both channel 1 and channel 2, now I'll create new pitch automation clips for both. Check it out: New Chorus, but with drums, and it's all the same Redrum. Listen, I even added effects, chorus, and drums! This is all the same Redrum! 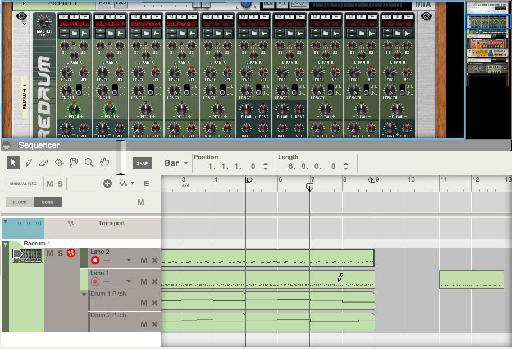 As you can see, a simple shift in perspective can make a simple instrument that you've probably used for years, like me, into a totally new powerhouse of an instrument that barely uses any CPU, and has tons of samples available for it, new and old. You've got to love Redrum... and Reason!