Whatever kind of music you are working with, iZotope's Ozone has the tools to master it sympathetically. Here, Joe Albano dives into the Vintage modules to show you exactly what they offer.
Learn iZotope Ozone in the AskAudio Academy.

iZotope’s Ozone is well known as an all-in-one processor for Mastering applications, incorporating a collection of modules that includes everything from basic EQ and multiband compression to an exciter, imager and loudness maximizer. But despite the intended purpose of this capable processor, Ozone’s tools can be equally useful for many mixing applications as well. Of course, iZotope offers many other plug-ins specifically targeted to mixing use, including Neutron (with its intelligent mix options), but Ozone’s modules also have a great deal to offer at that stage of production. Another aspect of Ozone that people might be less familiar with is its inclusion of several Vintage modules, which add the option for applying some processing with a little analog “character”, along with the more general-purpose clean EQs and dynamics tools.

Ozone has four Vintage modules on tap, though three of them are currently only available with the Advanced version of Ozone. The four are Vintage Tape (available in both versions), Vintage Compressor, Vintage EQ, and Vintage Limiter. These are modeled after analog hardware processors - some are emulations of specific hardware units. They don’t present the usual photorealistic front panel graphics that most modeled effects do, and on the surface they mostly don’t make a point of referencing the original hardware that inspired them, which I think makes them easy to overlook in the crowded field of virtual vintage toys. But they still bring classic analog character to the party, and are worth taking a look at. 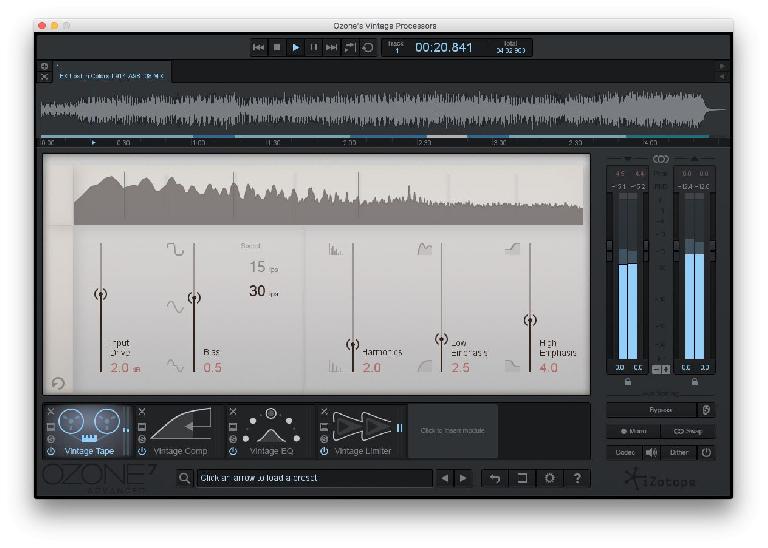 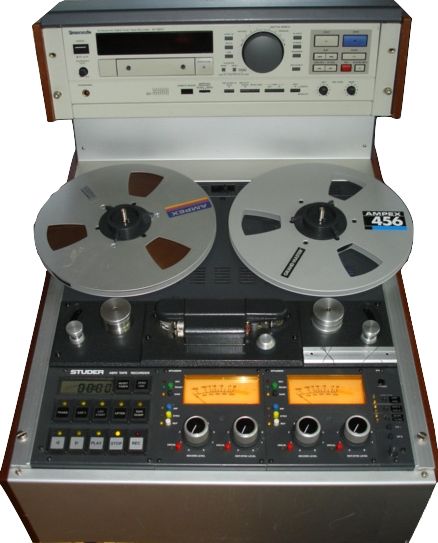 Vintage Tape offers iZotope’s version of the classic analog tape saturation effect. It’s modeled after a Studer A810 two-track (remember Ozone is primarily a mastering tool). As fans of analog sound know, recording on analog tape always included a number of artifacts that, while technically flaws, nonetheless enhance recordings in a desirable way. When recoding levels are pushed into the red slightly, the wave is very gradually flattened, adding very subtle odd (and even) harmonic distortion, and at the same time, levels are slightly compressed. This gentle distortion and compression is tape saturation, a subtle added warmth and presence, similar to what you get from tubes but with its own distinctive character. There’s also some additional warmth from what’s referred to as a tape machine’s “bass bump” - a low-frequency bump dependent on tape speed.

The Vintage Tape module provides controls to fine-tune these effects - as you might expect, they’re subtle (as they should be), but they offer a nice degree of flexibility, especially when using the module on a full mix. There are options for two simulated tape speeds (15 and 30 ips) and selecting different speeds shifts the frequencies at which distortion and the bass bump occur. There are also controls labelled Bias and Harmonics. On a real tape machine Bias is a supersonic frequency added in to make the recording more linear: it affects the distortion aspect of saturation, especially at high frequencies. Tape saturation tends to produce mostly odd harmonics, but different bias settings may add in some even harmonics to the mix - the Harmonics control allows for fine-tuning this. And low-and high frequency emphasis sliders tweak the bass bump and overall high-end response; overall these controls let the user emulate a wide range of tape setups.

For years after digital recording took over, engineers still often mixed down to tape or recorded some instruments - primarily drums - to tape before dumping them into the DAW, to enjoy the benefits of tape saturation, and now processors like the Vintage Tape module offer that sound with a lot less fuss and bother. 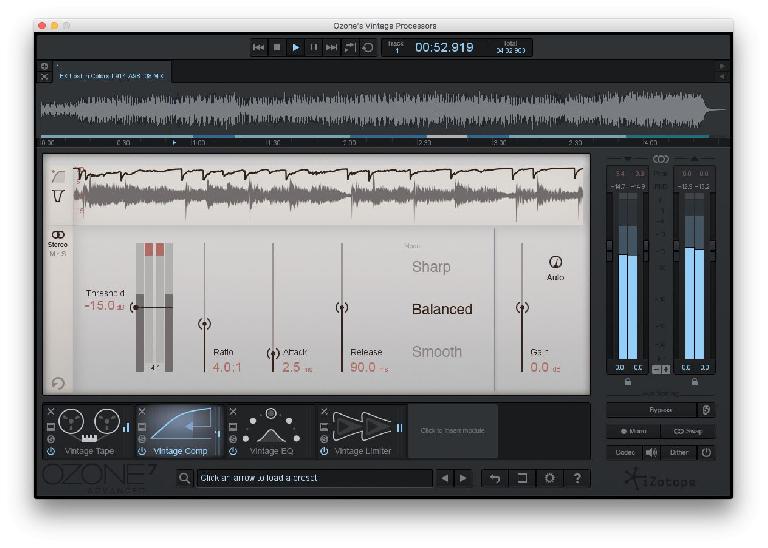 The Vintage Compressor module doesn’t claim a particular hardware model as its inspiration, but iZotope does point out that it’s a feedback design (a common design approach for analog units, but more difficult to implement ideally in digital emulations), and that it includes the “program dependent” compression characteristics that contribute significantly to the appeal of many of the most desirable vintage hardware units. With program-dependent compressors, the ballistics of the compressor’s response - the attack and release-change in response to the incoming audio signal. In a well designed unit, this could be thought of as having a compressor that constantly optimizes itself based on the audio, and this behavior accounts for the smoothness and “musicality”, especially when it comes to the release, of many of the most famous analog compressors.

Along with the usual compressor controls (see Fig 2), the Vintage Compressor includes three modes: Sharp, Balanced, and Smooth. Sharp emphasizes transients, keeping things punchy which is good for dense audio like a busy mix. Balanced, as the name suggests, is meant to provide the most neutral balance between transients and body. And Smooth slightly softens transients for a thicker sound. This could be just the ticket for getting fatter drum sounds on a stereo drum master or even on individual drums. 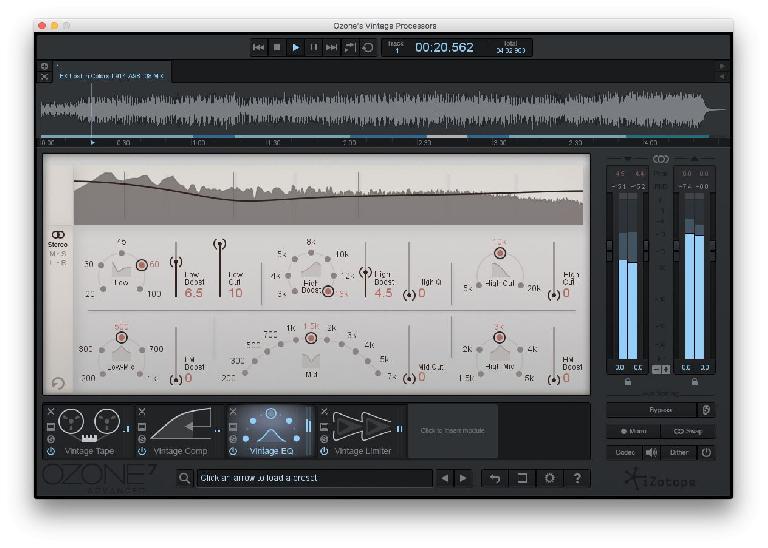 Vintage EQ is a more specific emulation of two classic analog hardware EQs, the Pultec EQP-1A and MEQ-5. The originals were passive tube EQs, known for their warmth and subtle, musical curves. The EQP-1A, probably the more famous of the two, is a two-band model which is distinguished not only by its warm tube sound but by its distinctive design: there are separate boost and cut controls for the same low frequency band. But due to subtle differences in these controls’ circuitry, boosting and cutting the same frequency doesn’t cancel out the EQ. Instead it can create a curve that combines a boost with a subtle dip just above it, which can allow for stronger but tighter bass without an overly tubby or boomy quality; this characteristic is highly desirable and much imitated (including in the regular Ozone EQ module), but the Vintage EQ module offers it in an interface that closely follows (for the most part) the controls on the original hardware units, allowing for dialing up EQ settings just as would be done on the real thing.

The lower panel of the Vintage EQ models the MEQ-5, which adds midrange EQ to the top-panel’s EQP-1A high and low frequency bands. In the real world the two were often used in conjunction, and the pairing here provides for more flexible EQ, along with the modeling of the originals’ tube circuitry and legendary analog warmth. 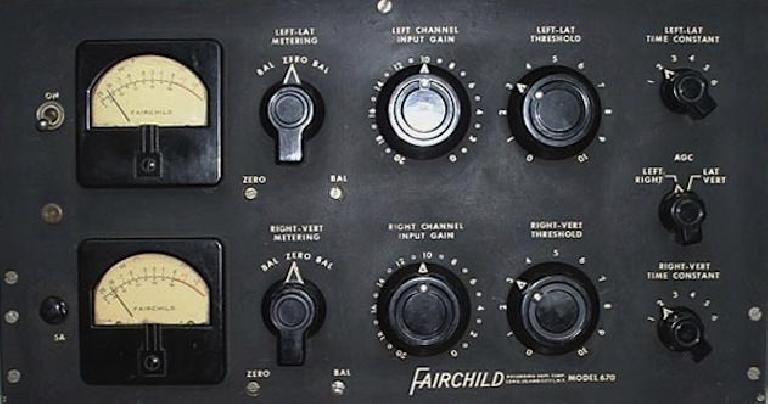 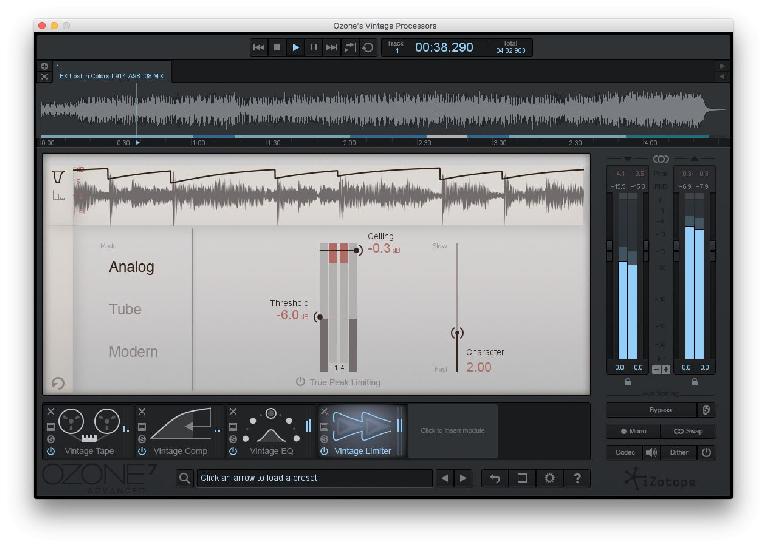 As a mastering tool, Ozone has no shortage of Limiter options, based on their own IRC (Intelligent Release Control) technology used in the Maximizer module for making the limiting as transparent as possible (as you’d want for mastering/maximizing applications). Analog limiters, on the other hand, may tend to add more character but are less effective at brickwall limiting. The Vintage Limiter module is iZotope’s way of addressing both of these needs. It combines an emulation of a warm analog compressor/limiter with a second stage of transparent IRC brickwall limiting to protect against digital overloads and serve effectively as a maximizer.

The analog side of the Vintage Limiter is, according to iZotope, loosely modeled after the Fairchild 670, a famous compressor/limiter. The original was a monster, chock full of tubes and transformers, all of which contributed to its classic analog warmth and presence. Vintage hardware units are rare nowadays, and can often command stratospheric prices, but in its day the Fairchild was often used for mastering, particular for vinyl production thanks to its built-in M-S processing options (then labelled lateral/vertical-of course, Ozone offers the option for M-S processing in most of its modules, naturally including this one). Though it was also an excellent general purpose compressor, given the Fairchild’s common use controlling peaks ahead of a vinyl cutting lathe, it was a natural for iZotope to emulate for a vintage limiting character.

As with all Ozone’s limiters, the controls are pretty straightforward. The extra control here is the Character slider, which tweaks the analog aspects, presumably the contribution of the simulated tubes and transformers as well as the attack and release characteristics of the original hardware, with its variable-mu tube circuitry. And again, all that analog goodness is followed by the additional IRC limiter “circuit” for the clean brickwall limiting and maximizing needed in the modern world.

So while Ozone can be used for its primary purpose of modern transparent mastering processing it also has a lot to offer when some analog warmth, presence, and overall character is desired, and it can add these qualities not just to full mixes but to stems, drum submixes, and even individual tracks. I must admit when Ozone first introduced the Vintage modules, I wasn’t overly excited-they lacked the snazzy graphics and “vibe” of many other plug-ins that mined the same vintage territory. But after using them I began to appreciate what they brought to the table, even without those fancy front panels.