Using Headphones When Mixing? Here's What You Need To Know

Mixing on headphones can be useful and even necessary in some situations. But it brings with it a unique set of conditions and considerations. Joe Albano explains all you need to know...

With the advent of portable music players, more people probably consume the bulk of their music over headphones than ever. This is not a bad thing - headphones can provide an intimate, up-front listening experience, and of course they offer listening privacy, a factor appreciated by both the wearer and their immediate neighbors. But when it comes to the art of mixing, headphone monitoring comes with a number of caveats.

Monitoring for the Mix

One of the primary goals in mixing is to make sure that the track will sound good to all listeners, regardless of what kind of playback system they listen to it on - professional quality studio monitors, inexpensive home hi-fi speakers, live sound systems, car stereos - the mix must work well in all of these disparate listening environments. And that includes headphones, from full-range studio-quality phones to the cheap, tinny earbuds that come with many personal music players. 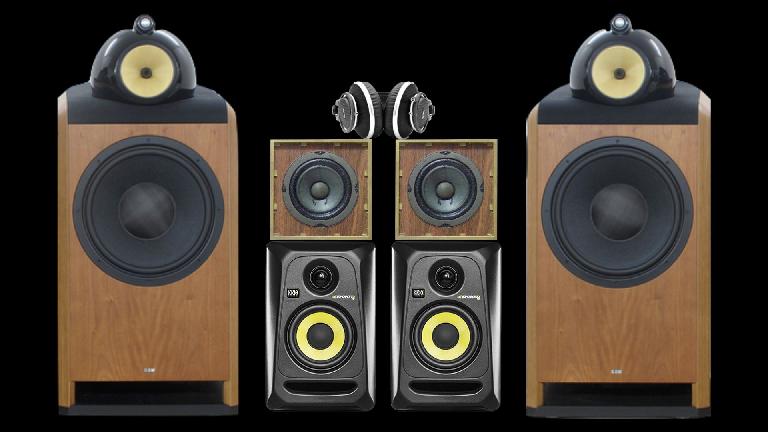 Mixers, naturally, check the mix - both in progress and the final version - on as many of these playback systems as possible, again, including phones. But during the mixing process it’s important to maintain a consistent monitoring reference, and 99% of mixers will probably suggest monitor speakers rather than headphones, thanks to differences between the experience of listening in speakers and headphones, and additional aspects of headphone use. Here are a number of things that any mixer should be aware of about headphone monitoring.

One of the key aspects of mixing is stereo imaging - the mix should have a nice, wide stereo soundstage, with some degree of front-back depth as well, for as close to a three-dimensional image as possible form conventional stereo speakers. But when it comes to the stereo image, the experience of monitoring in headphones is quite different from hearing the same mix over loudspeakers in a room. In phones, there may be more detail revealed, especially when it comes to background elements of the arrangement, intended to be barely audible under the main tracks, contributing to the overall density of the mix without calling undue attention to themselves.

Subtle parts like very light background harmonies, layered instrument doubles, extra percussion and the like can tend to stand out a little more in phones, as can some effects, especially those involving reverb and short delays. A very short doubling or light slap may provide a little extra fullness for a sound without really being heard as an effect, blending in with the inevitable short reflections in the listening room itself; but in headphones, that same effect might be much more noticeable as an added effect, rather than a subliminal enhancement.

There’s a technical reason for these differences in perception between speakers and phones. Now in theory, a stereo recording is made up of a left channel, intended for the left ear, and a right channel, intended for that right ear. But when listening over monitor speakers in a room, both ears hear the sound from both speakers - it’s unavoidable. This mix of channels - the left ear also hearing the right channel, and the right ear also hearing the left - is called Inter-Aural Crosstalk. It’s why the stereo soundfield from speakers is limited to the space between the speakers, rather than extending out to the sides beyond them, in a wider arc. It also contributes to a slight loss of detail (along with other room phenomena like reflections and comb-filtering).

But in headphones, there is no Inter-Aural Crosstalk: thanks to the proximity of each earcup to the corresponding ear, the stereo signal is heard as intended - left->left ear only, right->right ear only. That’s why headphones often reveal those more subtle aspects of the mix - like background parts and subliminal effects - that are much less clear in speakers. 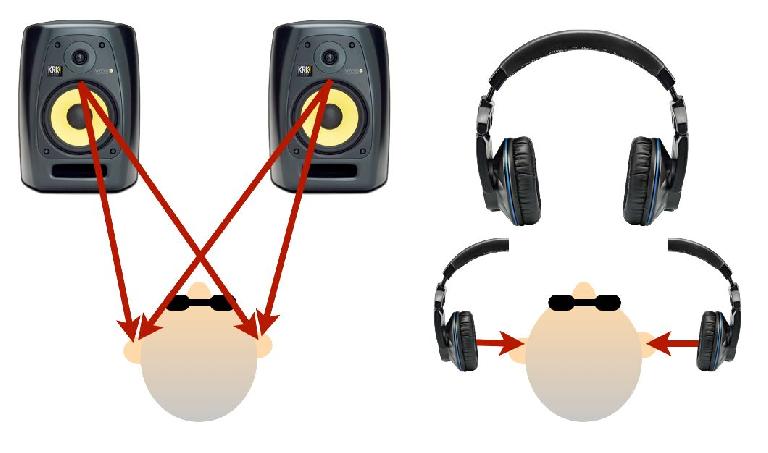 While this is a plus for the headphone listener, it should give pause to the mixer - if you do a mix in phones, balancing all the elements just so, it’ll sound fine for other headphone users, but when that mix is heard over speakers, a degree of necessary detail may be lost, and the mix may sound overly diffuse and muddy.

This is one of the reasons mixers mix primarily in speakers - the mix will sound proper over other speaker systems, and rather than suffering a loss of detail and clarity, it may gain some detail and clarity when heard in headphones. All the mixer needs to do is check that any differences in perception in phones are not detrimental, and make a few subtle tweaks for compatibility in both listening environments.

The same considerations come into play regarding an even more obvious difference between speakers and phones - the width of the stereo image. Of course, the mixer can’t control how listeners’ playback speakers will be arranged, but most assume normal spaced placement - something at least approximating the optimal 60° angle for stereo reproduction (though mixers always check the mix in mono as well, just in case).

But in phones, the stereo soundfield, rather than stretching out from left to right in front of the listener, is contained in the much more narrow space within the listener’s head. Stereo width and placement of tracks in a mix is a subtle, yet important contributor to the overall balance and clarity of the mix, and this is another reason why the headphone wearer’s perception on the mix is usually different - at least with regular headphones (some recordings utilize special techniques, like binaural processing, and some phones employ special arrangements of drivers to enhance the image, or project the soundfield outside the listener’s head, but that’s a rather small (and specialized) subset of the headphone experience).

Getting the bass right in a mix is a challenge in any listening environment. Even though speakers are the preferred option for mixing, all experienced mixers are aware of how a room can wreak havoc with the low end, thanks to Standing Waves, and take some steps to address this known issue. But headphones can also have low-end issues. Phones tend to sit a little differently on each person’s ears, and since the bass response is affected by the seal between the earcups and the ears, this can result in different bass response, even with the same phones, from one listener to another, or even with the same listener, if he fiddles with and re-adjusts the phones on his ears during a listening session; earbuds are also subject to this, though most of them don’t have very good low-end response anyway. 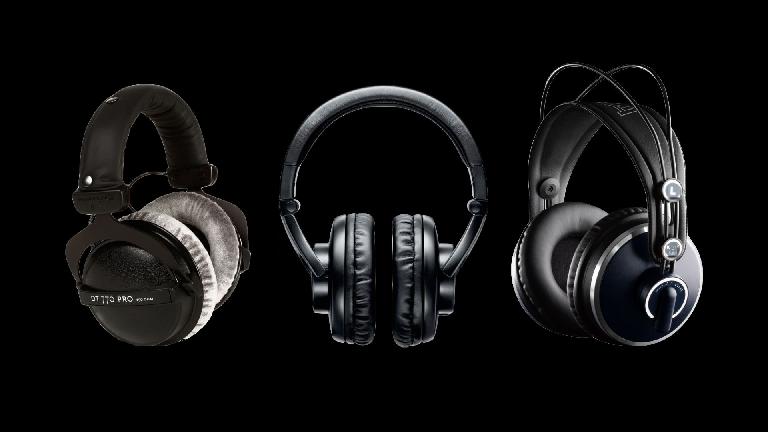 And once again, while the perception of bass in the mix may vary from room to room, the perception of bass may also vary from phones to speakers. Without the feeling of the bass vibrations in the room and the listener’s body - absent in headphone monitoring, even with phones that have good bass extension - there may be a tendency to overdo low end EQ if mixing in phones, which can then sound muddy or boomy over speaker playback.

Finally, there’s the issue of monitoring level. Again, most experienced mixers know enough to avoid working for long stretches at too loud a listening level (i.e. > 90 dBspl or so) without taking frequent breaks. Many mixers follow the recommendation of maintaining a consistent monitoring level of approximately 83 dBspl, occasionally checking the mix at higher and lower levels. But with headphone monitoring, it’s harder to calibrate listening level, and the lack of that low-end full-body impact can make headphone levels appear to be not as loud as they really are. Hearing damage initially occurs at upper-midrange and higher frequencies, and headphone listeners who crank levels, in an attempt to compensate for the lack of physical “thump”, can be at greater risk of potential hearing loss and tinnitus (ringing in the ears). 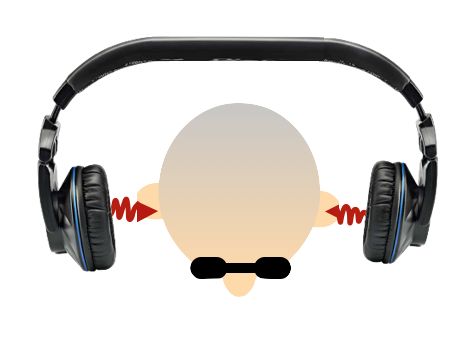 Despite all these caveats, headphone monitoring can be an important part of the mixing process. While many earbuds do provide fairly crappy sound, the best headphones (though they can be pricey) offer excellent, detailed, full-range audio, free of the potential colorations of the average room - as long as you’re familiar with all the relevant aspects of headphone monitoring and take them into account.

Learn plenty of mixing tips, tricks and techniques in the AskAudio Academy.

Solic
Excellent article. Thanks for clarifying many things.
Millennialaire
Very clarifying, thanks.