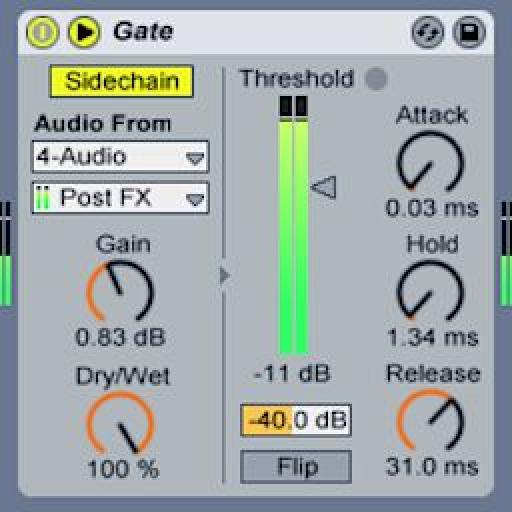 Language
Everyone loves delays, right? Well, Mo Volans takes his love of delays to the level of infatuation with this tutorial on using gated delay lines for some super hyped effects in Ableton Live.

Ableton's stock effects are as easily as good as a lot of third party products and if we are honest using them makes Live sessions run a whole lot smoother. The real trick is getting creative with the configurations we use.

In this short tutorial, I'll demonstrate how you can use a side-chain triggered gate in conjunction with a simple delay plug-in to create something a little more unusual than a standard delay effect.

We'll be working with a synth line here. It's pretty percussive and the loop works well. I want to add some delay but really want something different to a standard delay line. Let's look at a few things we can do to make an interesting effect.

You can hear the dry synth line in isolation below. Any processing you can hear at this stage is actually imprinted onto the sample, there are no processors running in Live yet.

Let's take a look at how we can add some energy here in four or five easy steps. You can make these sorts of moves with any patch to inject a bit of life when needed.

We'll start with a simple delay plug-in. This is basically Ableton's version of a stereo delay line. As the name would suggest, it's nice and easy to use with a clear interface. Even a beginner can get stuck into making delay effects here.

The delay is set up in a standard send / return configuration. This simply means that any amount of level can be sent to the delay line and its output will be mixed with the dry synth loop. 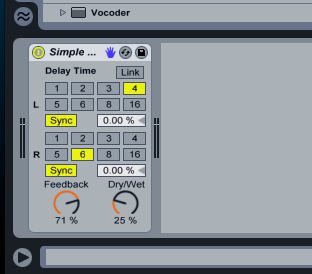 The simple delay is inserted.

I've made sure both sides of the delay are synced but use different musical measures, this will enhance the stereo effect created and introduce interesting cross rhythms. I also dialed in a pretty high feedback level. This ensured that there was plenty of repetition to work with.

The synth is mixed with a high feedback delay:

You can hear the result below, the delay sounds pretty good and adds a huge amount of space to the pattern. The only real problem is that it swamps the original sound to some extent and reduces the dynamics impact the dry version had. Let's see what we can do to solve this problem.

Set Up The Routing

Next up, I inserted a gate plug-in directly after our delay plug-in on the return channel. At first, the effect was pretty random, letting through various peaks as the delay did its thing. What I really needed to introduce at this point was some control. We'll do this by using some side chain routing. 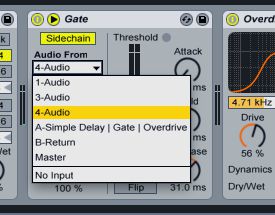 Side chain routing is done.

By activating the gate's side chain circuit and feeding it with a new 4/4 drum loop I was able to introduce not only control but also a pattern. The gate was now easy to set as the incoming kick drum gave me clear dynamic events to set the threshold to.

The final step was to add a little crunch to the delay effect itself. An overdrive plug-in was put to work here and inserted directly after the delay. The overdrive's internal filter was used to ensure that no low frequencies were treated and the effect wasn't overly bright. 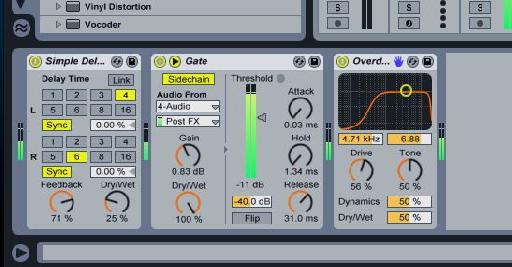 The synth with distorted / gated delay:

The final result mixed with the drum track:

With all the effects in place the new gated delay effect was mixed with the 4/4 drum loop introduced in the previous step. The result is a delay that sits well in the mix and matches the groove of our drum track perfectly!

StefanoMDj
This is a very nice article!
Thanks MO :D