Using synth on guitars? Yes indeed - it can be done, and more than that it can provide great results! Find out how in this workshop using the bx-subsynth Subharmonic Synth.

Let’s take a look at a really unique product called the bx-subsynth subharmonic synthesizer. Available from both Universal Audio and through the PlugIn Alliance, it’s based upon the classic dbx 120XP hardware unit. Taking it a step further, let’s examine its use on guitar and how it can help you get creative. 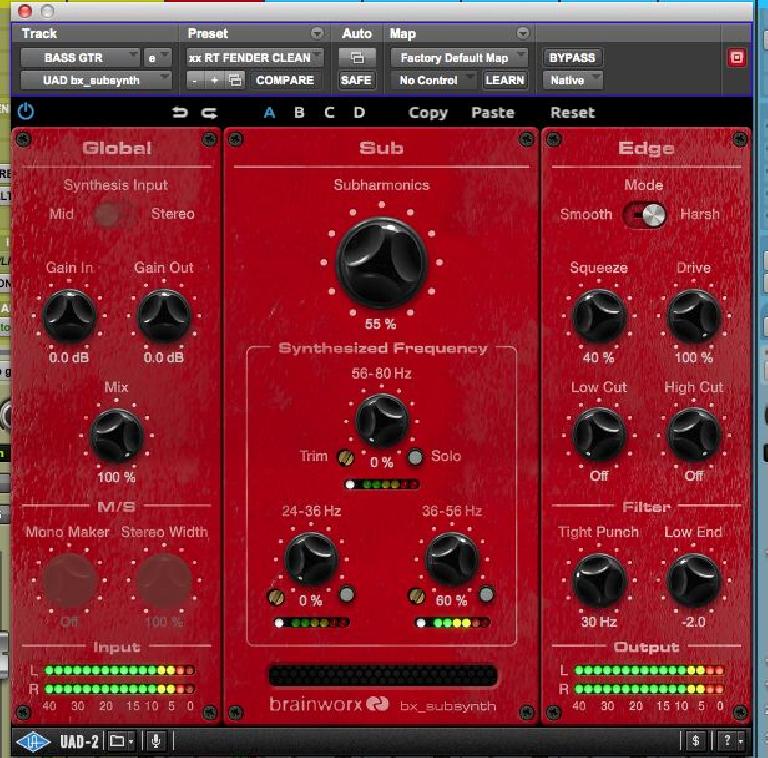 What Does It Do?

Fundamentally, this unit adds synthetic harmonics to your low end, adding what they call a Waveform Modeled note one octave below the source. As often happens these days, brainworx modeled the components of the hardware and added on a few extra touches to the plug in to increase its flexibility.

The mono/stereo plug in is basically broken down into three main section, each with several components. Global features a Mid/Stereo Synthesis Input slider, Gain In and Out (+/-20dB), Mix (wet/dry) and M/S (Mid/Side) with Mono Maker and Stereo Width. Sub features a large Subharmonics knob, and the Synthesized Frequency section with 24-36, 36-56 and 56-80Hz knobs, each with their own small trim knob and Solo button. Edge features a Smooth and Harsh Mode slider, and knobs for Squeeze, Drive, Low Cut and High Cut, as well as a Filter section for Tight Punch and Low End. At the bottom of the unit are Input and Output meters. Synthesis Input, Gain In, Gain Out, Mix, Mono Maker and Stereo Width are not on the original hardware unit. Also, when using it in mono, the Synthesis Input, Mono Maker and Stereo Width are not available.

While it’s fantastic on bass, I use it a lot on guitar in a variety of ways. For example, when tracking TV cues with a live drummer (which I do quite a bit), I like to use it to lay down single note guitar lines that have the bass an octave below. What it gives me as a player are heavy, sure notes that let you play cool lines. I like to play with different band frequency ranges, as each knob sets an output level for that particular band. 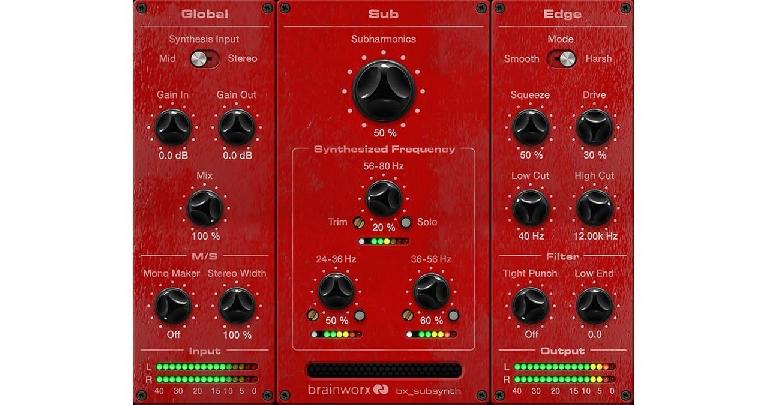 According to the manual, the processor searches for the dominant frequency in that range and synthesizes a suboctave from it. The large knob at the top is the master level of what you dial in on the individual knobs. So with guitar, I found myself mostly turning to the higher 56-80Hz range and pushing that up.

To dig in a little further and isolate what you're hearing, you can use the solo listen buttons on each range. Once pressed, it will mute the output of the other two bands. I haven't found the need to use those too much on guitar parts, however, as I tend to just dial in what sounds best with the higher range. I did use them later with bass and kick drums, where they help you ‘tune’ the subharmonic range.

Another way that I use this plug-in on guitar is to double bass lines with it. It's especially useful in funk and reggae, where it can thicken up the bass in a unique way. By doing that, it almost disguises the fact that there is a guitar happening at all.  What I mean is that you hear the bass line more discreetly, because the guitar with the effect on it adds top to the line in its entirety. It's especially useful if you take the time to exactly double (or come as close as possible) to the original bass line. It also can work as one single guitar part, covering the bass and guitar on the same track.

More cool guitar sounds can be had by pushing the Edge section, adding some overdrive and compression to the signal. By pushing up the Squeeze, you’re pushing down the transients of the signal and pushing up the Drive will add a crunchy kind of distortion.

I’ve also added this plug-in to distorted guitars, especially at the mix stage of the production process. This is where I would turn to the Tight Punch knob, which attenuates the lower frequencies and focuses punch at the cutoff frequency. It simply adds a more focused bottom. Finally, I would tweak the Mix (wet/dry) knob to get the blend just right between the original signal and the subharmonic signal.

Like anything else good, you have to be careful not to overuse it, which is too easy with this plug-in because it sounds so good. But with that in mind, there is actually nothing else quite like it to add added bottom punch to guitar parts.