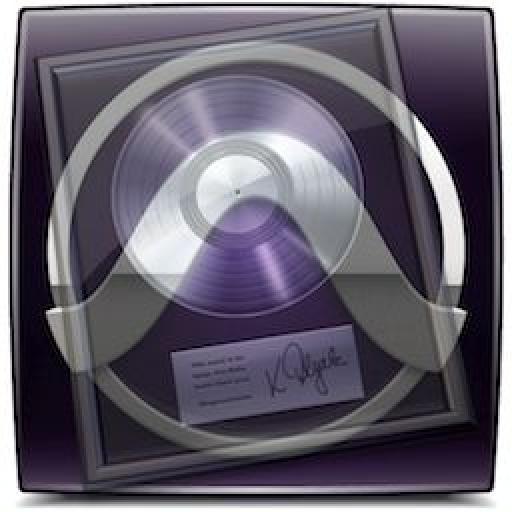 Language
The idea of using Logic Pro's Apple Loops in Pro Tools might feel counter-intuitive. But, these loops are a great resource which can be accessed and used for creative ideas directly in Pro Tools.

One of the key reasons Logic Pro is so popular as a creative DAW is the fact that you get 55 GB of content 'free' with the application, and this includes tens of thousands of royalty-free loops which match their tempo automatically to the project. In this tutorial we look at how Pro Tools users can access and use that content to extend its creative potential. GarageBand for Mac also has an Apple Loops library, and other Apple applications also install Apple Loops, so this tutorial is by no means limited to Logic Pro owners!

Logic Pro's loop browser provides an easy way to browse the thousands Apple Loops in the library, so we should look first at how to set up an equivalent in Pro Tools. Browser windows in Pro Tools provide a similar (if floating) experience:

Use Option-; to open the workspace browser

Double-click the folder called Apple - this will open a new browser window showing all the Apple Loops installed on your Mac. You may have folders for GarageBand, Soundtrack Pro, Final Cut Pro, iLife and Jam Packs depending on which applications you have installed. 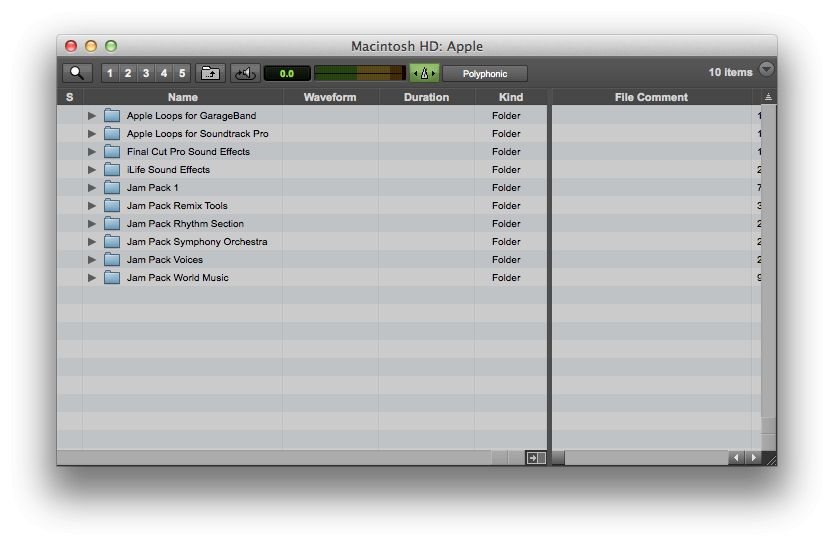 If you've used Apple Loops in either GarageBand or Logic Pro you will be aware that some are green and some are blue. The green ones are usually referred to as MIDI loops, the blue ones as audio loops. In actual fact the MIDI loop files also contain an audio version; you may have seen what happens if you drag a MIDI loop to an audio track in Logic Pro – the audio version of the loop appears. In Pro Tools, all loops in the library will appear as audio files irrespective of how they appear in Logic Pro or GarageBand. 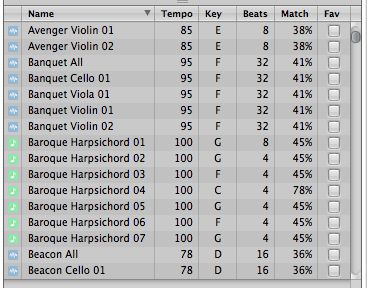 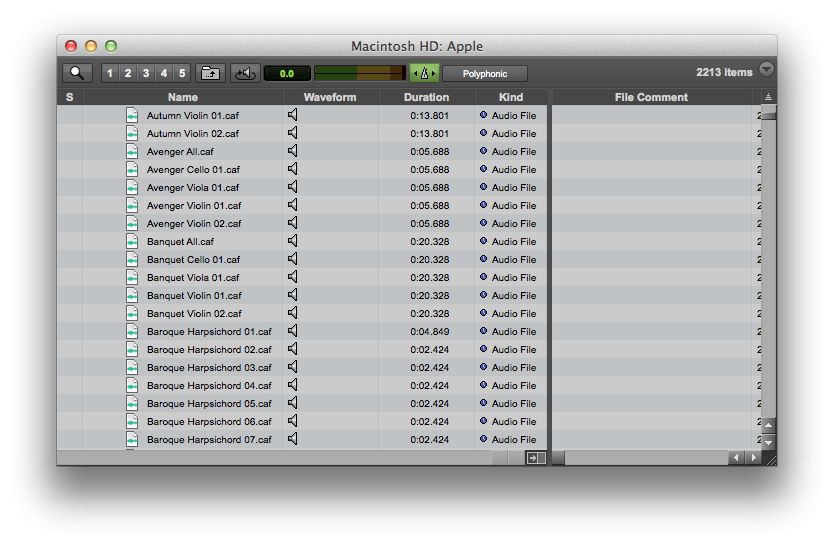 Close the original workspace browser window if you wish.

To bring the loop browser window to the front, use the keyboard command Option-J but be careful not to close it.

One of the great things about Apple Loops in Logic Pro or GarageBand is that they audition at the project tempo. We can replicate this behavior in Pro Tools by clicking the 'Audio files conform to session tempo' button. Now when a file is auditioned in the workspace browser (by selecting it and pressing the spacebar or by clicking the audition button) it is 'elasticised' – that is, it is analyzed for transients by elastic audio - and plays back at the session tempo. It is important to choose an appropriate elastic audio plug-in for auditioning at this point as this will impact on the track that is eventually created. Choose between 'Rhythmic' or 'Polyphonic' depending on whether the material you are auditioning is pitched.

The audition and the 'Audio files conform to session tempo' buttons in the browser window.

What's more, if the session is already running, auditioning the file will play it back from the first beat of the bar, so you can hear it how it sounds in context. Point to Pro Tools! So far so cool, but it's at this point that a little issue might rear its annoying little head! Apple Loop audio files often contain a few extra milliseconds of data, beyond the one, two or four bars you expect. You never noticed this in GarageBand or Logic Pro as it is simply ignored by those applications, but in Pro Tools you will notice! What you might hear when auditioning a file that has a beat or regular rhythm (so not important for 'beat-less' sounds like sound effects and atmospheres) is that the file auditions slightly out of time with the session, or when you drag the loop to the session it will be annoyingly out of time, due to the extra bit of audio on the end of the clip. What we need is a quick, accurate and easy way to trim the surplus so that the remaining audio clip plays perfectly in time.

Some audio files contain extra milliseconds at the end - in this case you can clearly see that the loop is not in time with Pro Tools as a result.

But first, before we worry about trimming the file, let's look at drag-and-drop. A key feature of Apple Loops in Logic Pro or GarageBand is that you can drag and drop them to the project automatically creating a track as you do so. In Pro Tools if Audio files conform to session tempo' is enabled, when you drag-and-drop a file from the workspace browser to the edit window several things happen:

To cope with that annoying extra bit of audio mentioned above, a few more steps are required but luckily, once you have the keyboard commands under your fingers, it is relatively painless. It also encourages the user to listen to and become a little more familiar with the beat structure of the chosen loop – always a good thing I would suggest!

Check you are in Grid edit mode (Option-4).

Check the Grid setting is something usefully musical like quarter notes.

Listen to the clip and identify a musical event that you are confident you know which beat it should be on. For a four bar drum loop for example, the first beat of the third bar would be a good one to go for!

Before - the red arrow shows the direction in which the Event Marker is to be dragged.

Using the 'Grabber' tool (Command-4) drag that musical event's 'Event Marker'  onto the exact beat it should be on. If the Apple Loop has no extra audio this might not even be necessary, and if it does the adjustment should only be slight.

After dragging the Event Marker to the correct beat.

Delete the unwanted audio at the end of the clip. One way to do this is to define the edit selection in the toolbar and choose Trim Clip>To Selection from the Edit menu (command-T). 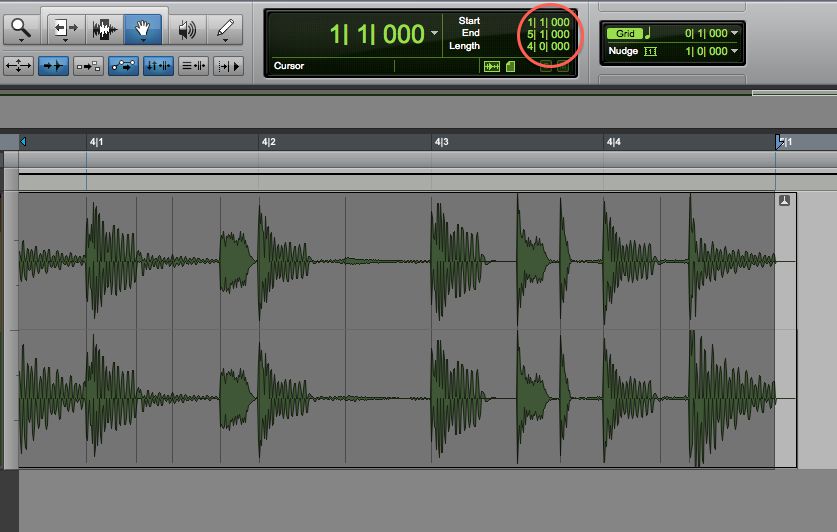 Defining an Edit selection in the toolbar.

If 'Link timeline and edit selection' is enabled then the edit selection defined above (say two bars) will also be the playback selection and you can test the timing of your loop by control-clicking the play button on the transport to enable loop playback, and then pressing the spacebar.

You may have noticed that one feature of Apple Loops that we haven't mentioned is their ability to change pitch as well as tempo, so this will be the subject of a future tutorial on the hub!

dellel
Is Apple Loops no longer apart of "Mountain Lion"? Do I need to download and install Garageband? The application store has many comments reagarding that Jampacks is no longer available. I'm confused.
thirdspace
Hi dellel

On a Mac you get Apple Loops with GarageBand, which is part of iLife, which comes free with every Mac. You also get a huge number of Apple Loops with Logic Pro (which are the loops that used to come on Jam Pack disks, now no longer available). If you have a Mac that does not have GarageBand, or Logic Pro, you can purchase them on the Mac App Store, or find an iLife 11 install disc on eBay.