So you've captured a great performance off the cuff, but didn't record to a click. All is not lost however, as Ableton's Warp feature can be used to correct timing mistakes even over a long time.

As a pianist, I love to be able to just fly at tempo that I’d like, play what I hear in my soul, and let the engineers figure out how to handle everything else. As an engineer, I like to have my piano on a click track, so that I can add in instruments, rhythmic effects and have reference for other performers. How do you find a middle ground? Recently, after recording myself in a freeform session on a piano, I had to salvage the performance that was recorded completely out of time. In this article, I’d like to fill you in on how I saved this performance, and actually made it better!

You know the situation, I’m sure! You’re playing the piano, and suddenly, you have an idea! Rather than waste the inspiration finding your laptop and tap tempo-ing to what you hear in your head, you just record everything out as it comes. This happened to me pretty recently. I had a moment, recorded it. But, didn’t record it to the click in my DAW, which leaves me with several disadvantages. If I want to produce this I have to get other players on, get my effects in, arpeggiators, and so on. Thankfully, I’m using Ableton Live! Live has a lot of bonuses when it comes to fixing up a recording like this that has a lot of timing ‘errors’ in it, by nature of what it is… an improvised piece.

Indeed, when you warp piano or other free form pieces of music outside of ‘clock time’, some of the humanity might be lost a little. But you can always remove warp points to free up some of the realism later.

This is handy, as I do not really want to try to edit the Warp Points of this piece to a host tempo of 120. Especially if it’s meant to be a slower performance. Once I know what the tempo is, I drag the original performance into the Arrangement view of Ableton, and disable the default warping that occurs on import.

Now, I’ll trim off the excess audio at the beginning of my recording, so that the first note hits right on the first bar. 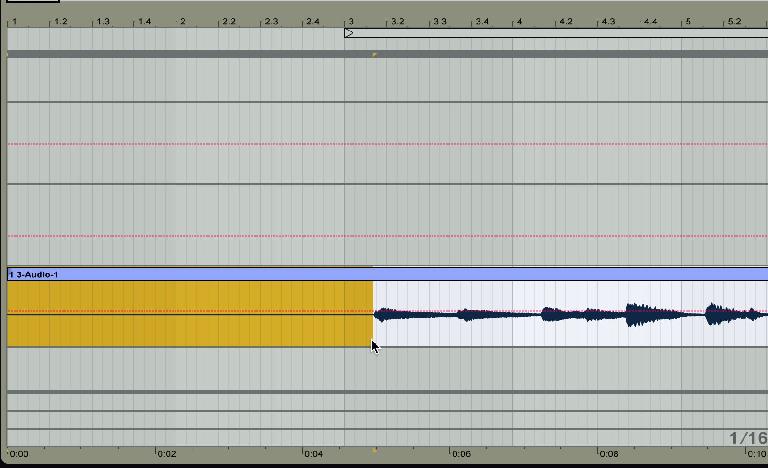 and move it over to the first measure in Ableton Live’s arrangement window.

Now that the piano starts appropriately, I need to start actually warping it! When I press the Warp button on the clip of the piano, I get a familiar question from Ableton:

I’ll go ahead and select Yes, which will place the clip back into warp mode, and even place the first marker for me. I’ll enable the Metronome in Ableton so that I have a reference for the timing I’m trying to achieve. 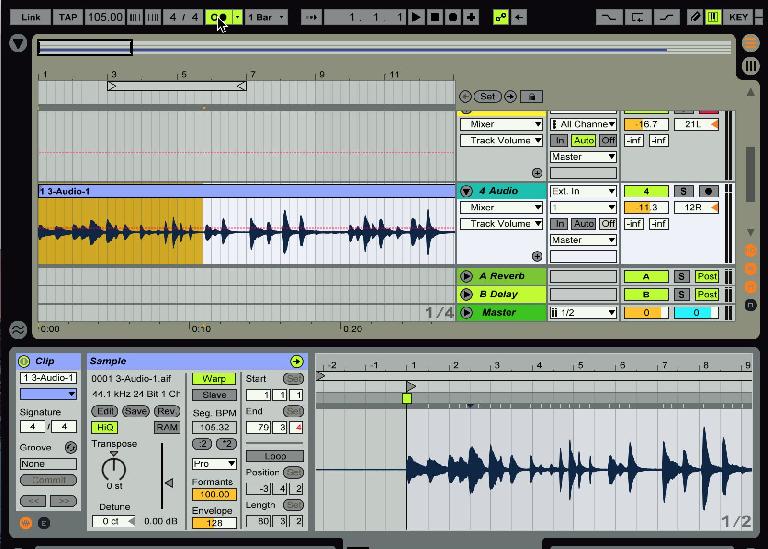 You’ll notice that the piano isn’t that far, initially, from the metronome. In fact, it plays in quite nicely. It’s as things continue to play along that you begin to hear the problems. Thankfully, warping allows us to easily fix each mistake as it occurs. And, Ableton even gives timing suggestions by marking transients, which are Psuedo-Warp markers that only need be double-clicked to create a new warp marker.

As I listen along, I can follow along with my mouse cursor. As soon as a note steps out of line, I can hear it, and in many cases see where the error occurs. I simply create a warp marker near where the timing error takes place, create a Warp marker from the transient of the out line note, and push it to where timing sounds right.

Of course, it’s possible to have Ableton try to warp your performance for you. Generally, and especially where piano pieces come in, I like to do this myself, as the warp points created by Ableton can create a bigger puzzle than it might have been otherwise.

From a distance, this can seem pretty tedious. The funny thing is once you get in a groove, the timing errors just begin to reveal themselves, sometimes sonically, sometimes visually. Before you know it, the timing is pretty much perfect, except for areas where you’ve elected to keep things relaxed. The timing errors were actually fixed within 20 minutes of editing. And, the payoff was enormous, as the timing is right. And, there’s a lot that I can do in editing to make it even better.

Warping your performance will save the timing. But, it can also introduce some artifacts and noise that might not normally be there.

Ableton has several Warp Modes, or Algorithms for every situation in audio. However, I found that the Complex Pro Mode was crisp and gentle enough with my audio that everything still sounded pretty natural after warping. And, if I decide to adjust the tempo of the session as a whole, the piano will still sound pretty natural, no matter what tempo I take everything else to. Well, as long as it’s within reason. Compare the difference with the example above, and the example below:

There are some major differences, especially middle of the way in. Certain notes chop and glitch as the transients play through. However, the Complex Pro playback sounds natural. And, the transients have no stutters whatsoever.

Now, I can use Ableton’s MIDI tools, such as Convert Melody to MIDI, if I want to try a different instrument or a different piano. Any loop that I decide to bring in will play in time. I have many more options. Plus, I was able to play like I wanted to!