Language
Despite having so many creative possibilities a lot of producers think of the vocoder as the 'robot voice' effect. G.W. Childs shows how Ableton Live's vocoder can phase up/bliss out your tracks.

While ‘robot voice’ may be the way that most people think of vocoders, you’d be surprised how many other applications there really are. One great way of using vocoders sits a little bit outside of the regular application. But, used wisely, and with attention to ratios, you can use a vocoder to quickly fill up any track with phasing, alien sickness, that really ties the song together. In this tutorial, I’m going to show you one way to use a vocoder as a return effect.

Before we get fully going, I should remind you of the laws of vocoding as we know it:

If these two signals are not going simultaneously, we get no sound, whatsoever. I explain this now because oftentimes, it’s the setup that usually causes most of the frustration, and eventual abandonment of a vocoder.

In a new Ableton session, I’ll place a Vocoder on Return A...

For my Carrier, I’m going to do something a little different. I’m going to actually run the B Return into my Vocoder. This means that I will be able to use my Sends to send multiple signals into the Carrier. This in turn, gives me a lot of control over what’s going in and out of my vocoder, because whatever I send through Send A, is going to be the Modulator, and whatever I send through Send B is going to be the Carrier.

I’ll also set each of my sends up to be sending before the fader, by setting them to Pre. This means I can just leave some tracks in my session for only vocoding, meaning that they will only be audible through the vocoder, as the tracks output can be all the way down in this mode. 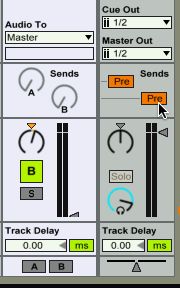 Step 2. Build Up that Track

Now, let’s supply some fodder for vocosion. I’ll create an old-school techno loop starting with drums. Nothing too crazy, just a little four on the floor kick, with some hi-hats to get the kids that exist in my own mind, dancing.

I’ll also add in a very jumpy bass line pattern to fill in my low end...

And, a nice, warm, thick synth pad to fill things up even more! 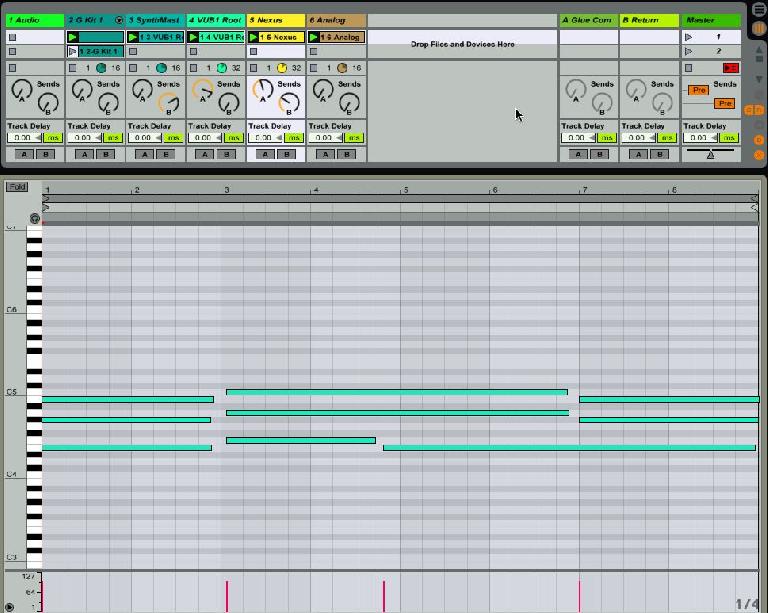 And, finally, a tiny pluck sequence to keep things crazy. 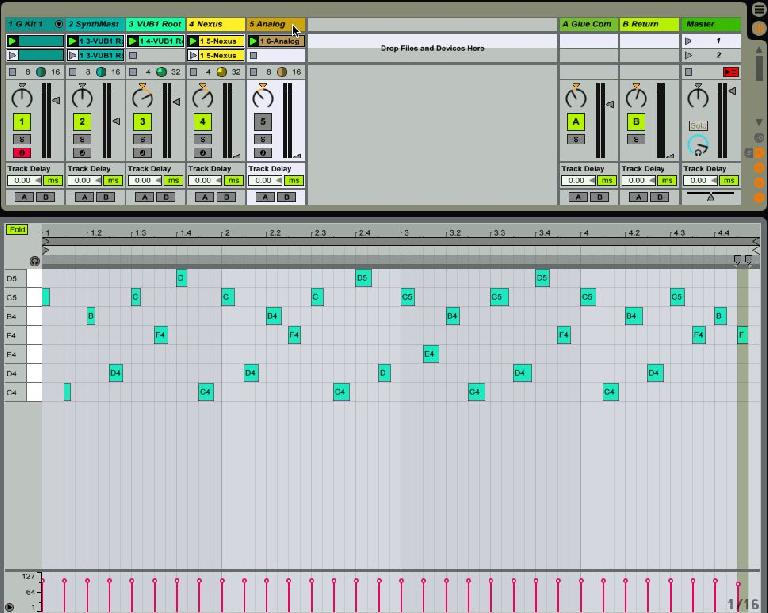 These tracks ultimately culminate into a very basic scene that could definitely use that little something to add some depth, spice and really just give it more of an interesting sound.

Now, I’ll start in by sending a fair amount of signal from my bass track to both Return tracks, via Ableton Sends. This means that the bass is, for the moment, going to be the carrier and the modulator of the vocoder. Normally, this would be an extremely bad idea, due to feedback. But, with the Ableton sends, you can adjust knobs until you’ve got a nice balance, in between.

As soon as you raise the sends, you’ll notice the bass is much bigger. And, possibly a little too bass heavy, which we don’t want. Because we may have many, many more instruments, eventually, being sent to this return, we don’t want it creating a lot of mud. To combat the mud, I’ll deploy an AutoFilter, set to High Pass mode, so I can cut out those low frequencies within my Vocoder Mod Return track, and get those cool vocoder accents going on over the top.

Note: In my settings, which you’re welcome to copy, I’ve set the HP filter to modulate via its own internal LFO, at a very slow rate. This will create a sweeping contrast between the Vocoder Mod Return Track, and the originals... If I choose to play the return tracks behind the originals.

I’ll also raise my drum sends up, substantially. By supplying more, and more noise going into both my Carrier, and Modulator signals on my Return Tracks, I’ll continue to build a crazy, sci-fi sound over on my Vocoder Mod Return.

If I solo the Carrier Return, you can really hear it! In fact, you can go back and record some really cool loops from my return track, later, by routing my Mod Return track back into an Audio track input, or something along those lines.

And, while this sounds kinda neat and makes an interesting accent over what’s currently playing, it could be a lot more interesting. One way to really show off the vocoder effect, and also fill up a lot of empty space in the mix would be to add an echo after the AutoFilter. I’ll drop in a Simple Delay, and add in a generous Delay Time, along with, you’ll note, quite a bit of Feedback. This will go a long way in helping us create a bigger, and more interactive environment within our mix.

Alright, I’ll deselect Solo on the Vocoder Mod Return track and add in some Pad, on the Vocoder Car (Carrier Return), and lower the pads out of the main mix, where they are only being heard through the vocoder...  And, let’s hear the difference from before. 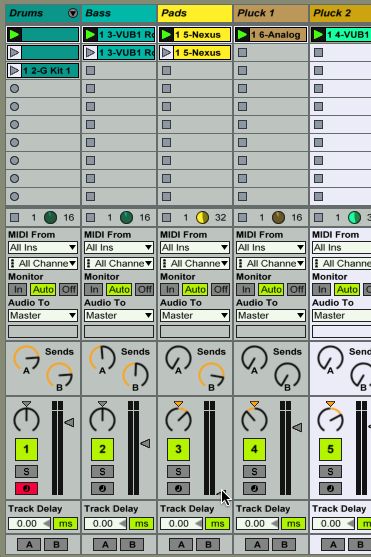 That’s a pretty big shift. There’s more going on in the mix, with an interesting accent going on and shifting in the background. And I haven’t even really dialed in the vocoder yet with Attack/Release and Filter bank settings, yet!

Vocoders are extremely versatile in their usage and they never fail to render a unique sound unto any and all sound sources that you attempt to run through the cool, little devices. Ableton’s, as you can see is capable of producing an extremely heavenly environment, it just takes a little getting used to, in terms of usage.