USB: Past, Present and Future for Creatives And Music Producers

Take a journey from past through the present and into the near future of USB connectivity with an emphasis for musicians and audio producers.

The original iMac was the first consumer computer to ditch legacy ports for USB, and while many USB ports look the same as they did way back then, a lot has changed. Whether you’re connecting a MIDI keyboard, an audio interface or a fast external SSD, it’s worth understanding the different standards at play behind the scenes, as well as the changing ports you see every day. And yes, you’ll probably need a few adapters for a while yet — but it’s not so bad. Let’s start way back at that early iMac.

The Birth of USB

While USB isn’t tied to any one platform, it was first given public attention in the original iMac, launched in August 1998. Previous Macs had used ADB to connect to keyboards and mice, serial to connect to printers and network devices, and SCSI for hard drives, but the iMac just had USB: a new port, with new cables and new connection protocols.

The original Mac and IIgs both offered serial ports, but the iMac welcomed USB.

As with any transition, there were teething issues. You could buy adapters to older MIDI, PS/2, serial, parallel and ADB ports, or buy new gear with USB on-board. Change is hard, but the benefits of having just one major kind of port across the industry were obvious: Macs and PCs could finally use the same keyboards, mice, and other gadgets. Not everything worked everywhere, but certainly life became a bit easier.

While the first USB devices couldn’t go very fast (1.5Mbps at the low end, 12Mbps at the high end) USB 2.0 arrived in 2001 with a new 480Mbps “High Speed” variant — enough for USB drives to become useful, and eventually, ubiquitous. That very high number was of course a theoretical maximum, never reached in the real world, but that didn’t stop hard drive manufacturers from quoting it as their “drive speed”. 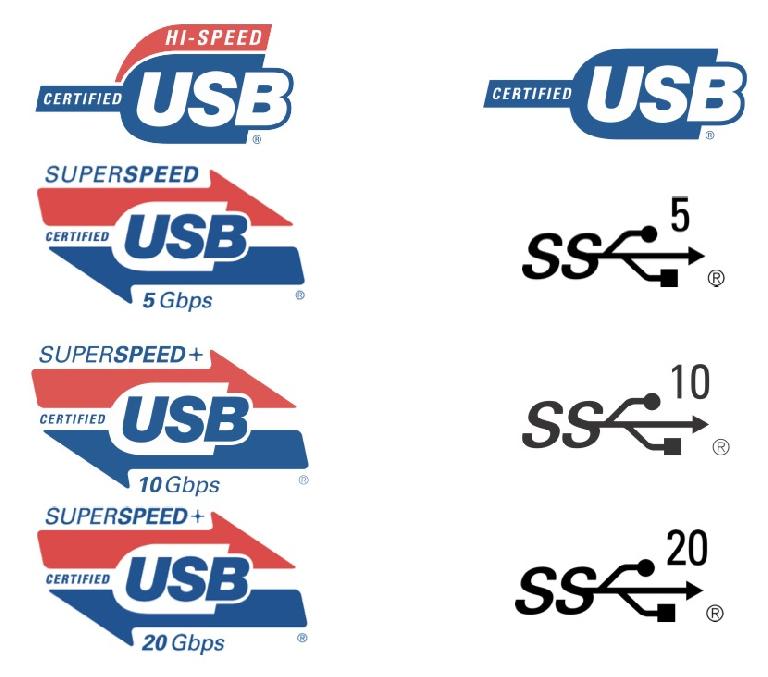 In 2011, USB 3.0 arrived and shook things up in a big way, to 5Gbps, potentially more than 20 times faster than the older standard. Subsequent revisions have pushed that to 10Gbps, 20Gbps, and now 40Gbps, but to get there, the ports had to change, adding more pins for more data and more power.

While the initial port design had a rectangle on the computer side, and a stubby block (USB-B) on the peripheral, these ports were fairly big, and a competing “Mini B” version also gained favour. If you buy a MIDI keyboard or audio recorder today, it’s probably one of these two. These older USB variants aren’t hugely fast, but they don’t need to be: MIDI doesn’t transmit a lot of information, and nor does a channel or two of audio. While printers largely standardised on USB-B, smaller consumer devices are most commonly found with USB Micro B, which today you’ll find on devices like game controllers and older wireless headphones. 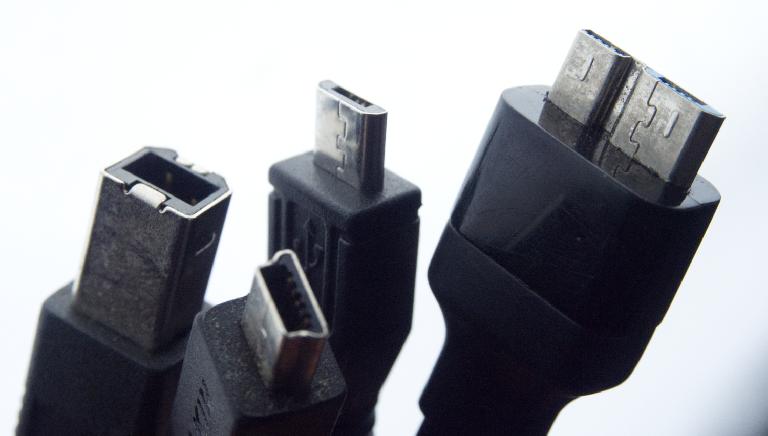 External hard drives today mostly use USB 3.0’s “SuperSpeed” protocol, and the Micro B SuperSpeed variation of the connector. Sadly, it’s thin, flimsy, and tricky to plug in. Indeed, almost all USB variants before the current one have had the same boring problem:

Which Way Is Up?

From day 1, the rectangular computer-side USB-A has provoked confusion as to which way it should be plugged in. While the top and bottom sides of the plug do look different (there are holes in the top side) they’re not different enough at a glance. Even if you’re careful, some PCs have their USB ports installed upside down, perhaps as some kind of cruel joke. At the other end of the cable, the top and bottom look different enough that confusion has been minimal, though USB Micro often needs a second look, and it’s possible to force this small connector upside down, causing damage. 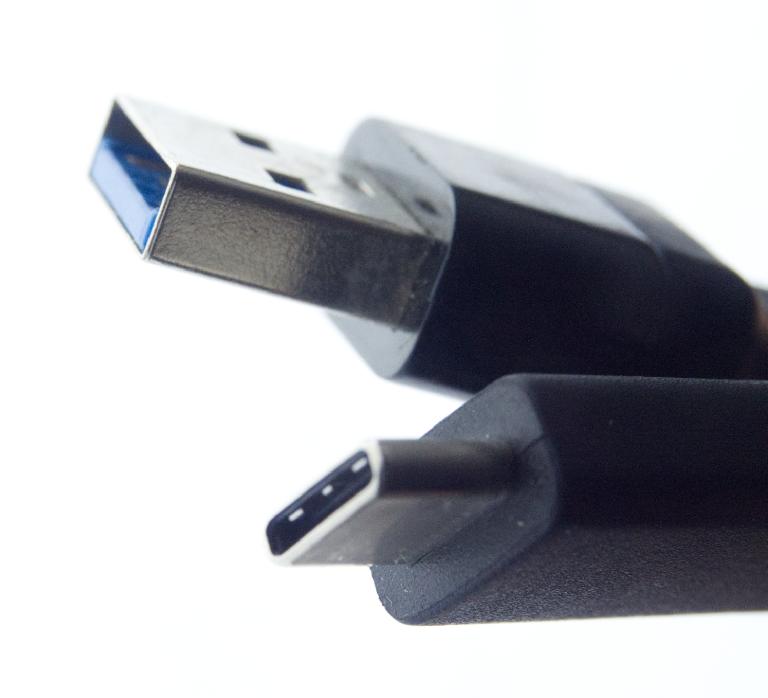 Apple’s Lightning port avoided all this by being reversible, which is not a trivial trick; the ports need to be smart enough to recognise which way is up, and change their behavior accordingly. But people don’t care how it works — it’s simply easier. Lightning influenced the next development in USB, the USB-C plug, which is not only reversible at the plug level, but identical at the computer side and the peripheral side. Except…

The old-style USB ports have been on computers for 20 years now, and we humans are stubbornly opposed to change. When the MacBook Pro came out in 2016 with only USB-C connections, the world cried out in horror, but the passing of a few years has improved the situation somewhat. USB-C to A hubs are widespread and cheap, and while dongles can be inconvenient, replacement cables (USB-C to USB-whatever-you-need) are cheap. The need for that will decrease with time, as more and more gear (like the RØDECaster Pro) moves to USB-C by default. 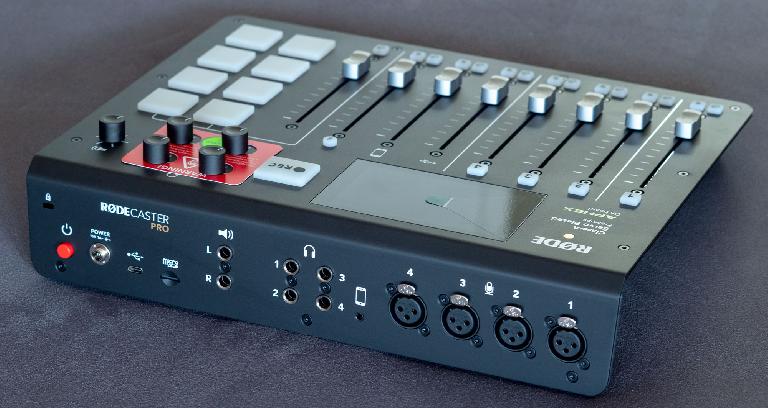 Finally, you’ll just be able to use generic USB-C cables everywhere, right? Sadly, not quite. The port might be decided (and hopefully fixed for the next couple of decades at least) but there are many different kinds of cables that use the USB-C port, and they’re not all interchangeable.

One Port to Rule Them All

The MacBook Pro’s USB-C ports aren’t just USB-C ports: they’re Thunderbolt 3 ports too. Thunderbolt, which replaced FireWire, is that higher-end, faster, smarter, more expensive, less common port that all Macs but few PCs have had. When Thunderbolt moved to the same plug standard as USB-C, Apple reduced the number of different ports they had to include (yay) and gave users more places to plug in either Thunderbolt or USB devices (yay). However, the downside of plugs that look the same is that you can no longer just look at a plug and know what it can do (boo). 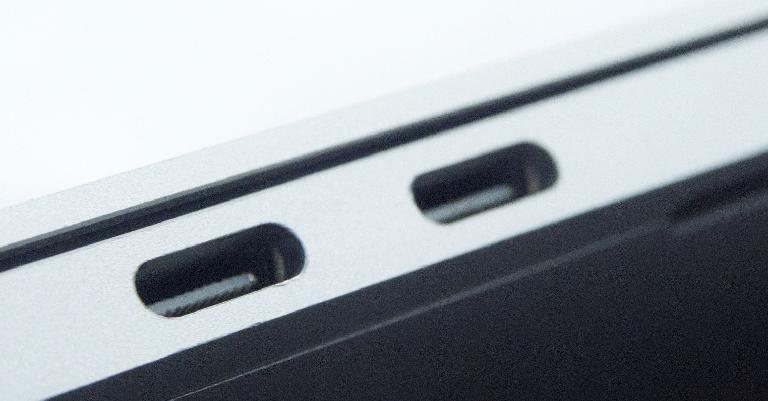 Four of these combo ports, a headphone jack, and that’s it.

A quick and easy example is that some cables are good at transmitting power, other cables are good at sending data quickly, and they’re rarely the same cable. The USB-C cable that comes with the MacBook Pro power adapter is great at power (USB-PD) but very slow (USB 2.0 speed) for data. So how do you figure out which cables you need? Use the cables provided with a device, or refer to the standards and buy the one you need.

Sadly, the USB standards group have done themselves no favors at all with their naming strategy. For example, there was once a standard called USB 3.0, and by normal understanding, once a standard is out there, accepted and printed on devices, that’s the end of it. But no: when USB 3.1 was released, USB 3.0 was renamed USB 3.1 Gen 1.  And they’ve just doubled down, renaming it again: USB 3.2 Gen 1. These naming shenanigans have made it hard to understand the differences between the latest USB versions, but officially we now have: 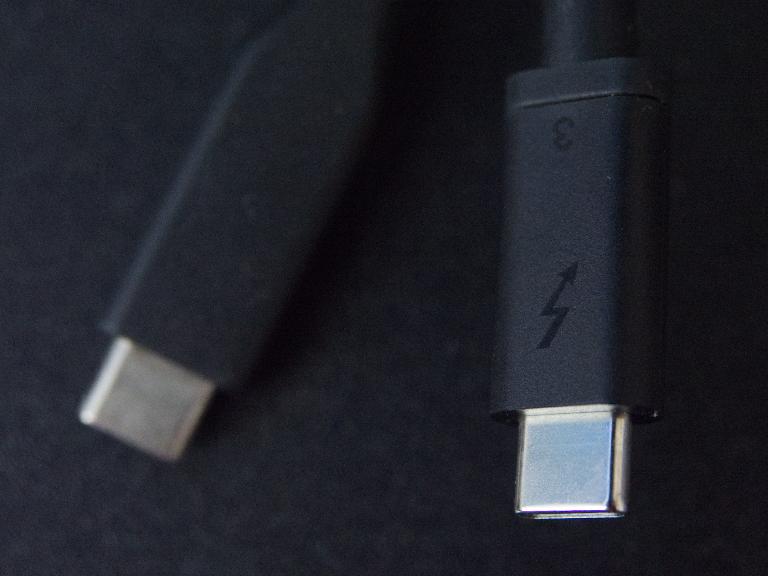 Hang on though, because this is all about to change: USB4 is coming! (Note that the space after USB has been removed.) USB4 isn’t out yet, but it’s just like Thunderbolt: 40Gbps, and backwards compatible with Thunderbolt 3. Finally, the two standards will merge. And also finally, USB4 will enable cheaper hubs with multiple USB-C ports.

So What Should You Look For?

If you can find devices with USB-C ports, that’ll make life simpler going forwards — and it’s easy to adapt back to old-school USB if you need to. For hard drives, it depends on how fast you want to move your files. Older spinning disks won’t see a benefit to moving past USB 3.0 (oops, I mean USB 3.2 Gen 1). Nor will older SATA-style SSDs that top out around 500MB/s. Newer USB 3.1 Gen 2 SSDs can transfer data twice that fast, around 1000MB/s, while the very best of today’s SSDs are best served by Thunderbolt 3 (or eventually, USB4) cases and can hit 2800MB/s, just like an internal Mac SSD. 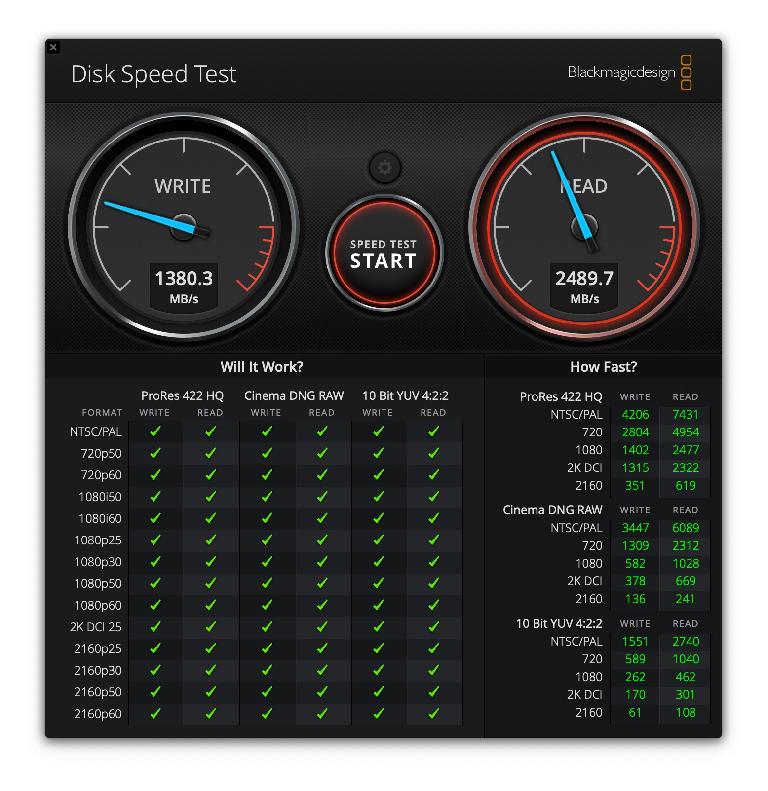 While audio isn’t nearly as demanding as video, when you’re shifting around any kind of large files under tight deadlines, every moment can count. If your internal drive is an Apple SSD (very fast) you can save time by buying the fastest drive you can afford. (And yes, the faster drives are, no surprise, more expensive.)

But remember: transfer speed is limited by the slowest device. A drive rated at 2800MB/s will be wasted if the source can only deliver data at 150MB/s. Moving to and from Apple SSDs should be very quick indeed, though, so if you need to move large files, you can certainly see a benefit from a fast drive.

What Should You Avoid?

I personally would try to avoid buying anything new with an old-style USB port on it, and look out: there’s a rash of cheap, new SSDs out there with old-style ports on board, and I’m not sure why. Drives with USB-C connectors have long shipped with two kinds of cables to keep everyone happy, and continuing to use the terrible USB-micro SuperSpeed connectors when there’s a clearly better option available is just boneheaded. The only positive: USB-micro makes it clear that these are slower devices, because you can only enjoy the higher speeds of USB 3.2 Gen 2 (and up) with newer USB-C ports. 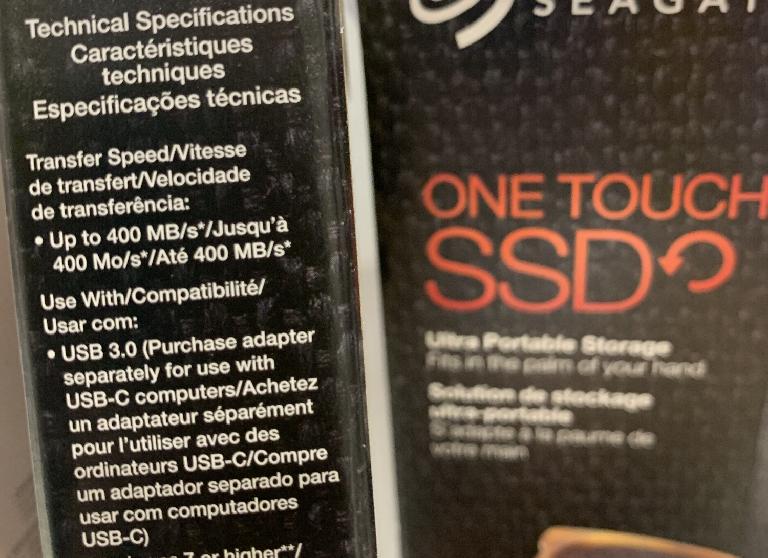 A new device with USB-Micro-SuperSpeed… no thanks

If you see a generic audio peripheral with USB-mini or even chunky old USB-B, it’s going to work just fine, even with the yet-to-be-released USB4. And USB-C devices will work with older USB ports too — just be aware that you won’t see the fastest speeds on the latest hard drives. But given two identical devices, choose the one with USB-C: it’s got small connectors that you can’t plug in the wrong way. Lastly, if you want the best, Thunderbolt 3 is still the fastest option — and currently your only option for intensive peripherals like an external GPU.

More manufacturers are switching over to USB-C, and while I think we’ll have USB-A for some time yet, it’ll become less and less common. For now, most manufacturers are transitioning slowly, even Apple. While the iPad Pro and Apple laptops are USB-C all the way, the phones and regular iPads all ship with Lightning to USB-A cables — it’s messy. 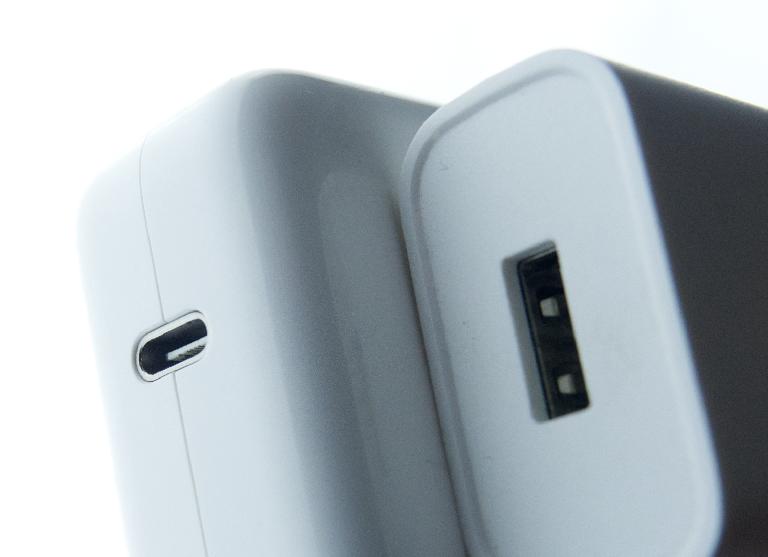 The past and future of chargers.

Eventually, when USB-C ports are the only game in town, people will shake their heads in remembrance of cables you could plug in the wrong way. We’ll get there eventually, but as William Gibson says: The future is already here, it’s just not very evenly distributed.

Take your learning for all your studio equipment to the next level in the Ask.Audio Academy: https://ask.audio/academy?nleloc=new-releases