Unleashing Your Apollo: Losing Your Fear and Recording Aggressively

Language
Why would you consider recording with effect plug-ins applied? There's engineers out there who do so routinely. Matt Vanacoro explores why using a UA Apollo with near zero latency to good effect.

Those three little words can strike fear into the heart of many a modern audio engineer. With the advent of more powerful computers and even more powerful effect plugins, many folks may not see or utilize the benefit of recording a track with some effects already applied. Experienced engineers, however, have been around long enough to know that there are many situations where you might want to record a track with certain effects already applied.

One of the absolute best features of the Apollo audio interface from Universal Audio is that you can insert powerful audio effects with near-zero latency on any of your inputs. Many musicians and producers use these effects during mix down or even during tracking for monitoring purposes, but it takes an engineer with real guts, confidence, creativity... and a little crazy thrown into record with effects enabled. Let’s take a look at a few situations and reasons why you might want to switch the effect button on your Console from “mon” to “rec”. 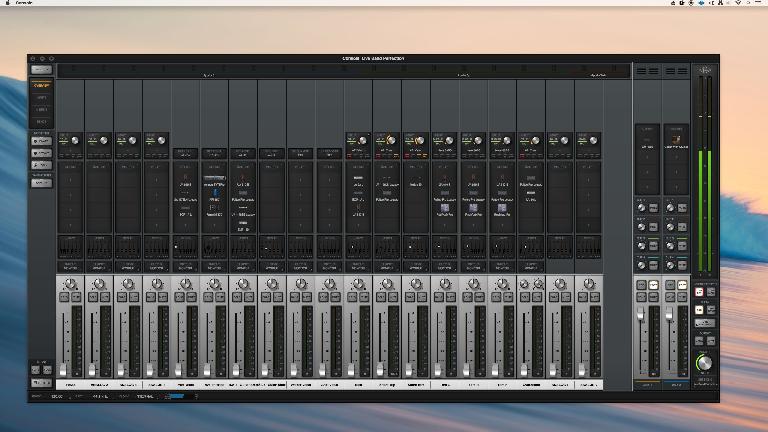 We’ve Been Here Before

Home studio owners likely have a stable of instruments that belong to them that get a lot of use. I have a drum set in my studio that I use for a variety of projects, and many bands that come in choose to simply use the “house kit” that I have. I even have a drummer that I wind up calling in for quite a few sessions, so when a songwriter without a band hires me to produce their album—the chances are better than average that they’re going to get my guy Adam on the drums. After 3–4 sessions with my new Apollo with Adam behind the kit, I found that I was generally EQing the snare the same way, applying similar levels of compression, and gating it pretty consistently. Since I was using the built-in preamps on the Apollo 8p, I could even save the gain levels of each pre to the same place that suited his typical volume and energy of playing.

I thought to myself, why am I spending time EQing, gating, and compressing him every time? Sure, I could save the settings as a preset in Logic, but wouldn’t it be even more convenient to utilize these same EQ, compression, and gate effects upon input so that no matter what the DAW I chose to use, I could simply record Adam’s finished drum sound right out of the gate? I set up an API preamp sim, Pultec EQ, Fairchild compressor and never looked back. Any time I bring Adam in now, I have these settings ready to go for each of the pieces of the house drum kit. I can record him playing drums, bus him to a little reverb and drum bus compression, and call the drums mixed. It’s saved me time, and saved my clients’ time to boot! I can now spend more time working on the other elements of my songwriting clients mixes, and so far everyone has walked away happy! 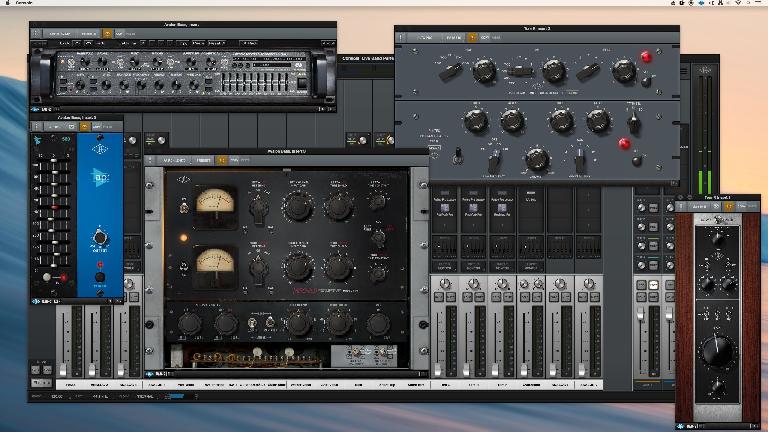 Is there a danger in recording with effects already printed? Of course! You can’t do this kind of thing lightly, and if a different drummer steps behind the kit who hits harder, I’ll have to either tailor the settings or ditch them entirely and record dry. Knowing, however, that if I bring Adam into play that I won’t have to spend any time tweaking the drum sound is extremely attractive for my client, for myself, and for Adam. Everybody wins!

To the Nth Degree

The power and flexibility of the Apollo system has really transformed my workflow. In addition to having sound-sculpting effects ready to roll for my typical list of studio musicians and their respective axes, I also have utilized the cascading feature of the Apollo to chain together my Apollo 8, Apollo 8p, and my Apollo twin. This has allowed me to leave my drum set permanently mic’d up, my guitar amps and direct boxes permanently connected and ready to go, as well as my bass amp DI’d and active. In other words, a band can walk into my studio, I can press record, and be confident that I can capture what’s going on with absolutely minimal setup time.

This isn’t a completely new concept—studios have had pre-mic’d “house gear” wired up and ready to go for ages. What’s new, however, is the idea that the configuration of this gear as well as its gain staging can be saved and adjusted across the board for each client. By making an attempt to simplify and utilize the on-board preamps of the Apollo, I have made it possible for not only routing, sound sculpting, and monitoring to be saved—but the very gain-staging of the instruments itself.

Onboard preamps have come a long way since the earliest audio interfaces. Back then, using the onboard pres was what typically separated the amateur from the professional (well, ONE of the things). Most pros wouldn’t be caught dead using the onboard preamps of an early USB1 audio interface. These days, however, more and more hit records are being made with boutique audio interfaces that include preamps with spectacular sound. You don’t have to settle for “transparent” anymore. The preamps on the Apollo series can be as aggressive as you like or as passive as you need. If you haven’t tried them out of habit, it’s time to break that habit and give them a listen. I’m confident you’ll be pleasantly surprised with what you find.

Learning to harness the true power of your Apollo interface can be daunting. There are so many features and seeing all of them in action all at once can be tantalizing, but also seem very far off. The best way to get there is to implement them gradually. Try nailing down an instrument sound that is EQ’d the way you like, and save the gain staging of the preamp in Console. Use that as a “starting point” each time. So many engineers are skipping over this stage entirely. They’ve gotten used to transparent preamps and recording completely dry, then adding effects in post. They’ve forgotten that sitting down for a bit, trying to find a good drum (or guitar, or vocal, or anything for that matter) sound used to be part of the recording process. Getting a good sound used to be something that you did BEFORE the mixing process, and your Apollo can help you lose your fear of doing that again.

Continue your journey with these recording audio video courses in The Ask.Audio Academy.