Unleash Your Beats in FL Studio

Language
C'mon, who doesn't like their beats served big?! If you enjoy slick shuffles, funky flams and crazy note bursts, then this FL Studio beat building tutorial will get your juices flowing.

Now that FL Studio has the doors more officially opened towards the Mac, lots of new users are coming out of the woodwork. This lends to its renewed growth as a platform. But, because it's technically running within a Windows emulation on your Mac, it can get a little confusing. For PC users, having strange Explorer windows pop up is no big deal, but Mac guys may be left scratching their heads. Also, the Step Sequencer is amazing for drums, but how do you get more intricate? How do you add sick shuffles, flams and get those crazy 128 note bursts going on? In this tutorial, I'd like to show you how to go beyond the limitations of the step sequencer in order to build a dubstep/trap/hip hop styled break by building from the Step Sequencer.

It's good to walk before you begin running, and it's good to have a solid foundation. I'll just keep FL Studio at 130 BPM, which is its default, and begin by selecting a new kick drum by switching out the sample that is currently being deployed and labeled as Kick in the step sequencer. To do this, I'll simply select click the Kick label in the Step Sequencer and the Channel Settings window will appear, along with the sample playback device that is currently supplying the default kick for FL Studio. 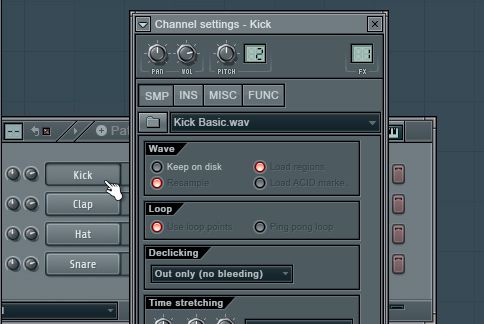 Next, I'll press the Browse Sample button. This will bring up an Explorer window, usually seen on a PC, within your Mac. Of course, if you're PC, you don't care, just carry on as normal. 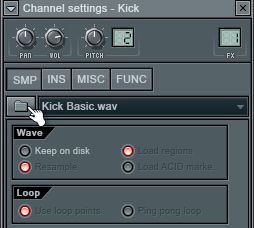 Regardless, within this window, use the arrow up button to go up one level in the directory we're pulling samples from using the small, green arrow button. 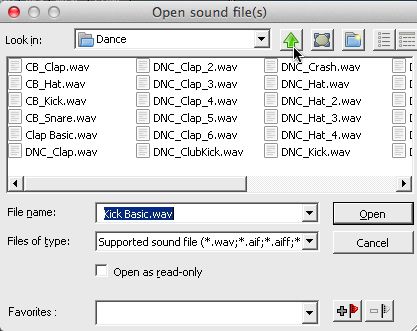 Once you go up a level, you'll see that you're working in the Drums directory, and that there's a HipHop directory. Double-click, and choose the the Hip_Kick_9.wav. 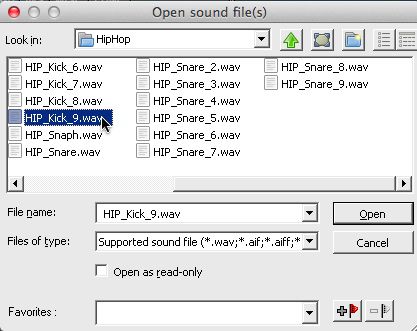 Now, swap out the samples for the hat and snare, as well with hip hop versions of the same instrument, but leave the clap at the default sample that's currently there. Once finished, your step sequencer will look similar to this.

After increasing the size of the pattern to 16, I'll program my clap to be a regular rhythm where the clap hits every 16 step, or half-time.

And, then sprinkle kick, with Hip_Kick_9 randomly between the hits of the clap. Make sure you have one step at the beginning, and that the kick does not hit when the clap hits. Or, just copy the pattern I've made for the kick, for demonstration purposes.

Next, right-click on your hat, whichever sample you chose, and select Fill Every 2 Steps. This will provide a quick, easy hi-hat 8 beat with no programming necessary'¦ Until we start sprucing it up. 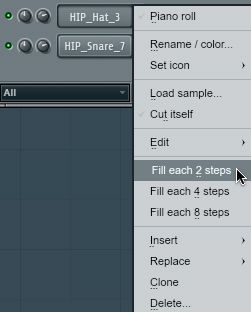 Finally, sprinkle some snare between the clap hits to provide a nice breakbeat rhythm. Again, stay away from the clap, just sprinkle around, or simply copy my pattern.

Now it's time to start adding in those higher resolution shuffles and flams. The best place to start for this would be the hi-hat, as it provides so much of the energy within a break beat. I'll right-click on the track label button within the Step Sequencer and select Send to Piano Roll. 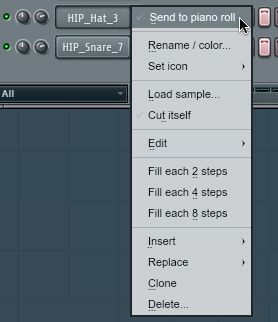 The Piano Roll allows us to zoom in much tighter within the sequencer, and draw steps at a much higher resolution than the Step Sequencer. The more you zoom in to the Piano Roll, using the Zoom bar, at the top, the more intricate and rapid you'll be able to get with your hat.

Now that you're zoomed in tighter, replace your thicker hat beats with smaller hits that run close together, like so. I'd recommend starting off the pattern this way, and then sprinkling some bursts in, here and there. You may also try increasing the Snap Resolution, so that you can draw in even smaller note lengths. This is particularly helpful for glitchy, machine gun hats that you hear sometimes. I would encourage you to take your time experimenting at this point, before moving on to the next steps in the exercise. Hi-hats can be a lot of fun, and very educational when it comes to learning sequencing, as well. 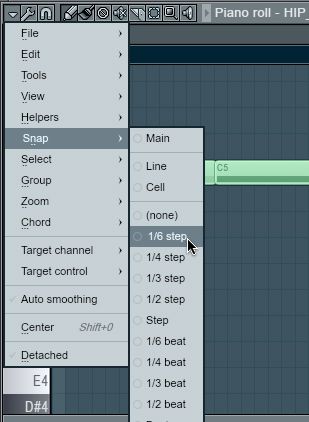 If you're done adding, now would also be a good time to tweak some velocities within the hi-hat by lowering the Velocity of your hits in certain parts, and ramping the velocities up, at the beginnings of your bursts, or ramp them down. This should be done based on how it sounds. Don't worry about the visual aspect!

Now that we have a decent break to work with, let's get it over where we can start arranging more, outside of the confines of the Step Sequencer. On the Pattern Selection drop-down menu, select Split By Channel. This will break down every part within your Sequence into its own Pattern. This will scare the hell out of you, at first, because you'll think you've lost everything. You haven't! Set FL Studio to Song Mode...

And then bring up the Playlist! This window allows us to arrange patterns around within a sequence in the manner in which they will appear within song structure. It's also a great way to arrange when things enter and leave. I mean, you don't want the same beat going on over and over!

Within the Playlist, I'll use the Pencil tool to draw in the currently selected portion of my old pattern, which should be the kick, as it's the first instrument in the Pattern Sequencer, and will thus be recreated as the first pattern.

When you're ready to drop in the clap, snare, hi-hat, etc., just scroll to their pattern number using the Pattern Selector. Use choose the number associated with the pattern, or scroll through and see which pattern appears within the sequencer when, for example, you scroll to Pattern 2, 3, or 4. Once a number is selected, draw in its pattern within the Playlist. For example: select Pattern 2, then draw the pattern into the playlist. Add in patterns 1-4, having them appear periodically, as befits the song. Don't have them run all the time! And, reserve the snare for more aggressive parts. In the end, you'll have a nice, building beat that has variety, as well as complexity. Now, just add some bass, and melody'¦ vocals, if you're feeling it. You're in song mode, might as well build it up!

Bottle Jackson
this is the worst use of flstudio i've ever seen. you completely ignored the native swing/shuffle in the step sequencer and used flstudio just like any DAW. why bother using it at all?

if this is your personal choice that's fine but since you are posting a tutorial for new users I have to say the honest truth. ya blew it!

E_veryday_J
I don't usually comment, but this article changed my life!!! I've been using FL Studio wrong... I never knew about the split channel. I would play everything on the playlist first and work from there... This has made my life so much easier!

Thanks G.W and Audio Mag! lol