Language
When Native Instruments gave us The Finger (ahem!) in Komplete it didn't get the same kudos as its sibling plug-ins. But, this MIDI controlled fx plug-in is very powerful as G. W. Childs finds out.

Possibly one of the most overlooked effects in the Komplete library, in my opinion, would have to be the Finger. To give definition to what the Finger does generally leads to comparing it to other effects devices like Stutter Edit. However, the Finger has been around a little longer than iZotope's popular plug-in, and while there are similarities, there are also plenty of differences, to boot.

However you care to describe it, or think of it, the bottom line is that the Finger is a powerful MIDI controlled effects plug-in that gives you the ability to individual, triggerable effects to several different keys on your keyboard. Once assigned, these effects can be triggered individually, by pressing one key, or you can trigger several effects at once, by pressing several keys.

This is useful for DJs, remix artists, and even regular studio projects where you just want to insert a little bit of 'wow'. It's also particularly powerful for live performances, this I can tell you from experience. Being able insert the quality of the Finger's effects at will effects the dynamics of a performance in ways that are hard to explain. But, let me tell you, being able to loop your voice on the fly, while you're singing... Well, that's pretty cool.

In this tutorial, I'd like to walk you through how you could insert the Finger in to your own project, regardless of what kind it is, then how to go about mapping some effects of your own creation, to keys of your choice.

Set Up The Finger

In order for the Finger to work, you'll need to run it in Reaktor FX. To do this, insert Reaktor FX as an insert on your audio track.

Note: You can also place the Finger on your Master output, as an insert as well. This can actually lead to some exciting stuff, and has a lot of short term gratification, if you're just trying the Finger out. 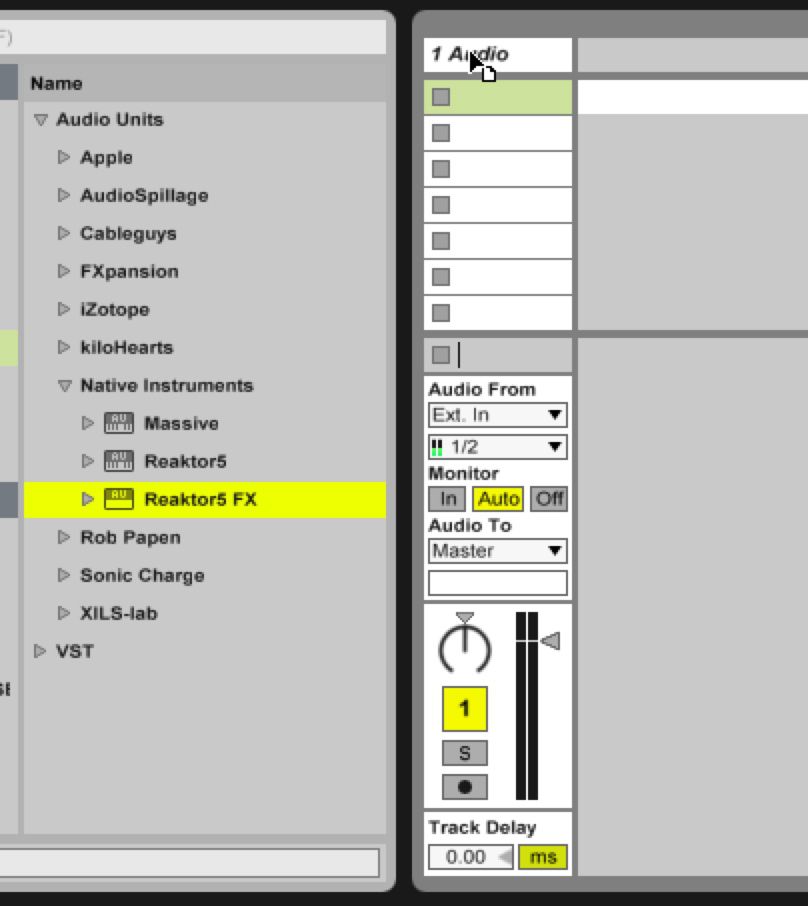 Next, once Reaktor FX is set up, you'll want to drag the Finger from the Reaktor Player panel, over in to the work area of Reaktor FX, so that you can use it. 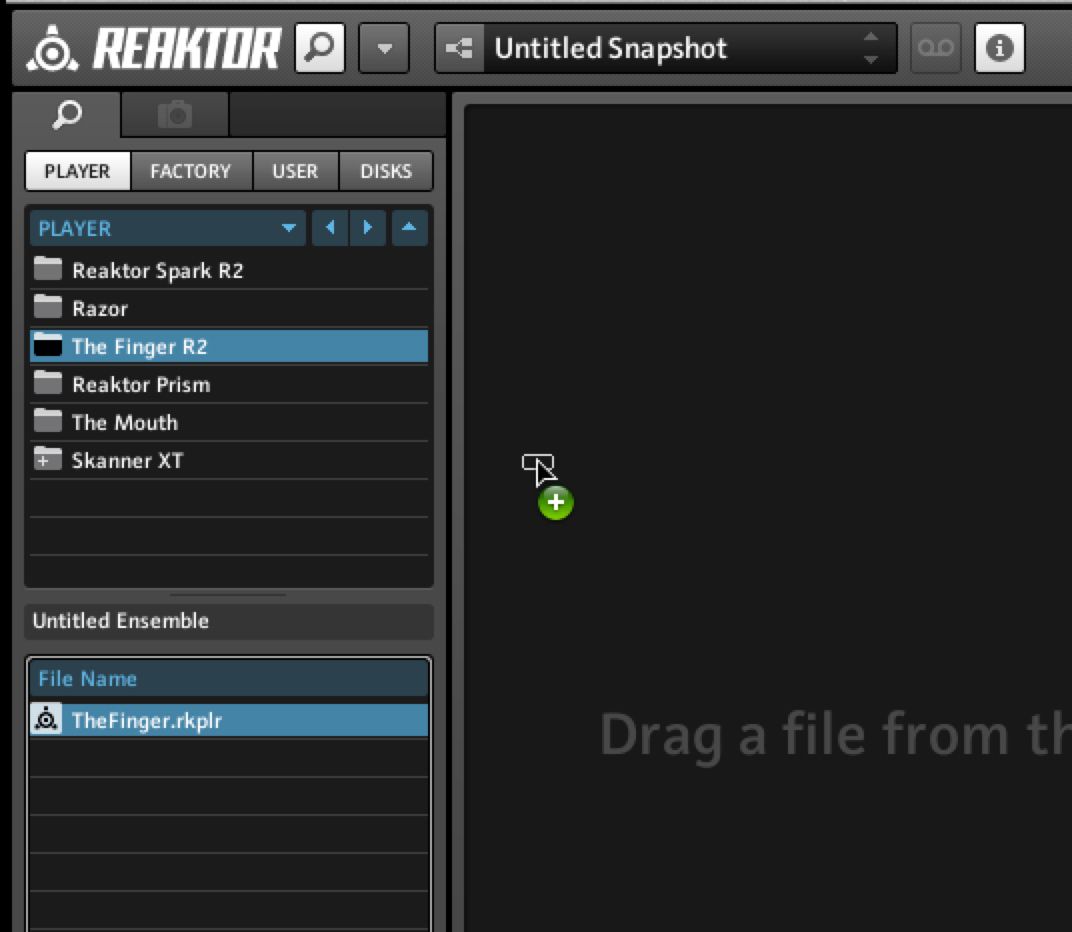 It's important to note that sometimes Reaktor won't show the whole interface. If this happens, just go choose Auto-Optimize Size, under the View sub-menu. 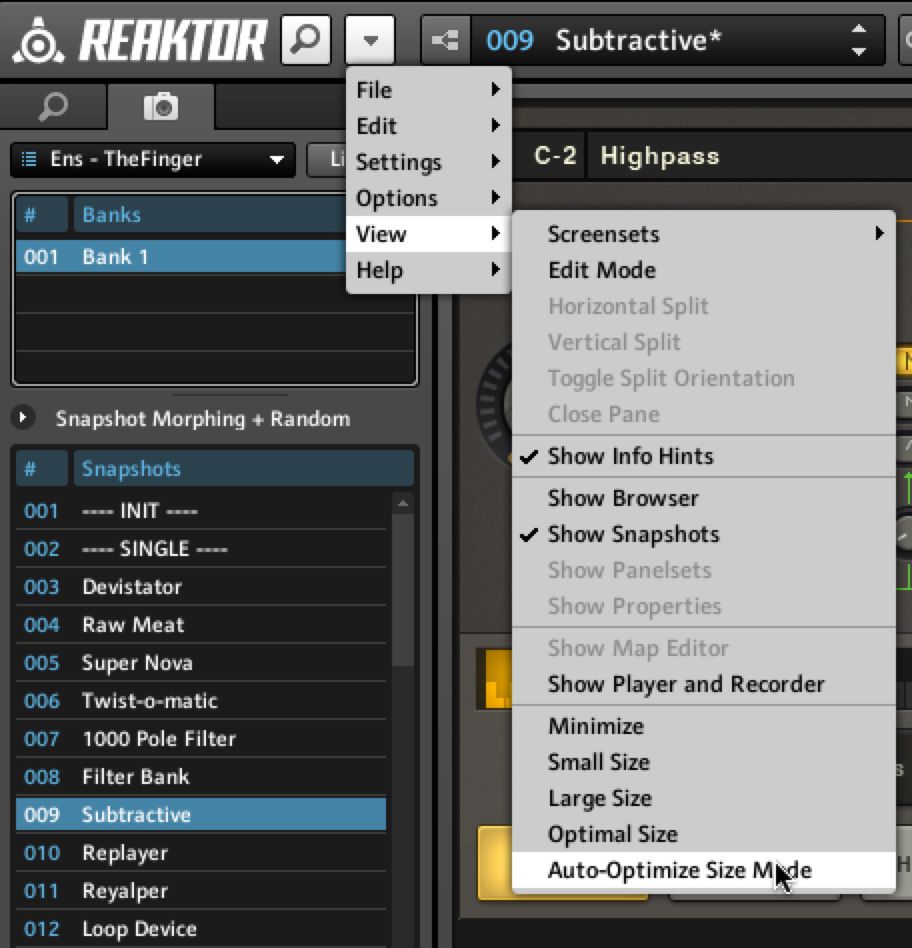 Now that the actual plug-in is set up on your audio track, or master out, let's get MIDI going. I'll be showing you how to do this in Ableton, but if you have a different DAW, just look up how to use MIDI controlled FX in your DAW.

For Ableton, create a MIDI track. Once your MIDI track is created, in the MIDI To, drop down menu, choose the name of the Audio track that has Reaktor FX, and the Finger assigned as an insert. In my case, it's Audio 1. You'll also want to arm the MIDI track, so that you have actual MIDI control coming from your MIDI controller.

By default, a Finger patch is always loaded upon setup. If you'd like to stop and just play with MIDI control now, before going farther, I understand. Press play, and press some keys. Usually, the bulk of the FX will be on C1, going up. Try it out now, and then return to this tutorial when you're ready.

Okay, got it out of your system? Good. Let's try making a quick patch. Choose the INIT snapshot, from the Snapshot menu on the right, in Reaktor FX. 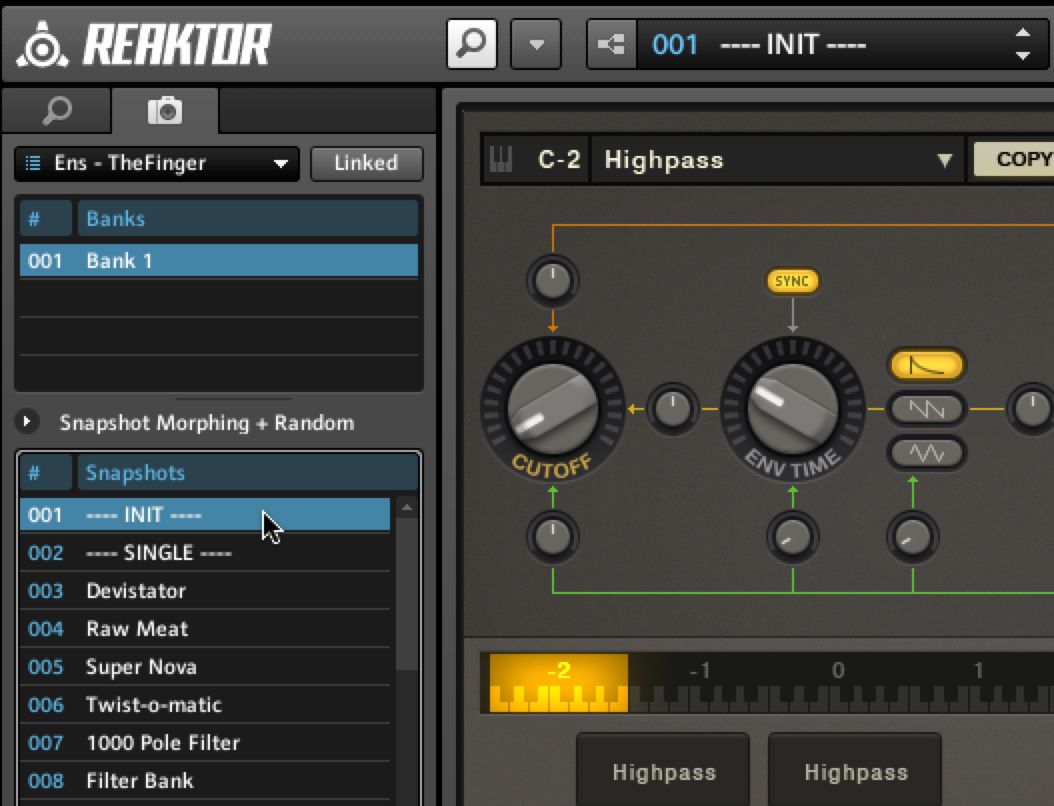 We've just chosen the Initialized patch for the Finger that essentially has every key zeroed out with high pass filters. No matter what key you press, in this default, initialized mode, no effect will be heard on you audio. Let's make this change!

Choose a key on your keyboard that you'd like to assign an effect to. Personally, I'm going to use C1. Once you press the key, it will be exhibited next to the FX drop down menu, near the top of the Finger.

By clicking the small arrow next to this FX listing, you can see the entire range of effects that can be assigned to your key. Choose Loop >. 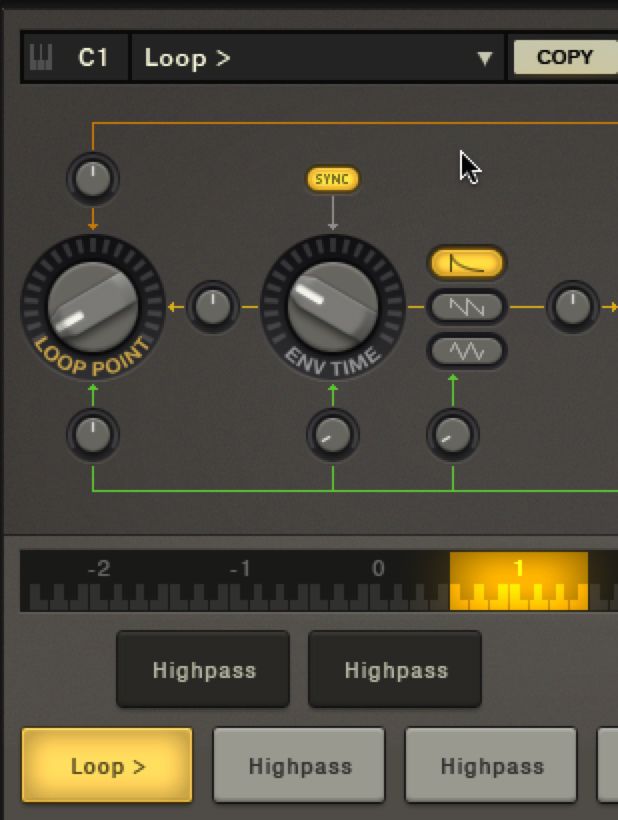 Once chosen, you'll see Loop > as the new label of the C1 key, at the lower part of the Finger's interface. You've just assigned your first effect. And, I have to tell you, the Loop effect is really cool. If you try pressing the C1 key now, you'll notice that the Loop effect just produces a stutter. But, if you'd like to increase the amount of the audio that the loop effect plays back, simply raise the Loop Point knob on the Finger's interface. 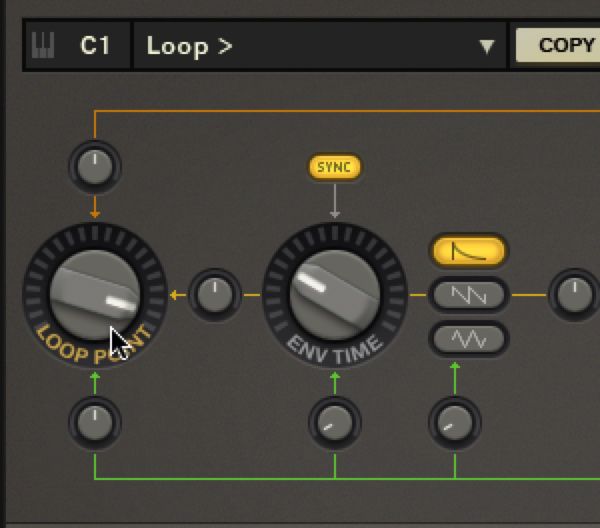 You can also adjust the playback speed of the Loop as well. This is done by raising the Speed knob. You'll find that if you move the knob halfway, near 12 O'Clock, the loop is slowed down almost all the way. If you raise it past this point again, the speed returns to a normal tempo, if moved all the way up, of course. You'll note that by shifting this knob around, while the C1 key is being held, you can get some really neat record scratch-like effects. 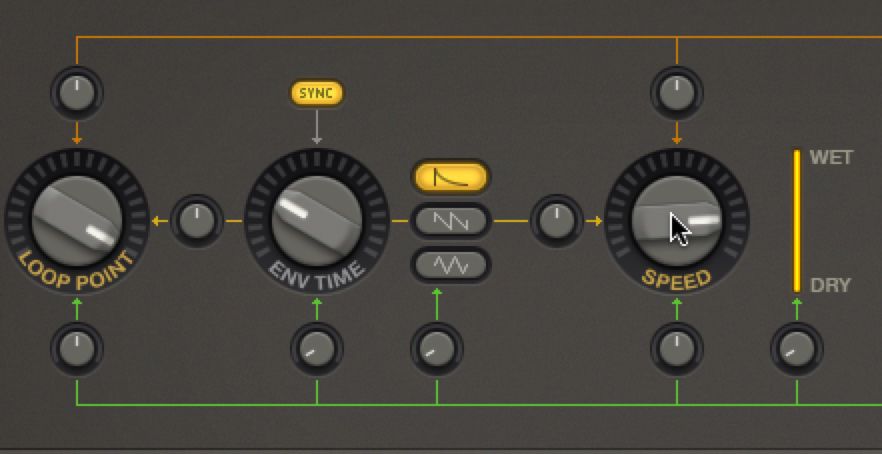 Now that we have a loop set up, let's add an additional effect. Press the D1 key, and then go to the FX drop down menu. Choose Degrade, which is a bit-crushing effect. 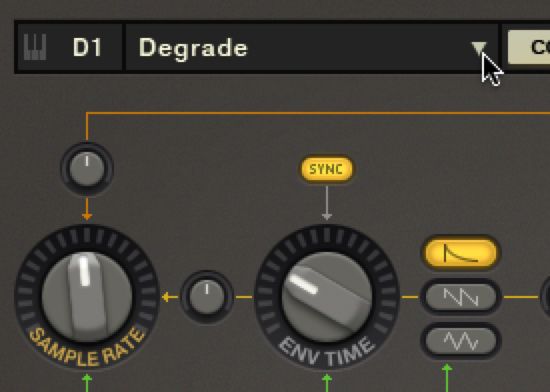 This effect sounds very normal until you raise the Sample Rate knob. Try it out now, while you're holding the key. 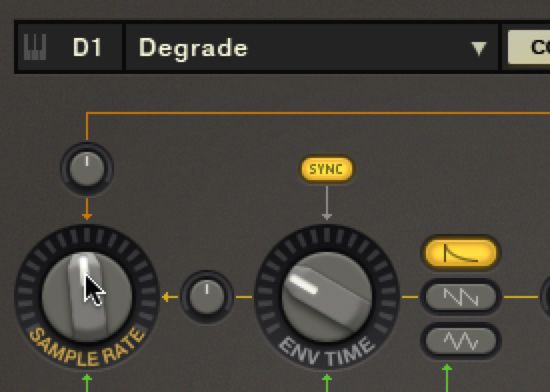 And, now that you have two effects on one keyboard layout... Try the two effects together, while holding down both keys. Nice, eh?

In this tutorial, you've seen what two effects can do at once. But, what about setting up a whole key range? Now that you know how to assign keys, give it a whirl. I guarantee you'll have some inspiration by the time that you have 4 keys assigned.

Check out this course for more in-depth training on The Finger: