In the early days of analog synths, keyboardists became well versed in the concepts of mono (monaural) and legato playing modes. This was out of necessity, as those early models like the venerable Minimoog among others were limited to playing only one note at a time, and players had to adapt their keyboard technique when playing melodic leads and basslines, to that limitation. Of course synths eventually evolved into fully polyphonic instruments and mono/legato performance techniques became an option rather than a limitation.

When samplers came out, and especially when they started to achieve much more realistic emulations of acoustic instruments, the issue of mono/legato performance techniques and sound programming once again became an important consideration. The designers of sample libraries - especially ones that included basses and melodic instruments like solo strings, winds and brass - devoted a lot of energy to ensuring that the performance of solo melodic lines achieved an appropriate degree of realism, and this consideration continues to be an important aspect of sample programming, particularly in the larger orchestral libraries and for specialty libraries that focus on solo instruments like sax (and other winds & brass) and violin (and other solo strings). 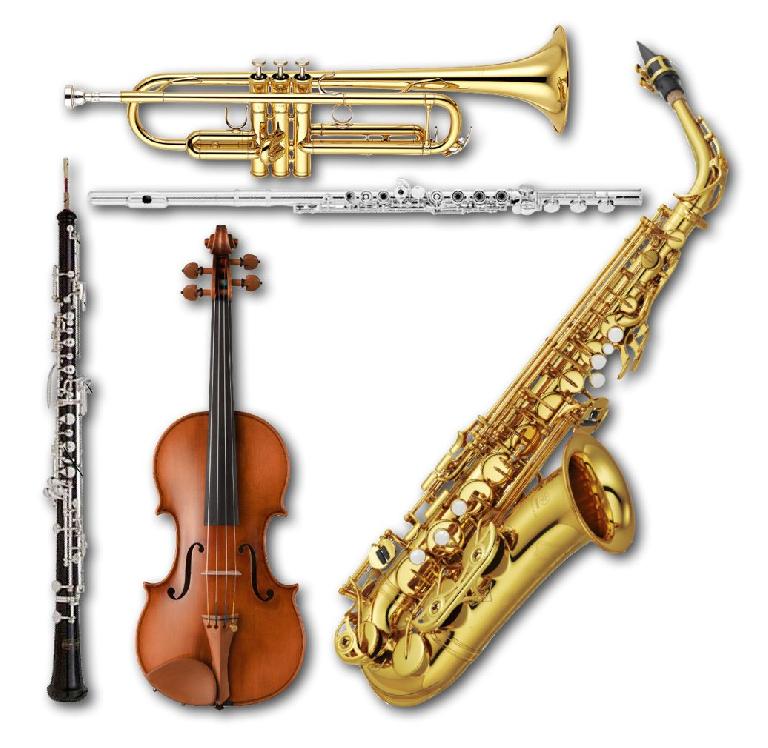 But many users of both modern synths and sample libraries are not all that familiar with the mono and legato options and implementations typically found in virtual instruments. So here’s a brief look at some technical details and terms, as well as a few considerations for mono/legato programming and playing technique.

One at a time

Most people - especially musicians - know that Mono is short for monophonic, which means one note at a time and Poly means polyphonic - multiple notes at the same time. Besides the earliest analog synths, many acoustic instruments share the playing limitation of being monophonic: pretty much all winds, saxes, & brass and many others, though capable of polyphony, are usually played monophonically, like the bass.

The term Legato is often associated with monophonic playing. Musically, it means “smoothly”, or “connected”, and is often seen in sheet music as a direction for how to perform melodic lines, with long, connected notes. The opposite direction would be something like “staccato” which calls for short, choppy, disconnected notes.

From a technical perspective, mono and legato playing affects the attacks and releases of notes. There are two ways a monophonic line can be performed. Each note can be released before (or as) the next note is played which would result in a normal attack for each note, even if the line was played relatively smoothly. The other option is to not re-strike new notes. After the initial note of a line or phrase is played with its normal attack, the next notes would change pitch without being re-played. So those notes would not have individual attacks, they’d just pick up the sustaining sound of the previous notes, but with new pitches - in effect, all the notes in the phrase would be connected, or continuous. Of course, that is Legato playing.

When performing monophonic melodic lines on acoustic instruments, legato playing is often used to break up longer lines into shorter phrases. For each new phrase, a new note is struck, and then the following notes are connected. This is one of the techniques that composers and performers use to help melodies stick in the listener’s head, to make them memorable (that was why phone numbers were traditionally broken up into sections, to make them easier to remember) and good use of this technique is one of the keys to writing memorable melodies and hooks.

A monophonic melody, first without any legato notes, then broken up into (legato) phrases

In classic analog synths, mono/legato playing was employed for melodic solos and synths bass parts. Nowadays, most synths have an option to select how monophonic patches will work, technically. There will often be a choice labelled Re-trigger or Legato and this will determine when notes’ ADSR Attacks are re-triggered (regular mono), as opposed to when the pitch will change without re-triggering the Attack portion of the ADSR (legato). On a keyboard, legato playing is usually controlled by playing technique, and overlapping notes are required to achieve a legato response. But if re-triggering is enabled, then even continuous, connected, overlapping notes will each have a new Attack.

If Legato is enabled in the patch, when detached notes are played, each Attack will still be re-triggered, but when overlapping notes are played, the pitches will change without new Attacks, for Legato response.

A common feature when legato response is enabled, is an option to set how quickly legato notes’ pitches will change. At the fastest setting, the pitch change will be instantaneous (like a guitarist’s hammer-on), but slower settings will make the pitch slide up or down from one legato note to the next. This is how most acoustic instruments work. It can be obvious, as with the trombone, or very subtle, like most other brass. The musical term for this is Portamento, and you’ll often see this option labelled that way, but it may also be called Glide Time. That’s what you’re setting: how long it takes for a legato-played note to get from the previous pitch to the new pitch. Set On but very fast, it can add a subtle smoothness. Set to extremes it makes for a great special effect, as you heard in the previous audio example (4).

Sample-based sounds also offer these options for mono/legato response, but here it can get a little more complicated. When a synth player performs a legato line and jumps several notes without re-triggering the attack, it sounds fine. But if that player is performing with a sample-based instrument, it might not sound so fine.

Samplers use multiple individual note recordings, assigned to many different keys, to achieve the most natural sound. If a sampled patch used only one sample, stretching its pitch up and down the keyboard, the tone would become decidedly unnatural as the player played notes more than around a musical third away from the actual recorded note: the dreaded Munchkin effect.

But if a player is playing a multisampled instrument and performs a legato melody where the pitch jumps several semitones, one of two things may happen. Either the legato-played note will trigger a different recorded sample which will result in a discontinuity (a click, usually) instead of a proper smooth legato pitch change, or the V.I. will play back the legato note using the same recorded sample as the original note, even if it is many semitones away, resulting in an unnatural timbre. In either case, this can get in the way of achieving consistent realistic, natural-sounding legato melodies. Some transitions may sound fine, while others may suffer a glitch or unnatural tone, distracting from the intended musical phrasing.

Modern sample instrument designers, especially for the bigger, more high-end libraries (like most of the top orchestral libraries) go to great lengths to overcome this. To ensure natural-sounding transitions between all legato-played notes, regardless of how the underlying sample recordings are mapped out across the keyboard, they record the actual players not only performing each note on an instrument at various dynamic levels but also actual transitions from note-to-note for all the sampled notes! The patch is then programmed to utilize the appropriate transition when overlapping legato notes are performed. So instead of playing one sample and then either transposing it or audibly switching to another sample, the instrument responds to the overlapping notes by switching/crossfading from the first note to the matching recorded transition and then to the next note. The result is a more consistent realistic, natural-sounding legato performance. 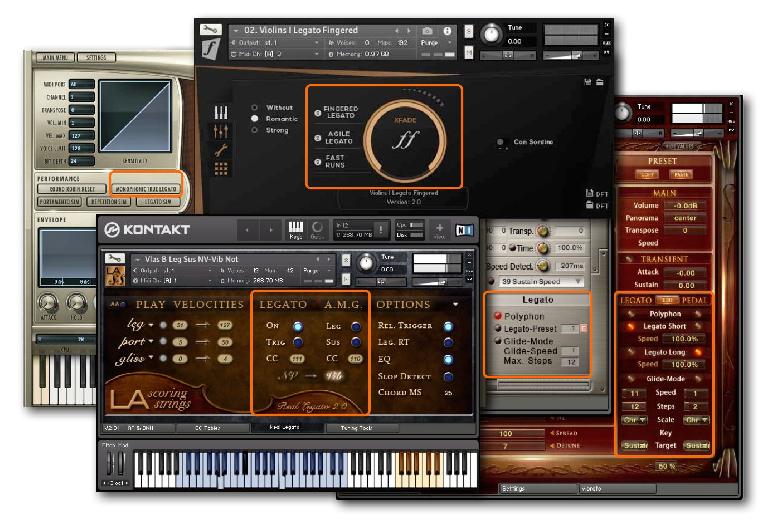 Luckily, all of this is usually handled automatically by the instrument and all the player needs to do is perform the legato parts with a suitable overlapping technique, which can take a little practice. So why worry about it at all? Well, wrangling all those extra samples can have an impact on CPU overhead, and with a lot of these virtual instruments in use, many computers can be overwhelmed.

So the libraries sometimes offer “lite” versions of instruments, but one of the things that may be sacrificed in these is a lot of the extra sample content that ensures realistic sound for legato playing. It can therefore be important for the user to be aware of when he/she can or can’t get away with using any such “lite” versions, depending on the specific performance techniques used for different musical parts: reserving the high-CPU versions for more exposed, musically prominent solo melodies, say, and going with “lite” patches for more background, chordal parts of the arrangement.

The handling of mono/legato playing is getting even more sophisticated, with some of the latest cutting-edge MIDI controller keyboards and devices like the ROLI and Linn controllers. These take advantage of recent additions to the MIDI spec that allow for more expressive legato-style playing even with polyphonic patches, and incorporate additional controls like ribbons and touch sensors. Anyone who wants to take advantage of these new capabilities will have to get used to new performance techniques, especially when it comes to mono/legato phrasing, but the end result promises to be even more natural, musical, and creative applications.

Mono/legato performance technique is a very important aspect of musical expression, so it pays to not only have a good handle on it from the musical side but from the technical side as well, so every melody line and bass figure can have all the musical nuance that it needs for the best results.

Learn more about synthesis in the AskAudio Academy here.