Logic's Multipressor and Adaptive Limiter plug-ins have some hidden talents that you may not know about, even if you have used the effects. Jay Asher reveals all...

The Multipressor is a Multiband Compressor. This means that unlike a traditional compressor you can compress only certain frequencies or all frequencies by different amounts. It’s a problem solving tool that can be very helpful or very destructive, so you need to understand it. 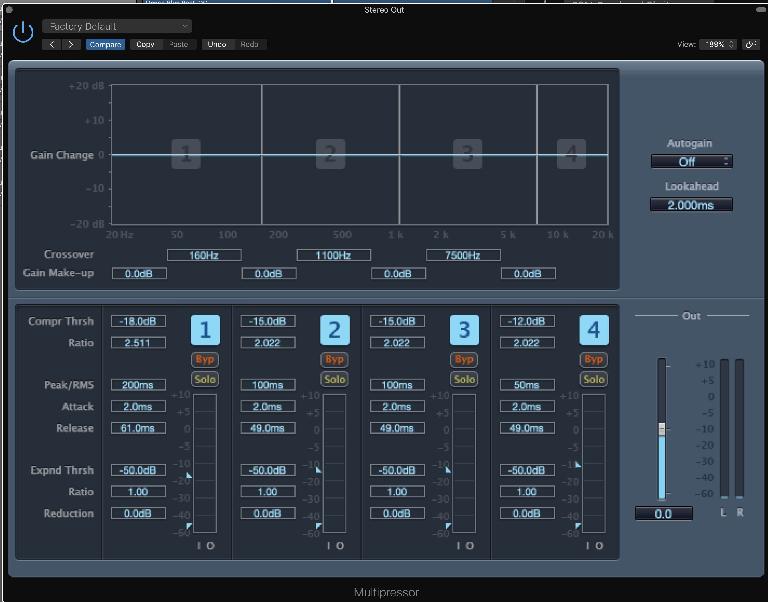 Let’s start by listening to a little piece I created by dragging in some Apple Loops. You may want to recreate it with this picture as your guide. 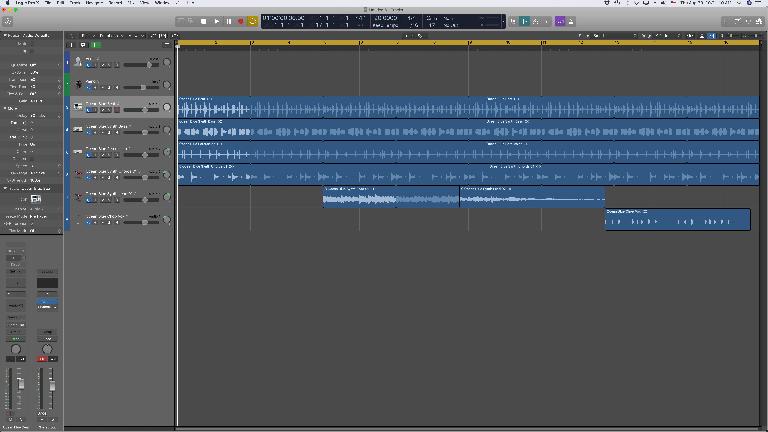 Sounds pretty nice, but are there issues? The Channel EQ’s Analyzer provides some clues.

There are some low-end frequencies that could be tamed and others boosted with an EQ surely, but let’s explore what the Multipressor can help us do by compressing specific frequencies. If you look at the first picture you see that the default preset has all four bands engaged with different thresholds set for each frequency range. Start by soloing each band and playing them back and then bypassing each band and you will see that it isn’t really doing much with the default preset. Load the Final Pop Compressor preset and now listen to the sound and how it has come to life.

Soloing and bypassing the different bands now gives you some real insight into what this preset is doing. 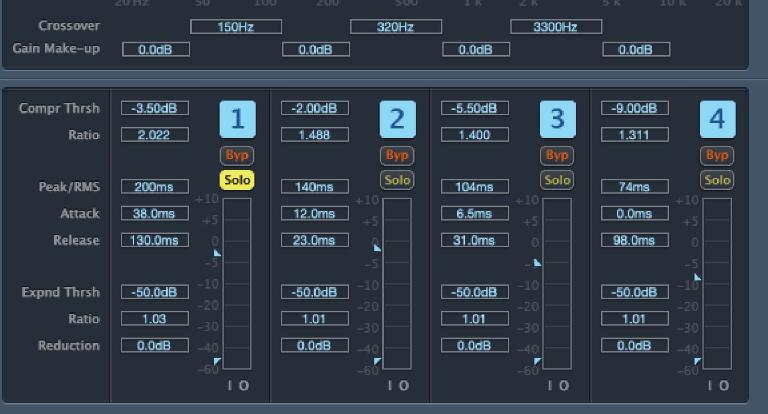 Band 1 when it sees a signal of -3.50 dB is compressing the frequencies in that band by an approx 2 to 1 ratio. You see where the level peaks and that the Attack and Release are pretty fast. With downward expansion, the signal is reduced in level when it falls below the threshold level. If you drag any one of the fields up and down you get both audio and visual feedback of what it is doing to that specific frequency range.

Any compression you do on any of the bands can of course lead to a lower or higher volume of that band and of the Multipressor overall. By default Autogain is turned on to compensate, but if you turn it off, you can hear what how it is compensating. 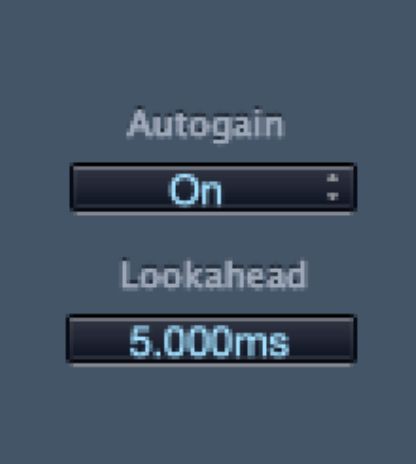 With Autogain off, you can now adjust the Gain Make-Up for each band.

Play with the Gain Make-ups. Notice that you can now achieve a very different sound than with Autogain. Pressing the Compare button while it is playing allows you to compare the preset with what you are tweaking.  Next, turn Autogain back on and start to change the Crossover frequencies of each band. Again the sound changes dramatically. (If you think you like what you are achieving, you can save it as a preset.)  Change now to the Final Hip Hop Compressor and again, a totally different sound and the stereo output goes into the red, which is a no-no. So if I turn down the plug-ins output from -3.6 to -4.8, that solves the problem. Let’s hear it.

I like it but Band 3 sounds a little obnoxious on this piece to my ear, so I drag its Gain Make-up down to -5.5 dB and narrow the Crossover from 3500 Hz to 2500 Hz, And I turn Band 4’s Gain Make-up from -4.5 dB and now I am happier.
Obviously these are totally subjective choices and you may want a very different result, but if you spend a couple of hours with this, I think you will get a feel for just how powerful a tool the Multipressor is.

Well the sound is pretty good, but it’s missing a little bit of oomph for me that I hear when I turn the Multipressor’s Output back to -3.6 and the Stereo Output to 0.0, but then the stereo output goes wildly into the red.

Well isn’t that what limiters are for? You betcha, so I open a Limiter below the Multipressor and with the default, the sure enough, problem is solved. But when I bypass it and open an Adaptive Limiter with its default, the sound takes on yet another dimension. So what is the Adaptive Limiter doing that the regular Limiter is not? The regular Limiter functions only as a brick wall. Metaphorically, it draws a line in the sand and says, “thou shalt go no further.” It doesn’t color the sound at all.

The Adaptive Limiter works by rounding and smoothing peaks in the sound, adapting to the source material, kind of like an analog amplifier being driven, which does somewhat color the sound. For me, it does so in a very pleasing way.

The GUI is very straight ahead. You see how much signal is coming into the Adaptive Limiter in the Input, how much it is reduced and how much is being outputted to the stereo output. You can see the setting for the Gain, while the Out Ceiling makes sure that the signal does not rise above its setting. The Lookahead knob determines how far ahead it is looking for those peaks while clicking Apply for the Optimal Lookahead does just that, tries to determine that.

If you have some not so hotsy-totsy hardware unit being employed, Remove DC Offset essentially turns on a high pass filter to get rid of some of the noise. I turn it off. True Peak Detection when turned on detects inter-sample peaks in the signal that can lead to some sonic issues. It’s complicated. If you want to know more about inter-sample peaks, check this out: https://www.productionmusiclive.com/blogs/news/mastering-tip-what-are-inter-sample-peaks-why-they-matter

There are only a handful of presets and as you go through them you will see that the biggest difference is in the Gain amount. I stick with the Factory default but raise the Gain to 4.0dB and apply the Optimal Lookout out of 20 milliseconds with Remove DC Offset off and I like how it sounds but it is again going into the red.

I choose option #3 because lowering it slightly to -0.1 dB solves the problem and I can’t hear the difference. So now I have arrived at this result, which I quite like.

Hopefully, you now have a basic understanding of what these terrific plug-ins can bring to your production. Have fun!

Learn more about recording and mixing with Logic Pro: https://ask.audio/academy?nleloc=category/audio/topic/logic