Language
Musikmesse 2016 served up a number of impressive audio interfaces. AmongstÂ our favorites at the show were the Goliath and Zen Tour from Antelope Audio.

Check out the video overview and interview from the show floor at Musikmesse here:

These interfaces are packed with impressive features. Want to know more? Here's the details for both the Zen Tour and Goliath below... 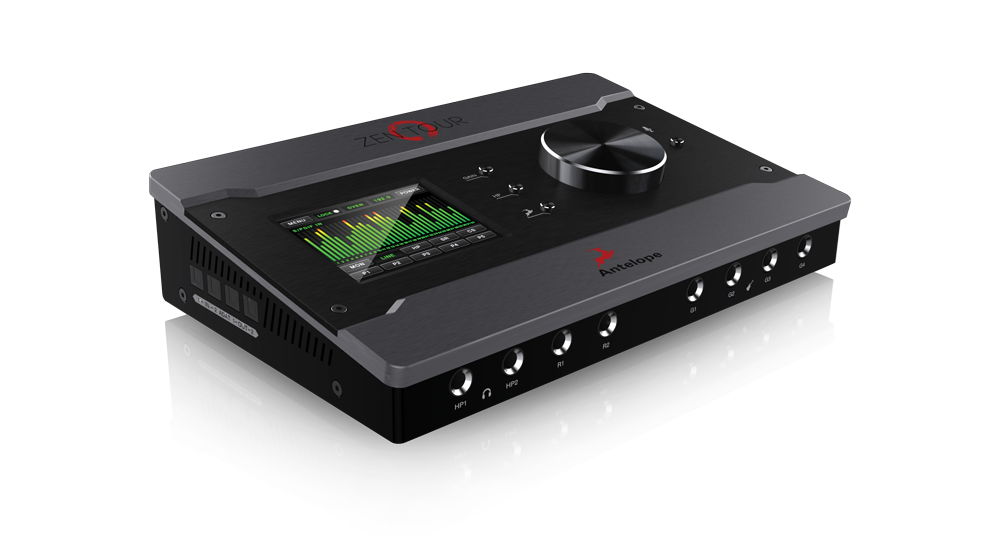 “Antelope Audio has already established itself as the top choice for professional studios around the globe for audio conversion and digital clocking,” says Antelope Audio's Director of US Sales Marcel James. “Zen Tour puts many of Antelope's innovations within reach of an entirely new audience of musicians, bands, and DJs — including our unparalleled and continually evolving DSP-based effects and amp simulations. This interface packs an incredible amount of utility and recording finesse into a small form factor, making it ideal for tracking, mixing, and creative processing.”

Zen Tour’s 8 outputs are carefully designed to enable an all-in-one workflow, at home or on the go. Dual independent headphone outputs enable two musicians or a musician and engineer to listen in without additional hardware. Dual monitor outputs enable A/B monitor switching, making it easy to reference mixes on two different systems. Dual reamp outputs provide incredible versatility for guitarists and other recording artists — whether tracking guitars direct in a hotel room and then rerecording a performance through a tube amp back in a home studio, or applying high-quality effects to manipulate a vocal mix. A talkback button on the front panel keeps Zen Tour at the core of your home studio setup.

Next Gen Software Control
Antelope Audio continues to innovate in software-based hardware control with Zen Tour, with an impressive touch screen, a handy mobile app, and a cross-platform software control panel. With its networking and remote control implementations, users are able to manage all Zen Tour features from multiple computers in the same network as well as from a smart phone or tablet thanks to the iOS and Android mobile apps.

Digital Multi-tool
Zen Tour combines many of the features that have made Antelope Audio a leader in recording innovation in an aesthetically attractive and compact form. With tools for tracking, mixing, and processing, Zen Tour's uncompromising audio quality makes it a best-in-class interface for bands and musicians who want to create professional quality recordings that reflect their musical visions.

The Goliath features custom built-in DSP effects and several modern and vintage hardware EQ and compressor models, bringing the ultimate in both features and usability to the most discriminating recording applications.
"Goliath represents a revolutionary turning-point in modern interface technology and is the culmination of years of research and engineering," commented Igor Levin, founder and CEO of Antelope Audio. "Gone are the days of proprietary interface technologies that delivered inadequate performance and quality at an exorbitant price per channel. With Goliath, which features unmatched channel counts, flexibility and connectivity options, Antelope brings world class recording capabilities, inspiring creativity like never before."

With 64 channels of Thunderbolt™ connectivity, a vast array of routing options and sophisticated software and DSP capabilities, users are able to exert more creative control over their recordings than ever before. In addition to its pristine, commercial-grade AD/DA converters, Goliath also features 4 superb instrument DIs and 2 transformer Reamp outputs on the front. The unit also features 24 line level outputs and 16 line inputs, all on DB25 connectors — making it ideal for tasks requiring hardware inputs or summing. Combined with this impressive feature set, the addition of 16 channels of Class-A microphone preamplifiers makes Goliath more flexible, capable and expressive than any other interface on the market.

Intelligent, Hands-On Creative Control
With intelligent, tactile controls and a supremely intuitive software user interface, Goliath places full creative control and easy operation in the hands of the user. The physical unit includes dedicated knobs for mic pre gain and instrument inputs, as well as large, assignable knobs for stereo, surround, or headphone monitor outputs. There are also dedicated buttons for talkback, mono and mute, as well as a flexible 'Antelope' button.

Goliath's included control software enables users to easily route any input to any output using a color-coded routing matrix, which also allows users to save up to five presets. Using the system's iOS and Android compatible applications, users can easily go wireless — making it easy to stay in command of Goliath's robust feature set at all times.