Language
Get your sound design tuned up nice and easy in Ableton Live with this awesome in-depth tutorial by Noah Pred. Using Captured Returns you'll be able to create something unique.

Live 9 makes it easier than ever to build enticing drum tracks and musical sequences from scratch. But have you ever got the feeling what you're working on might be missing something – a gritty texture, a special build, some kind of unique ambience?

At this point you might start hunting through your sample library, searching for the ineffable – but it often proves futile to rely on samples from other sources to sit well in the context of what you've already put in motion; ideally, you need something in the key and scale of your composition that fits in seamlessly with the vibe you've established. This might sound like a tall order – but the answer might already exist inside your set. 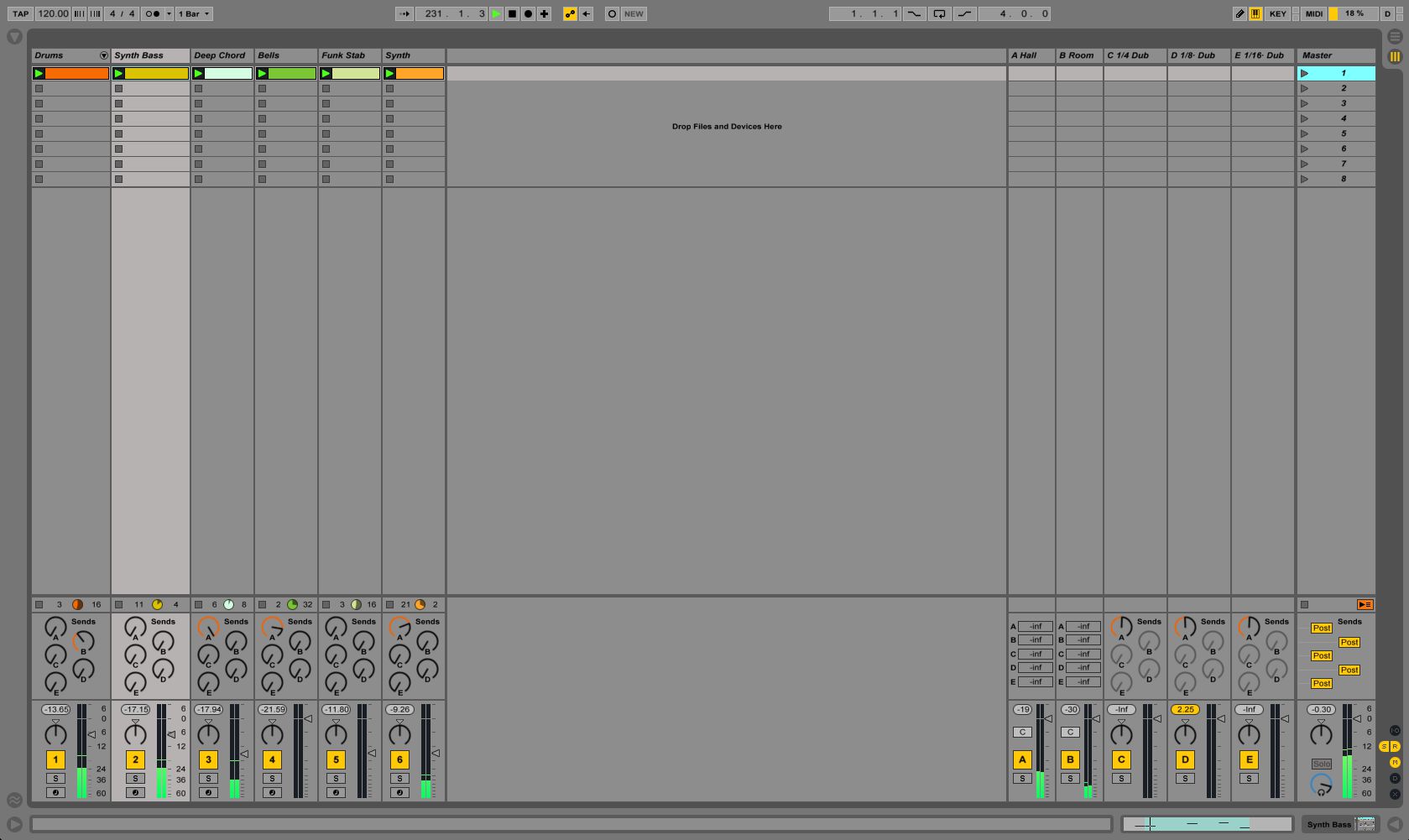 Pic 1: I've quickly built up a basic electro-breakbeat loop in the Session View.

I have a repetitive synth loop using an instance of Analog that seems a bit naked, so that's what I'll try and treat first. I'll create a new Return channel using the hot keys Command-Option-T, and now we have a new Return track ready for effects (Pic 2), on which I'll place an Overdrive, a Simple Delay, a Frequency Shifter, and a Phaser (Pic 3), in that order. 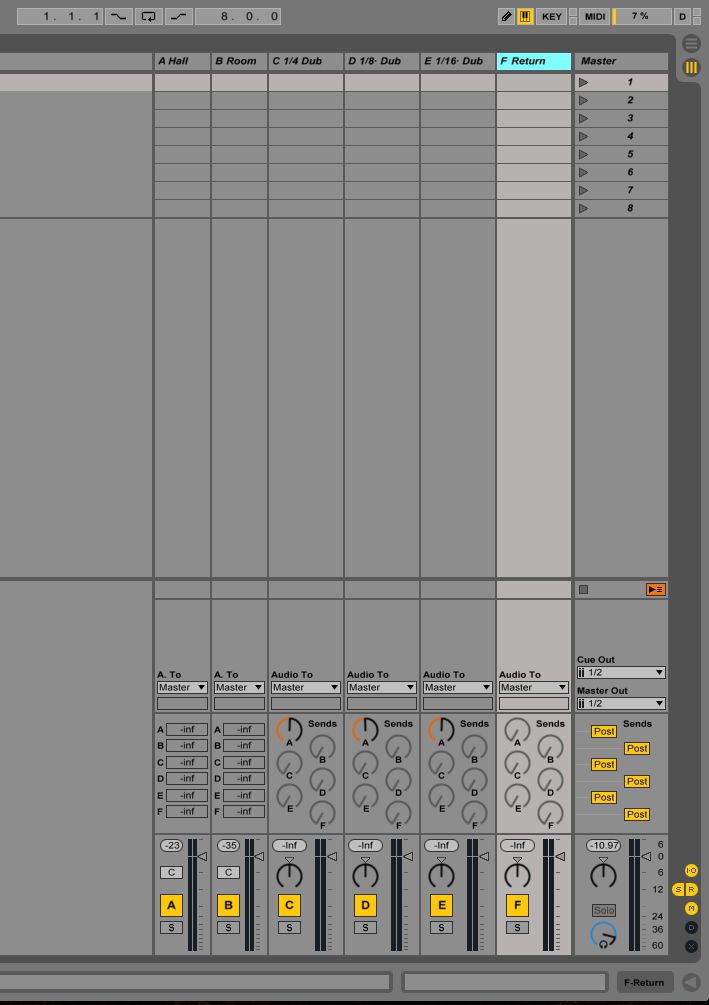 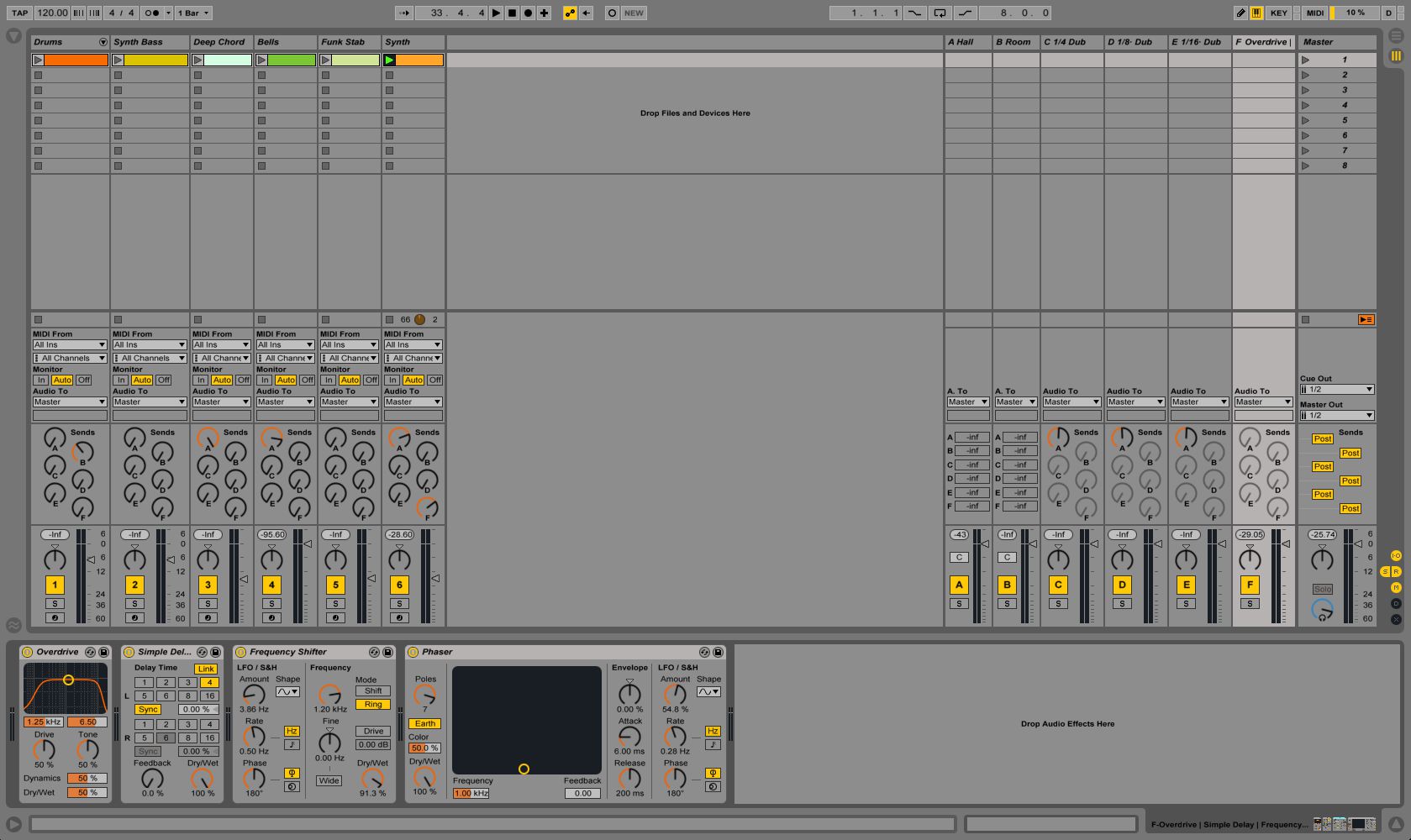 What's crucial here is that the Dry/Wet dial of the Simple Delay is set all the way to Wet; if there's any percentage of dry signal bleeding through, we may get some unwanted phasing and gain issues as the original notes bleed through both channels. I've set the Simple Delay to 1/4 note timing with no feedback, so they play in between the 1/2-bar looping of the synth notes; I've then adjusted the Frequency Shifter in Ring Modulator mode, and tweaked the Phaser to taste – resulting in a uniquely distorted response to the original synth line.

In order to capture the results of our Return effects for further audio editing, we need to create a new Audio track in our set. Using the hot key Command-T, I've added a new track and renamed it Capture (Pic 4). 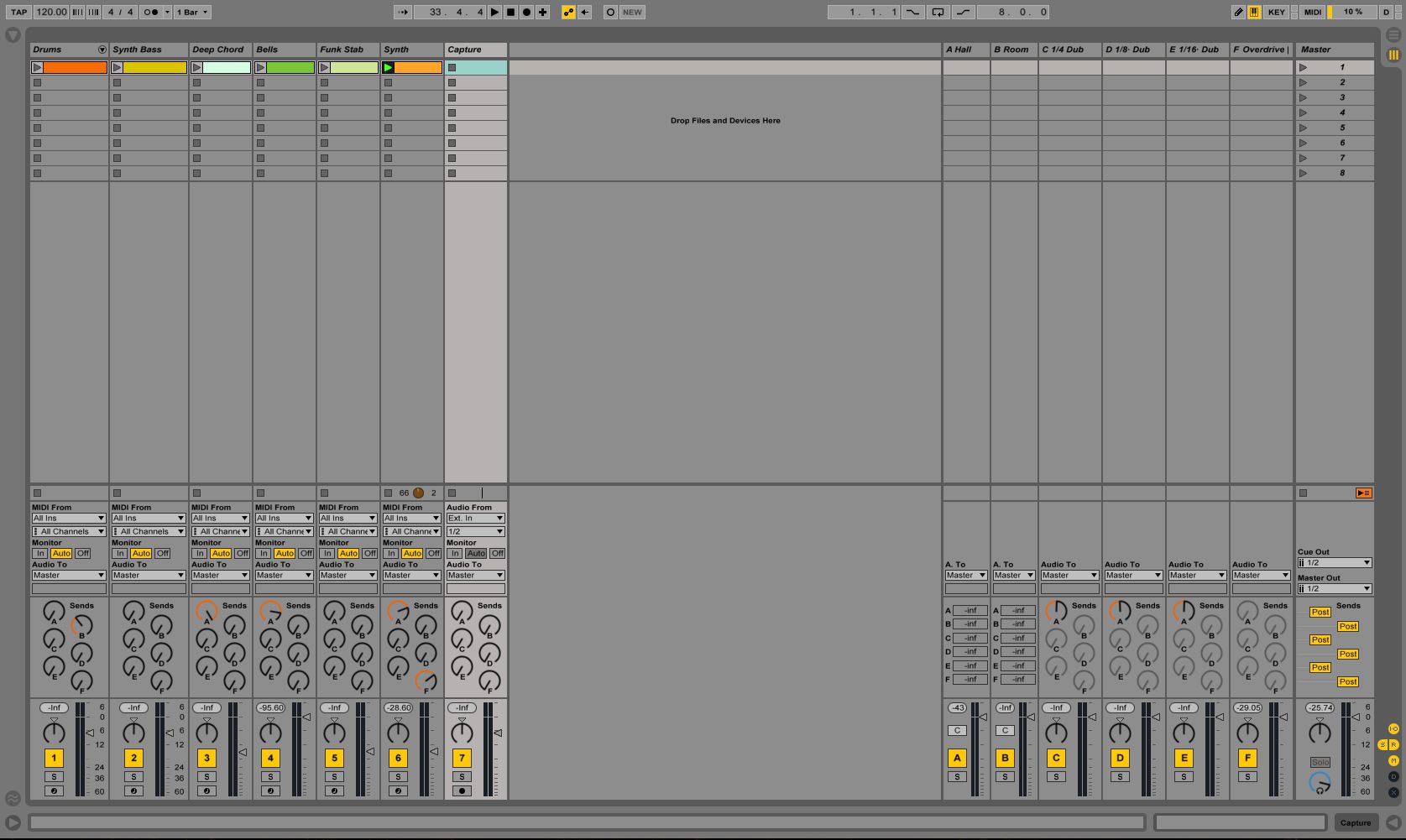 My next step will be to hold down the Shift key to make a multi-selection of all my Return channels, and, with all of them selected, change their Audio To routing in the In/Out routing matrix to our new track, labeled Capture (Pic 5). Of course, these channels could be re-routed individually, but why waste time? 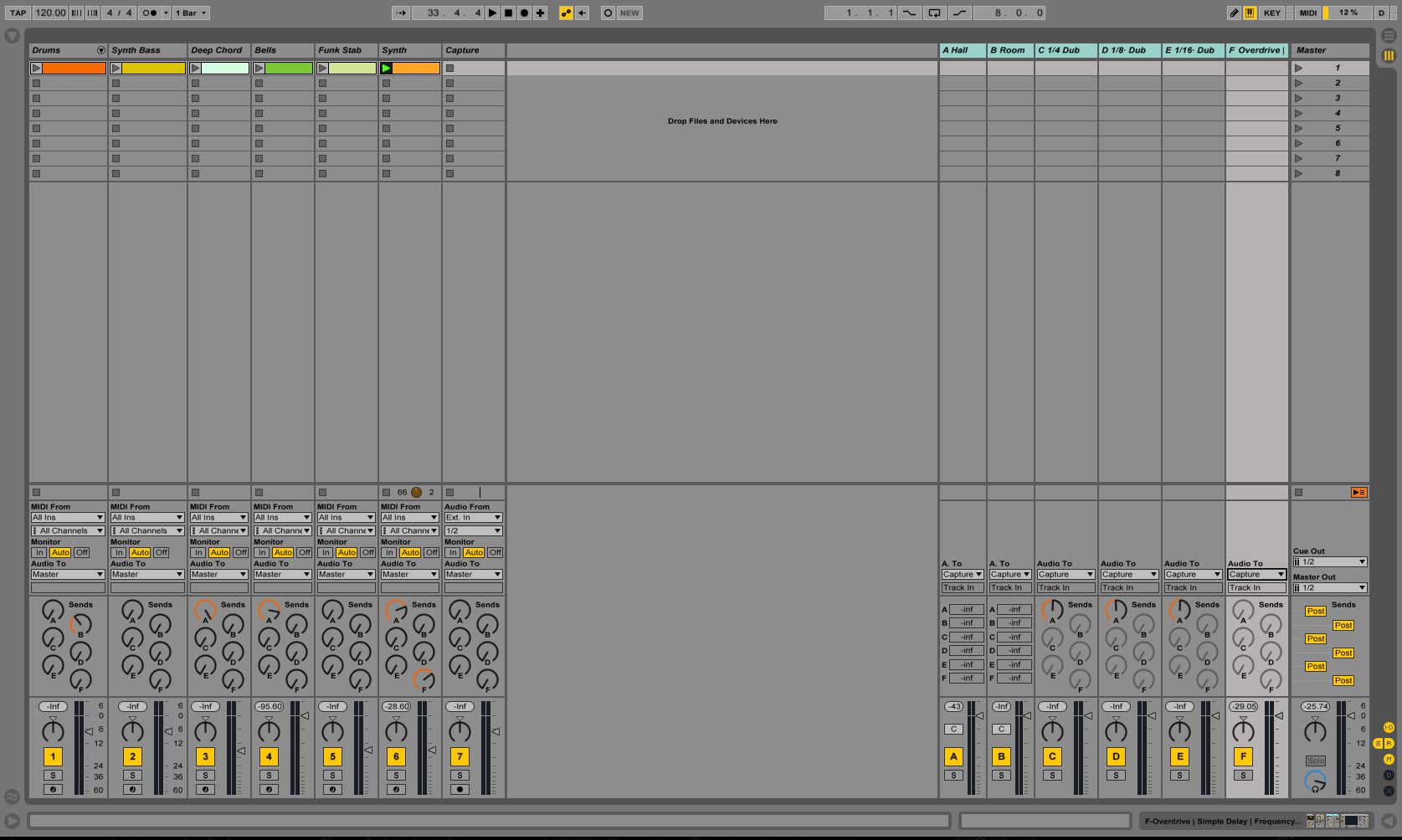 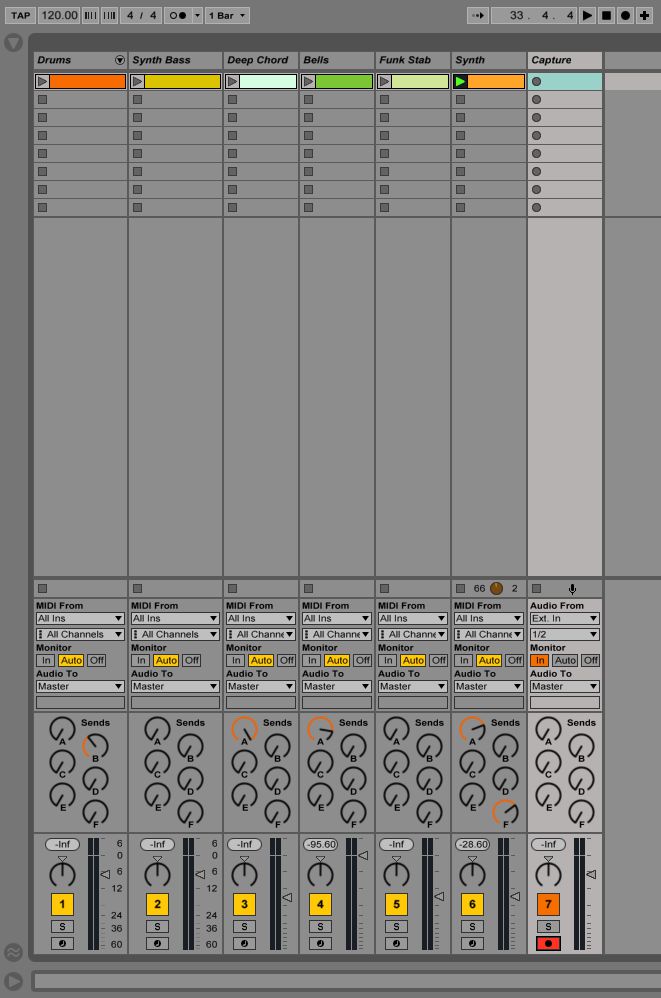 Now, with only the Synth track playing and the corresponding Send amount for our target Return track (in this case, F) set to maximum, we can initiate recording into a new Clip slot on our capture track (Pic 7). However, once we've recorded the desired audio, we should now create a new Audio track for it, and drag the newly-recorded clip from the Capture track over to the new, dedicated audio track (Pic 8), which I've here named Response. 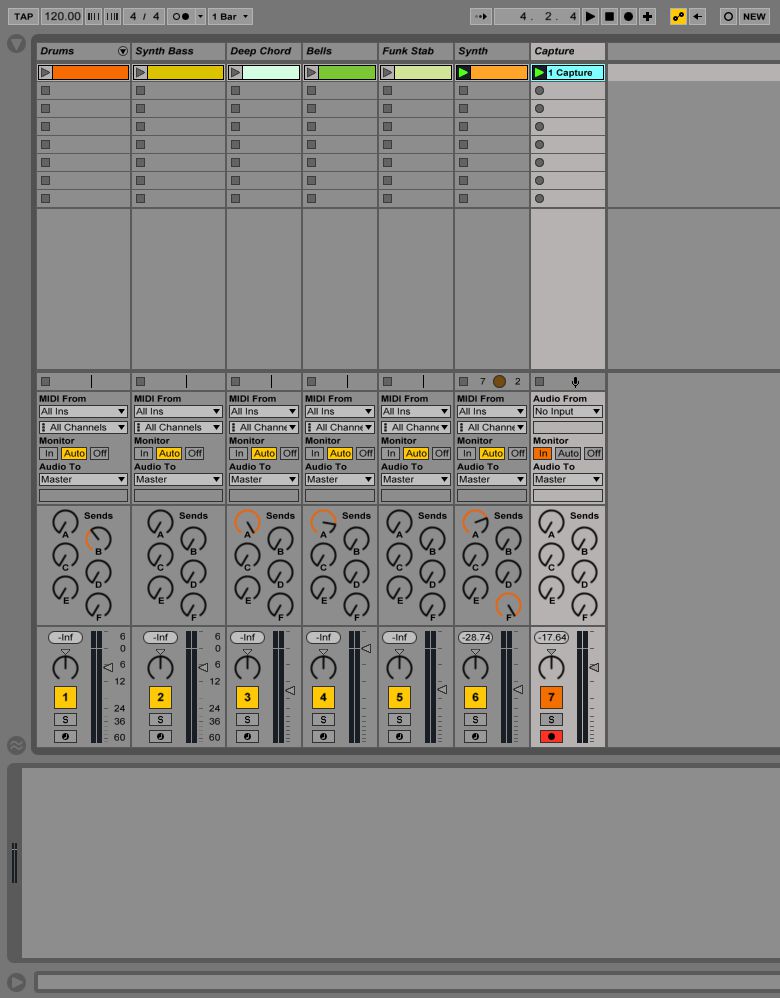 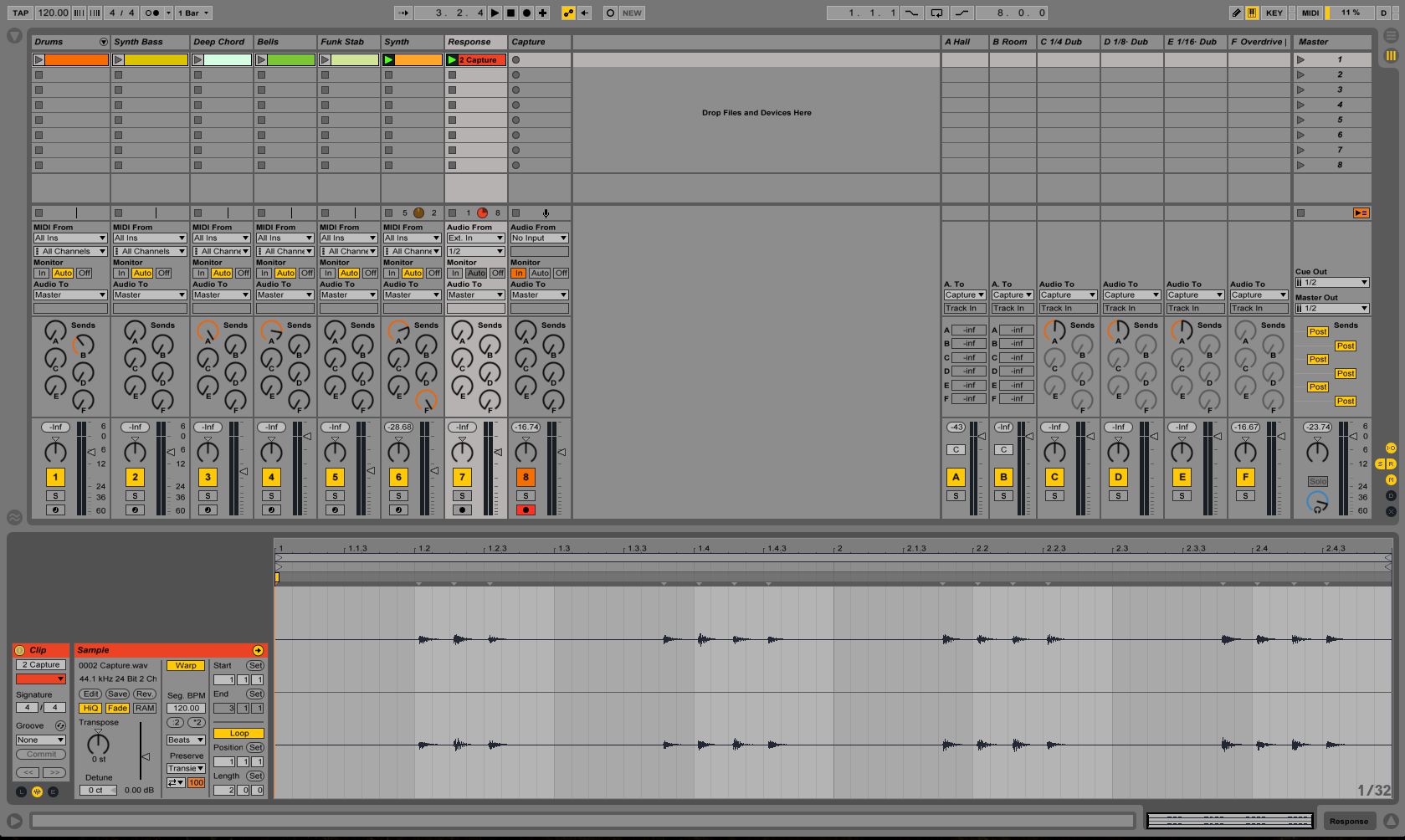 Editing the new Clip where I can hear it, I've quantized the audio and switched Warping into Tones mode (Pic 9). Next, I'll duplicate this edited Clip to a new slot, transpose it down an octave (-12 semitones), and switch it to Beats mode with some Transient playback modifications to achieve a shorter decay per note (Pic 10).

I'll duplicate this clip again, then reverse it, switch it back to Tones Warping mode, transpose it up an octave (12 semitones) and make some timing adjustments (Pic 11). In the end, I think this is the one I'll use.

At this point, I think it would be useful to have an element that will build into or introduce new parts of the song. I'll start by running my Funk Stab track through the dotted 1/8-note dub delay I have on Return channel D (Pic 12). Just as I've done with the previously captured element, I'll make sure no other clips are triggered for playback while I record it so that no other Return effects tails are captured. 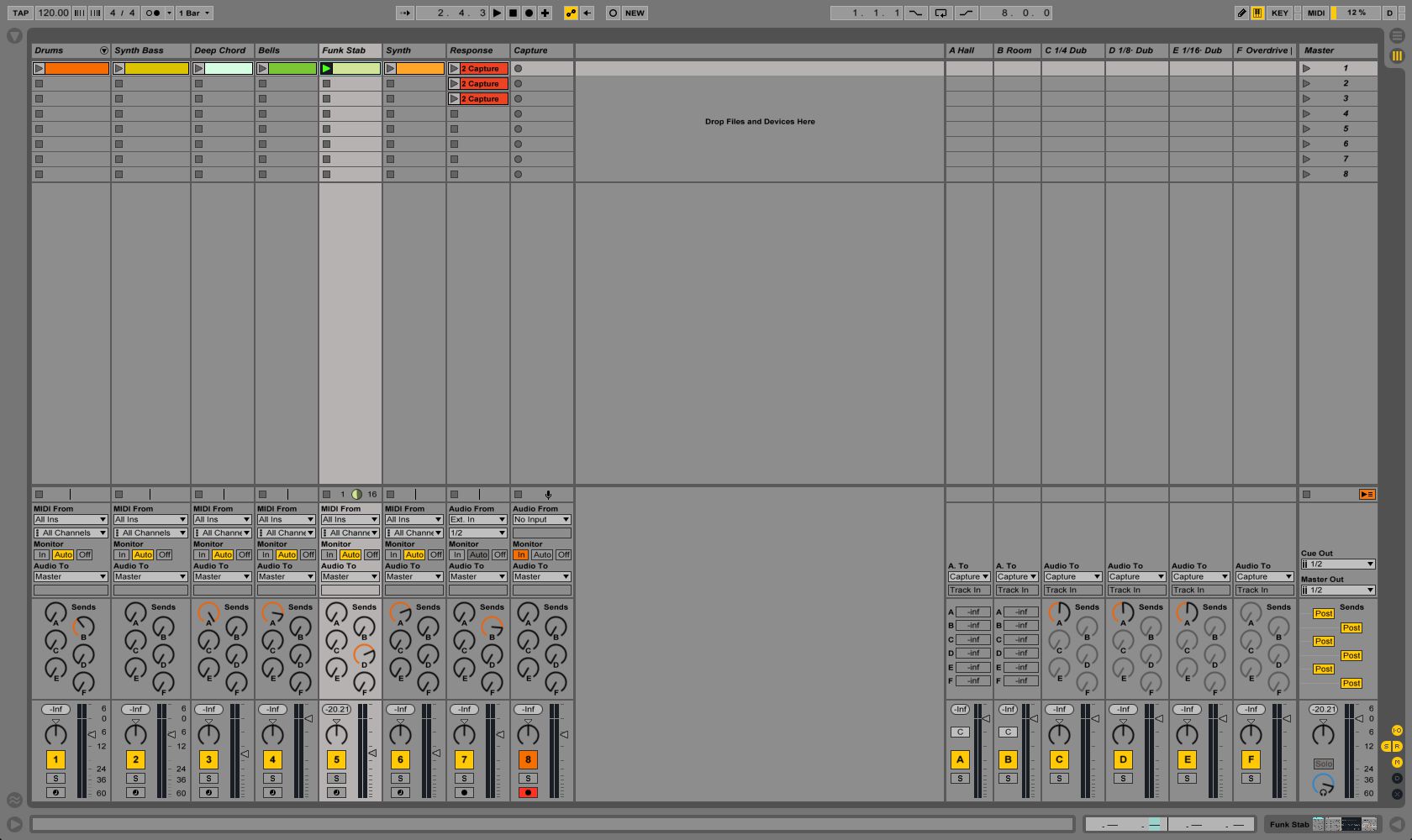 With the clip triggered and the transport stopped, I can begin recording by clicking the circle of an empty clip slot on our capture track. What's important in this case is that I stop playback of the Funk Stab clip after only one bar so we can allow the delay to trail off naturally – otherwise we'll end up with a rhythmic pattern as the loop continues to trigger the delay. I'll stop recording the delay tail after 9 bars to ensure we have at least 8 bars of delay feedback to work with (Pic 13). Now I'll create a new audio track, titled Echo Build, and drag our newly captured delay feedback audio clip to it. Next, I'll reverse the audio, transpose it up an octave, reduce the volume, and switch the Warping to tones mode for smoother playback at the higher pitch setting. Finally, I'll disable looping, set the end marker to 8 bars (Pic 14), and add some hall reverb to taste via Send A. Now we have a customized tonal build, derived from and tailored to the elements and tuning of our track. 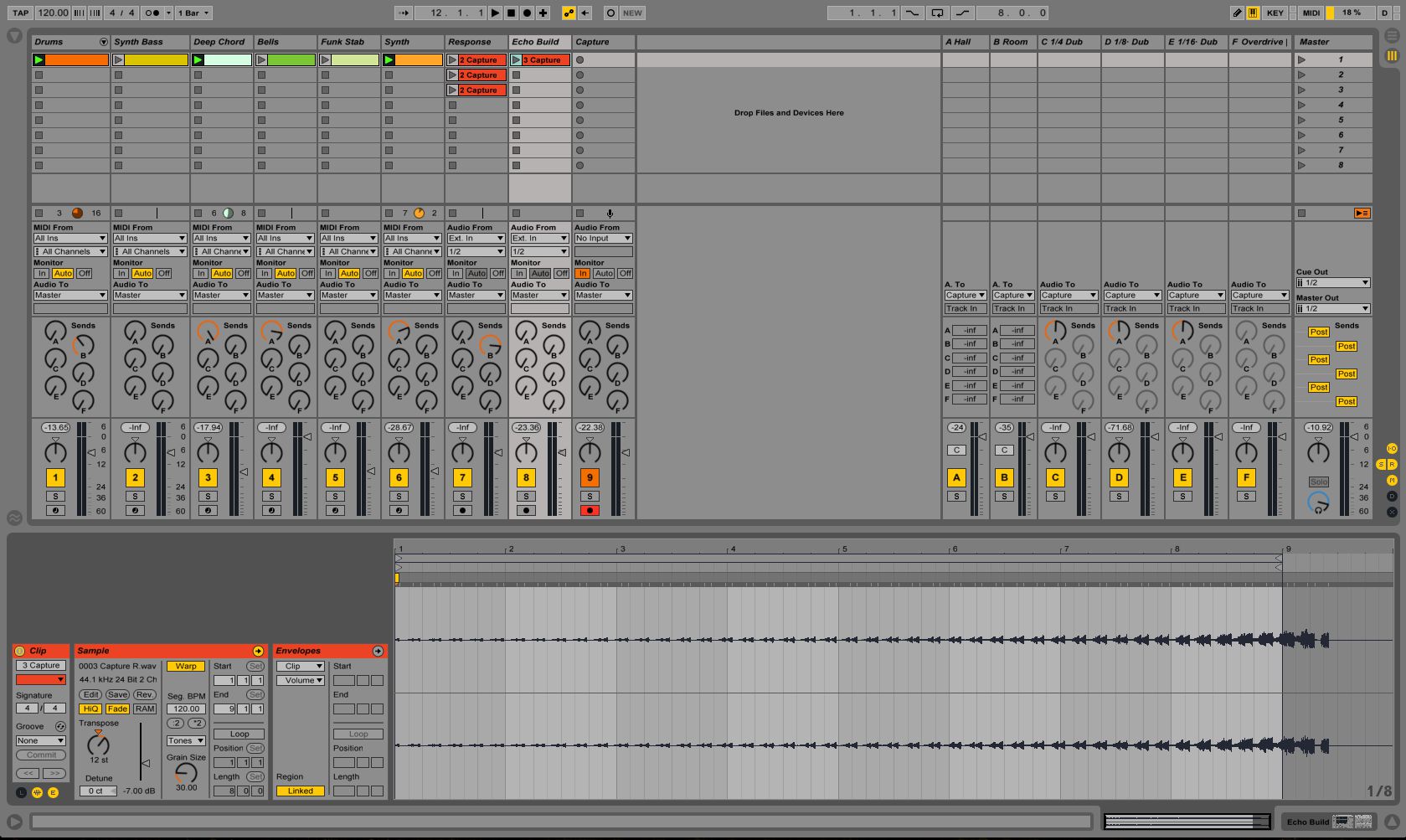 PRO-TIP: To add to this reverse-build effect, try running your stab (or equivalent) through both a delay and long-tail reverb before recording, reversing and processing it.

At this point, we've generated some unique melodic and transitional elements from our Return effects, but I feel the track is still lacking atmosphere – so I'll capture some reverb from our Deep Chord sound to use as a background pad.

First thing, I'll turn Send A on this track to maximum (Pic 15). With only our Deep Chord clip triggered and our Capture track armed, I'll then record a two-bar segment of ambient reverb (Pic 16). Finally, after moving it to a newly-created and appropriately titled audio track (which I've named Reverse Chord here), I'll transpose the clip 12 semitones up so as to differentiate it from the original tone, switch Warp mode to Tones with the Grain Size set to 100, and adjust the loop brace to a 1/2-bar segment (Pic 17). PRO-TIP: To make your ambience more dynamic, try adding modulation effects such as a Chorus, Phaser or Flanger.

Finally, the beats seem possibly a bit stale – so now I'll capture something more rhythmic to try and spice them up.

I'll crank the room reverb on my Drums track via Send B and record the result to our Capture track as per our earlier procedures, resulting in a 4-bar clip (Pic 18). I'll create a new audio track for it called Drum Noise, drag the new clip over, transpose it, adjust the volume and warping, and reverse the sample (Pic 19). Now I'll add an Auto Filter set to Hi-Pass to eliminate some of the lower frequencies, and place a Compressor on the track to sidechain it from the input of our snare accents on the 2 and the 4 (Pic 20). Sound design can be a rewarding creative pursuit unto itself, but you don't necessarily have to do all your design outside a production context. By integrating these techniques with your workflow, you should be able to find and generate all sorts of new sounds based on the work you've already done. While we've looked at a number of applications for this technique, we've barely scratched the surface; by getting creative with your initial Return effects, adding effects and automation to your captured audio, and even editing it into entire new loops and patterns, there's all sorts of ideas lurking just beyond the surface of your existing session. Don't be afraid to experiment.

theslyprofessor
I am still a bit confused about the advantage of putting effects on return tracks rather than just putting effects directly on your midi tracks. It seems that with the former way, you have to undergo additional steps to freeze audio whereas in the latter way you have a flexible midi solution.
Fracteria
You can process audio in a much more different way than midi. With return tracks you get audio to work with and there's much more flexibility than only midi. Example: Reversing a midi-clip sounds a lot different from reversing a audio recording from the original clip.