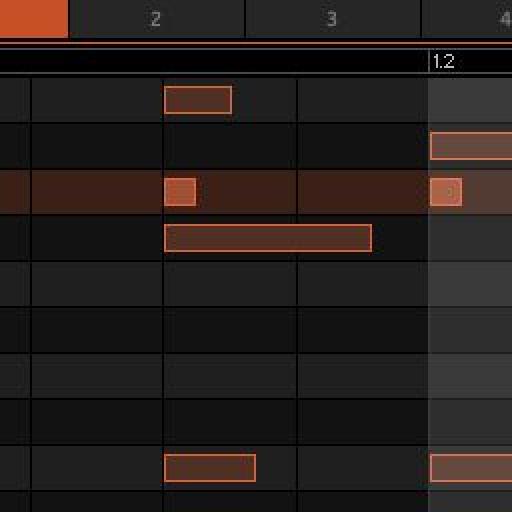 Language
Got some drums that sound a bit flat? Open the door and welcome in Maschine's new effects! Mo Volans shows how to use these to give your drums more life, attitude, and of course, pump!

The NI crew have added some seriously cool new tools to Machine 1.8. Not only do we have cray color coding, support for the new Mk2 hardware and native time stretching but there are also a couple of new effects on board.

Here we'll take a look at how the new Transient Master and Tape saturation effects can be used to pump up your drum track and add attitude to just about beat. Everything produced here uses Machine's library and internal effects.

I started by using a few of Machine's bundled kits to throw a beat together. There is nothing fancy here, no swing and no fills just an electro break. I've used around 10+ sounds to make up the picture and by the time I was done I was pretty happy with the result. The beat I constructed in Maschine.

There is some minimal processing on some of the individual sounds but this is simply what comes with the kits themselves. There is zero processing on the the two kits used and nothing on the master out.

The untreated beat ready to go:

The aim of the game here was to keep things as simple as possible so any processing applied would be easily distinguishable. Let's take a look at what we can do with the new bundled Transient Master effect when applied to a whole kit.

The Transient Master effect maybe a new introduction to the Maschine-O-Verse but NI have actually been using this effect for a while in their Guitar Rig set up. It's a solid transient design tool which lends much of it's sound to the legendary SPL Transient Designer.

Obviously as the effect is inside Maschine we are robbed of the pretty GUI seen in Guitar Rig but the operation is identical. Things are kept extremely simple here, with two main controls to sculpt our sound. 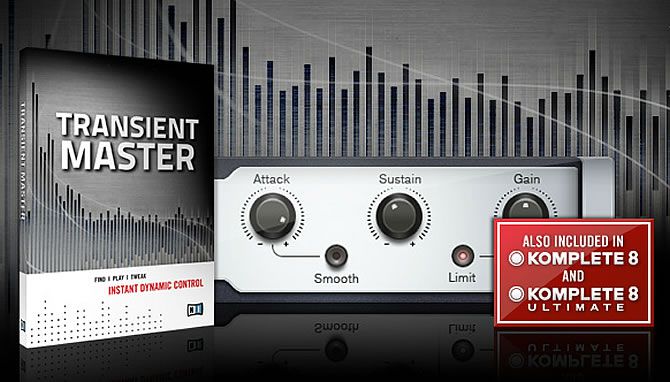 The attack knob is used to increase or decrease the intensity of the attack phase of any transients, while the sustain control does the same to the sustain phase of each transient event. 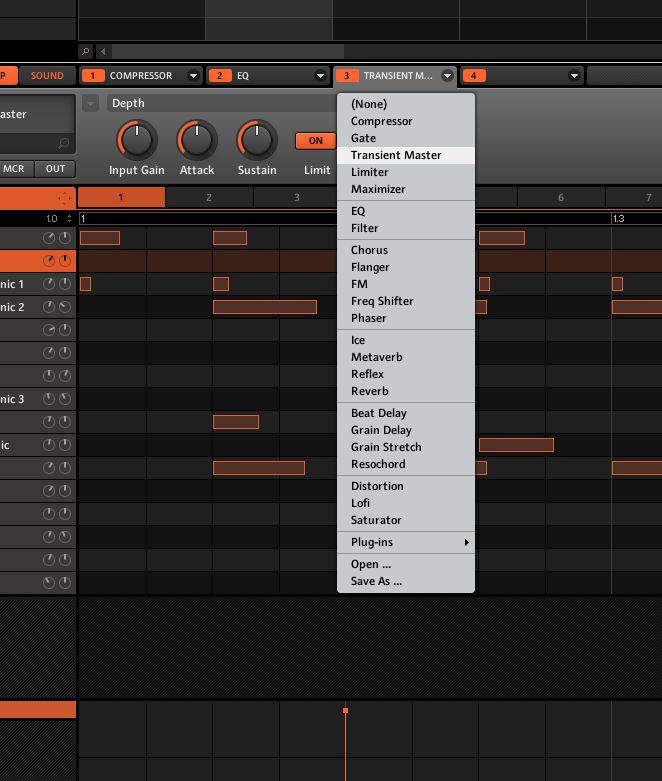 The Maschine based processor has a somewhat simpler interface.

What this means in real world terms is that you are able to make snares snappier, reverbs longer and kick drums fuller. At the opposite end of the scale all of these aspects can be toned down making sounds softer and more subtle.

In this case I've applied the effect to the entire main kit. In this first example I increase the attack but reduce the sustain. This produces an interesting gate like effect. While making the whole sound sharper we also remove a lot of the sustain and decay which tightens up the overall sound. 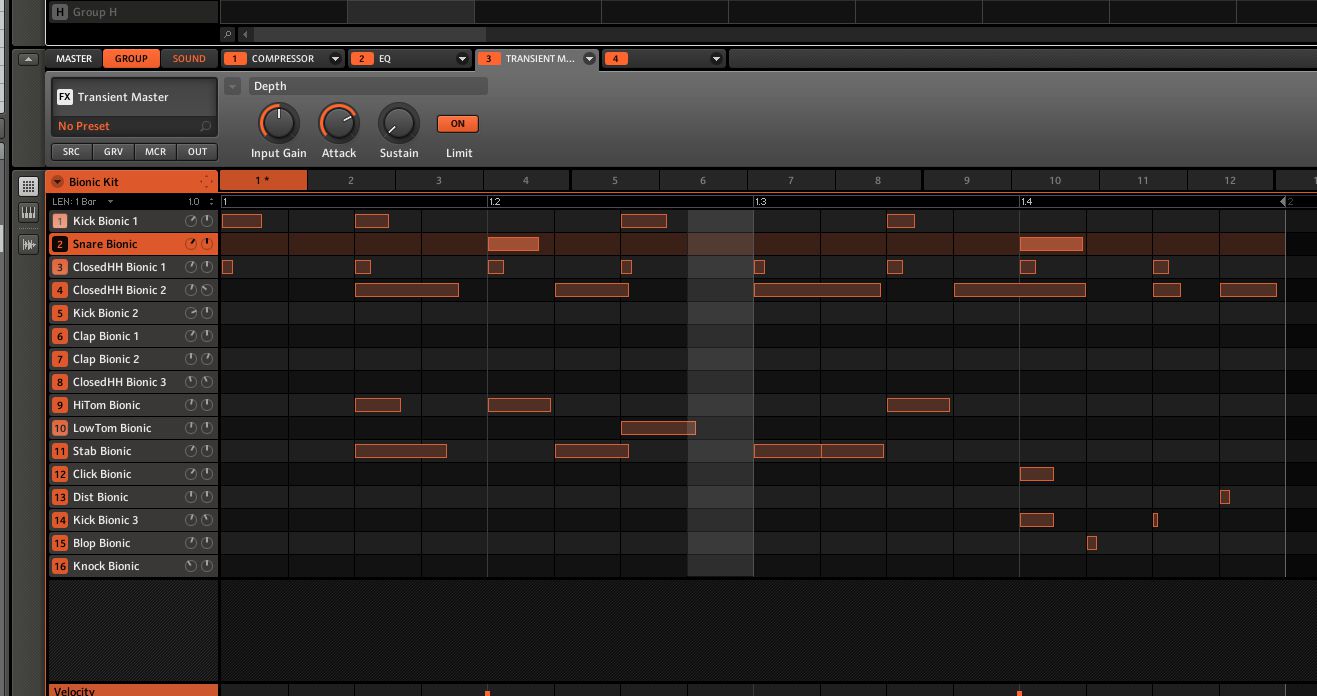 Plenty of attack is dialed in and the sustain is removed.

The extra attack can clearly be heard here: 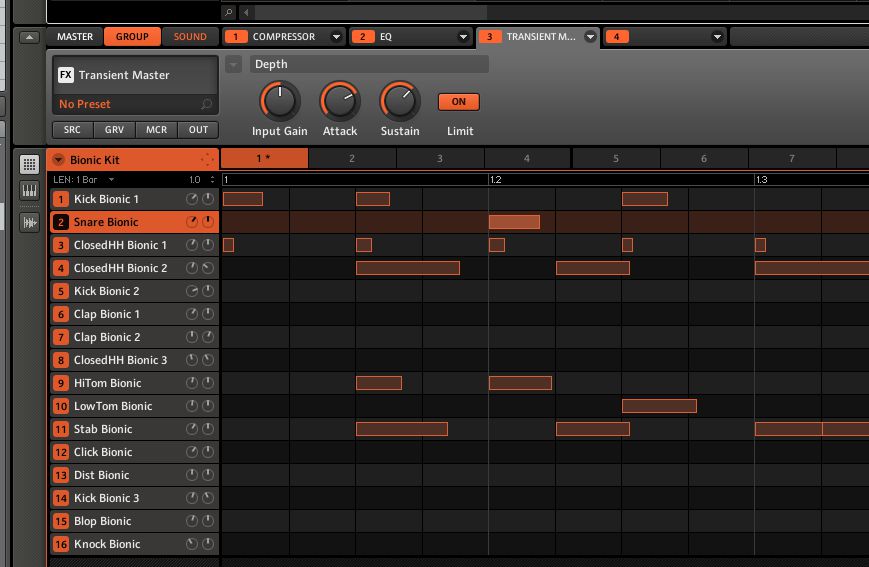 Both attack and sustain are boosted here.

The second example show the same effect but with the sustain cranked up. This is where the Transient Master really comes into it's own for drum processing. These two tweaks produce a sharper and fuller tone. With the final limiter engaged we also ensure that there are no serious overloads.

Another set of effects new to Maschine are the saturation processors. This actually shows as a single entry in the effects list but the mode can be changed once loaded. You have a choice of classic, tape and tube.

I've produced a couple of examples here. The first is a subtle application of tape based saturation across the entire master buss. You can clearly hear the added analog style warmth here. If you want something on the conservative side this would be my recommendation. 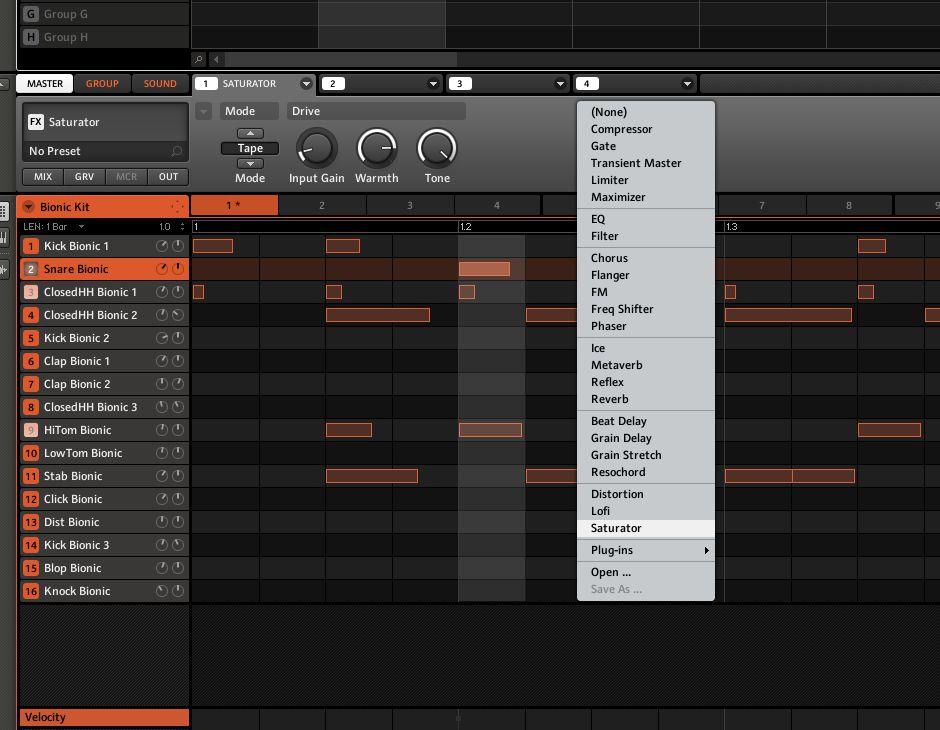 The new saturator is flicked into 'Tape' mode. 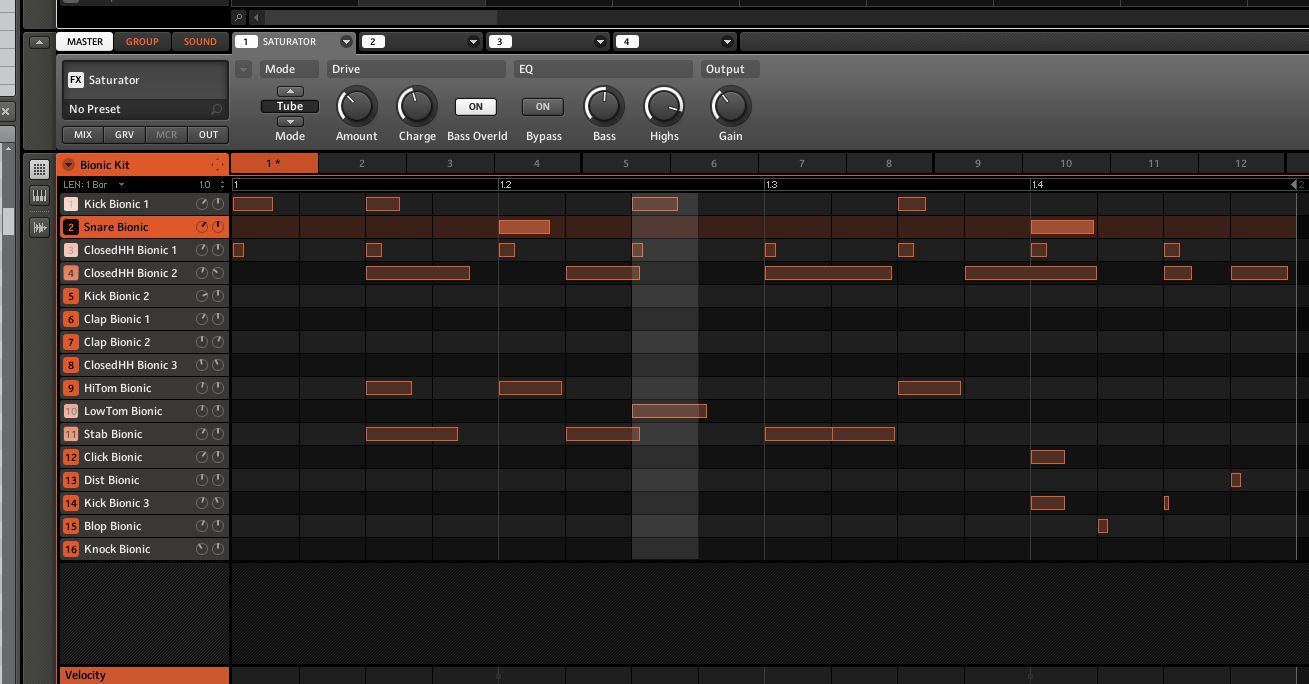 The low frequencies being boosted by the Tube setting:

For something a bit more extreme you can opt for the crunchier tube setting. Not only is this more full on but there are a considerable number of extra controls here too. One of the most interesting is the Bass Overload control. I had to engage this and you can hear it in action in the example above.