Superior Drummer 3 has way more going on under the hood than a shiny new interface and killer drum library. One major addition is that you can replace and convert drums to MIDI with the help of AI.

Yes, you read that right, the robots have come for your drums.

Tracker is an integrated offline drum-to-MIDI conversion AI that can automatically detect the kind of close mic drum instrument being imported into it, and then replace that live drum audio with a similar sound and velocity from the SD3 library. 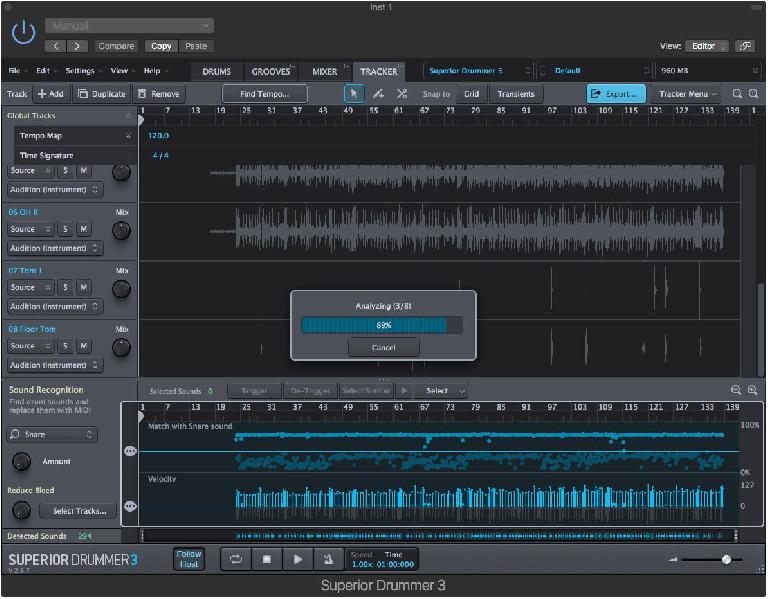 Drag and drop your close mic drum multi tracks into tracker and it’ll quickly figure out what’s what.

Not only that, you can further find hits that Tracker may have missed – often ghost notes or softer snare hits for example – by delving into the Sound Recognition Window where you can fine tune the search for similar hits and sounds. 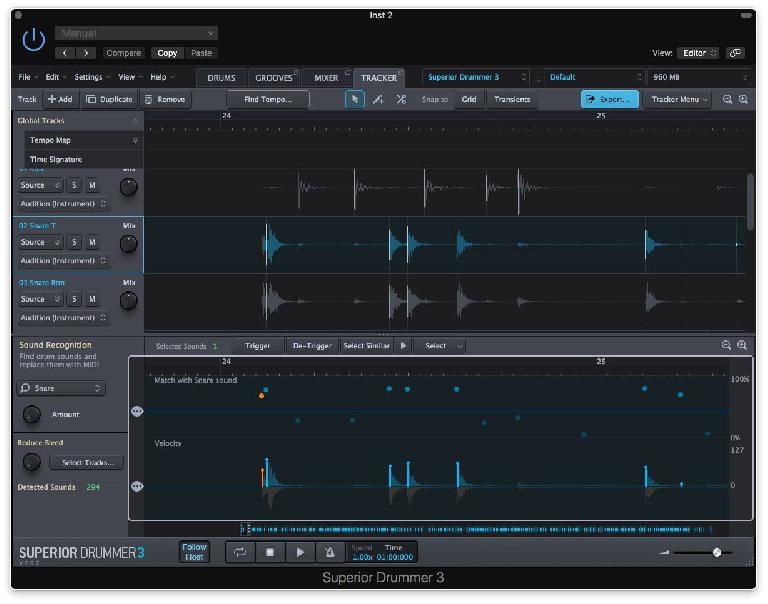 The blue dots are hits that Tracker is confident match the analysed instrument (here, top snare). Dots below the threshold line will not be triggered unless told to do so. Selected Dots turn orange.

You can fine tune the analysed drums via velocity, or by “helping” tracker recognise hits it may have missed. The higher up a blue dot is in the Sound Recognition window the more confident Tracker is of the sound source. You can select any one of the dots, even one below the threshold, and listen to it to see if it belongs. If it’s a hit that tracker missed you can tell Tracker to move this single hit above the threshold to Trigger with the other hits, or you can tell Tracker to “Select Similar” hits elsewhere in the file and add those as well. You can use the same process backwards to remove unnecessary hits too.

It is even possible to find and load the correct articulation for a single hit/replaced drum. For example Tracker may have loaded a center hit for the snare when clearly the original drum hit is an edge hit, or it missed an open hi hat or two. No problem, right click on the selected rogue hit and select the appropriate articulation from the drop down menu that appears. 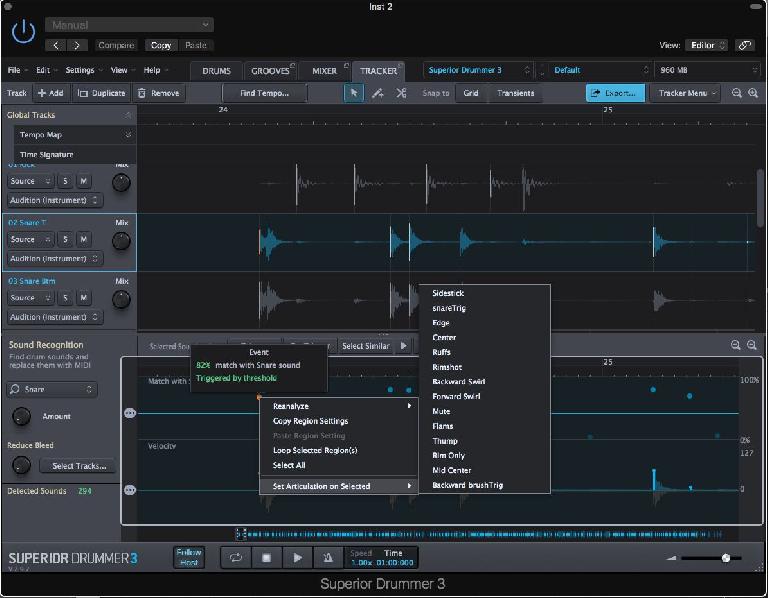 You can assign an articulation to a single selected hit with a right-click.

Once you are satisfied with your drum replacement/augmentation, Tracker has already converted the whole drum performance – all tracks combined into one MIDI file, and each individual instrument into its own MIDI file  – which means you can replace the whole performance or just the hi-hats or toms. You can then move it down onto the Song Track window for manipulation and fine tuning with the Grid Editor. 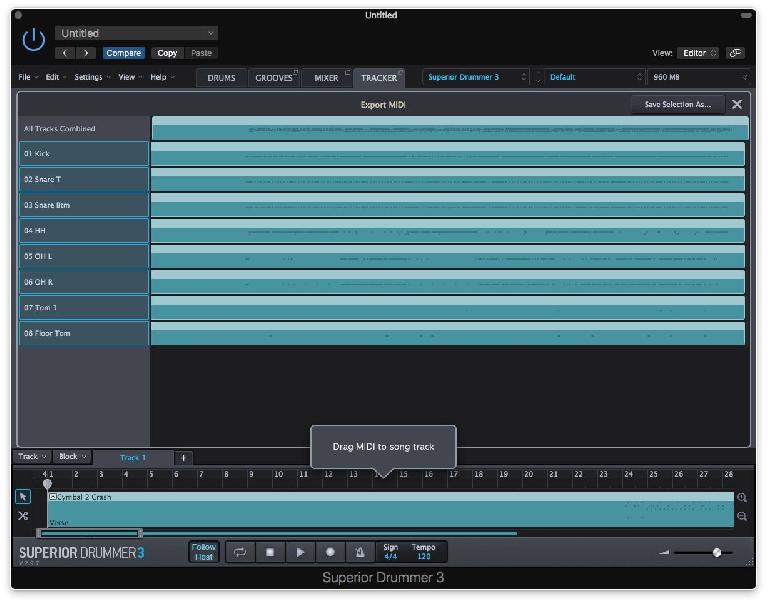 In the Grid editor you can further fine tune articulations to exactly match the original drum performance or embellish it with added fills, flams and other tweaks. If you wish, you can also drag the MIDI file/s out to your DAW and edit them there too. 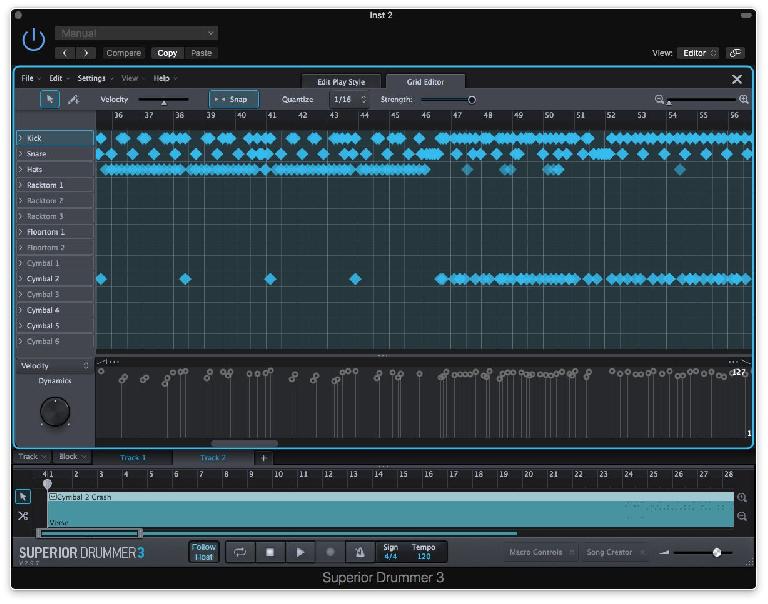 The built in Grid Editor enables full control over your own, converted grooves, and the bundled grooves in the SD3 library.

By moving the MIDI into the Song Track or DAW you are now also able to make full use of SD3’s enhanced mixer and the 35 new low-footprint FX plug-ins, but if you so desire, it is also entirely possible to route directly out of SD3 – in multitrack mode – to tracks in your own DAW to use your own tried and tested third party plug-ins as needed, or bounce the tracks out as audio. 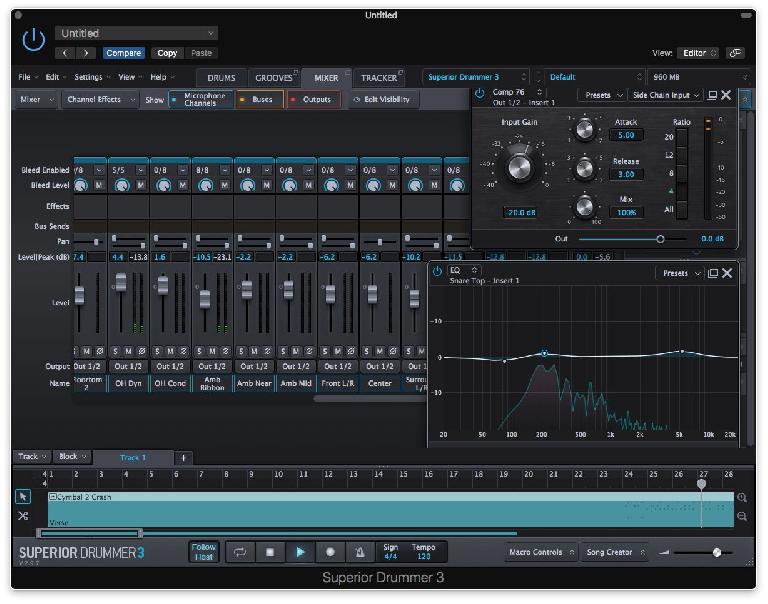 I am not great a drummer, but I thought I would show you how easy it is to use SD3’s Tracker AI to analyse and replace even the gnarliest of drums kits and drummers, and you don’t get gnarlier than this – Japanese chopsticks, a couple of boxes, a pot lid, and three cheap mics into a handheld recorder, played by me. 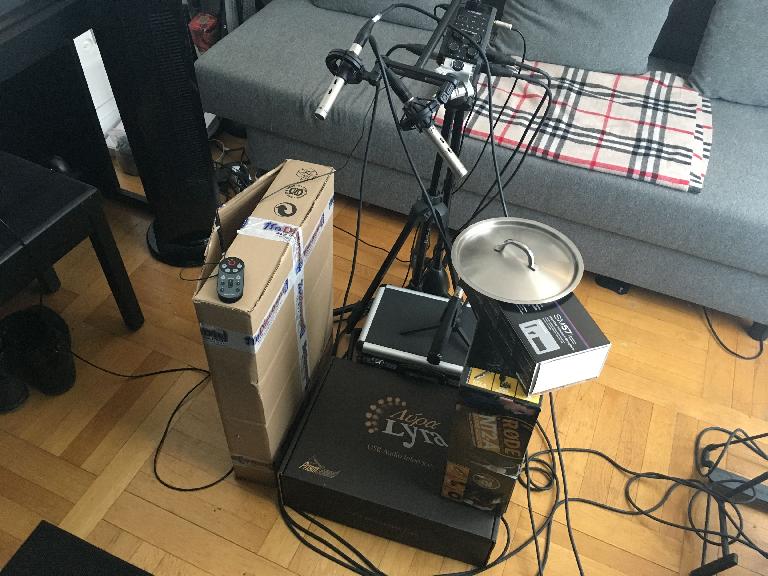 Japanese chopsticks, a couple of boxes, a pot lid, and three mics is enough to get a basic drum trigger recording for tracker to analyse.

So to be clear, it’s a three track recording of two cardboard boxes (one for the kick, one for the snare) and a pot lid (for the hats) played with chopsticks, by a non-drummer, and closed mic’d with three very cheap microphones.

I import the three tracks from the handheld recorder into my workstation computer and then drag and drop those three tracks into Tracker. 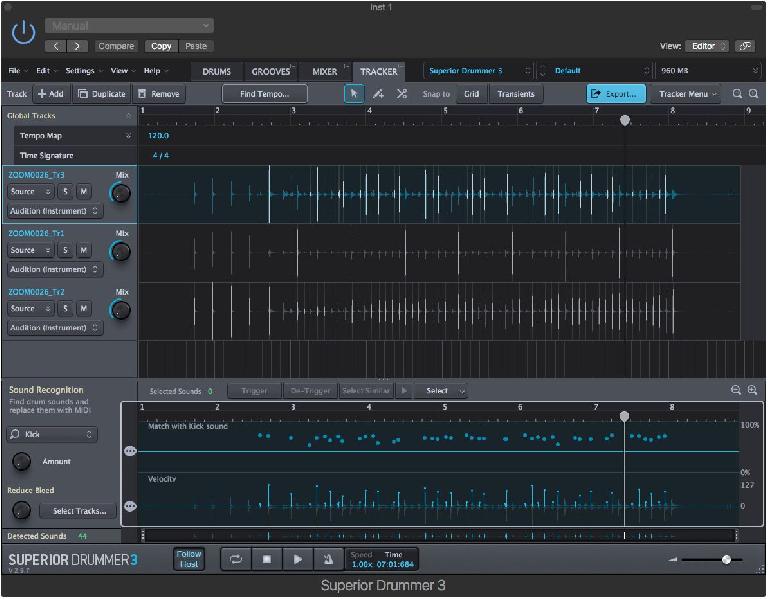 This is what the cardboard kits looks like after analysis. 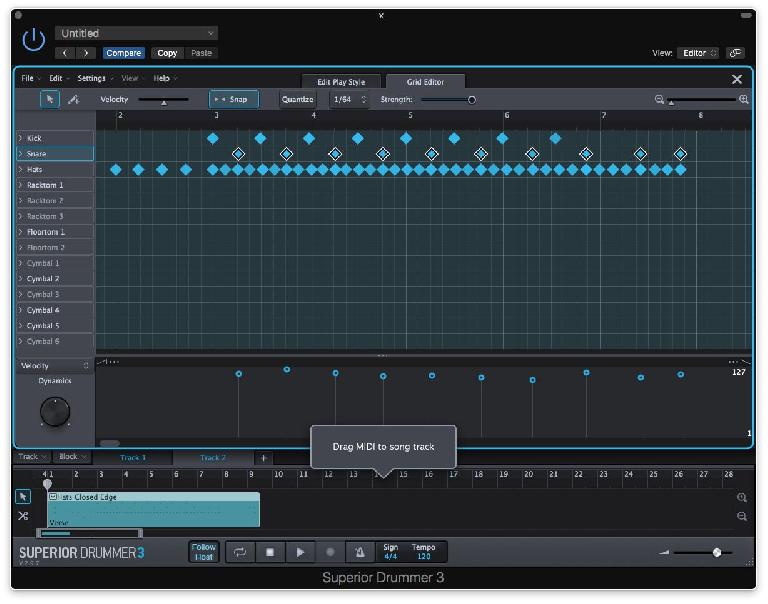 So far so good. Now it’s time to clean up my sloppy playing. In this case I am ditching the original, crappy cardboard recordings and heading over to the MIDI conversion to edit the MIDI in the Grid Editor.

Lightly cleaned up and timing adjusted, it looks like this: 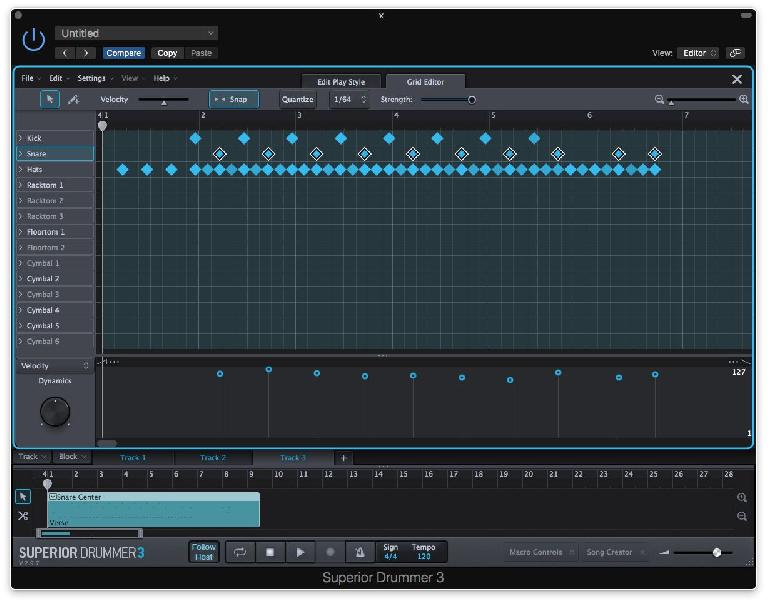 And I get this:

Okay, so now we can start embellishing and enhancing my playing, building on the very basic triggers recorded from cardboard. 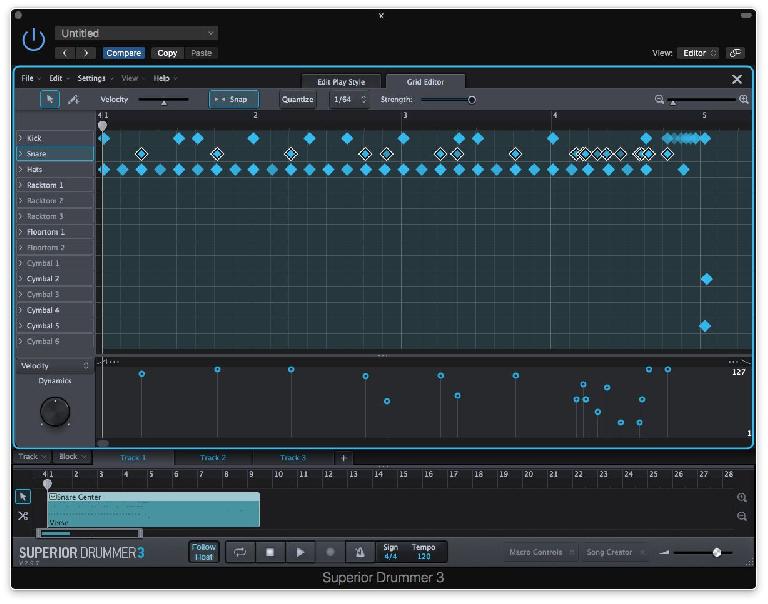 Okay so it would need a lot more finessing, but you get the idea. Bear in mind at this point that I have not exited SD3 once since loading the files into Tracker, this is all being done within the plug-in.

With that in mind, now that I have switched over to the edited MIDI file, and pulled it into the Song Track section, I now have the Mixer and all its tools at my disposal.

So let’s add a finishing touch to our little cardboard box experiment; some parallel compression, tape saturation, and a bit of EQ: 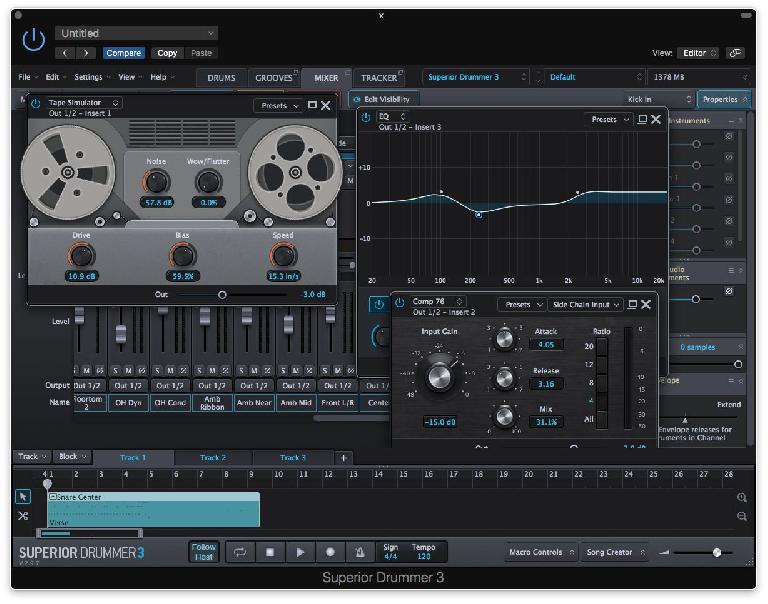 Not bad for a few hours work with some cardboard boxes and some mics – now imagine what is possible with an actual drum kit and drummer, not to mention the myriad sound design possibilities with SD3’s other features like the ability to load third party samples, its extensive automation capabilities via its one hundred macro controls, and so much more.

By the way, just in case you’re the thinking that this demo beat is more simple than a toddler’s two piece puzzle, which it is, here’s a more complex snare pattern played with the chopsticks and cardboard and then replaced by Tracker:

Tracker’s drag and drop snare replacement with no further editing:

For a more in depth overview of all SD3’s features, check out our world’s first review here: https://ask.audio/articles/review-toontrack-superior-drummer-3