Language
Your Korg volca keys can easily make short techno stabs and blippy synth sounds, but it can do more too. G. W. Childs demonstrates how to create pads and strings using this powerful hardware synth.

When most of us think of the volca line of synthesizers, from Korg, we usually think of short, bouncy, techno, synth sounds. And, electronic drums, of course. Now, this is mostly true. But, volca keys is actually capable of a few forms of sounds that may not be obvious at the start. In this particular tutorial, I'm going to show you how to use volca keys as a Pad/String machine, and even show you a few other tricks to get some additional sound out of your volca keys.

Before doing anything, let's clear our existing pattern by using the FUNC+Clear ALL command, shown below... I'd also recommend turning down the Feedback knob of the Delay, all the way (not shown). And, setting the Octave Range to 4'. Finally, it might be nice to keep the Cutoff up a little higher, in the VCF section, just to keep things more crisp, and audible. 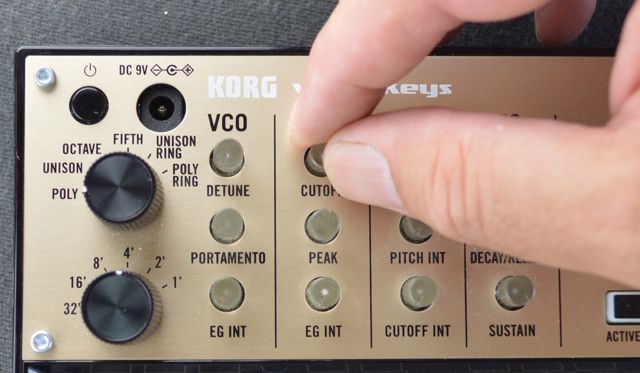 Now, let's get to some magic. In the EG area of volca keys there are three knobs that play a major importance in the way that volca keys reacts when one of its 'keys' are pressed. For example: If I raise the Attack, the keys don't play instantly anymore. In fact, the sound slowly fades in, depending on how much attack you've added! 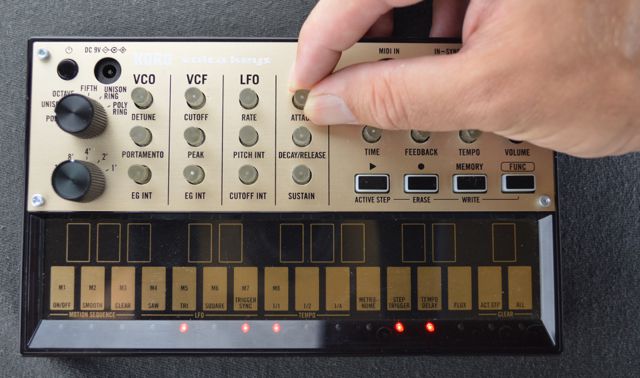 The Attack setting, even in small, incremental amounts is one of the first settings to come in to play, on any synthesizer, when you're creating a Pad/String type sound. After all, when you hear low, rumbling, string orchestrations come in, darkly, within a movie, they don't just pop in. It's slow, gradual... It creates a new energy in the sound one that is darker, more seductive, ambient. 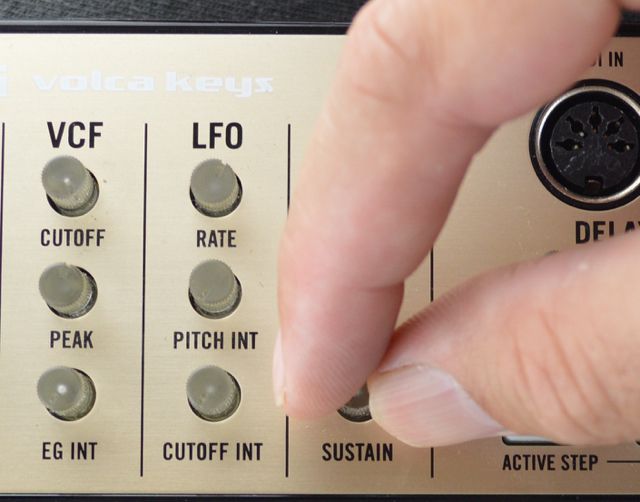 See? It's a very different synth, all of the sudden! But, there's more! If you raise the Decay/Release, notice how at higher settings, any key pressed will continue to be heard after you let up. Now, go ahead and raise the Sustain back, all the way up, and let's proceed!

Depending on which mode you're in, the sound and the abilities of your Pad/String enhanced! For example: if you switch to Poly mode, now you can actually hold down up to three keys at once and play a chord. 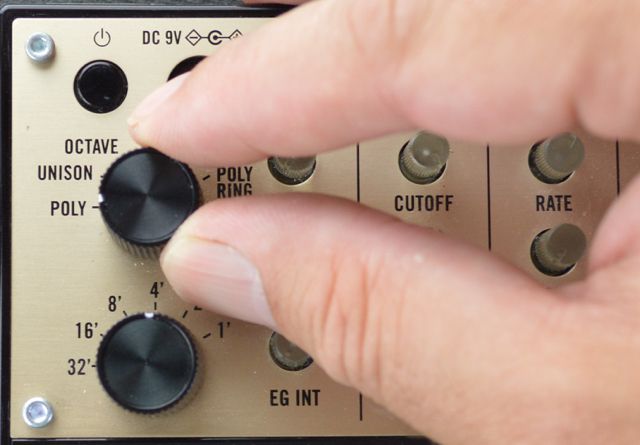 Having 3x note polyphony (a proper way of saying that you can play three keys at the same time) is very cool, because it gains you the ability to record chords, or even stabs. But, the only downside is that the sound is very thin. In other modes of volca keys, the 3 notes that you're using to play different notes at the same time are being used to double, or even triple the single notes you play in. And, because you can Detune the 3 voices... well, things can get very fat. Let's talk about this now...

While still in Poly mode, try adjusting the Detune knob, within the VCO section of volca keys. 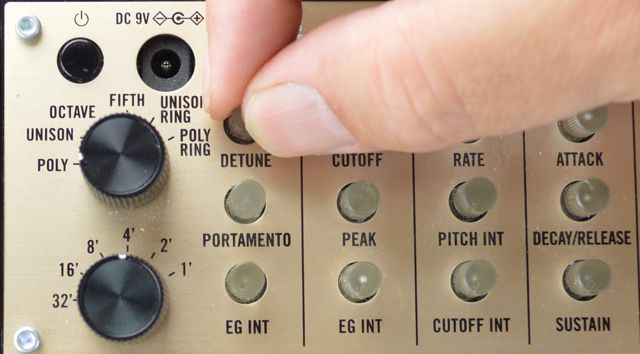 You'll notice that if you only hold down one key on volca keys, and adjust Detune, you won't hear much difference. However, if you try adjusting Detune while holding down two keys, or three in Poly mode, all three of the VCOs/keys/tones that are responsible for one chord will begin to detune. Unfortunately, this doesn't sound that great. However, if you now, try a slightly different approach; put volca keys in to Unison Mode, and adjust the Detune knob the lowest to the highest setting a couple of times. Notice how much thicker the sound gets!

At this point, if you've tried programming sustained chords on the volca keys, using its internal sequencer, you've probably run into some frustration. There's not really a way to edit notes that are on top of each other, aside from just using FUNC+Clear, or FUNC+Record. Truth be told, I don't even attempt to program pads with the internal sequencer of volca keys. Instead, I use Ableton to trigger volca keys through MIDI. This is an excellent practice, as it's not only tough to program chords on volca keys, but it's also hard to play chords on it! Notice how the keys cut out, as you move across the gold Step Buttons. 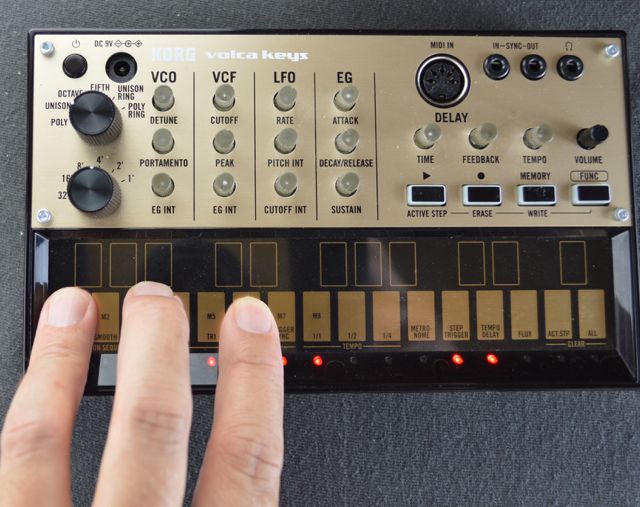 If you use MIDI, though, volca keys can be played as smooth as silk. You can even use a MIDI keyboard controller to play volca keys, like a regular synthesizer! 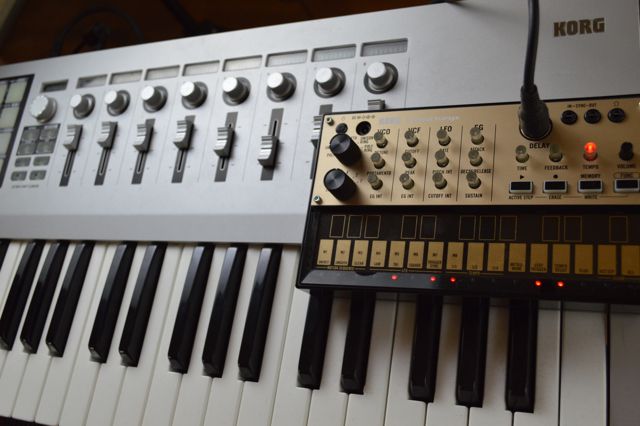 And, if you want things even thicker, I would highly suggest running volca keys through some of your favorite plug-ins, in real time, or after recording. Through small amounts of effect like Reverb, Chorus, and at time, more complex plug-ins like FilterShaper3 (at the end of the recording) can completely change the sound of volca keys to something ominous, beautiful and powerful. Check out this example, below!

Who knew that a $150 dollar synth could add so much to the table, while still being travel friendly and uniquely stylish. And, it even runs off batteries! That's why keys, beats and bass are all permanent parts of my live and studio rig. And, that's why I just had to share what I've been doing with you! And, hopefully, from here on out, this will spur you in to some creative, sound design of your own, with volca keys.

Learn tips and tricks for the Korg volca beats at AskVideo.