Top 4 Audio Interfaces You Need To Take A Look At

Language
Matt Vanacoro, recording musician, live performer, trainer and writer, takes us on a tour of 4 exceptional audio interfaces we ALL need to know about.

Audio interfaces are maturing rapidly into devices which are more powerful, more flexible and more interesting than they ever have been. A device which used to do a single thing—get sound into your computer—now can come with a host of features to streamline your workflow, jumpstart your creativity, and save you a bunch of time in editing. Let's look at 4 specific interfaces that are helping to set the bar in terms of what they offer to musicians.

The UA Apollo Twin has a whole lot to like about it. The chassis is sleek and sexy, it's intelligently designed, it has a UAD chip inside it and you get 2 great UA mic preamps! It has an ADAT port to accept 8 additional inputs (which pairs up nicely with their 710-D mic preamp) and uses Thunderbolt connectivity. All that is great, but the flagship feature here is access to both the vast UAD plugin library as well as the new Unison Mic Preamp library. 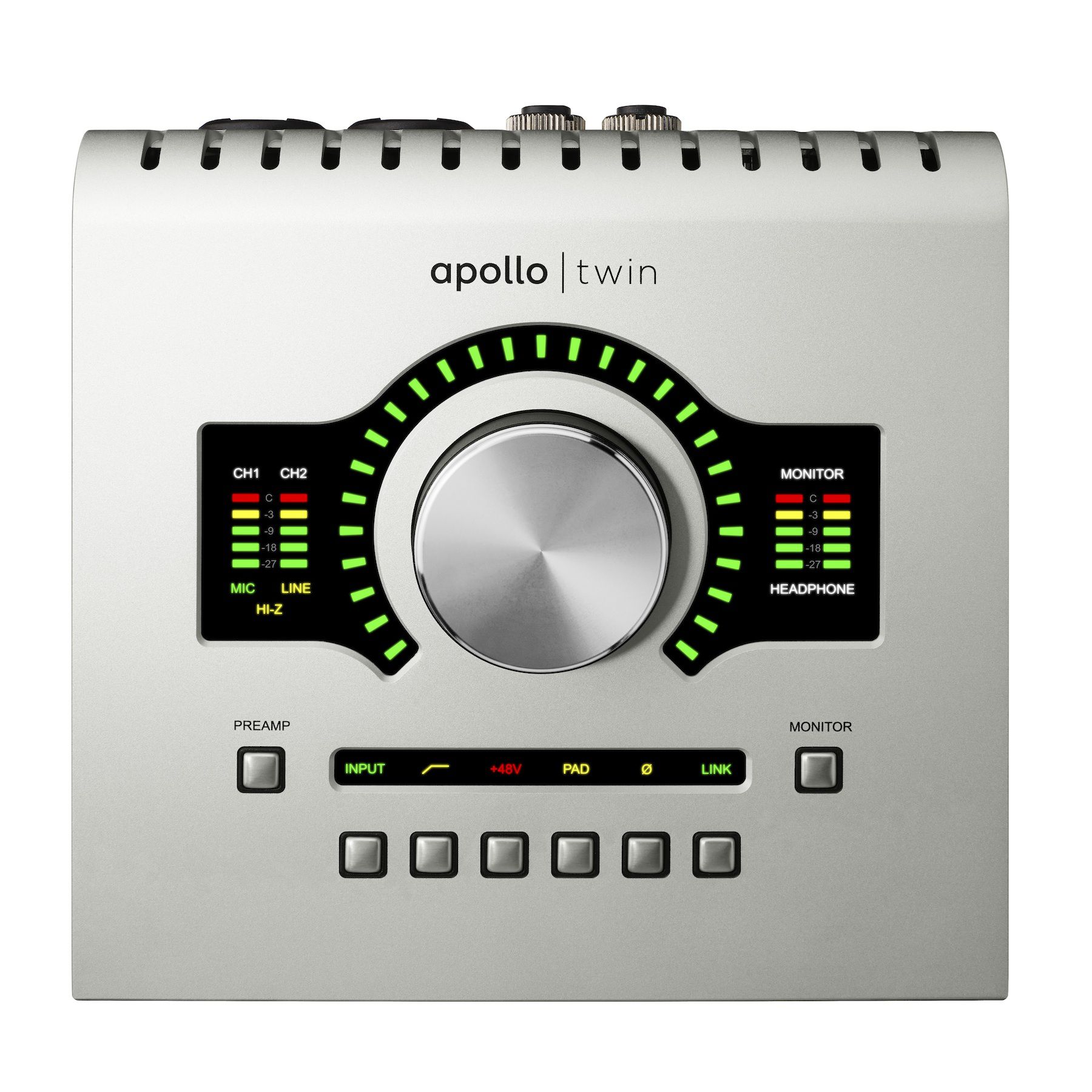 UAD Apollo Twin - The Unison technology on the Apollo Twin works as advertised—the sonic versatility of these preamps is just amazing.

The plug-ins are powered by the Apollo Twin, so the processing burden is lifted from your computer and placed on the audio interface. You can actually record with UAD plug-ins and experience no discernible latency. The preamps are also digitally controlled analog, and they model classic preamps of old. Instead of using a plug-in that simulates the impedance level and gain-stage of a classic preamp, why not call up a Unison preamp model that actually changes the physical behavior of the preamp on the Twin? It's revolutionary, and the sound is incredible. Check out our in-depth review here.

I've yet to find an Apogee interface, no matter the price level, that isn't crystal clear and noise free. The Apogee One is a great way to get into the Apogee line of products at an entry level price. However, nothing about the One is entry level! The mic pre is pristine, the included software integrates into OS X at a level many other interfaces can only hope for, and the physical design is aesthetically beautiful.

Apogee and Apple have always been close partners, and if you're using GarageBand or Logic, then support for the One is extensive. It just feels like it was built specifically for your Apple device. The One also works flawlessly with iOS devices, and will even charge your iOS device while in use. 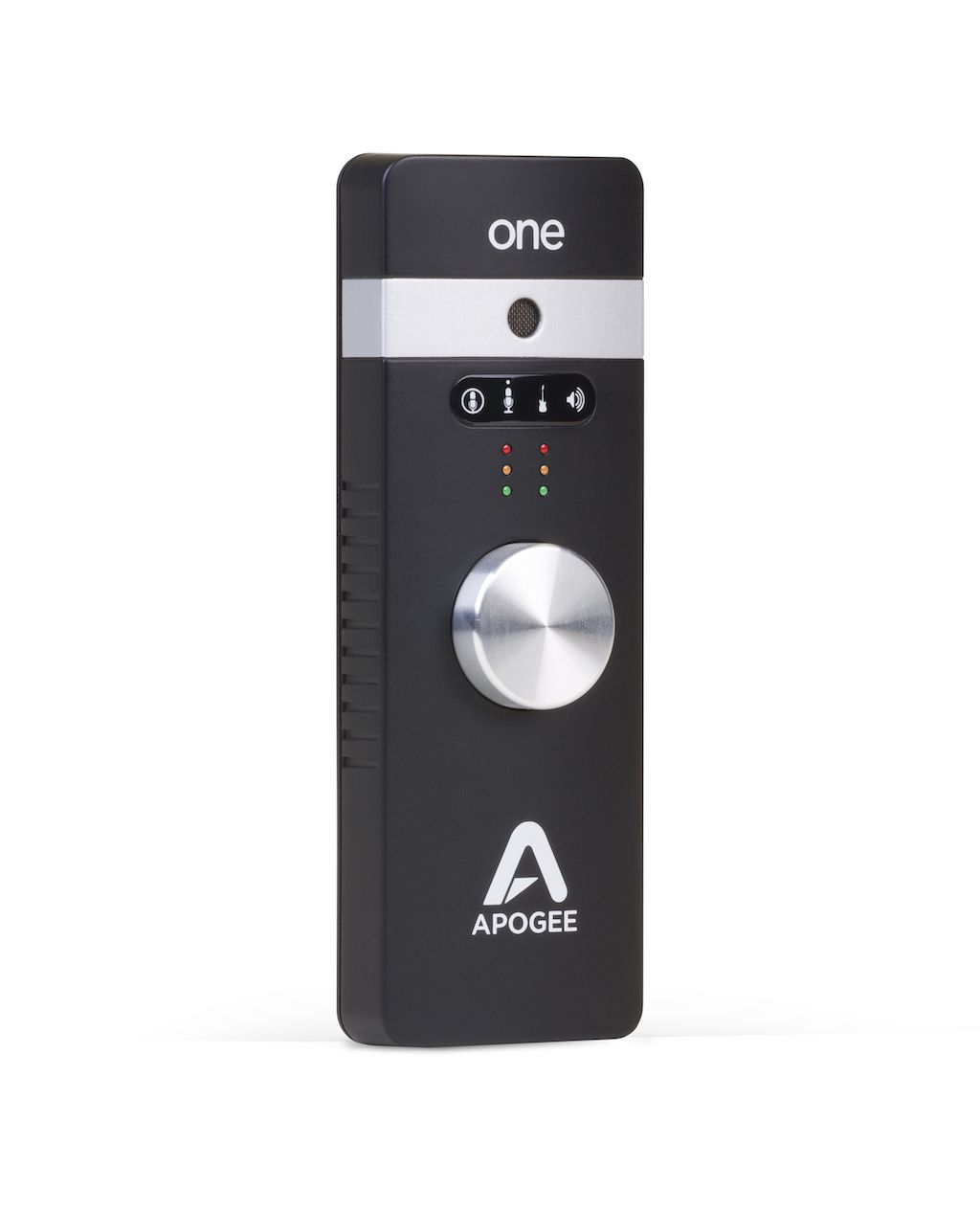 Apogee One - The Apogee One is not only a high-quality audio interface, it doubles as a microphone as well!

One of the most unique features of the One is that it actually has a built in microphone. You read that right—a microphone is actually baked directly into the interface. It's a studio-quality condenser mic and the One comes with a mic clip that actually allows you to mount the interface like a microphone. So cool.

The 828 from MOTU is a legendary piece of gear. It was the first FireWire audio interface available, and MOTU helped shape our expectations of what an audio interface could and should be. The 828x is a Thunderbolt beast that allows you to get an unthinkable 58 streams of audio I/O going in a single interface. Dual ADAT optical ports, rugged XLR main outputs, 192 kHz recording and two incredibly flexible mic inputs with hardware limiting and a ton of headroom. 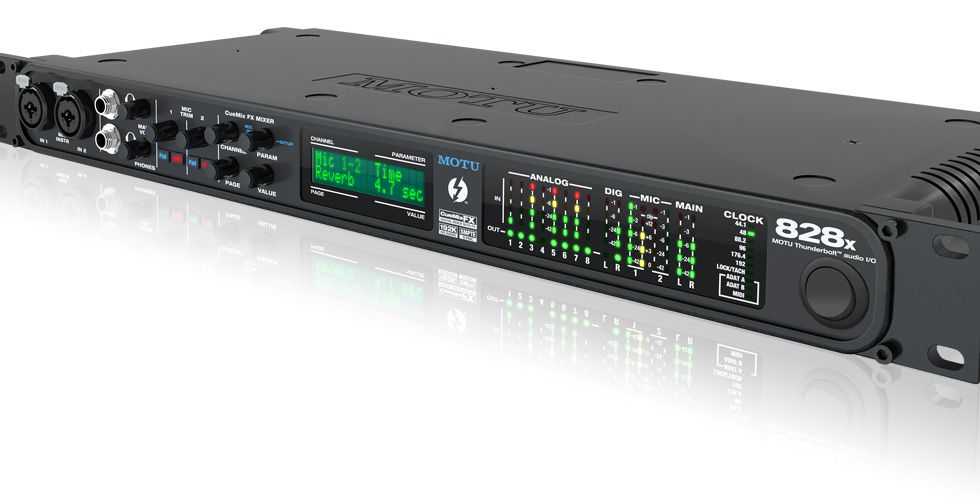 MOTU 828x - The rock-solid reliability and pedigree of MOTU now with Thunderbolt.

One of my favorite features of any MOTU audio interface is the wonderfully capable Cuemix FX digital mixer. Setting up no latency monitoring with or without effects on every single input and output is a breeze. The device will even 'remember' your presets regardless of the computer you are hooked up to, so you can feel free to take your favorite recording and monitoring configurations with you! The 828x offers a seamless experience when transitioning from home studio to mobile use.

RME has had a reputation for interfaces that provide extremely high quality A/D conversion along with large numbers of inputs and outputs. The Fireface 802 is no exception. With a staggering 60 channels of audio, 4 high-end microphone preamps and the legendary RME analog-to-digital conversion the 802 is positioned to be the 'must-have' interface of 2014. TotalMix FX, RME's digital mixer and signal router that allows you to send audio just about anywhere you can think of, is also included. The iPad version allows full control of the interface through iOS.

RME Fireface 802—The Fireface does double duty as an audio interface and studio monitor controller.

The Fireface 802 has a built in monitor switcher and source selector with integrated talkback. Any hardware output of the 802 can be assigned as Main or Phones output, allowing you to connect it to several sets of studio monitors. Talkback, listenback, mono, dim, recall, and external input are all available on any of the assigned outputs. You can even connect an RME Advanced Remote Control to give you direct access to all the monitoring features with a physical controller. You get the benefit of a studio monitor controller without having to put anything between your interface and monitor speakers!

It's an exciting time to be in the business of writing, producing or recording music. Devices which give you the ability to get that 'downtown sound' are finally within project studio budgets. Racks of outboard gear are quickly being replaced with single devices that have multiple functions. Getting sound in and out of your computer can now be a pleasurable experience, and you truly have the ability to emulate some really legendary gear in your home studio. No matter what your choice of audio interface, it's sure to come with a host of tools to help your workflow. Be sure to do your research to get the most out of your choice.

Sharon Kathleen Johnson
Thanks for the information on the latest developments--pretty soon we'll have an interface that writes and edits the music!
lostinthesound
Mattâ€”where on Earth did you find a RME Fireface 802 for $800 USD?

Mesamkiv
Yes please tell us where an RME 802 can be found for so cheap.
Matt Vanacoro
I didn't, I'm assuming that should have been in GBP - probably a bit of a mix-up in the English to British translation - we'll fix it! I don't think there's an announced price yet! (although I'm anxious to see what it will cost!!)