Although we didn't personally get a chance to meet Dr. Zuo and try out the new Tone Shifter 3 at NAMM, we've been intrigued enough to take another look (from afar) of this "smart sound interface / MIDI controller". Here's what Tone Shifter tell us about their new sound interface in their own words... it's on Kickstarter, so you can take advantage of early-bird offers still.

By simply connected to iDevice, MAC or Windows PC, you can use all the top-level guitar effects software. As this smart sound interface has combined MIDI controller, guitarists can switch tones using the foot switches with zero latency.  In addition, it is very compact and portable, the guitarist can easily put it in a guitar bag.

As millions of guitarists are using mobile music apps, all of them want one sound interface which can be used both in practicing and on the stage, suitable for all the iDevice (iPhone, iPad, Mac) as well as MAC and Windows PC. As a ten-year electronic engineer and guitarist, Dr. Zuo couldn’t find this product on the market. So he decided to make one. 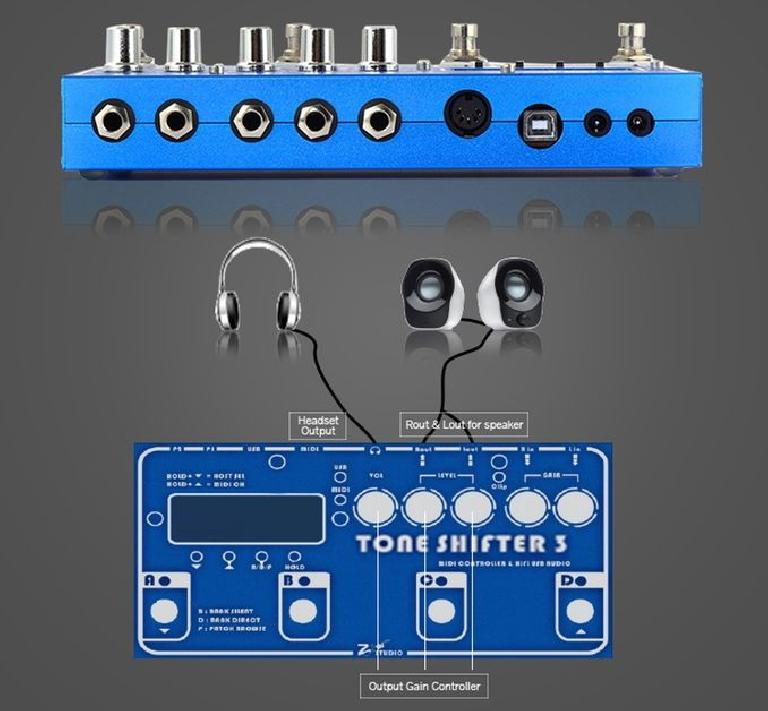 Tone Shifter 3 has 2-IN/4-OUT: independent L&R inputs, independent L&R outputs and Hi-Fi headset output. Also it has independent input gain and output level control. For the MIDI control, Tone Shifter 3 is designed with three useful switching modes (B/D/P mode). By using D mode, after long press A or D foot switch to select the previous or next BANK, the tone pitch will immediately jump to the destination BANK. In B mode, the tone pitch will not change when you are selecting the BANKs. The tone switching only happens after selecting A /B /C /D in the destination BANK by foot switches again. In P mode, only the A and D foot switch is valid for changing the tone pitch by +1 or -1 which is very convenient to browse the whole sound library when you practice.

What’s more, Tone Shifter 3 can be used as a standalone MIDI controller for most gear with the MIDI IN input. Even the AXE FX2 and Kemper Profiling Amps can be perfectly controlled by Tone Shifter 3.

Tone Shifter 3 smart sound interface can be device powered. In additional, the special designed power inputs Jack PW1/PW2 can be plugged by almost adapter from 7V to 18V regardless of AC or DC, +/-poles. That is also a firm guarantee of the reliability. You can’t damage Tone Shifter 3 with an unselected power supply.

Tone Shifter 3 Smart Sound Interface has launched firstly in Kickstarter.com right now and then will be sold all over the world. Street price is $249/$220 for different accessories in package. If you have interested about this device, you can pre-ordered it through Kickstarter.com and enjoy the early bird special.

Note: There's 26 days to go at time of writing and Tone Shifter 3 is already over 60% funded.