Language
Recording guitar (or any instrument) in your home studio is great. There's less pressure than a conventional studio. But you may learn some nifty tricks in the later, as Rich Tozzoli explains.

Many of you—myself included—like to record guitars at your home studio. It's comfortable, there's no clock ticking, the pressure is off and of course you can do as many takes as you want. But recently, I cut a few days of guitar tracks up at Clubhouse Studios in Rhinebeck, NY. It was such a great experience that I wanted to share some of the insights I had upon my return home.

When recording at home, chances are you are the one recording yourself. That means you set up your amps or plug-ins, get the session ready, make sure the levels are good, and that everything is as it should be. When recording in a studio, the engineer takes care of all of that. Your job, as it should be, is to focus on getting the part down correctly. By letting the engineer get everything ready, you can think of nothing except creating great tracks. 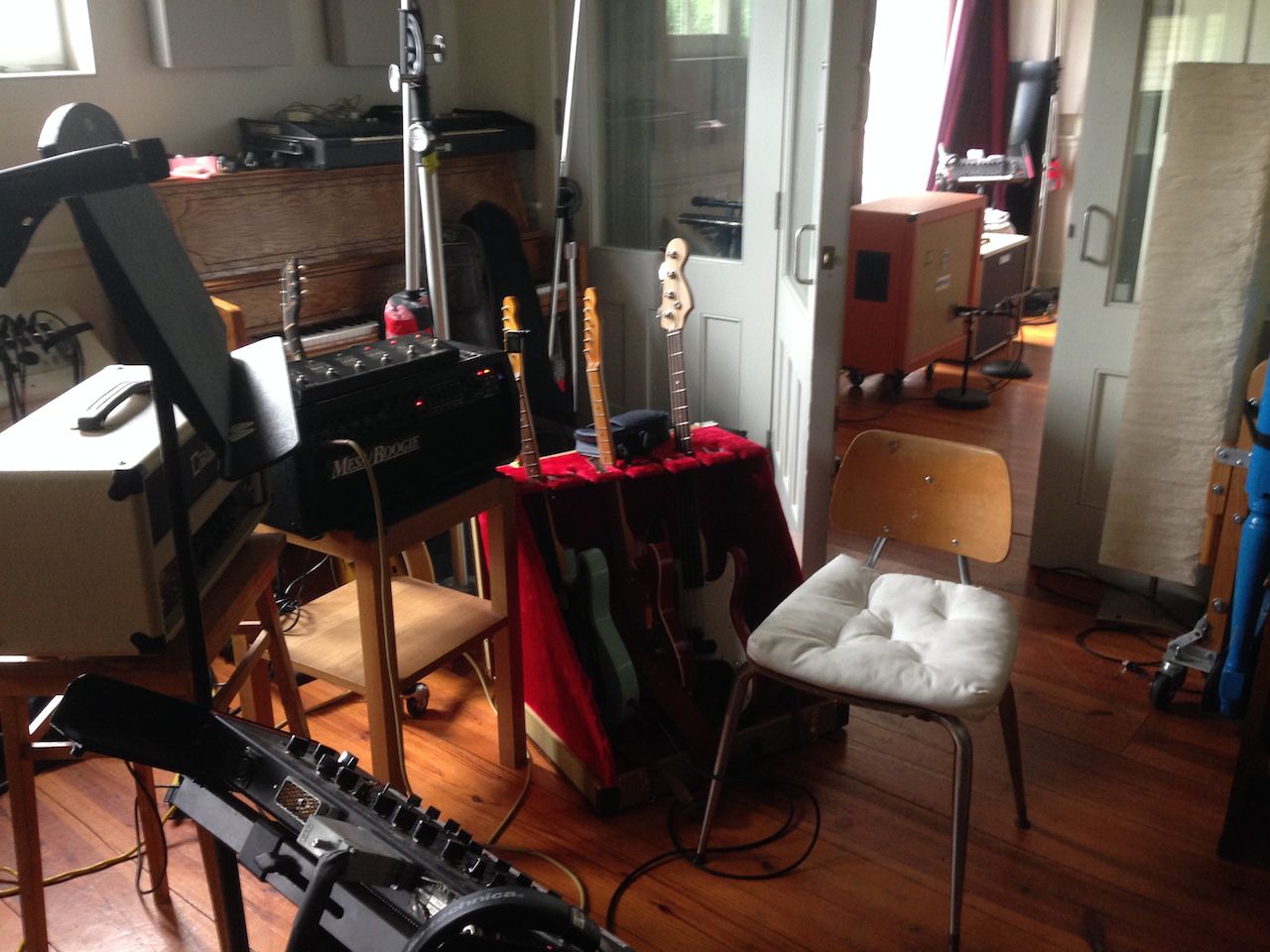 Recording at home has obvious advantages...

When working at a studio, they generally have a full function headphone system. That means you have the ability to turn up or down any instrument on the headphone mixer. It makes things much easier to hear. When working at home, unless you create a headphone submix, you're monitoring the stereo mix. So you have to record over whatever mix you currently have happening. By having a full headphone cue system, you're in control. If you want to hear more bass and drums, flick up the faders. If you want less of yourself, it's no problem. It's quite liberating and useful for efficient tracking.

Sure, you may have a few good mics in your collection. But by going to a good studio, they probably have many more. At the Clubhouse, I mentioned that I wanted to have a Sennheiser 421 and a Shure Beta 57 on my cabinet, as well as a good ribbon mic. That's all it took. Next thing I noted was my amps had those mics set up and ready to go. On the drums, we had them miked up with an arsenal of DPA, Earthworks, Beyer, Neumann, Sennheiser, AKG and other mics. Great mics and a great room do make a difference!

Taking the mics a step further, the studio had a bevy of top-flight preamps. We ran some through the Neve 8068 consoles preamps, but also used Grace, Chandler and custom Lomo preamps. We added a touch of LA2A style compression to the ribbon mic for effect and used both software and hardware reverbs. By going outside of your home studio, chances are the choice of preamps and outboard gear are much more extensive. 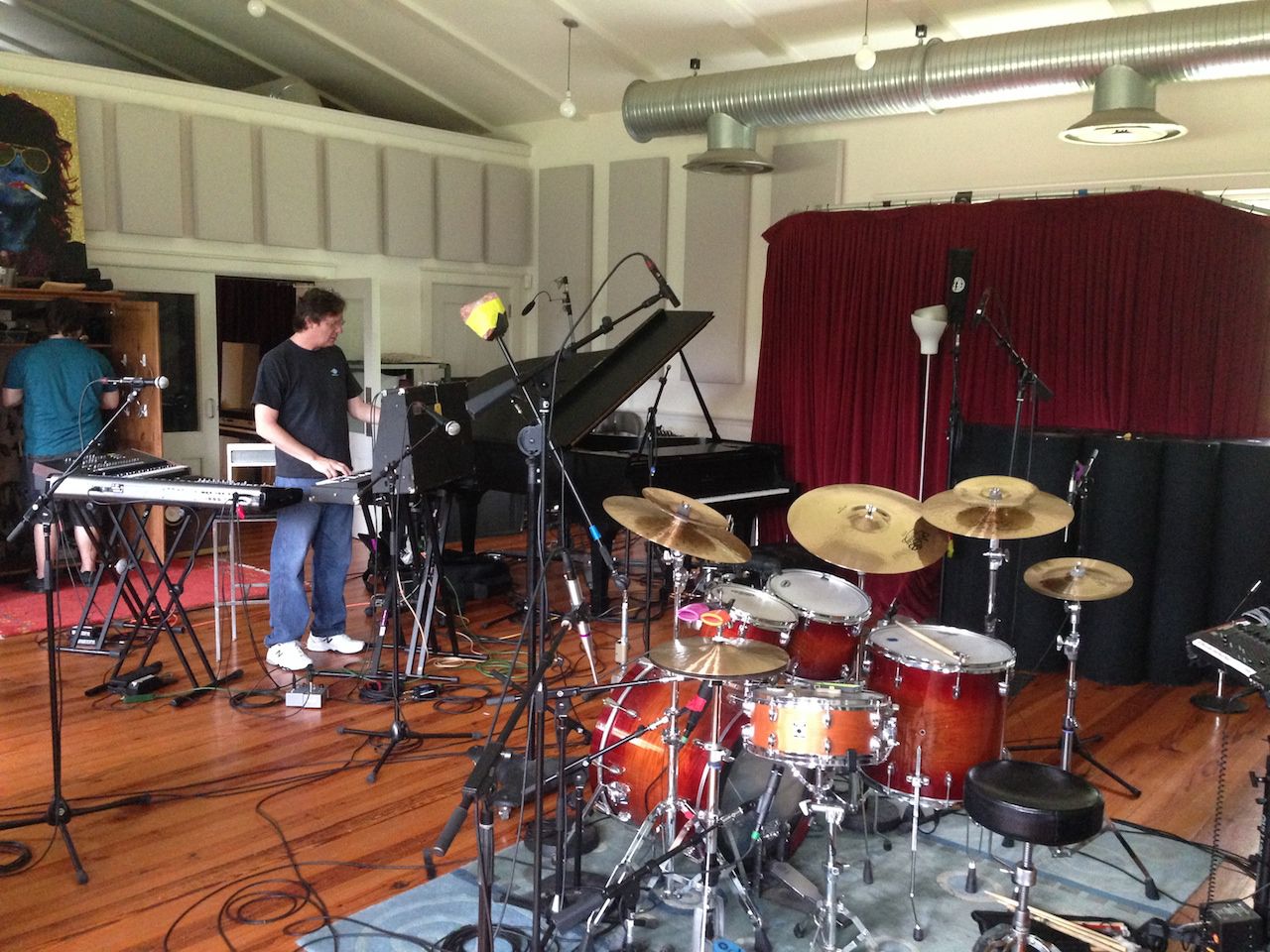 But recording in an outside studio will let you focus on what's really important... playing the best guitar parts for the song!

This is a small but important detail. Many of the amps I have, such as the old Gibson and even my Mesa Boogie MK IV, need to be turned up to get that 'sound'. By going to a real studio, you can let them rip—without upsetting any neighbors.

Having said that, by getting your amps dialed in, you become inspired by the sound and create cooler parts. Some of the parts I came up with on this past session were directly related to being able to turn the amps up loud. Also, when they get turned up, the engineer is right on top of things to get the proper levels, without you having to worry about it.

The Clubhouse has numerous isolation booths that are just off the main room. My amps sat in one, protected by two large doors. Therefore, I could stand in the live room with the drummer for better eye contact, but have my amps fully isolated. Sometimes, during overdubs, I opened the doors up to not only feel the sound of the amp, but to get a touch of harmonic feedback and sustain—especially with the Mesa Boogie through a 4x12 cabinet. As much as I like plug-ins, there is no sound quite like a roaring 4x12!

As mentioned above, a great engineer will take care of everything for you. At the Clubhouse, we had not only Grammy nominated owner Paul Antonell cutting tracks, but also Mike Dwyer and Connor Milton on it. The reason I mention this is that they all know the room, setup and headphone system incredibly well. Not to mention their competence on Pro Tools, which certainly helps the flow of a session. A good engineer is invaluable, making sure everything outside of creating the music is being taken care of.

Being away with your band, or whomever you are making music with, has its own benefits. It's great to have a sense of purpose as a team to get the job done and have fun. It's about going out to eat together and socializing after the session. It's talking about gear, amps, guitars and software. It's a bonding that has musical value. Sometimes, you need to get out of the comfortable home studio environment, break things up, and use the opportunity to create something new.

Undistracted focus is something that is sorely missing in today's modern era of production. By taking the hands off approach by letting someone else get everything ready; you can make sure to stay on target.

One of the great things I noted about recording in outside studio was the ability to think of nothing but the music. The focus was not on setting up mics, making sure the headphones were working, getting levels and organizing the session data. It was on getting a big guitar tone. It was on creating cool parts and arrangements. It was on making sure I was putting down the best guitar tracks that I possibly could. I was focused on nothing but that, and the end results spoke for themselves.