Language
Every now and then a DIY synth project comes along that just bowls us over. The Guenther Chiptune is one such homemade synthesizer.

Dave Guenther has created a semi-modular anlog synth as a real labour of love. It took him the best part of one year to make this Arduino controlled MIDI capable synthesizer and it really does look lovely and sound great.

The Guenther Chiptune wasn't made from kits, but 100% on protoboards with passion and love mixed in. 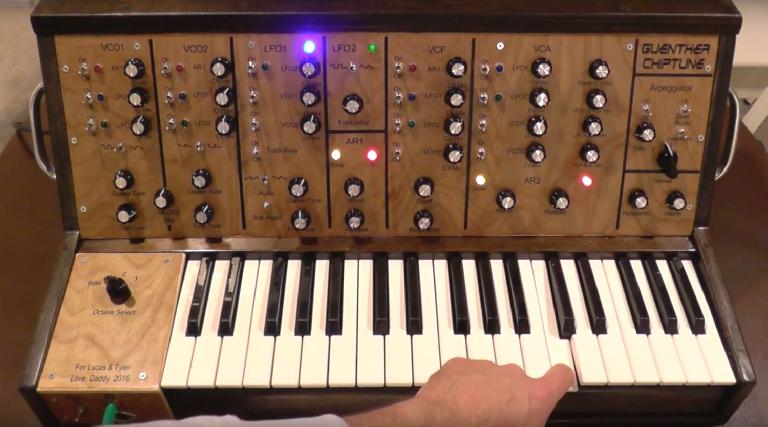 Here's the full details from Guenther himself. Hope you find this as inspiring as we do!

I'm pleased to post about a project I just finished and worked on over the last year. It's a monophonic, MIDI capable, Arduino controlled semi-modular analog synth -- 100% build on protoboards! The VCOs, VCA and VCF are all built around LM13700 OTA datasheet circuits tailored down to +-9V. The Expo converter seems to be a pretty standard design that I've seen in several places (Thomas Henry, Aaron Lanterman lectures, Hal Chamberlain). The envelopes were based on a pretty simple op-amp/diode RC circuit. The keyboard was extracted from an old broken casio. I "un-matrixed" the keyboard input and fed each key through a set of parallel-serial input shift registers. This approach allowed me to use three pins on the Arduino to capture the entire set of keys as well as the Arppegiator controls and octave selectors. It also registers each key independently so you have have any number of keys pressed at once - though the arppegiator only registers up to the lowest four keys pressed. I built the project as a Christmas present for my two boys.

Here is a youtube video with a demo of the synth to include music and some pictures of the build. Jump in at 2:30 to see Guenther explaining and demonstrating the synth itself.

This wasn't built from any kits, and I got a LOT of help from people in this group (Synth DIY) over the last year, whether it was pointing out learning resources/tools to go at it myself, circuit debug help, or simply encouragement/positive/helpful responses to questions.

This synth is most probably not for sale. Want one? Contact David... but be prepared to make one yourself ;)

Learn all about synths and synthesis in the AskAudio Academy.