As implied by name, the Modulation Processor 3244 plug-in provides three LFOs (Low Frequency Oscillators), two slope generators, and four envelope generators, all of which can be synchronised to the host application with the creative convenience that modern-day music-makers have come to expect from plug-ins. Only Modulation Processor 3244 is quite unlike any other plug-in in existence, starting out as a novel way of fulfilling a very specific need. “Needing to get a filter to modulate synchronised via SysEx from a host application was the basic idea behind its development,” divulges company founder Julian McDole.

So what, exactly, makes Modulation Processor 3244 stand out from the sound of the (plug-in) crowd, to (partially) paraphrase the early-Eighties British breakthrough hit from synth-pop pioneers The Human League — no strangers themselves to the musical delights of analogue synthesizers, albeit vintage classics clearly lacking an ability to synchronise modulation movements to a host application? Any analogue synthesizer — classic or otherwise — can now do just that, thanks to Modulation Processor 3244! The timing of this trailblazing product could not be better with analogue synthesizers proving popular as ever — more popular, perhaps, than ever even, thanks to the ever- expanding Eurorack universe of small-format modular system modules as well as numerous keyboards and desktop instruments on offer from current companies, both bigger and smaller. 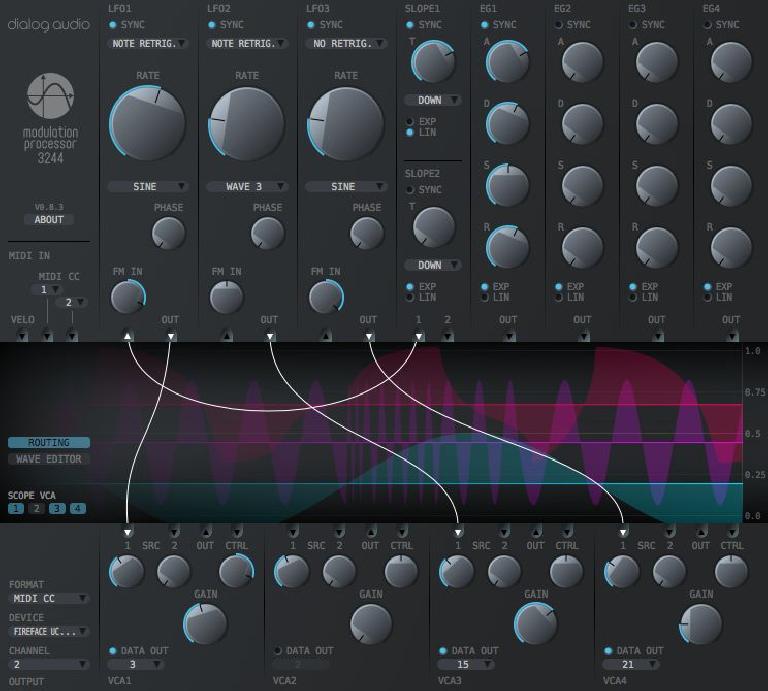 Ultimately, owners of software-only setups need not feel left out of the picture for Modulation Processor 3244 can also be pressed into service to modulate soft synths and audio plug-ins within the host DAW to provide extended modulation possibilities. Put it this way: whatever shape or form your preference for modulation may take, fortunately for everyone this trailblazing plug-in’s GUI (Graphical User Interface) is as easy on the eye as it is easy to use... make modulation, not frustration!