These Tips Will Help You Learn A Studio Mixing Console

Learning the ins and outs of an unfamiliar studio mixing console can be daunting. Here are some tips on what to watch out for and how to make the process as painless as possible.

Transitioning in to a new studio can always be a little tricky. This is especially true when you, like me, are having to learn a new, very large mixing console. All of those knobs and faders can cause even the most experienced of engineers to have a slight moment of anxiety when moving boards. And, while there are some amazing courses on studio consoles that I highly recommend.

Recently, my charge in life became learning a studio mixing console in the form of a Euphonix CS2000. Initially, I was not excited about this, as much as I was about everything else in the studio. But because I am to become second engineer at this studio, there’s no way around it! After a few minutes with just one channel on it, I quickly began to figure out why the lead engineer is so in love with it. The onboard compressors allowed the quickest VO dial-in ever, the EQs sound amazing, tons of inputs and everything can be assigned and reassigned in many amazing ways. But with a board this big, where the hell do you even begin?

The first thing I had to do was learn how to talk to the board. This comes in the form of understanding how to load up snapshots of old mixes, and existing templates designed by other engineers in the studio with the rooms it manages, all the inputs and outputs going to those rooms, effects settings, EQ settings, and channel assignments. After some time with the manual, my head was really starting to hurt. And simply getting through the menus proved a little bit of a challenge at first, as the console has seen more than a couple of engineers and many of the buttons had lost their printed labels as they existed upon the plastic buttons. 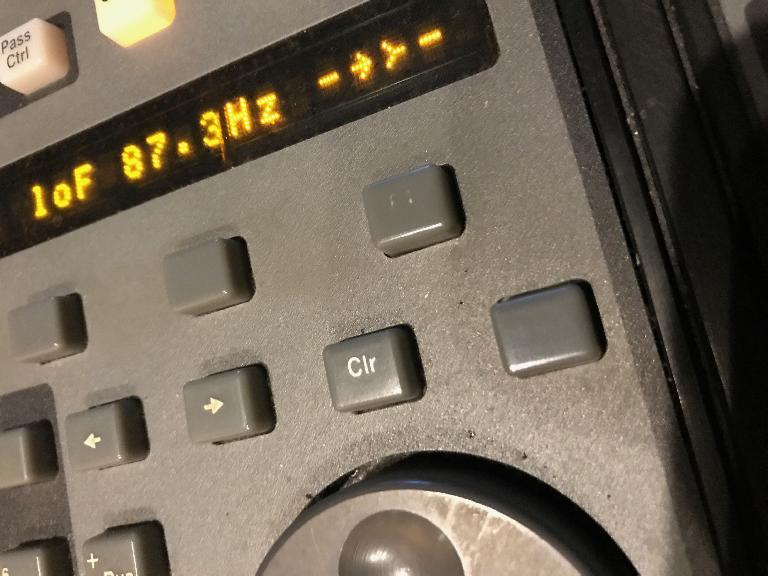 Thankfully, the labels at the bottom of the board were populated upon a quick flip over, and the cheat sheet reveals all the major buttons. Any studio that’s been around for a while will always have some labels… somewhere. If they don’t, they probably haven’t been around for that long, and won’t be much longer! 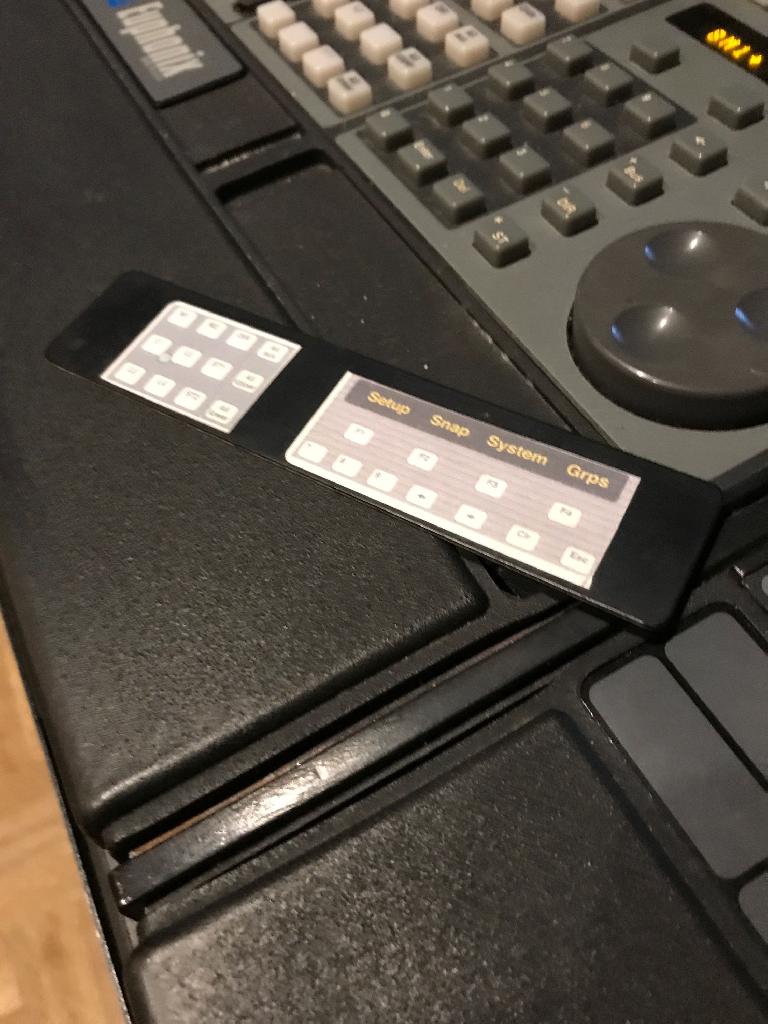 Once I knew where the Enter button was, I was able to get friendly with the scroll wheel and begin jumping in to things. Like most boards created in the mid-90s there is a computer screen and also a secondary menu screen that exists separately from the internal monitor, positioned near the scroll wheel. This menu also revealed familiar settings that began to open mental doorways in my memory, as it is very similar the general setup of a synthesizer, something I know very well!

Tip: There’s always a main interface on a console. Once you know where it is, it’s easy to explore the menus, options, features and parameters and get a greater understanding of the board.

As you can see in the picture above, there’s not an EQ strip on the CS2000. However EQs do exist per channel and they are amazing… you just have to access them from the main screen. That’s where all the control occurs on this board. And on many other boards from this era: Yamaha 02R, anyone? By using the small attention buttons located in many different sections of the main control strip, you can focus on the channel you’re currently assigned to, and then modify EQ, compressor settings, create new assignments and many more additional features found within the internal computer of the console. 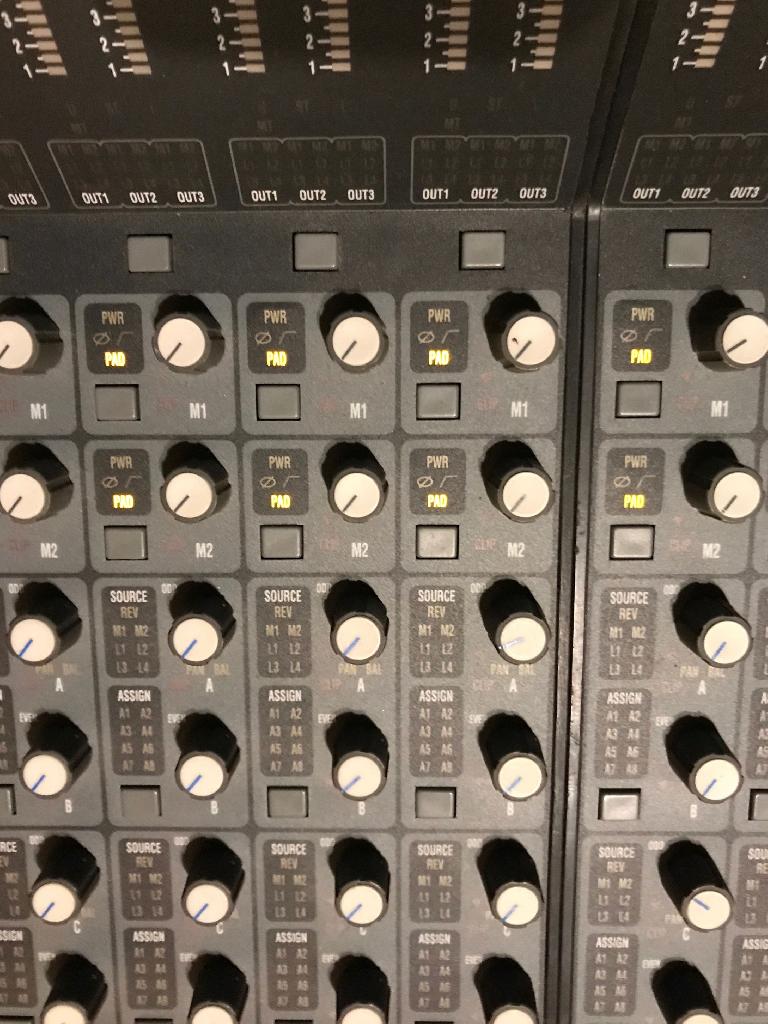 Now, once located, adjusting the EQs and compressors also requires a little getting used to. Because the familiar EQ pots are not on the channel strips, like on an analog board, I find I have to dial in the frequency bands through the pots available in the middle of the console. Again, right underneath the CS-2000s monitor! On this board, everything always comes back to that monitor. It’s where everything happens on this board! 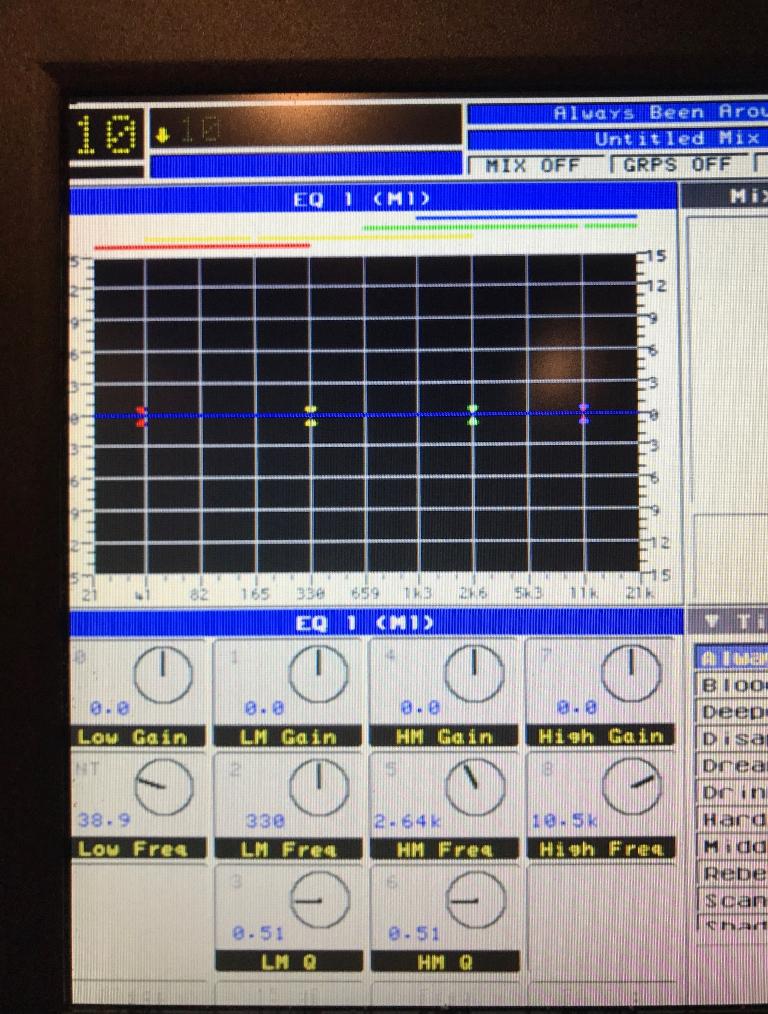 Tip: On digital boards, control surfaces for specific functions may reside in other sections of the board. But, do not doubt their efficacy! They are still studio grade effects.

One day, during my adventures in Euphonix consoles, I had a serious situation. Suddenly, my monitoring channel, usually quite active on the VO template went dead. After reloading the snapshot four or five times, and asking questions from the studio manager, while the lead engineer was away, I uncovered a kink in my signal chain - the Patch Bay! By simply disconnecting two direct connections from Pro Tools back in to the board on the channel I needed, signal was restored and so was my sanity. I also learned how I could patch in my own sends from Pro Tools during this little exercise in frustration, and even apply outboard FX from the studio’s most elaborate rack of outboard gear! 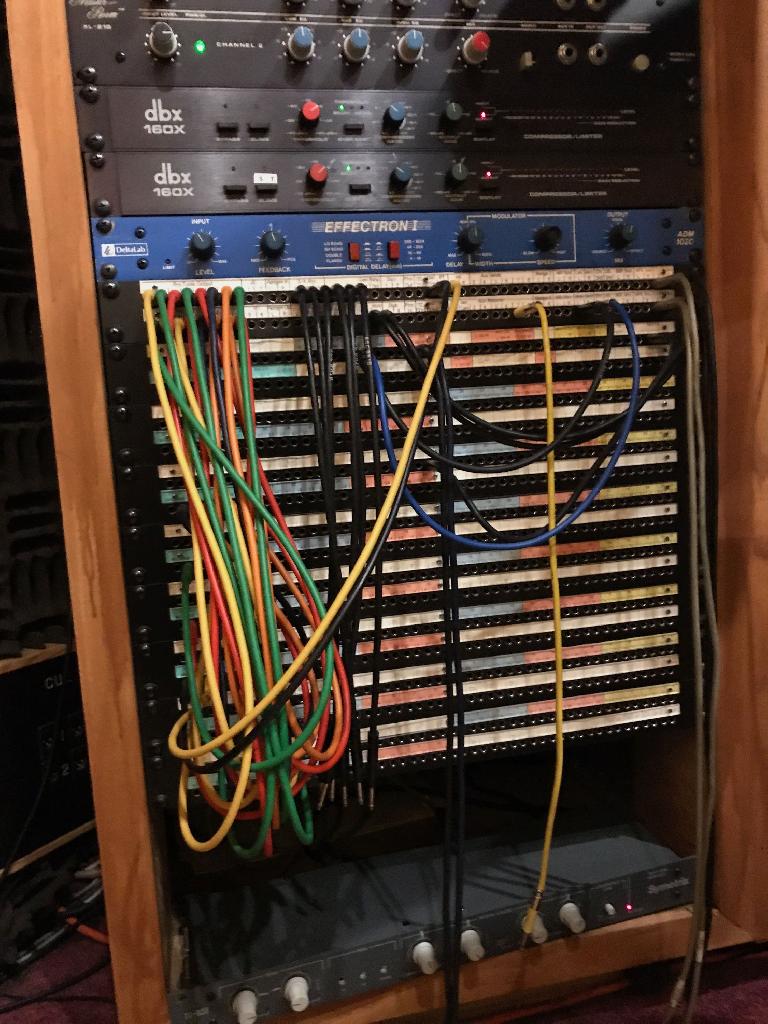 Tip: Familiarize yourself with patch bays in any recording studio as soon as possible. This journey will never fail to reward you in ways that you can use and abuse all equipment within eyesight.

4. Find all the External Inputs

In any recording studio, regardless of the console, or any equipment therein, you need to know how microphones and all other direct connections going in to the other rooms occur. I generally like to draw this out on my own, as a schematic, at some point to reference at home, and on my breaks. By understanding the connections coming in from the other rooms in my new studio home, I’m able to plan out where different band members will be placed. 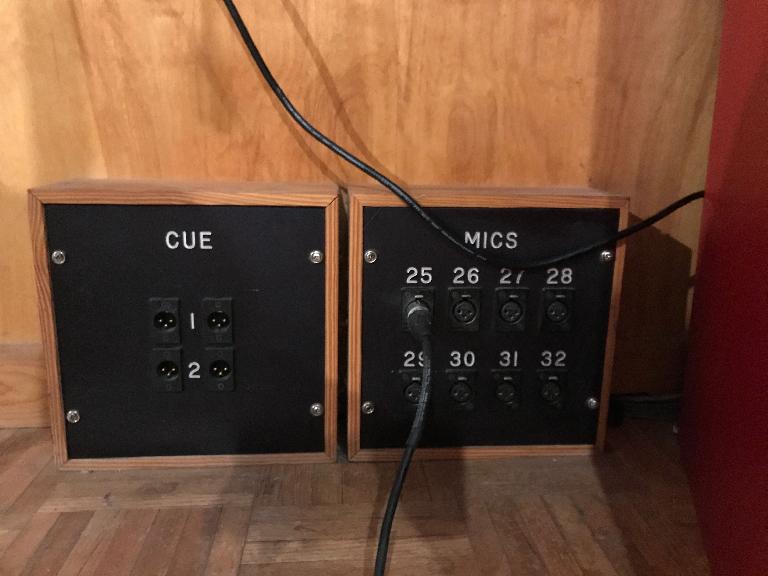 Tip: Take your time getting to know the physical layout of a recording studio. This is especially true of older recording studios that have been operating for a while. You never know where another hidden box of connections is, hiding within a wall panel or behind an amp. Also, locate panels of connections marked CUE for setting up talkback and monitoring.

5. How do you Talkback and Monitor?

Finally, I had to learn how to not only communicate with clients and talent in the other rooms through the CUE boxes but how to hear them. Like all consoles, the CS-2000 has a talkback channel, 8 busses and a more than a couple of speaker outputs. Finally getting to jam my music through the gargantuan Urei monitors by locating the Monitor C Channel was a moment of sheer pride, when I figured out how to finally switch to different monitors. 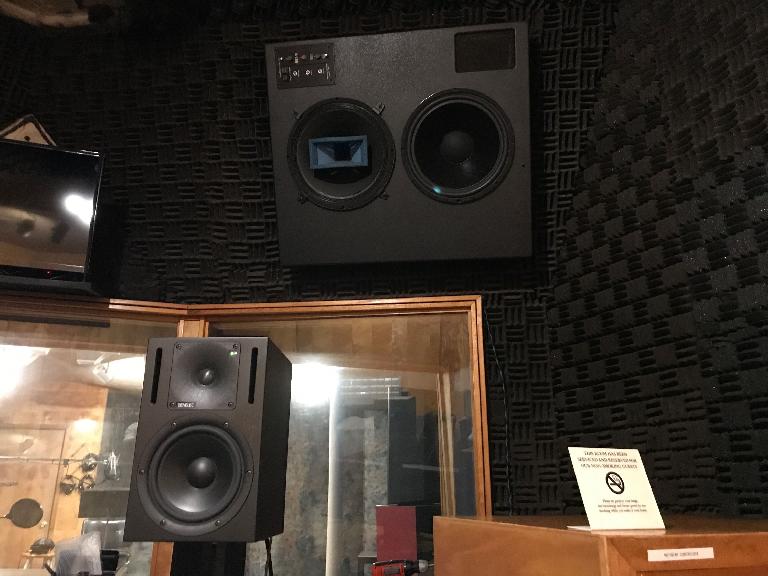 Being able to switch to the ‘client speakers’ is important, because that’s how things sound big! Though, Monitor C stays my main set, I can tell you that. That’s where the Genelec 1030s are. My main monitors since my Lucas days. I own them at home, and I use them here, too. Thankfully, the monitor channels on the CS-2000 are right by the talkback button, a very important feature, of course, for running a session. 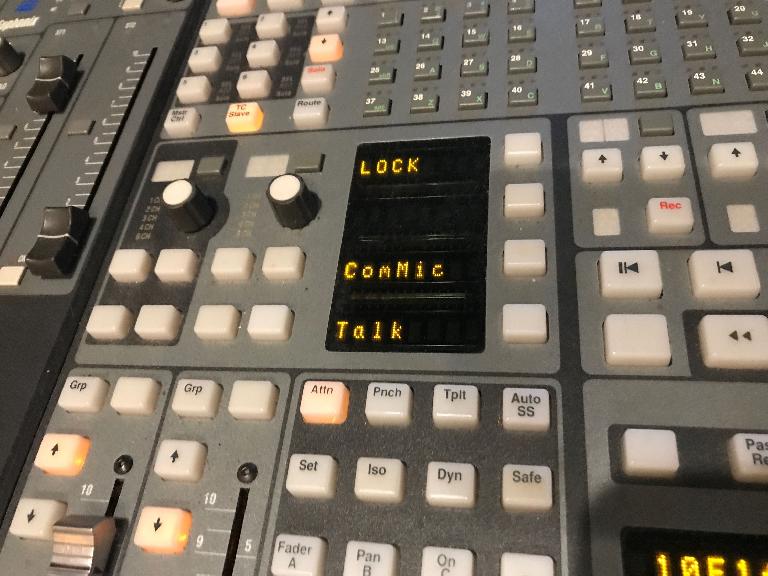 Tip: Knowing how to talk back to your talent and switch between speakers are central to both producers and engineers. Usually, in well-established studios, there’s a second, floating hardware button around for talkback, if you get an annoying external producer trying to put his hands all over your session.

I’m still no expert on the Euphonix CS-2000. But I know how to get around now. Thanks to locating all of the above, with experience from many times in many different recording studios and some helpful courses. And, as you get more familiar with more consoles, rooms, and setups, you’ll find you grow some confidence of your own. Hopefully, the tips above can greatly help out with that! My next step is going through the included tutorial in the console's manual and learning about all the internal routing and how to make channel assignments! Wish me luck!

Learn more about mixing techniques in the AskAudio Academy here.