The World of Alternative MIDI Controllers

Language
From Keytars, to MIDI guitars, wind controlled to V-Drums, there's a world of unusual MIDI controllers out there, that go beyond your usual buttons and keys. Joe Albano explores notable alternatives.

The majority of people who use synth and sampled sounds in production probably play the parts from either traditional keyboards, large or small, or drum-machine-style finger pads (nowadays many keyboards include these as well). But there’s a whole world out there of alternative MIDI controllers, and many of them can provide an opportunity for much more expressive playing than mechanical keys or simple finger pads. If you haven’t really explored the world of alternative controllers, this article will be a brief survey of just a very few examples of what’s out there. 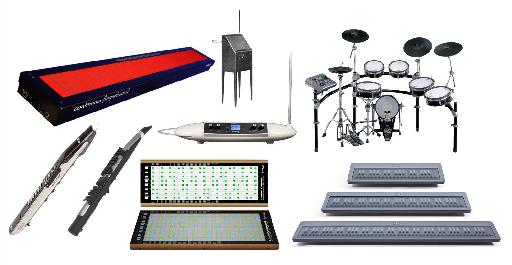 A variety of alternative MIDI controllers.

The traditional vs. the new

It seems to me that you could divide alternative controllers into two different categories—those that mimic familiar acoustic instruments, and those that offer a new, and often radically different, interface to the performer. The goal of both is usually to provide additional expression capabilities, beyond what keys and finger pads have to offer, but they can take very different paths.

Traditional alternative controllers try to offer players whose main instrument is not the keyboard a more familiar way to create performance data—one that not only lets them take advantage of the particular skills they’ve developed playing their instrument of choice, but that also offers the kind of expressive performance gestures that may be specific to certain instruments, and not possible (or not easy to fake) on keyboard. Here you’ll find full-sized MIDI drum kits, MIDI wind instruments, and even MIDI guitars.

Certainly there’s no shortage of MIDI drum kits for drummers—offerings from Yamaha, Alesis, and Roland are probably the most well known, though there are numerous others. These all consist of full-size pads for the drums, and plastic or rubber cymbals, including pedal-operated hihat and kick drum, allowing drummers to transfer (almost) all of their hard-earned technique to digital drum instruments (either the sounds included with the kit, or one’s favorite drum software). Possibly the most sophisticated of these kits is Roland’s V-Drums. 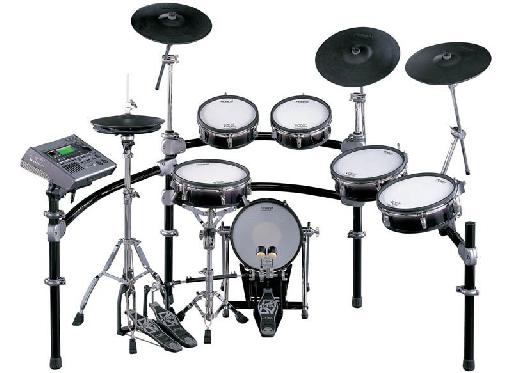 Roland pioneered the use of special mesh drumheads, whose feel and response is (arguably) closest to the real thing. Their pads and electronic cymbals allow for a lot of technique that you can’t really do easily from keys or finger pads, like rimshots, hi-hat foot splashes, cymbal chokes, and even (limited) brush play. Of course, you need to have real drumming chops to take full advantage of all this, and the high-end kits are quite pricey, but they’re still the best way to get live-played digital drum parts with (almost all) the musical feel and nuance of acoustic recordings.

Another type of traditional alternative controller is the MIDI wind instrument. There are a few out there—the most well known and well used are the EWI (Electronic Wind Instrument) from Akai, and the WX-series, from Yamaha. 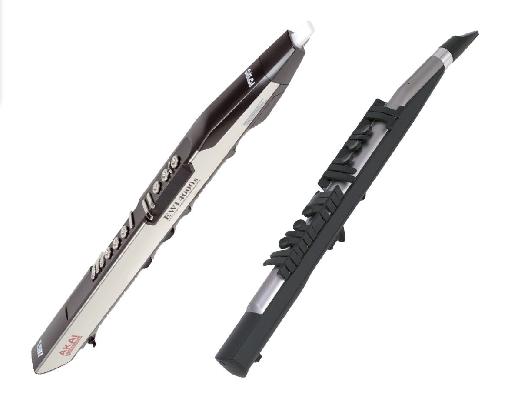 Both resemble a soprano sax or clarinet, and offer familiar fingerings (sax and other wind instruments). The Yamaha uses a plastic reed mouthpiece that mimics a sax’s, while the EWI has a rubber mouthpiece, but both let the player perform pitch bends and vibrato manually, as they’re accustomed to, by varying (bite) pressure on the mouthpiece—this alone can make a huge difference in imparting natural musical phrasing to sampled (or synthesized) wind and brass sounds, as well as other instruments that are played legato. Couple it with the use of breath pressure to control volume and tone, allowing for real-time swells and dynamics, and many brass patches that may sound more like an organ when played from the keyboard really come to life, once they’ve been programmed to respond appropriately to the various MIDI Control Change data coming out of these controllers.

MIDI guitars have been around for a long time, though they’re probably not as popular or widely used as the other two controllers I just described. That’s not because guitarists don’t want to play digital sounds expressively from a familiar instrument, but because the technology is a little more finicky, though at present it’s light-years better than when first introduced. Hex pickups and converters generate MIDI notes and bends independently for each string, allowing the guitarist to use all the familiar playing techniques he’s accustomed to, but requiring that sounds be set up as 6-channel multitimbral instruments, to take full advantage. But when it’s all working, the MIDI guitarist can bring the kind of singing, fluid playing style that the fretboard offers to any instrument he desires.

There are other alternate controllers that mimic real instruments—percussion controllers, MIDI mallets, even MIDI bass. But I’m going to move on to my other category—non-traditional MIDI controllers.

Non-traditional alternative MIDI controllers aren’t looking to replicate the expressive capabilities of familiar instruments—instead they offer expressive possibilities from what are often entirely new and unfamiliar playing techniques, that have the potential to pull the player into a new and different way of approaching musical sound and performance. Rather than letting the performer transfer his/her existing playing technique to the digital world, these instruments usually require the player to develop a whole new technique, sometimes with entirely unfamiliar performance gestures, to take the best advantage of what they bring to the table. There are quite a few of them, big and small, though many are really add-ons for existing controllers. I’m going to mention just a few that are playable stand-alone controllers in their own right—each of which offers their own take on expressive playability.

A blast from the past—the Theremin(i)

No article on alternative instruments would be complete without a nod to the Theremin. Invented by Leon Theremin back in the '20s, this unique instrument is played by waving the hands in the air between two antennas—one hand controls pitch, the other volume (search “Theremin” on YouTube—or just rent any 1950’s b&w sci-fi movie). It’s a bear to play, but Theremin virtuosos can make it really sing. Naturally, it predated MIDI—by half a century!—but Bob Moog was an early manufacturer, and Moog Music still makes them. One model, the Theremini, has even been adapted to be a MIDI controller. There are other MIDI instruments these days that are played by waving the hands in the air, courtesy of infrared sensors and other cool toys, but none have the high profile or the pedigree of this classic. 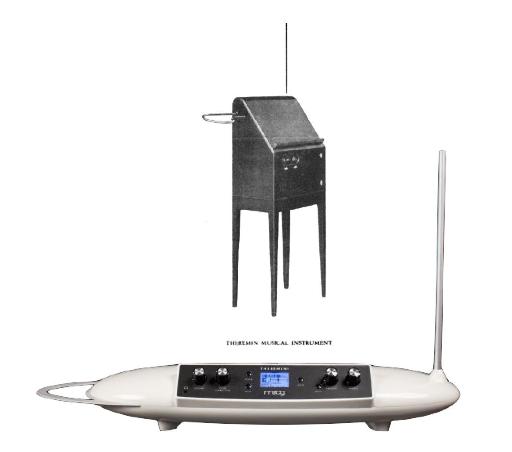 An original Theremin (top), and the MIDI-equipped Theremini.

A sea-change from a Seaboard

Some current alternative controllers don’t stray too far from traditional layouts, but add significant expression options that require merging new performance techniques with more familiar ones. One such instrument is the ROLI Seaboard Grand.

At first glance, this looks like a traditional keyboard, though with a soft, squishy-looking surface, molded in the shape of keys. In fact, you do play on these (non-mechanical) “keys” as you would on a regular keyboard, but additional expression is designed into the surface. You can slide the fingers up & down and left & right on the “keys”, and apply pressure, which can modulate pitch, volume and other parameters. The three-dimensional response of the surface is the heart of the expression capabilities of the instrument—sort of “aftertouch on steroids”. The board can be set up to be capable of polyphonic gestural control—individual expressive gestures can be made for multiple keys simultaneously. Now, ROLI may not be the first company to implement multi-touch gestural capability or polyphonic aftertouch, but the design seems quite elegant, and the Seaboard Grand looks promising.

A step away from the ROLI is the Haken Continuum. 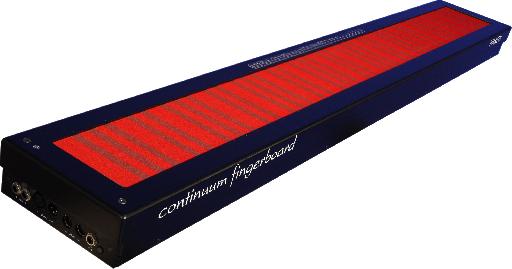 At first glance this looks like it could be another keyboard-based design, with a flat surface instead of raised keys, but the intervals are not the familiar black & white arrangement, but a series of evenly-spaced bars that can be calibrated to whatever tuning you want. Without the diatonic hierarchy of the traditional piano arrangement, the Continuum can be more easily adapted to playing styles of various instruments, or unique new ones. Like the Roli, the surface features both Velocity and three-way gestural response for the “keys”—you can slide up & down, side to side, and apply pressure. Each finger can not only do this independently, but they can transmit on different MIDI channels. Of course, playing the Continuum will require a fair bit of practice to get used to the surface’s response and the unfamiliar gestural vocabulary, but it seems like it’d be well worth it for anyone who’s in the market for something with that kind of expressive potential.

Quite a few alternative controllers are configured as square-ish tablets with arrays of buttons or checkerboard surfaces—devices in this growing category may be referred to as Grid Performance instruments. These range from the Yamaha Tenori-On to several controllers specifically designed to interface with Ableton Live’s unique arrangement capabilities (Ableton Push, Novation Launchpad). This type of controller is really a hybrid—a playable surface that can trigger both notes and sequences, combining melodic or manual rhythm performance with real-time control of rhythmic sequences and loops.

I just about have space for one more, so let me mention the new LinnStrument controller, from Roger Linn. 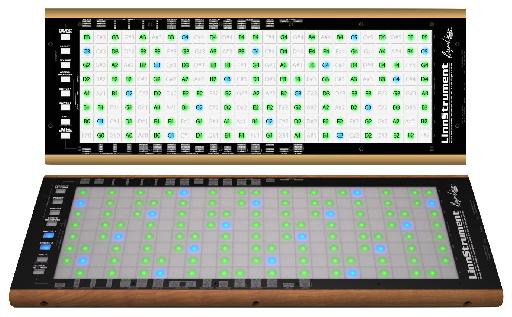 This combines features from the previous instruments. It’s a grid—8 x 25—Linn envisions this as a guitar-like surface, with 8 “strings”, which makes for the same experience playing in any key, unlike the piano, and provides a better way to generate performances that would be typical of instruments that don’t share the piano’s diatonic layout. The grid squares respond to Velocity, and within each square, you can once again apply three-way gestural control—X, Y, and Z-axis—up/down, left/right, and pressure. Different MIDI controller data is generated for each, including polyphonic aftertouch, and for extreme flexibility, you can set it to transmit different notes on different MIDI channels, for additional possibilities. Many of these features are also found on one or the other of the various keyboards I discussed above, but the LinnStrument is conveniently small, and more affordable than many others—couple that with Roger Linn’s reputation for innovation, and it could prove to be a winner.

And now I really am out of space, so I’ll quickly wrap up.. While traditional altenative controllers have a specific market, many keyboard players might initially be resistant to non-traditional controllers with unfamiliar layouts, that will require them to master new skills, but there are many situations where playing a part on a traditional keyboard just doesn’t cut it, and a fresh approach might very well open up new and welcome creative possibilities. The best of these controllers are, at the very least, worth a good look with an open mind.

Learn more about MIDI than you knew existed  in this educational/comedic video course by Peter Schwartz.