Joe Albano reveals how dynamics plug-ins like compressors and limiters can be utilised in ways you might not expect.

When it comes to Dynamics processing, everyone first thinks of the classic applications of compression—basic control of excessive level swings in a track, and creative applications like pumping up drums. And of course brickwall limiting is still used to crank up the overall level of masters—for better or worse.

But compression is utilized for other tasks as well, and the other side of the Dynamics coin—expansion/gating—provides equally important, if less glamorous, capabilities in recording and mixing. These tools—the less-famous compression-based processors and expander/gates—are the unsung heroes of music production. They offer both technical and creative processing capabilities that may not get as much attention as that famous drum compressor or mastering limiter, but nonetheless make critical contributions throughout music production.

Among the most common uses of compression are keeping a track—like a vocal—in good balance with the backing track, and shaping the envelopes of drums for that now-classic fat, aggressive drum sound. But there are other compression tricks that are employed regularly with less fanfare, that most engineers couldn’t live without.

Often a vocalist may generate a bright, harsh sound whenever the letter “S” comes along. A De-esser is a specialized type of compressor that’s designed to clamp down on just excessively edgy S’s while leaving the rest of the audio alone. Any compressor can be pressed into service as a De-esser as long as it has an appropriate sidechain input. Within a compressor, a split-off sidechain (copy of the main) signal is sent to the threshold detection circuit, which then controls the gain reduction circuit that acts on the main audio signal path. Some compressors include optional EQ inserted only in that sidechain signal path—this EQ is never heard on the main signal, but it can be used to narrowly boost the range of frequencies (around 6-7kHz) where S’s live. With the S’s cranked, the compressor can more easily distinguish them from the rest of the audio, and effectively clamp down on them, eliminating any undesirable harshness. 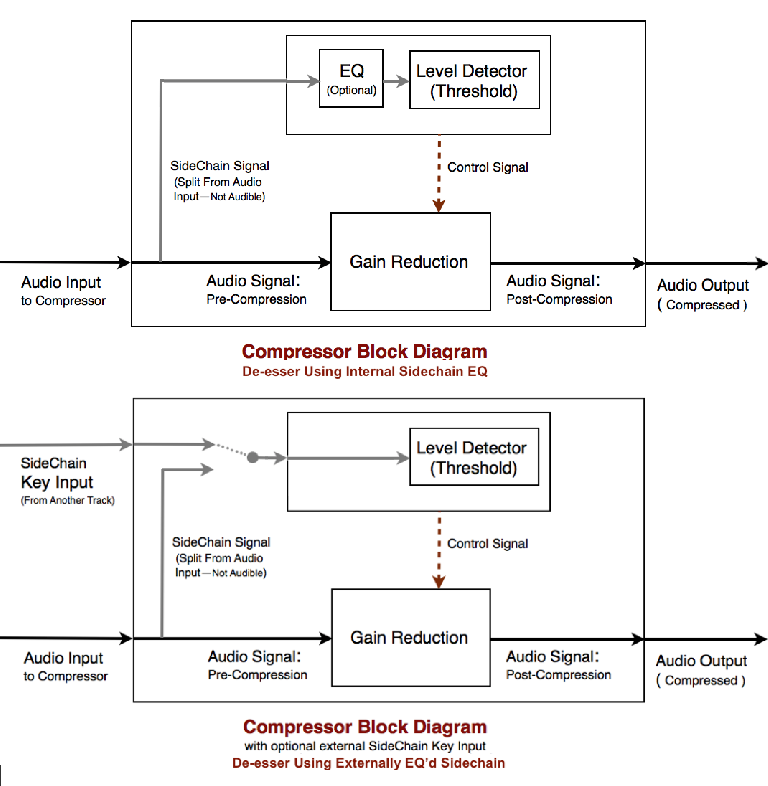 Even if a compressor doesn’t include sidechain EQ, if it has an external sidechain input a copy of the main signal in another track can be EQ’d and fed into the detection circuit, for the same functionality.

While a compressor reduces the gain of louder signals that exceed a user level Threshold, Expanders further reduce the gain of softer signals that fall below a user level Threshold. The most common application for this is the most extreme, where signals below Threshold are not just reduced slightly in level, but reduced all the way down to inaudibility. These portions of the signal are being gated out—typical applications for gating include microphone leakage. 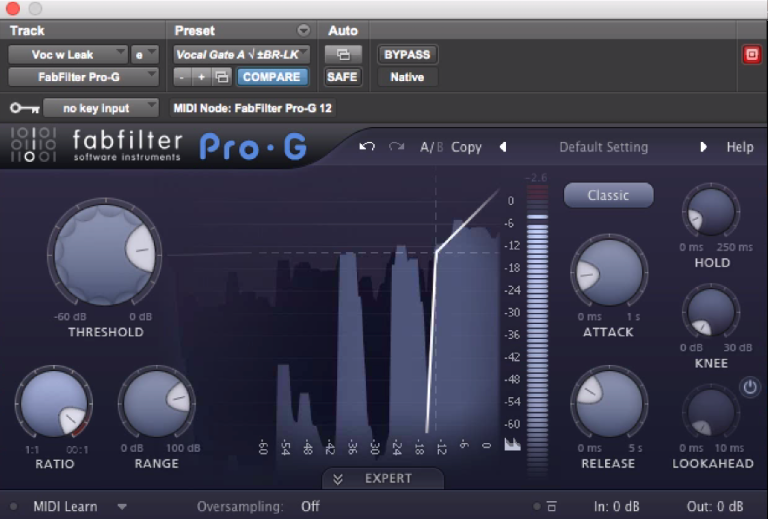 A less extreme application for an Expander might be reducing excessively prominent breaths between phrases in a vocal performance. You might not want to completely eliminate them because that tends to sound unnatural, but lowering their level a bit with a less extreme Expander setting can often be the perfect solution.

On the creative side, a common Gating trick again utilizes an external sidechain input. If the timing of a bass track is not tight enough against the kick, an Expander/Gate is inserted in the bass track. The kick track is fed as the gate’s sidechain input, and the Gate is set so the bass track only opens up when the kick plays, locking it in tight musical time.

So the next time you’re dialing up those classic compression effects, don’t forget these less glamorous applications—they’re also mainstays in music production.