Language
The iPad is fast becoming a fully featured platform for audio production. We give you the lowdown on how it could even become your main studio tool'¦

When the iPad was released in 2010, nobody could have predicted just how much it would change the lives of millions of people. Those working with music have seen it evolve its own ecosystem of apps and accessories that can rival computer-based setups from a few years ago, and the pace of development in this field is breathtaking. The toylike beatboxes and simple pianos of the early days have been replaced by powerful synths and fully featured mobile DAWs with astonishing feature sets. All of this is made possible by the ever-increasing power of the iPad: most apps will run on an iPad 2 or higher, though you'll have a much smoother ride on a newer model.

The principles of recording and producing on an iPad aren't radically different to recording using tape or a computer. You need an input device, something to listen on and some software to generate sounds and record audio. The vast majority of developers are really good at interface design, so learning how to use mobile apps is often easier than picking up desktop paradigms: the limited space on the screen actually focuses your mind on the task at hand.

If you're recording audio and MIDI, you will need some kind of input device and luckily there are a fair few on the market these days. Many are even dual purpose, working with your Mac or PC and with iOS via Apple's Camera Connection Kit which translates a USB plug to an iPad one, either a 30-pin dock or more likely these days, a Lightning connector. This works thanks to Core Audio  and Core MIDI which are built into iOS and means that developers can build their boxes to be recognized by apps running on your iPad. There are conventional audio interfaces, MIDI devices and mics that plug directly in, so you can choose one that suits your needs.

Apogee is one example of a developer that is making great strides in creating dual purpose kit, with its JAM and MiC devices as well as the One, Duet and Quartet, which provide top-end audio quality as well as multiple audio I/O and sometimes MIDI too for iPad and Mac. IK Multimedia also has a good range of hardware, including the iRig Mic, Pre, Keys and MIDI devices for getting audio and MIDI into your iPad. Focusrite, another builder of excellent studio kit, makes the iTrack Solo and the more heavyweight Scarlett 18i20, which joins the pro audio and iOS worlds together in ways you might not have thought possible. Roland is in on the act too, with its Duo-Capture EX and larger Studio Capture devices again bringing studio-level I/O to the iOS world. 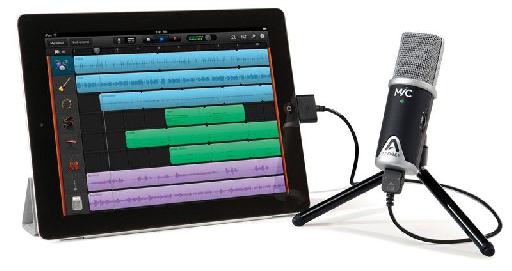 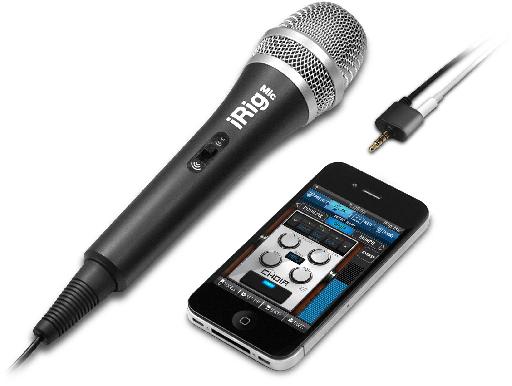 IK Multimedia makes a range of iOS-compatible input devices like the iRig Mic. 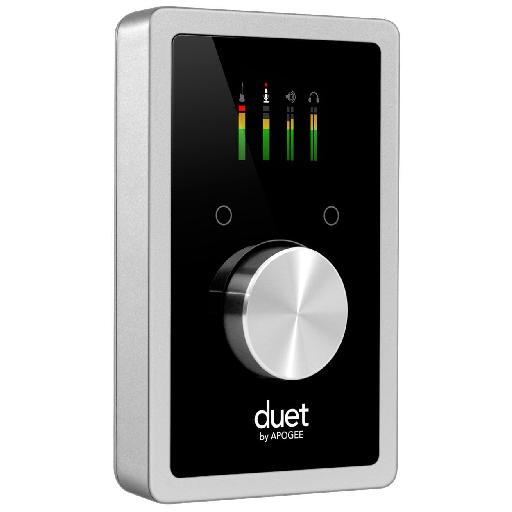 Apogee's Duet 2 is a good example of a quality interface that runs both on OS X and iOS.

There's even a new category of devices, the iPad pro audio dock, which aims to solve some of the more common workflow issues with using this new platform. Focusrite's new iTrack Dock is adaptable to hold a Mini or full-sized Lightning iPad and as well as charging your device, provides Focusrite converters with over 105 dB of dynamic range, up to 24-bit, 96 kHz recording, phantom powered mic preamps, a USB MIDI port for connecting a MIDI controller and direct monitoring for eliminating latency, amongst other features including monitor outputs. Griffin makes the StudioConnect HD with a fairly similar feature set, and Alesis makes the iO Dock and iO Mix, both iPad-friendly recording devices. 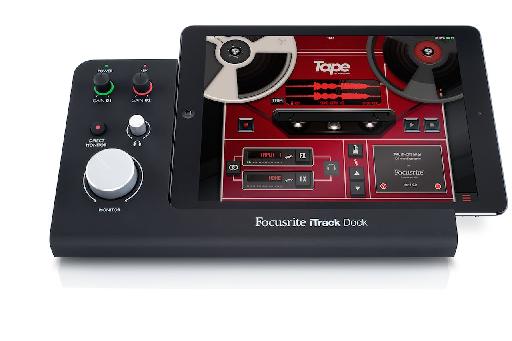 The new Focusrite iTrack Dock solves one of the workflow issues associated with music making and iPads.

When it comes to getting MIDI in, you can of course use the touchscreen, but a dedicated device is better. Kit like the AKAI SynthStation, Arturia BeatStep and Novation's Launchkey, Launch Control and Launchpad Mini are all designed to work with iOS, and you might find that your existing controller does too via the Camera Connection Kit. 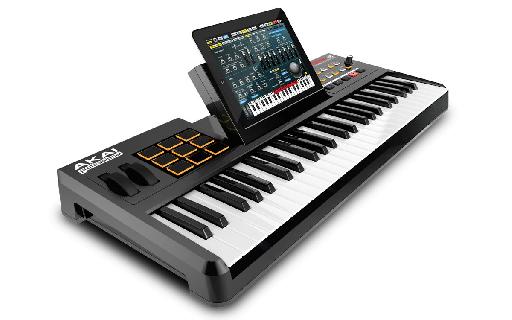 AKAI's SynthStation is a novel way to integrate an iPad into a more conventional studio.

As well as input hardware, you will also need an app to record into. Although there are hundreds on the app store, a few stand out as being more professional if you're serious about what you do. Apple's GarageBand for iOS is very slick and comes with some excellent instruments and loops as well as a sampler, guitar effects and the Smart Instruments to help you play chords more easily. Auria is much more like a conventional DAW in that it has channel strips, plug-ins and allows up to 48 tracks of audio. Steinberg's Cubasis is beautifully designed and does a great job of replicating the Cubase experience on your iPad. Even Image Line is involved, making FL Studio HD for iPad, an interesting and powerful DAW with lots of instruments, and one of the few apps that supports a variety of MIDI input signals. Other multitrackers with MIDI include NanoStudio and Tabletop, a modular studio environment. Apps like IK's Amplitube for iOS can do multitracking via an in-app purchase. 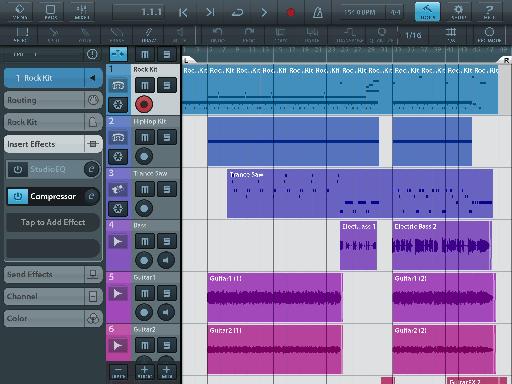 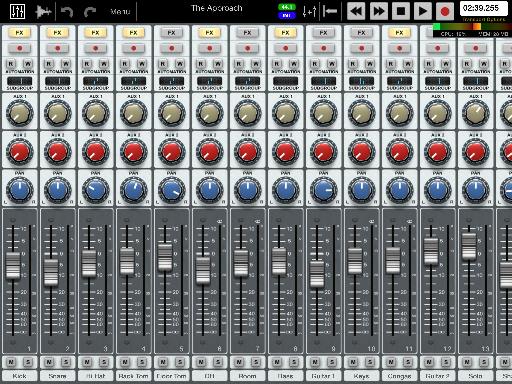 Auria's mixer might look familiar if you're used to real hardware.

iOS is still in many ways a glorified app launcher and despite clever multitasking workarounds by Apple, you still pretty much run one app at a time in the foreground. For music this is a problem because if you have some cool synths by one developer on your system, you want to be able to use them in your mobile DAW made by a different developer. This didn't used to be possible until the invention of technologies like Audiobus, a remarkable system and inexpensive download from the App Store that lets you route audio out of, through and into any compatible app on your iPad. For a full list of compatible apps, see http://audiob.us/apps. Apple has actually built its own, similar system into iOS7. Called Inter-App Audio, it allows the routing of audio between compatible apps too.

Apple also enables the copying and pasting of audio on iOS, which can be really useful since it means no need to export files and re-import them somewhere else. Retronyms makes an excellent free app called AudioCopy for managing your files and you'll find it at http://retronyms.com/audiocopy/index.html. There are many cool instruments for iOS and thanks to Inter-App Audio and Audiobus, you can now incorporate them into your projects more easily, provided your DAW and the instrument in question are compatible. You can trigger third-party instruments from a DAW via internal MIDI and also route sound back to the DAW internally to record it. Factor in an iPad dock and your iPad becomes practically a whole studio. Among the best instruments that I have used, I could mention Propellerhead's Thor, Steinberg's Nanologue, Korg's iMS20 and iPolysix, Animoog, Arturia's iMini, IK's Sampletank and of course GarageBand's own great built-in instruments. If you want to get really in-depth, check out Retronym's Tabletop modular environment or Korg's brand new Gadget suite. 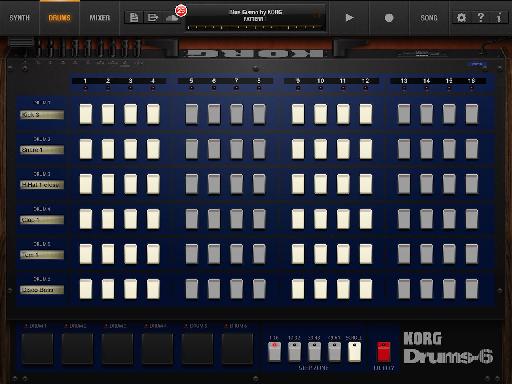 With your audio and MIDI I/O and app set up, you can record just as you would on a computer. You'll need to monitor of course and if you are recording anything with a microphone, this will mean using headphones during recording. Sometimes a headphone out is available on your digital mic, other times you can use the iPad's own headphone port. Most apps allow you to set some latency compensation, though a direct monitoring option like that available on the iTrack Dock can really help too.

Some mobile apps have track limits'"check before buying if in doubt'"but others like Cubasis do not. Auria has 48 tracks of playback and 24 of simultaneous recording. GarageBand has 32 tracks. Obviously there will come a point where your iPad runs out of space or steam, but until then you can track away. Editing without using a mouse can be a learning experience, but it's almost always well implemented, with taps, drags and contextual commands used to chop and arrange audio and MIDI clips. Auria is particularly good here, with an almost desktop-class set of processing tools available.

You can add audio effects in most good music apps and although these won't be as advanced as your desktop selection, they can still be essential to getting a proper sound. EQ, panning and levels are also available and sometimes even automation as found in Auria. By combining some effects that make up a typical mastering chain: EQ, compression and limiting, you can even master your projects as long as the app you're working in allows master effects to be used. Positive Grid is developing a dedicated mastering app and given the company's track record with its BIAS guitar suite, this should be impressive. 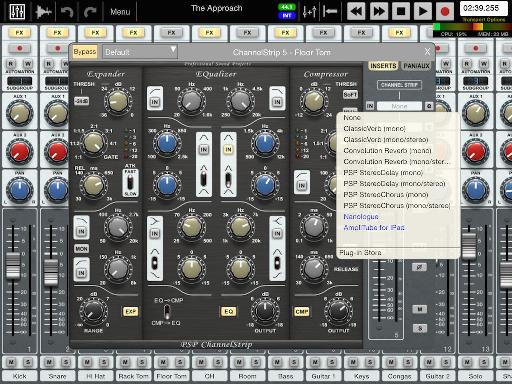 The remarkably fully-featured channel strip in Auria for iPad.

When your project is finished, you'll need to get it off your iPad. All serious apps will let you export to a full quality AIFF or WAV and usually an MP3 or AAC file as well, and upload to YouTube, SoundCloud or similar services, or transfer the file to your computer. Some apps even let you export stems so projects can be mixed on a different system, and others also allow you to move raw project data to your computer to keep working on it or use your desktop plug-ins. Cubasis, GarageBand and FL Studio HD all allow this using the File Sharing section of iTunes, though of those apps only Cubase is dual platform on the desktop. 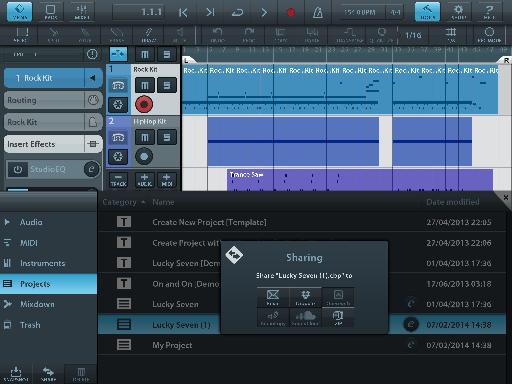 The many export options in Cubasis for iPad.

Go forth and make mobile music

Producing on iPad isn't a world away from producing on the desktop, with a few extra considerations. Desktop-standard I/O for iOS is becoming available now and apps are more powerful than ever. With track limits falling and instruments and effects getting more powerful along with the iPad hardware, there's never been a better time to start making music on your iPad.