The Top 4 DAWs for iPad Today

Language
It's not hot news anymore when we realize that Apple's iPad is now powerful enough to run a dedicated DAW. So, which DAW iOS app is the best around? Here are our top four choices...

One of the most common questions I get as a music technologist is “When will I be able to use my iPad to replace my digital audio workstation?” For many of us, we may hold fast to 'never' as the answer. I'll be honest, I love my Mac Pro. I love my decked out home studio. But after 2 weeks of restricting myself to working solely on my mobile device, I discovered something. I love my iPad, too. For those of you looking to be able to work on the road, or maybe even simply replace your home studio setup with an iOS device—the future is looking very bright.

I took a look at what are widely accepted to be the 5 most popular offerings in the field of iOS DAW recording today. I found that each had strengths that catered to different types of musicians, and I'm very excited to share with you what I've found. Paired up with a quality compatible audio interface, (and there are quite a few of those available these days), you can do some serious work on the iPad starting today! Here are 5 great apps to get you started in no particular order. 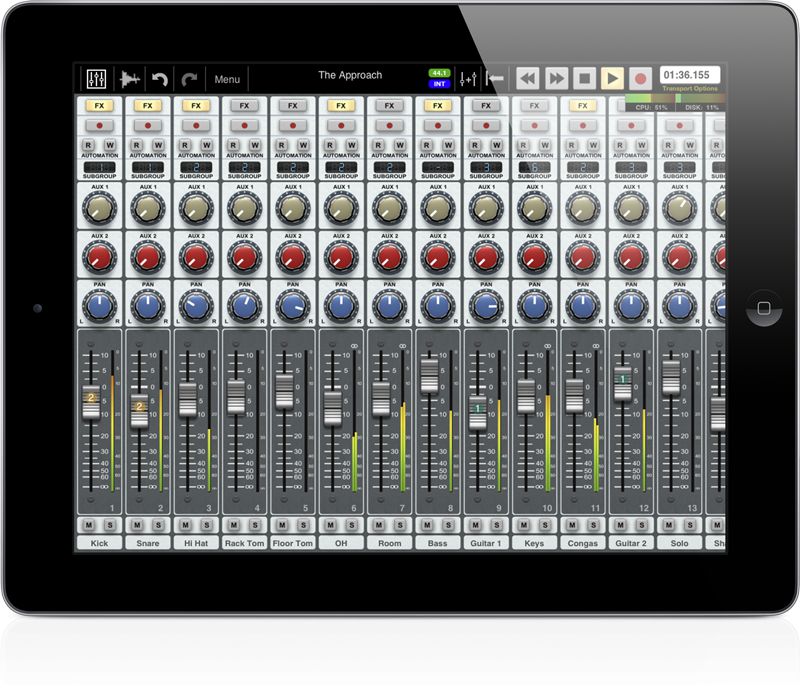 WaveMachine Labs developed Auria for the full-featured audio recording studio user in mind. You can work with 48 tracks of mono or stereo audio at 24bit/96kHz. You can even record a staggering 24 of those tracks simultaneously with a compatible USB audio interface. When using Auria to track, I was incredibly impressed with the amount of headroom there was for mixing and editing. This app didn't just act like a DAW—in many ways, it sonically rivaled them.

Auria includes a full on mixer view as well as a standard DAW tracks view. Within that tracks view you have full editing features that were implemented in an extremely ergonomic and convenient way. I could see myself getting quite fast with this app over time. WaveMachine Labs has also included some classic effects from PSP.  These effects include a full-on channel strip and are stackable 4 per track. A bunch of effects are included and you can also add more through in-app purchase. The PSP MasterStrip is even included, so you can take your project through the mixing stage all the way to mastering with some really great, industry-acclaimed effects.

As if all of these features weren't enough, there is even MIDI sync support with standard Mackie MCU and HUI available for your control surfaces. If you're looking to do straight up audio recording, you can't go wrong with Auria. It's got the features, it's got the expandability, and it really has the headroom to make your mixes sound great.

Auria is currently on sale in the app store for $24.99 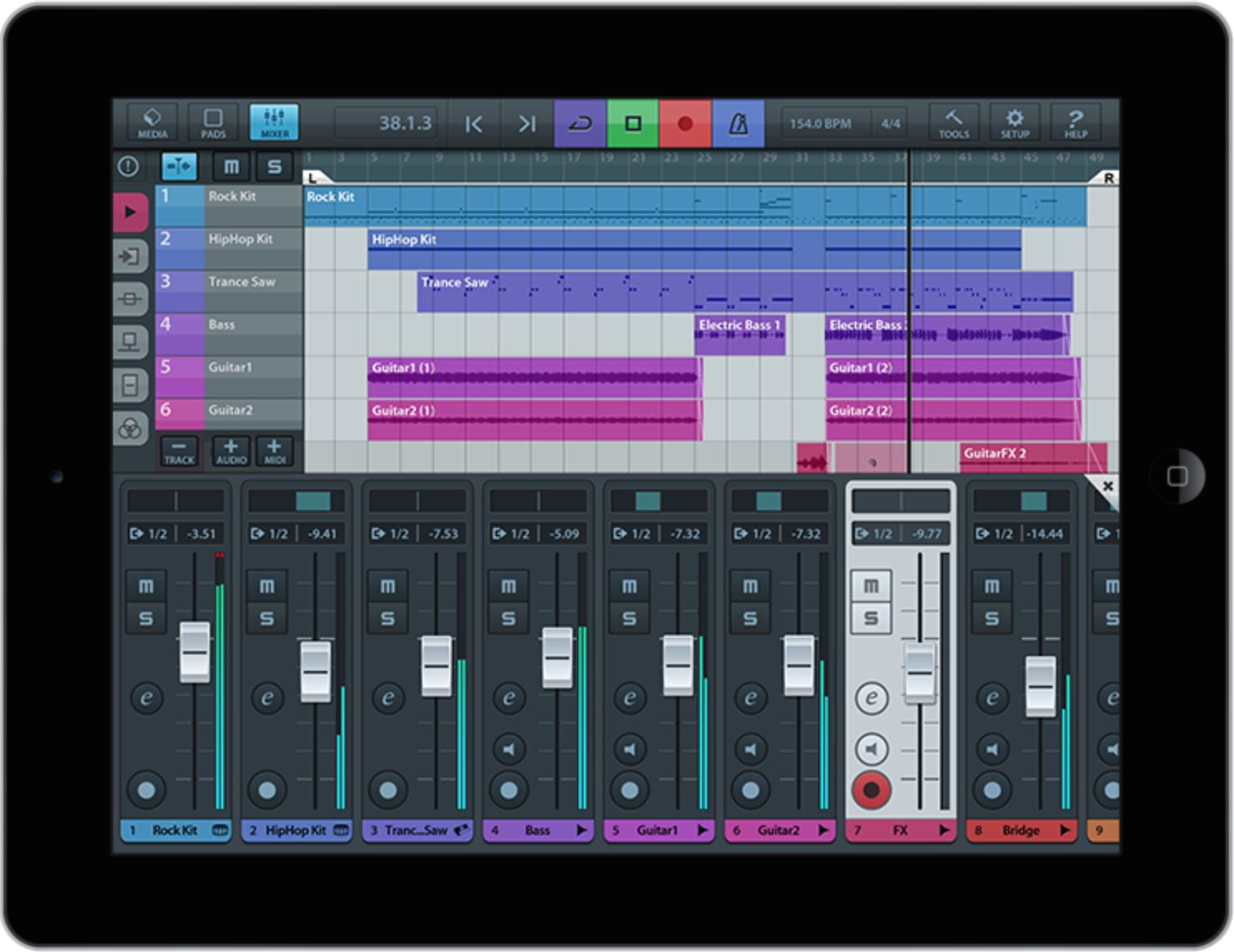 Steinberg's Cubase is a very popular desktop DAW, so it's no surprise that they were one of the first companies to the market with a full-featured music production app for the iPad. Cubasis can also handle 24 inputs simultaneously, but they go so far as to claim unlimited audio and MIDI tracks depending on the device you are running it on.

Cubasis is absolutely packed with features, and the visual aesthetic makes Cubase users feel right at home. In addition to recording audio, you also can record MIDI tracks with a nice built in library of virtual instruments. There's Micro Sonic and Micrologue for both sample-based sounds and synthesizer sounds, as well as a selection of drum loops to choose from for laying down quick grooves. Cubasis features a store as well, and you can purchase additional effects there to really trick out your mix.

If all of that wasn't enough to get you excited, there's an included sample editor and key editor. I plugged in my xKey 37 and was able to craft a song from scratch very quickly. I was also pleased to find that you could export your song directly to Cubase for your desktop computer and continue to work in a more high-powered environment.

All of those features are really cool, but what had me most excited was the fact that Cubasis absolutely has the inter-app audio feature of iOS MASTERED. They've implemented it better than anyone else as far as I can tell. If you have other synth apps or samplers installed such as MorphWiz, Animoog, or Geosynth, they actually show up in Cubasis as virtual instruments—just like on your desktop DAW! So you don't have to go over to them, get a sound going and just 'hope and pray' that when you switch back to Cubasis it can somehow get the audio from that app—any other audio app that supports inter-app audio will show up in Cubasis as a selectable virtual instrument. That really amazed me and I couldn't get enough of playing with that feature.

Cubasis is available in the app store for $49.99 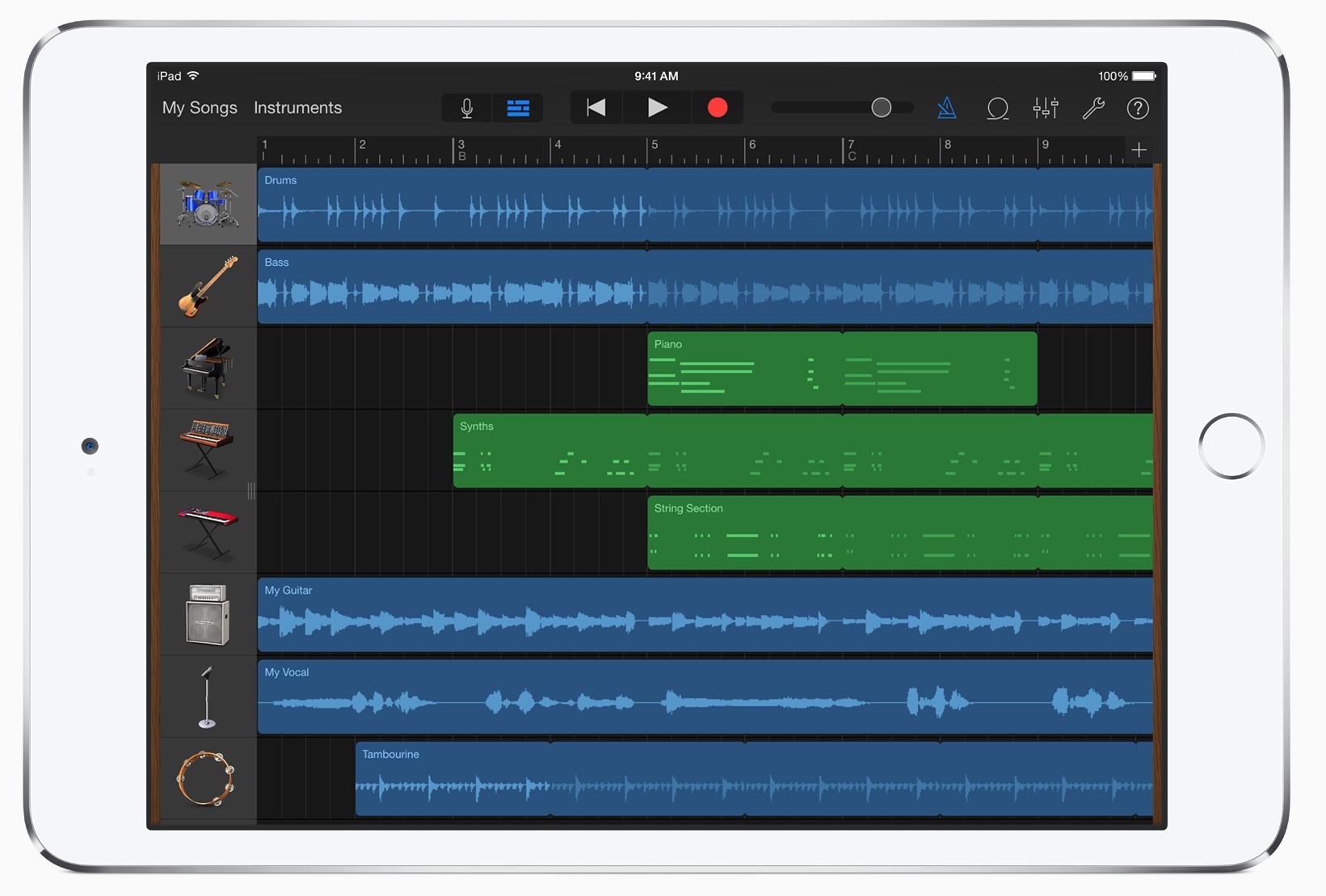 GarageBand is easily the most common 'household name' in iOS recording simply because it is Apple's first party offering. That doesn't mean that it doesn't have its strengths, though! A diverse loop library consisting of a variety of instruments makes it really easy to put together a sketch or outline of a tune in minutes.

The included virtual instruments represent a nice selection of the scaled-back EXS sampler instruments of GarageBand for Mac. Really, just about any standard sound you might need can be found in GarageBand. It's limited to only recording one track at a time right now, so it may not fill the DAW-on-the-go spot you were looking to fill, but if you need to quickly sketch out a song on the fly, it's probably the easiest to use of all the choices out there.

Now we just have to wait for Logic for iPad! (fingers crossed!)

GarageBand is free for qualifying newer iOS 8 compatible devices, and $4.99 for legacy devices. 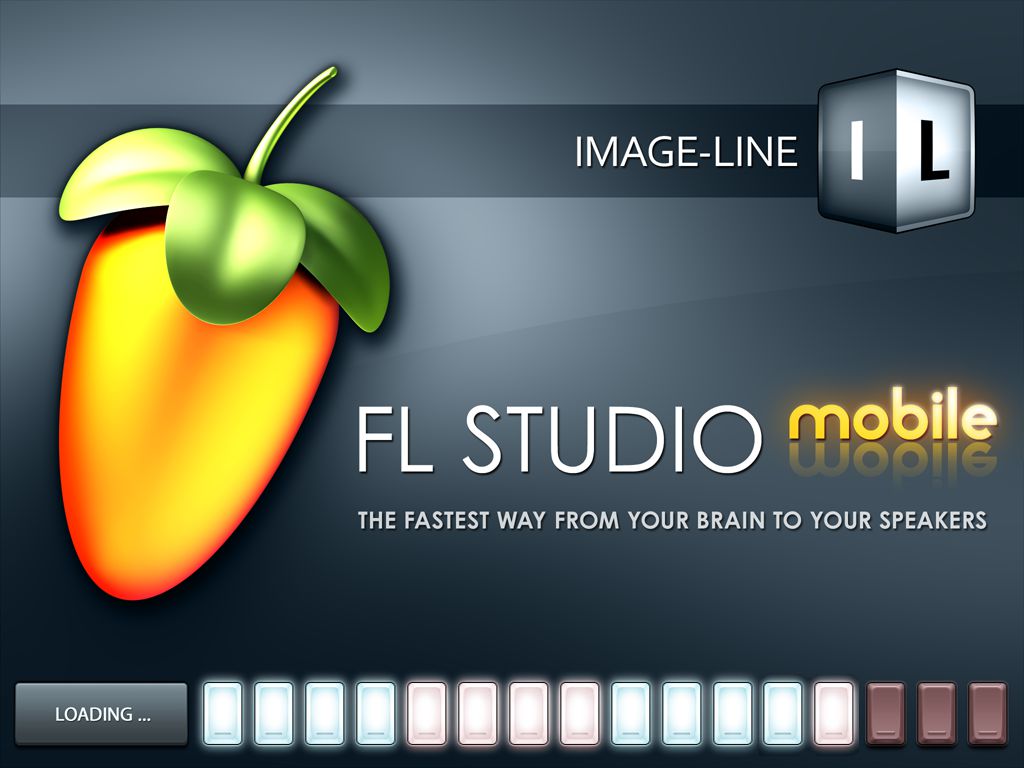 Fruity Loops has come a long way since it's original concept as a beat-creation station on the PC. Now a full-fledged DAW for the PC, (and with HOARDS of Mac users absolutely clamoring for it's appearance on the Mac,) it has spawned a younger brother on the iPad. FL Studio HD is a respectable offering on iOS and has a lot of neat things that make it fun to use. It's a MIDI sequencer, so there are no audio tracks to speak of, but at the fast rate iOS developers update their apps we can hope that audio is not far away!

The interface is designed for quick, quick, SUPER quick navigation. The buttons and touch areas are all quite large, and there are tabs up at the top of the screen that allow you to quickly jump from view to view. Rather than put too much in any one screen, the folks at Image-Line have opted to make the controls much larger (something you may appreciate with a smaller device like the iPad) and split the screen up with navigation tabs.

The sound set for FL Studio is wonderfully diverse, and they have an excellent organization paradigm. Again, since the sounds are all on their own page, you'll find them easy to navigate and find. You can enhance your sound libraries with in-app purchases (of course), but FL Studio really comes with quite the selection of instruments right 'out of the box'. The interface even morphs as you select instruments to drum pads for percussion instruments and keyboards for all other virtual instruments. There is even a waveform sample editor that allows you to record audio, cut it up, and loop it to be used in your projects.

You've got MIDI editing via a piano roll, a plethora of built in effects, And of course, it wouldn't be Fruity Loops without a full-featured step sequencer—don't worry, that's included as well! I was truly impressed with how fast I was able to get around on Fruity Loops Studio HD. They did a great job of getting the technology 'out of the way' so that I could just make music quickly.

J_men
How does NanoStudio stack up against these apps?
Gareth J Farmer
Definitely NOT FL studio mobile! I love the desk top version but the ipad version is weak and limited.
You've also neglected MTDAW, BeatMaker2 and Meteor all respectable DAWs for the iPad and far superior to FL studio Mobile. My default DAW is Meteor