The Pros And Cons Of Using Vintage Amps

Language
Virtual guitar amp emulations are becoming better and better. Does that mean the hardware amp days are numbered? Rich Tozzoli weighs in on the pros and cons of recording with vintage guitar amps.

I’ll be the first to say, I love using guitar amp plugins. In fact, I probably have most of them. They are easy to use, get a great variety of sounds and can be swapped in and out in seconds. But there is still something about the sound and feel of recording with vintage amps that no plugin can give. Let’s take a look at some of the pros and cons of using such amps, and talk to someone who has to fix them often.

One of the primary reasons I turn to vintage amps is for their unique sound. Yes, there are plenty of plugins to get good Fender, Marshall, Soldano sounds and so on, but they don’t yet do amps such as Gibsons, Magnatones and Supros. Those amps are unique and they come across that way in recordings. Their tone is thick, nasty and original. 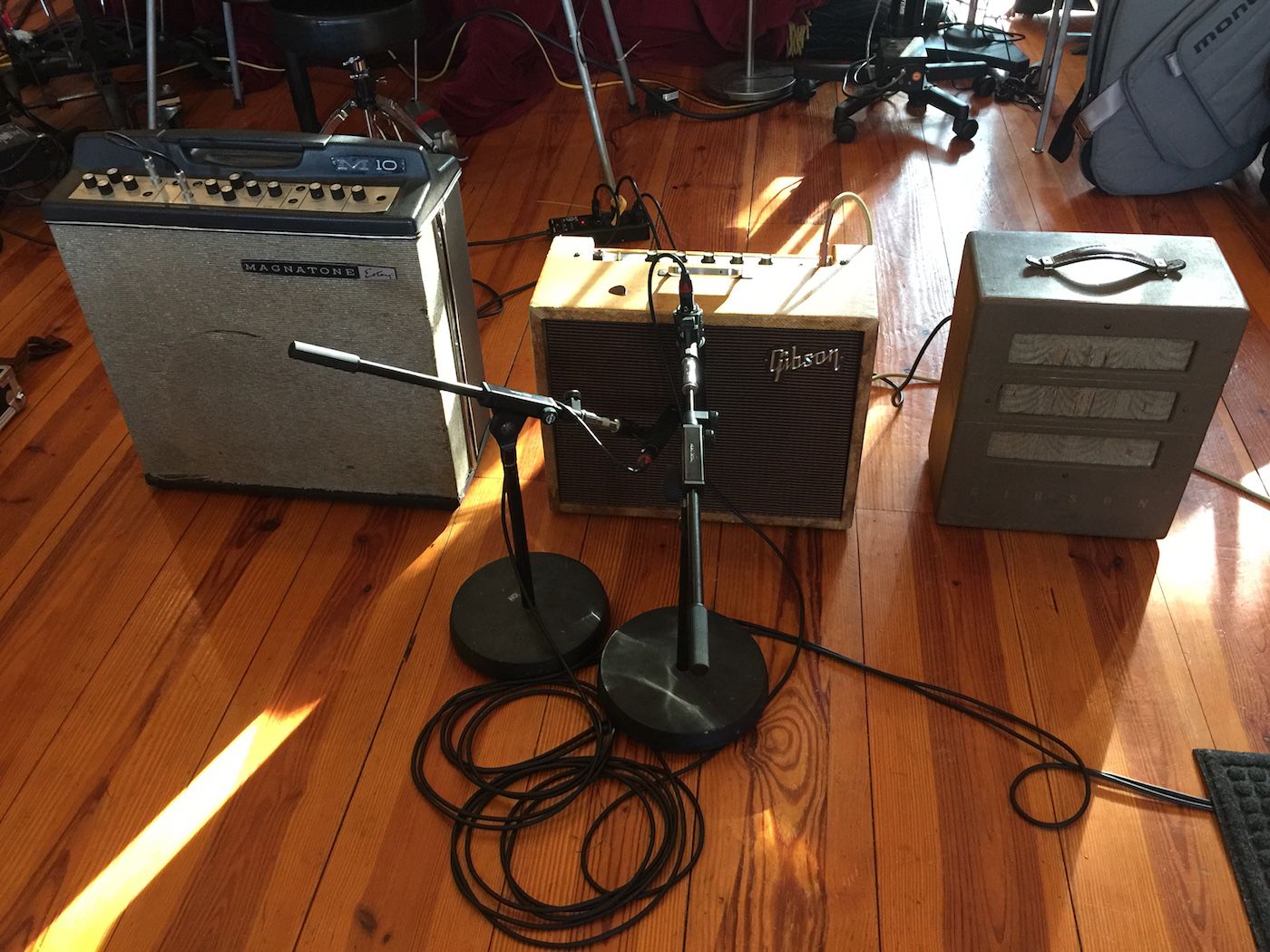 I find most vintage amps sound best when pushed at their input stage using a clean gain pedal. Two that I turn to for this purpose are the TC Electronic Spark Mini and my favorite, the Creation Audio Labs Holy Fire. Using these pedals to drive the input of amps, you get more edge, grit and tone. I especially find this true with low wattage old Gibson amps, which with a Holy Fire in front of them, can turn into tone monsters.

Vintage amps, especially good tube ones, have a finger touch sensitivity that plugins don’t have. I’m not saying just vintage amps in this case, as many other new amps do as well. When you plug into a plugin and play, it sounds really good most of the time, especially with some tweaking. But when you plug into an amp right after that, you notice that you can feel the amp and therefore your sound much more. By digging in a little, the amp responds with a tone growl. By lightening up your touch, the amp responds in kind. That’s the magic of tubes and good old-fashioned circuitry.

One of my favorite things when recording big heavy guitars is to stand right next to the amp using headphones. When I go to the big sounds, I turn to my Mesa Boogie MKIV head and either an Orange or Marshall 4X12 cabinet. The reason I like to stand next to the amp is to feel the air moving and open up the sound in the room. There is nothing like the shaking of your own body when hitting those huge chords. This is especially true when I need to record a 7-string guitar, as the low full low B is quite menacing when pounding it out through a 4X12 cabinet. 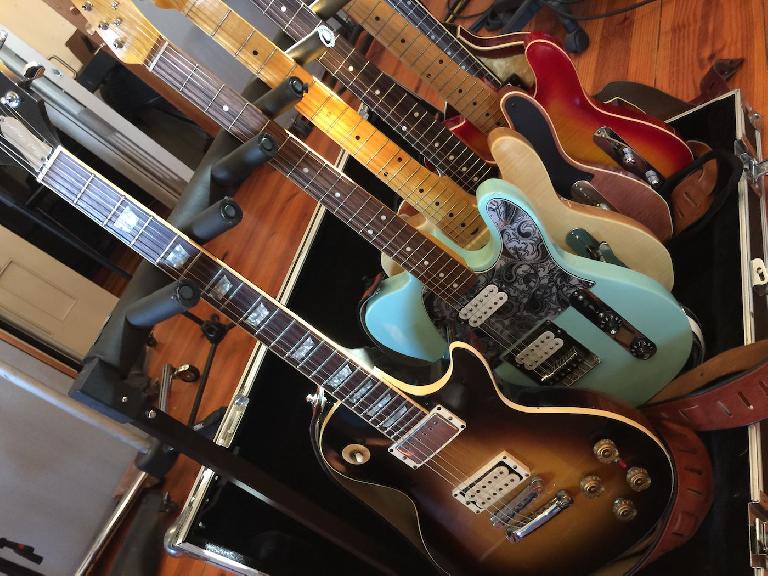 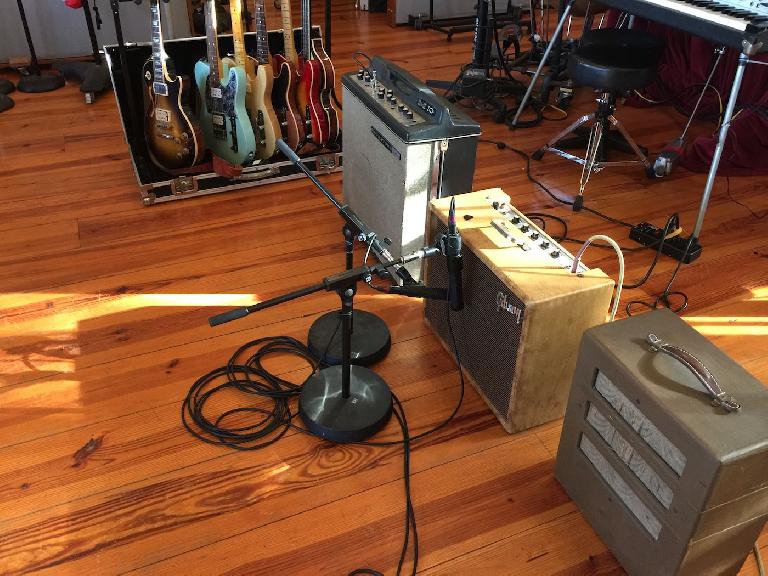 One of the problems of using a vintage amp, or any amp for that matter, is that you have to take the time to mic them up. Unlike a plugin, where you just plugin your guitar and go, you need to choose the proper mics for the job.

To keep things classic and simple, I often turn to two microphones to get the job done. First, the standard Shure SM 57 works every time, and will handle all of that punchy midrange. But to get more low end, I like using either a ribbon mic such as the Beyerdynamic m160, Royer 121, AEA N22 or something like a Sennheiser 421. These mics work every time and by combining two of them and placing them both just to the outside edge of the speaker cone, you’ll always come away happy. 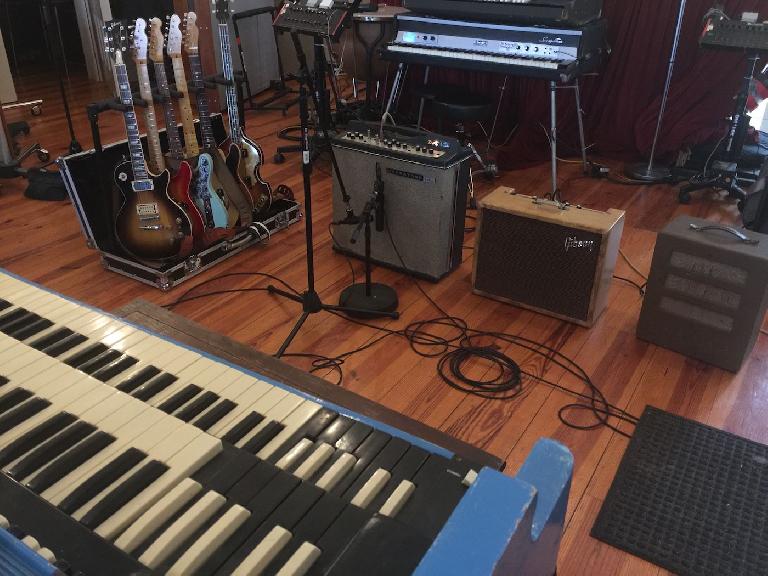 I realize it’s nice to just say ‘go record vintage amps’. You have to actually take time to play them and find the good ones. Then of course you have to pay for them. But I’ve found that there are still good ones out there for a few hundred each, and you can always ask friends or use some at a local studio.

This is one situation where you have to expend some time and effort to go find these amps. But there is no question that it is worth it, and when you play that first chord, you’ll be like ‘oh yea!’.

Chip Verspyck, owner of Tech It Out Inc, located in upstate New York, has fixed just about every type of guitar amp in his over 25 years of business. We asked him what problems does he mostly see in his shop when it comes to vintage amps.

One of the problems I see the most when it comes to older amps is something called a cold solder joint, which is where the solder will form a crack just from age. But, bear in mind you also can find those things in new gear as well. Since the joint are old, it’s simply more common.

Dirt is also another big that cause for amps to fail. Dirt, dust and oxidization interrupt the signal because the shiny metal surface is no longer shiny and conductive when it’s coated with those things. Also, cigarette tar is a problem. Not as many people smoke these days luckily, but they were smoking a ton in studios in the '60s and '70s and so on, and that tar put a film on gear. It literally left a sticky tar on stuff.

So that dirt, dust and tar can get on the sockets of the tubes, the pins of the tubes, the switch contacts and inside the potentiometers and it causes crackles, noises, signal interruptions and nasty distortion and so on. Sometimes you can tap it fixing it “Fonzie Style” and saying, “hey it works again for a minute”, but it will break again. So I have to either clean those things or replace them.

Of course, tubes fail as well. They have a certain life span—they are don’t last forever and wear out like tires on your car or a battery. Other parts that wear out are things like capacitors. A lot of people who know vintage amps know the term ‘recapping’. Capacitors, which exist in virtually every piece of electronics, when they get to a certain age, they start to dry out and fail. They are kind of like little batteries, they have a liquid inside and it dries out. Think of it like a 20-year battery, and it’s going to die at some point and start corroding. You know when you open up an old flashlight and you see that crusty stuff start to come out from the battery? It’s the same thing. You can actually see it happening on the capacitors, there will be little bulges actually coming out of the ends. When that happens, you’ll start to get hum or mushy tone from your amp. The power supply may start to sag and then you can get just outright failure where that capacitor can turn into a dead short and take out a power transformer or an output transformer. So that $5 part that you should have replaced could turn into replacing a $300 part. That’s when you have to bring them in to guys like me to be fixed.