Language
Before the Synth, was the Mellotron. In this engaging article, Lynda Arnold explores its history from its analog beginnings all the way into the digital realm.

I recently worked on a game score demo based on music synthesizers and keyboard instruments from the ’60s and ’70s. Since this was an area of expertise I was not terribly familiar with, I started to do some research into key artists of the time and their instruments of choice. One of the instruments I came across was the Mellotron, a tape-based, analog keyboard that marks the true origin of sampled sound. The choir and flute sounds in particular are iconic, a true sound capsule of musical history. A real Mellotron is hard to come by, so I did some searching around the Internet and found a few free sample libraries. Mello, a sample instrument by UVI, was especially authentic sounding. In the end, I opted to try the Mellotronic 3000 HD instrument App for iOS, a wonderfully sounding representation of this iconic instrument. 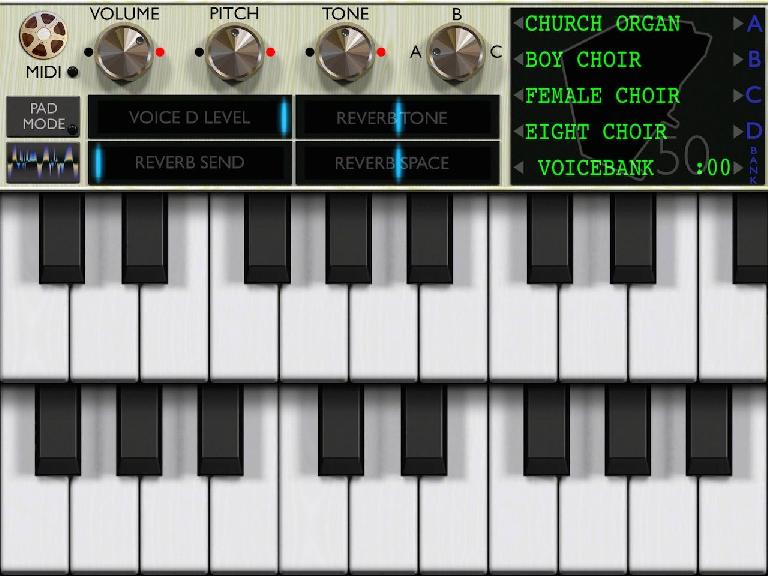 Of course, when it comes to an instrument like the Mellotron, it is impossible to replace it with digital sampling. Integrating this sound into my production inspired me to look further into the history of the Mellotron and to learn why it has a particular sound quality not matched by any other keyboard instrument, whether you like it or not.

The Mellotron has a rich and varied history. The instrument has evolved many times since it was first created in the ’60s, always finding a way to become cool again with popular touring and recording artists. It’s no surprise that many young audio producers have no idea of how groundbreaking the Mellotron keyboard was to the future of analog recording and performance, laying the roots for the digitally sampled music making culture of today. If you do not frequent big audio gear trade shows like NAMM or Musikmesse, there’s a good chance you have never seen one, but would recognize the sound from many rock recordings over the years, starting with a little band called The Beatles, among many others.

"The Mellotron is an electro-mechanical, polyphonic tape replay keyboard originally developed in Birmingham England in 1963." (Wikipedia). The first commercially released Mellotron, by Mellotronics Ltd, was based on early experiments by Harry Chamberlin around 1950. Chamberlin patented his technique of using pre-recorded tapes mounted inside of a keyboard. The samples would be played back through the amplifier and speakers whenever a key was pressed. A spring then returned the tape back to the start of the loop for the player to trigger again. Even though sustained notes were not possible, the attacks were reproduced accurately each time you pressed a key. Different sounds were created depending on which part of the tape was being played back. Most notably, were flute, voice and organ sounds. 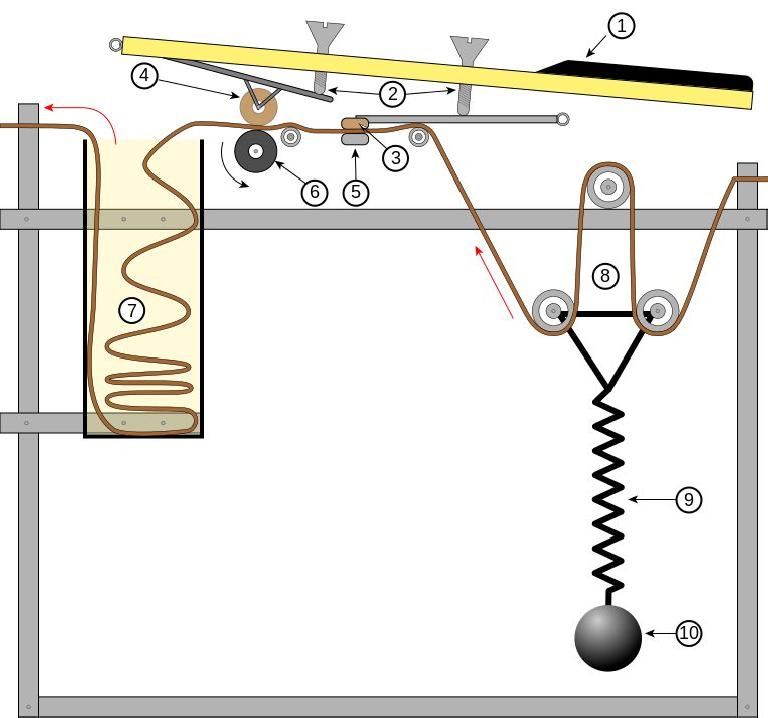 Figure 2 – The inner workings of the Mellotron (Wikipedia)

Mellotronics, Ltd made many improvements on the concept and released the first model called the Mk1 and then the Mk2 with more improvements. The instrument was a monster, weighing in at 350 lb and containing 70 3/8in tape players, a reverb unit, amplifiers and speakers. Many Mellotrons were installed in clubs and theaters as well as recording studios, most notably used by The Beatles in ‘Strawberry Fields Forever,’ and the Moody Blues classic ‘Nights in White Satin.’ 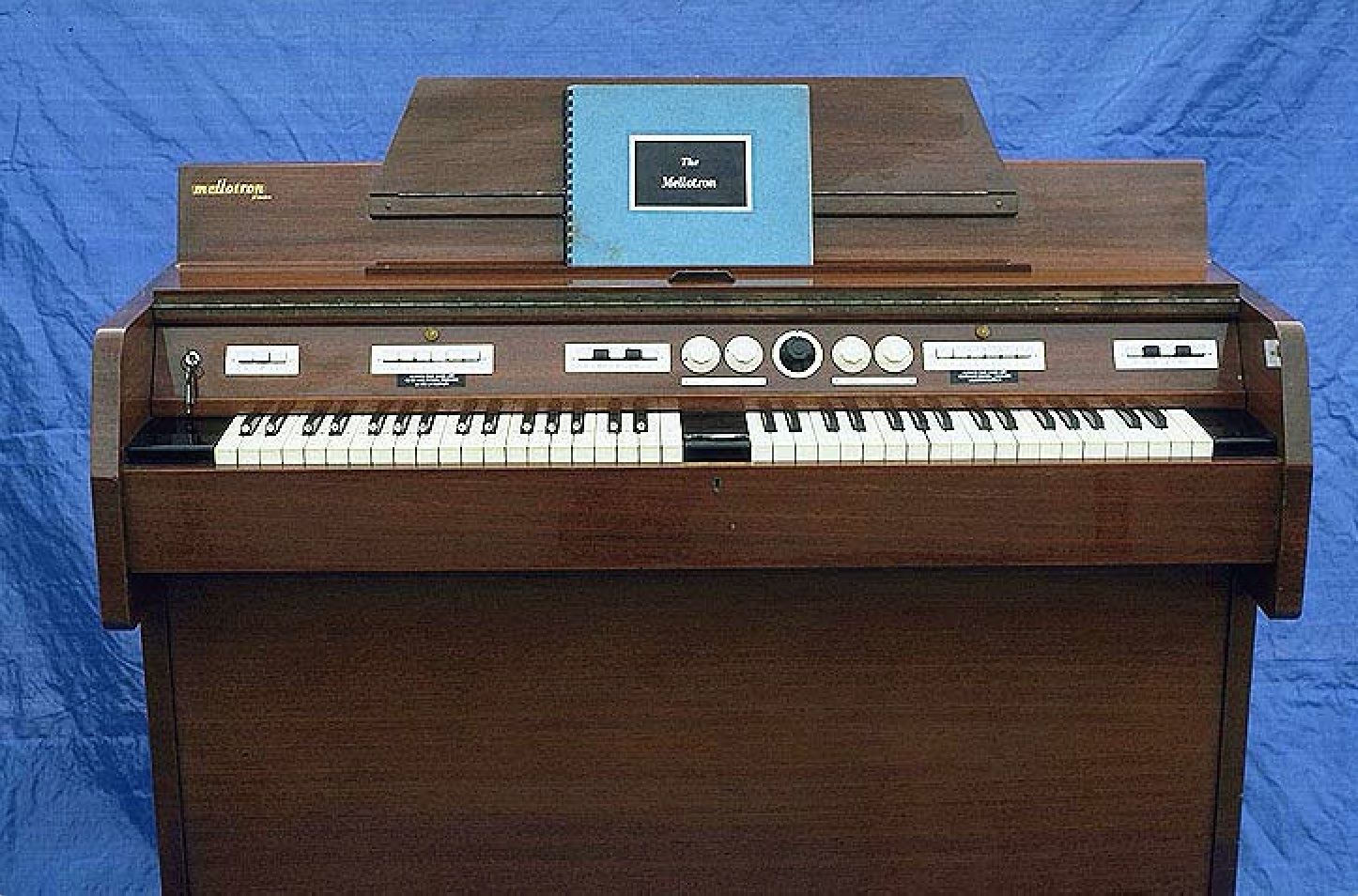 Perhaps the most successful version of the Mellotron was the M400 released in the 1970. Selling almost 2000 units, the M400 was more than 120 lb lighter than its predecessor, containing 35 notes and a removable tape frame to swap out sounds. The Mellotron became the stable sound of progressive rock in the 1970s, especially by King Crimson and then adopted by popular bands Genesis, Yes and Tangerine Dream during the same time period. 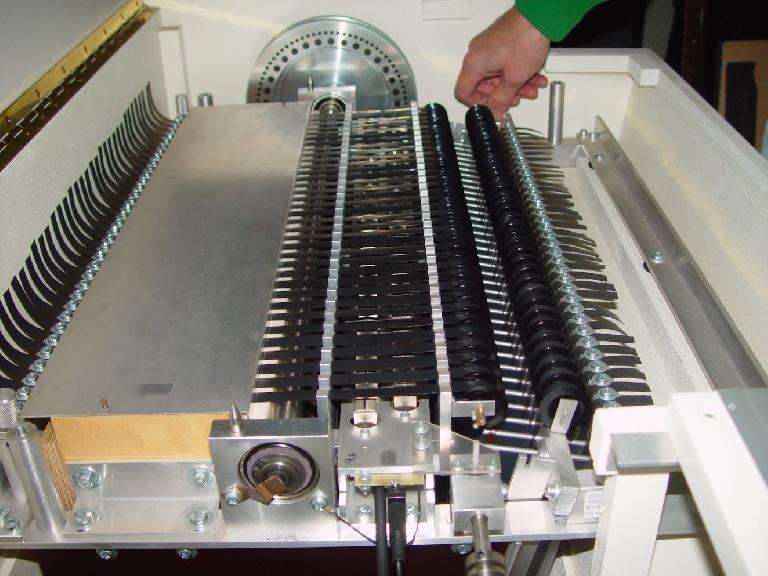 Changing the tape on the Mellotron M400 (Wikipedia)

At the height of the Mellotron’s popularity with touring and performing artists, financial and trademark disputes were filed, forcing the original manufacturing company, Streetly Electronics to branch off and release a road case version of the M400 called the T550 Novatron while another company called Sound Sales, who acquired the original company produced their own model, the 4-Track. Both companies fell apart however in the late ’70s and early ’80s due to the advent of polyphonic synthesizers and cheap, reliable samplers. 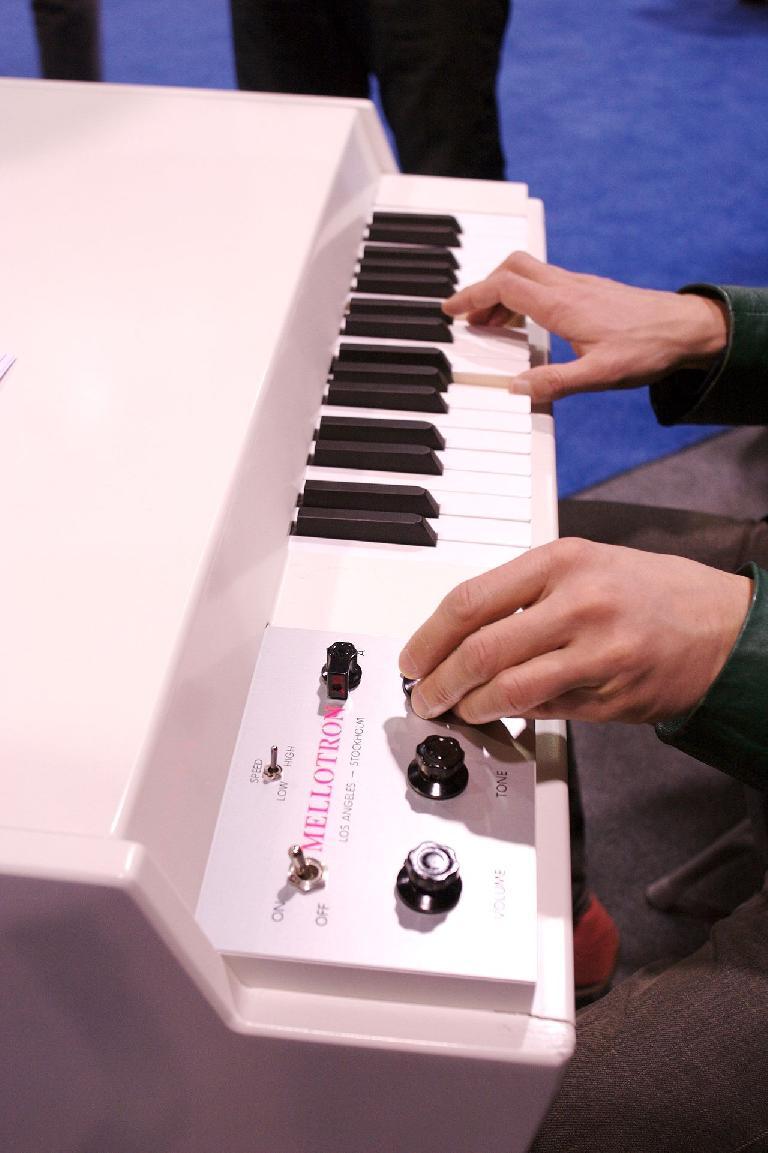 Interest in the Mellotron never waned, however, despite downturn in popularity. The originally manufacturers from Streetly Electronics and other enthusiasts began to refurbish old Mellotrons as well as release sample CDs of the sounds and notable sample recordings to keep the Mellotron sound alive in people’s ears in the 1980s. It wasn’t until the late ’90s that Streetly Electronics decided to release the first new model of the Mellotron in 16 years called the MkVI. It was essentially a M400 with improvements to the mechanics and the electronics. Streetly Electronics continued to refurbish Mellotrons well into the 2000s until the release of their most recent model in 2007, the M4000. The M4000 offered a similar design to the popular M400 with a wide range of usable sounds and the character of the original MKII. The keyboard offered better action and was a bit more travel friendly in terms of weight. Many popular rock artists including Oasis and Radiohead helped the resurgence of the sound in their most revered albums. 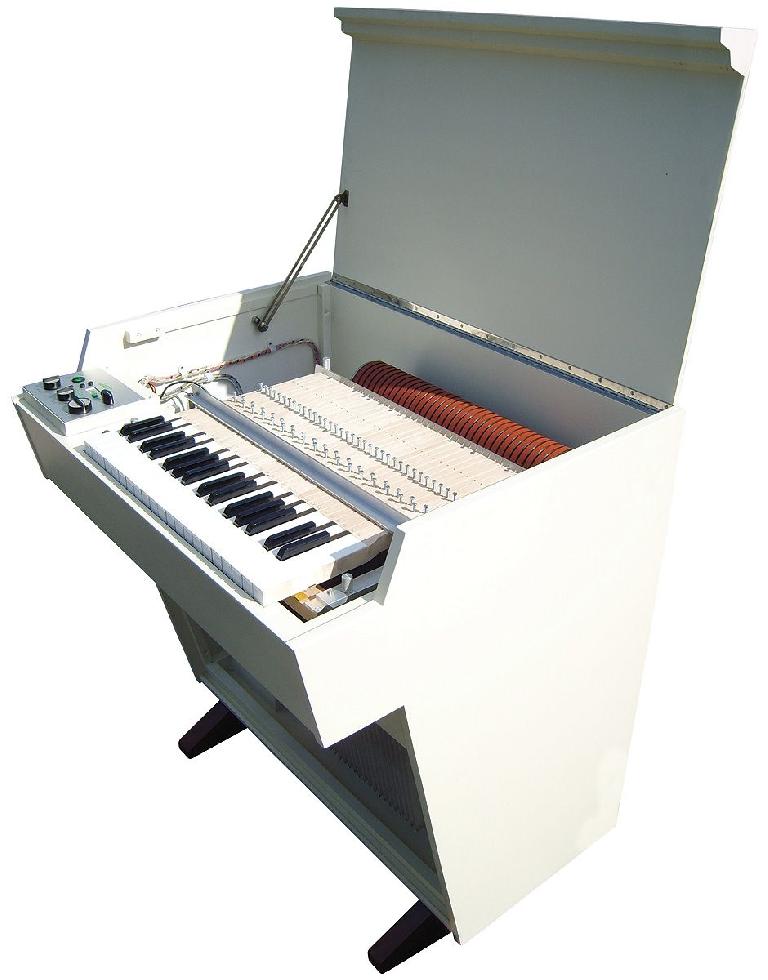 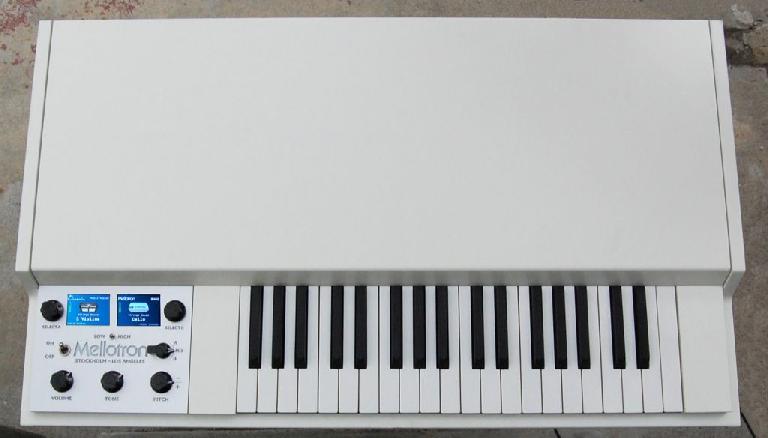 This quick overview of the history of the Mellotron would not be complete without mentioning its digital contemporary, the Mellotron M4000D, M4000D Mini and the M4000D Rack manufactured in the UK by the company now simply called, Mellotron. The M4000D was built with today’s modern touring musician in mind, containing 24-bit digital uncompressed audio with 100 Mellotron and Chamberlin sounds built in. The design mimics the top of the original with depth sensitivity and polyphonic aftertouch. Original controls and digital displays of the original instruments are included on the instrument to the delight of enthusiasts. The M4000D was used on recent tours by the Foo Fighters, Red Hot Chili Peppers and the Smashing Pumpkins, continuing to inspire new recordings with vintage sounds.

A Little Mellotron for Everyone

This leads me back to our current world of sampled, software instruments and apps for iOS. Sampled instruments and free download packs give us the chance to discover instruments of old without having to break the bank on hardware, allowing the joy of incorporating classic sounds into our productions at all levels. I was happy with the parts I was able to play with the M3000HD app for purposes of that project. At the same time, I must admit I was dreaming of getting to play the real thing. We are lucky at this time in the world of audio to have so many options to revisit the sounds of past and also to have people carrying the torch of maintaining the original instruments for all to enjoy.

Learn the essentials for Synthesis HERE.

"Lynda Arnold is a singer/songwriter, multi-instrumentalist (voice, flute, piano, and guitar), and electronic musician/sound artist who has been producing, performing, and developing her own sound for over 12 years as â€˜Divasonic;â€™ an ethereal, song driven electronic music project with multiple album and single releases on labels EMI..." Read More