The Future of Electronic Music Performance

The technology and methods used to perform electronic music live have changed immeasurably over the last couple of decades. But as Sara Simms explains, there's much more still to come.

Technology allows us to create, communicate and perform in new and visionary ways. So what will the future of music performance hold? Recent innovations help to reveal how artists will use technology to express their musical ideas in meaningful ways in years to come. Read on to discover cutting edge musical technologies in use or development, and how these tools may inspire the future of live electronic music.

The Evolution of Performance 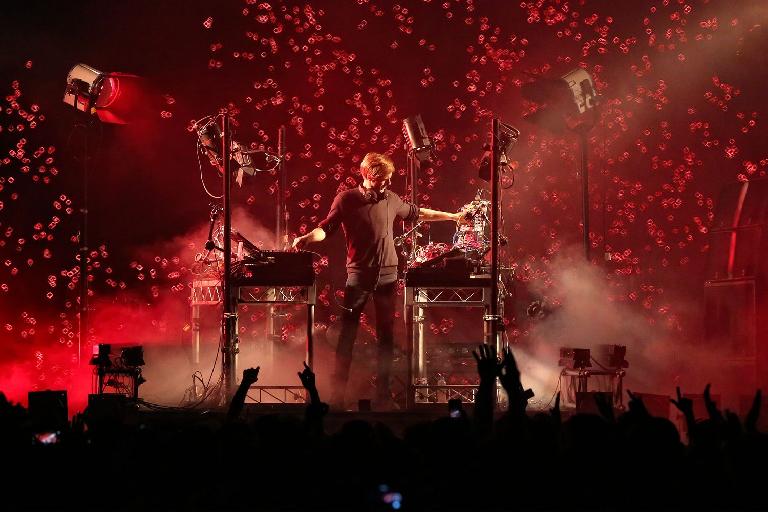 DJs have spent most of their time during live performances time bent over tables, and relying on laptops to play shows. As opposed to traditional bands, audiences who watch DJs and electronic music performers don’t have the opportunity to make the connection between what they are hearing and seeing. Modern electronic music performers are beginning to break down these boundaries by re-inventing live performance. For example, Richie Hawtin’s CLOSE is an audio-visual experience where Hawtin performs beside a semi-circle of equipment, rather than hidden behind it. The shows include a live broadcast of his hands working the gear, so the audience has a bird’s eye view of his performance.

“For a DJ or musician who spent most of my like behind a table half-concealed, opening up completely to the audience is really, really strange” -Richie Hawtin 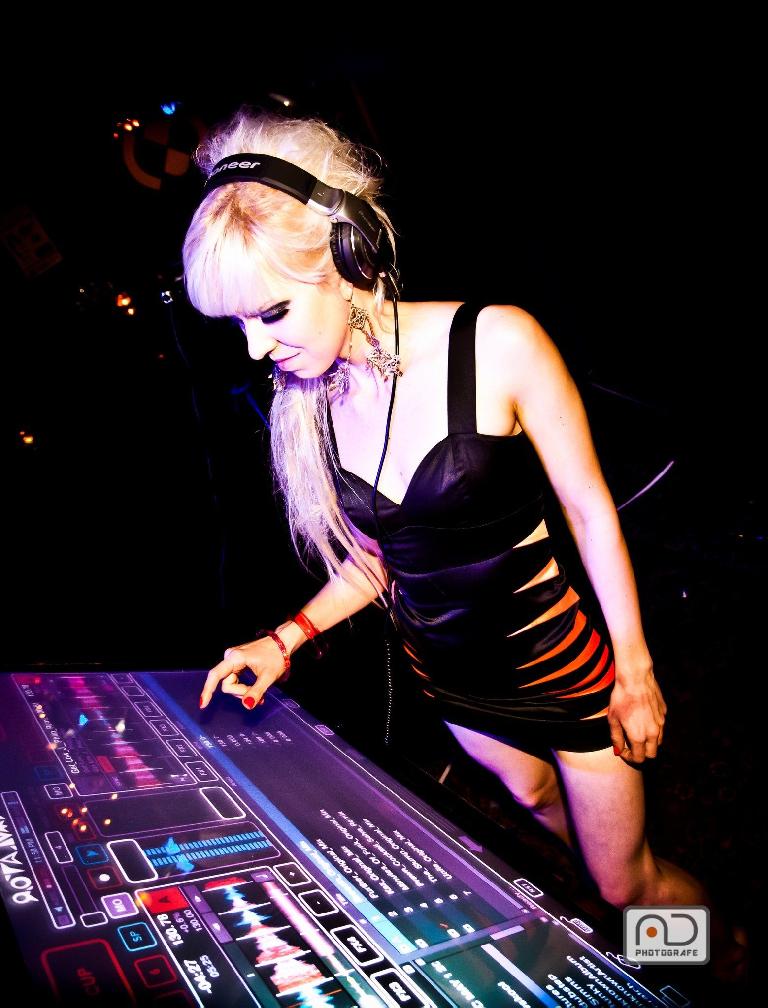 One recent innovation in DJ equipment is touch screen technology. What makes this technology so important is the fact that artists can communicate their emotions into the performance by using their hands to express musical ideas. I believe it’s likely that more equipment with touch screens will be developed, as touch screens help to minimize the amount of time that performers need to spend on their laptops during shows.

Reloop has recently released Touch, a DJ controller equipped with a 7” touch screen. The touch screen can be used to mix music, visuals or video clips, controlling effects and browsing through a music library. The controller is made for Virtual DJ 8, but is also works with DJ software via MIDI.

Touch Innovations have released a series of multi-touch control systems with transparent touch screens. The screens come bundled with Emulator 2 DJ software, and the real advantage to these unique units is the audience can see the DJ’s every movement. The Touch Innovation screens add a visual element to musical performance and help the audience to understand how changes a DJ makes in the software affect the overall sound. 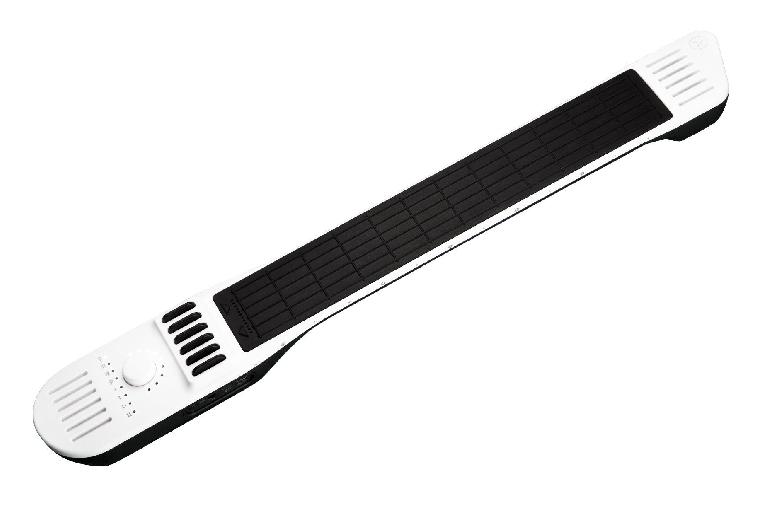 Controllers for music performance allow performers to play any sound on a single interface. It's no longer necessary to purchase a traditional instrument that’s only capable of making one sound. In both the present and future, instruments adapt to our inspiration. Although there are many cutting-edge controllers on the market, the Artiphon and the Joue are two of the best of the new breed of smart controllers.

The Artiphon is a intuitive MIDI multi-instrument that lets you strum or drum any sound. It can be played in multiple positions and used with a wide range of techniques. The Artiphon’s digital strings let players customize tunings, choose fretted or fretless, and even control effects and bends with pressure sensitivity.

Joué is an expressive and mobile modular MIDI controller that feels like a real instrument. Made of wood and metal, the controller is equipped with a polyphonic pressure sensor on which modules like keys, guitar strings or drum pads are placed. This controller responds to gestures like hitting, vibrato, bending and aftertouch, and the soft modules can bring an analog feel to digital sounds.

Technology that artists can wear to perform and control music is now increasingly being used by electronic music performers. Gesture armbands are a new development  that allow DJs and performers to control technology like sound and stage lighting using their hands. Armin Van Buuren is one forward thinking DJ who’s been using the Myo armband in his shows at Ushuaia to control stage effects. The Myo armband works by reading the electrical activity of your muscles to control technology with gestures and motion, hands-free.

Using proprietary EMG sensors, the Myo armband measures electrical activity from your muscles to detect five gestures made by your hands. Using a 9-axis IMU, it also senses the motion, orientation and rotation of your forearm. The Myo armband transmits this information over a Bluetooth Smart connection to communicate with compatible devices. The Myo controllers can also be used by DJs who want to manipulate songs using the muscles in their forearm. It's an interesting and innovative technology that seeks to turn the human hand into a controller, and communicate with current technologies.

Veserium is an electronic music duo based in Las Vegas who created their own performance technology. The group uses their self-invented Tone Sculptor technology to create sound using motions and gestures. Tone Sculptor gloves work by virtual reality motion-tracking technology which is then translated into signals for musical control.

So many aspects of modern life have become digitized and people are increasingly choosing to watch movies and concerts at home, rather than going out. One of the main ways people will likely choose to view music performances in the future is by streaming them. Great live music makes for great content, and performers in an array of genres are beginning to stream shows, allowing fans to experience their sets without leaving the comfort of their couches. The true value in streaming lies in way that artists and audiences can grow closer together, and it may be that we’ll be watching many more concerts via our computers and mobile devices in years to come. One of the largest streaming sites is YouTube, which offers a multitude of shows that are recorded by sites like by Boiler Room, The Lab NY (Mixmag & WAV's weekly livestream), Cercle and many more. Red Bull TV partners with many festivals to broadcast performances on the internet and via its app on multiple devices. Apple Music Festival hosts a weekly or monthly series of concerts, held in small venues, streamed live and archived for Apple Music subscribers.

There are many options available online for musicians who would like to stream and monetize their own concerts. Streaming may become more of a viable income source for business-minded artists who want an intimate way to connect with their fans without hitting the road. StageIt is a free live streaming video service which focuses on musicians but can accommodate any live performance or event. Artists can choose when to play and for how long, to a maximum time of 30 minutes with a 20 minute encore. The shows are not archived and the experience is designed to be tailored especially for the audience, thus increasing its potential value to them. Tickets are sold on the site using a currency called “Notes” and a tip jar is available. The service is free for musicians to use but StageIt takes 40% of revenue excluding merch sales.

Another Streaming site that may increase in popularity is Huzza, which was recently acquired by Kickstarter. Huzza was set out to bring musicians and their fans closer together through live video. Together the two companies launched Kickstarter Live, where creators of all types and musicians can create live broadcasts of intimate musical performances.

The future of music is upon us, and the next few years will certainly be ones to watch as music performance continues to develop and reflect the modern times we live in. There are many exciting possibilities for artists to explore, from the type of equipment and instruments they use to the way their performances will be seen. Only time will tell how live music will evolve, but the future truly lies in the hands of the artists and how they choose to use the tools available to them.

Learn more about electronic music production and performance in the Ask.Audio Academy: https://ask.audio/academy?nleloc=new-releases