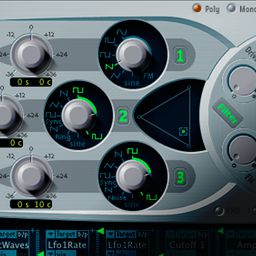 Language
Programming your own synth sounds in Logic's ES2 doesn't have to be scary! Using the presets under 'Tutorial Settings' can help speed up the process. It can also be very fun. Read on to learn more.

Logic Pro has some of the most powerful synths out of any DAW out there. And, not only are they powerful, they sound amazing as well. Let's keep one thing in mind, though: They are highly complex! How many patches have you made of your own, for example? Can you remember the last time? Ever?

The ES2 has actually come to be my favorite out of all of them. It just has that sound that adds polish and punch to every track I do. It works amazingly as a bass, a pad, an arpeggiated part... I can go on, and on.

However, when you start trying to create a patch with a default ES2, even if you're very, very versed in synthesis, it can be a daunting task. It's just how the Logic boys over at Apple roll! They give you software synthesizers that will stand the test of time. And that's no overstatement.

Apple did give us some "Cliff's Notes" to work with, though. You may not be a synth guru, but most of us know how to tweak.

Tweak = Adjust random knobs and buttons till you get a patch that sounds like what you want.

No, this isn't the Webster definition, this is my own. Don't hate.

You've probably done this number already: you've gone to the preset patches of the ES2, found a pad or strings that you liked, something along those lines, and then slightly modified them, right?

Well, in this tutorial, I'd like to point you to something most synth manufacturers include. Not all of them, but most. These are sometimes called 'Init' patches, sometimes they are called templates. Logic Pro calls them tutorial presets.

Rather than building off of basic oscillators, the way you normally would, this tutorial is going to show you how to build off of very, very basic default patch to speed up your workflow and composing.

First, let me give you another familiar scenario. Think about those moments when you're in the middle of making a new song, track, production, whatever you want to call them. You're listening to your groove, you're having fun. Suddenly, you hear a part in your head being played with a synth patch that is very particular.

You start digging around through the Library, but the sound you're looking for isn't appearing anywhere...and it's such a simple sound. This is where the Tutorial presets come in really handy because they already sound very thick, but are also very, very simple. Let's check them out!

In Logic Pro, open up an empty song project, create a Software Instrument track and instantiate an ES 2 as the instrument: 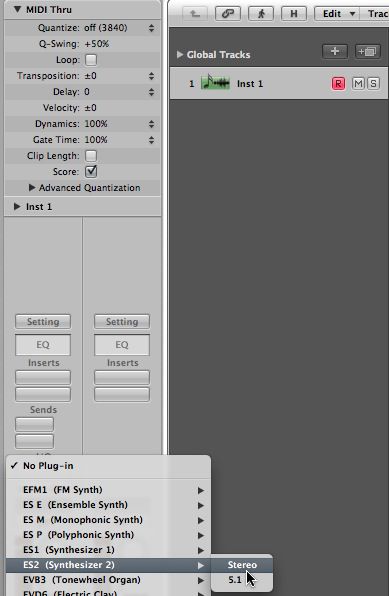 Granted, this exercise is really geared towards what you would do in the middle of a project, but just imagine we're in the thick of it!

In the preset selection menu, go to 12 Tutorial Settings: 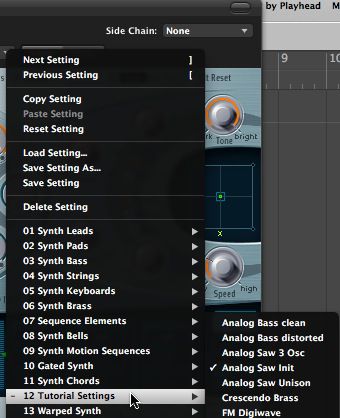 As you can see, there are quite a few patches within this sub-menu. Let me start drawing your attention to some of the usefulness here. For example: there is the Analog Saw Init patch. This is handy because when this patch is selected, it essentially 'zeroes' the ES2, a lot like you'd zero out a mixer. It sets you up with a basic sawtooth patch that you can build from without having to go through and reset the routings to get a basic patch.

Now, let's choose the Analog Saw Unison preset. I start off with this one a lot because it's beefy already, but is very basic at the same time.

Play back some notes on your MIDI Controller or Capslock Keyboard and take a listen:

There are a lot of possibilities with just this simple patch. Because it is so thick, it can be used as an excellent lead, pad, etc. I'd like to make this into a plucky, arp, staccato-style patch.

First, I'll draw in an arpeggiated pattern, this way I can hear the patch programmed the way I'd imagine. 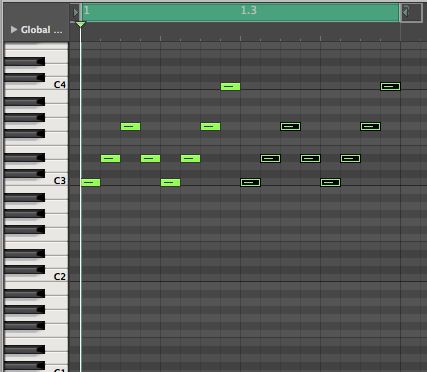 With the arpeggiation programmed, I'll start with the Amp 3 Envelope. I'll lower the Sustain all the way down. Stabs are very bell-like, and we want this note to decay before the played part finishes.

Next, we'll drop the Decay down to around 110 ms.  Let's take a listen to the difference, thus far.

Notice that it's much choppier, but way better in terms of getting more definition and edginess out of our arpeggiated line.

And, we can take it even further. Because the ES2 has some really amazing built-in effects, let's go ahead and stack some of those on, too. I'll go ahead and add on a little bit of Phaser using the Intensity knob, and then lower the speed to 21 Hz. This will add a subtle ethereal effect to the plucky, little synth patch we currently have going.

If I decide, during the course of my quick sound design operation, that I'd like to modify the overall character of my patch, the ES2 can easily accommodate. For example, if I decide the patch might be a hair too thick, I'll pull back on the Analog knob so that it's not detuning quite so much. As the Phaser added a touch of detuning to the already highly detuned default patch, this small tweak will give us back some of the original definition.

As you can see, the ES2, like all of Logic Pro's synths, has a wealth of 'building block' type sounds that can easily help you enhance your library. I'd encourage you to try some of the other tutorial patches. You might end up building an entirely new, original library for yourself.

"No, this isnâ€™t the Webster definition, this is my own. Donâ€™t hate.â€

the ES2 IMO is Logics version of Massive. Id love to turn to the ES2 instead of massive but so many companies cater to Massive and theres just not a lot of patches for the ES2 out there. This article helps to create your own, and thatâ€™s great.


Nick
I recently got Logic Pro X and I found this article very helpful. Thanks!

Question though: how does one know which fader actually does what in the ES2? For example, in the image where you are adjusting the Sustain, the fader seems to be labelled "5". Similarly, in the image where you adjust the Decay, the fader is labelled as "D". Is this short hand nomenclature in audio engineering or is there a key located somewhere in the program that I'm missing?

Sorry if these are silly questions. I'm new to the program and audio design in general. Thanks!

Dennis
4 years later, but the Sustain fader is labeled with a S (not a 5) and Decay with a D. ADSR is a common set of letter abbreviations for attack decay sustain release
Aditk
Hey does anybody know how to create a synth like Russ in the song what they want.
Here's the link: http://m.youtube.com/watch?v=oorK4RPgZ8Q