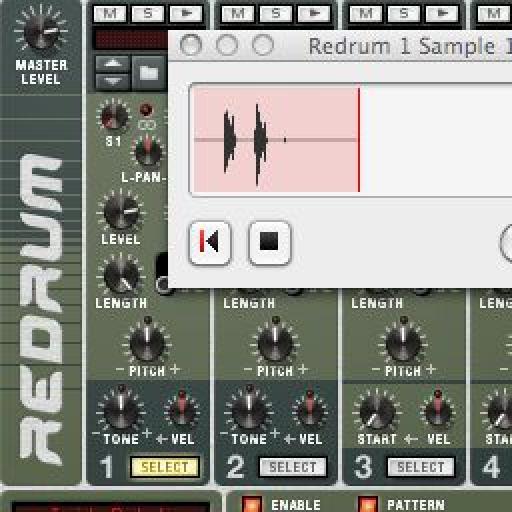 Language
Learn the essential process of sampling in Propellerhead Reason (in this case using ReDrum) with Hollin Jones.
One of the coolest things that Propellerhead introduced in Reason 5 was a new feature where any module that worked with audio samples gained the ability to sample in directly from an audio input. Naturally this has carried across to Reason 6 as well, and it’s a really powerful tool and one that makes Reason perfect for hip hop as well as letting you build your own kits quickly and easily. The concept is simple: several of the modules have sampling capability (the NN19, NN-XT, ReDrum and Kong) and anything you sample into them is stored inside the project file, so there’s no need to worry about where your files are going. Let’s have a look at how it works.

Load up a module—here we’ll choose a ReDrum. Then go to the top of the Rack and hit the Tab key to spin it around. Under the Audio I/O tab you should see that Reason’s Sampling Input is set to read from audio inputs 1 and 2. You can change this to any other input if you have your mic or other source connected for example to inputs 5 and 6 by simply dragging to reassign the cables. In many cases, 1 and 2 are fine. 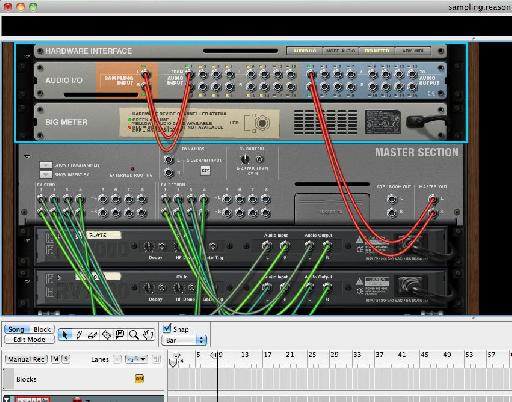 Go back to the ReDrum and choose Edit > Initialize Patch. This clears out all the settings from the beatbox. Go to channel 1 in the ReDrum and near the top you should see button with a tiny waveform icon on it. When you click on this, Reason will immediately start sampling by reading from the input you specified in the previous step. So have your mic or guitar ready to go. 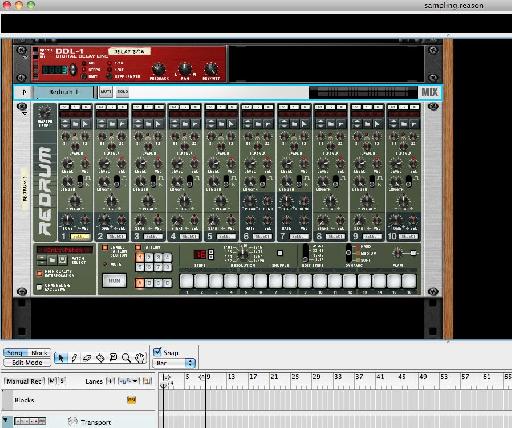 Press the waveform button and the sampling window appears. As this is a drum machine you probably want to record short, percussive sounds, but you can have several takes at getting it right and then edit the sample later. When you’re done, press the Stop button. 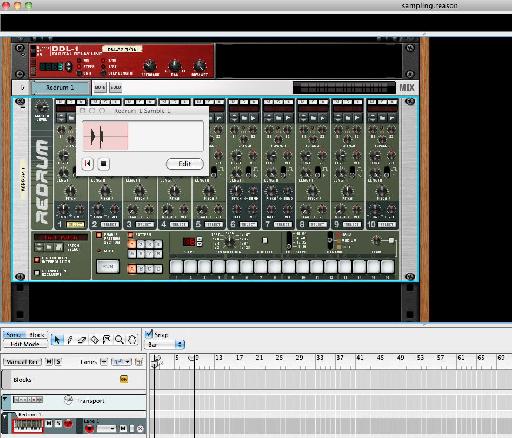 To edit the sample you have two options: Right-click on the name field of the sample you just recorded and select Edit Sample, or open the Tool window and go to the Song Samples tab which is denoted by a waveform icon. Then, click Assigned Samples and ReDrum 1 to see your sample. Click Play to hear it, or check the Autoplay box to have samples audition automatically. 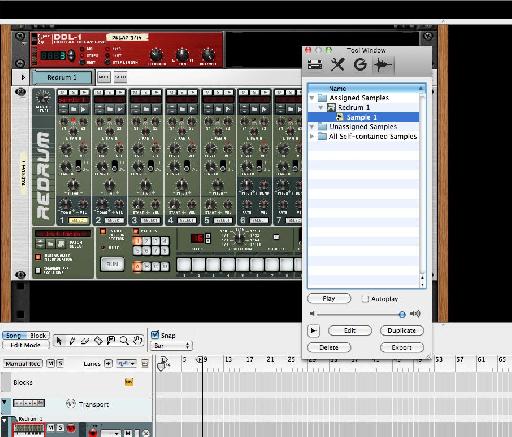 With the sample selected, click the Edit button, which will open the Sample Edit window. From here you can do all sorts of great sample manipulation, starting perhaps with naming the sample sensibly. This is important when you sample a lot, or you end up with loads of samples that are just sequentially numbered. 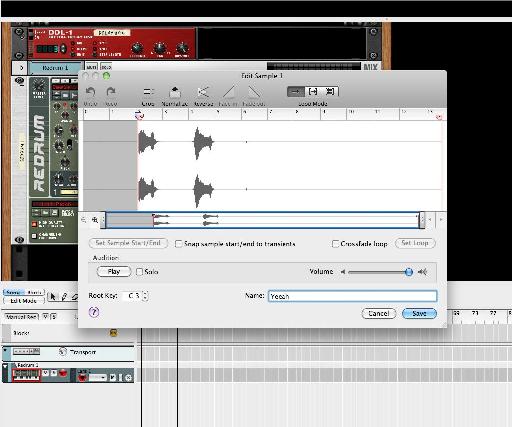 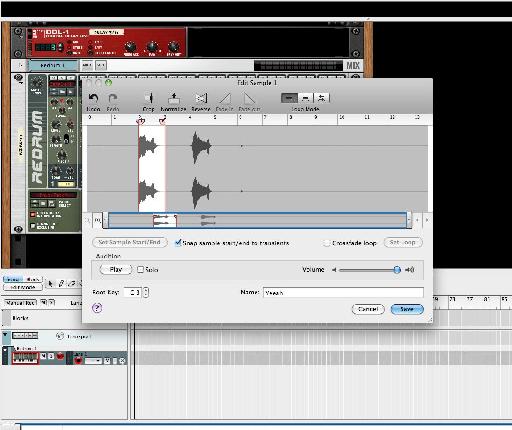 Paso 7
Using the controls near the top right of this window you can set the sample’s loop mode: Off, Forward or Forward and Backward. If you set it to one of the two loop modes, the sample will loop for as long as the MIDI note is held to trigger it. Obviously this can have timing implications if the loop is supposed to sync to the project tempo. Another way to loop samples accurately is to import them as audio loops into the sequencer, where they can be automatically time stretched. 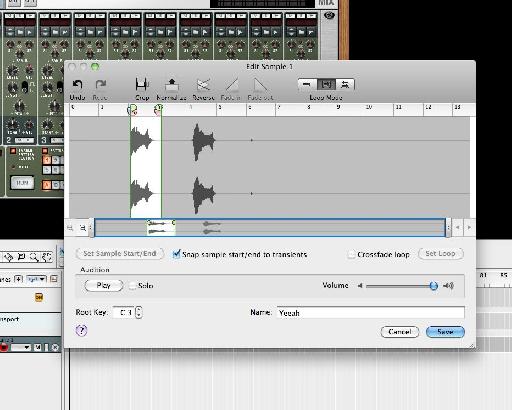 Along the top of the window are audio processing functions including crop, normalize, reverse and fade in/out. These can be used to shorten the sample, make it louder, make it run backwards and also automatically fade when triggered. These are all useful tools and since the action is performed on the sample they save you having to tweak the settings in the rack module to achieve the same thing. 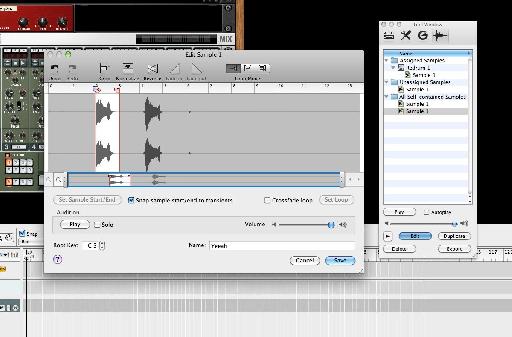 To manually set a loop within sampled audio you can use the mouse to define an area and then choose Set Loop using the button at the bottom, and maybe also Crossfade Loop, which should smooth over any glitches as the sample runs to the end and then jumps back to the start. 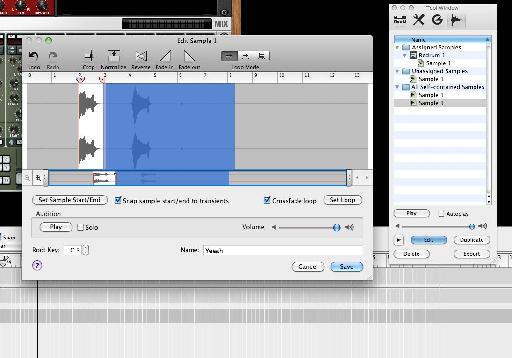 Returning to the Tool window, you are able to manage the samples in your project using the Edit, Delete and Duplicate buttons along the bottom. You’re even able to sample directly into the project file (though not specifically into any device) using the waveform icon button on the Tool window itself. If you click the Export button, you may see a warning window. 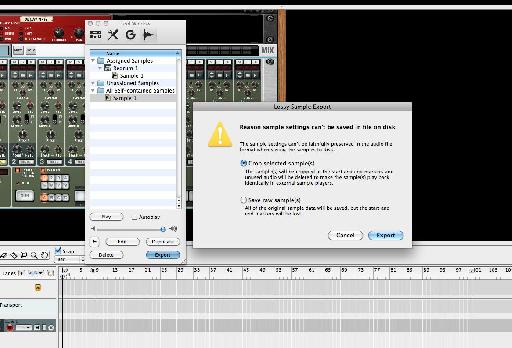 When you have modified a sample, you need to decide how to treat it prior to export. The first option will crop the sample down prior to export and put out only the part you have selected. The second option, “Save Raw Sample” will simply export the original, unedited sample and all the edits you have made to it will be lost. Of course you can do both: Export once using option 1 and again using option 2. 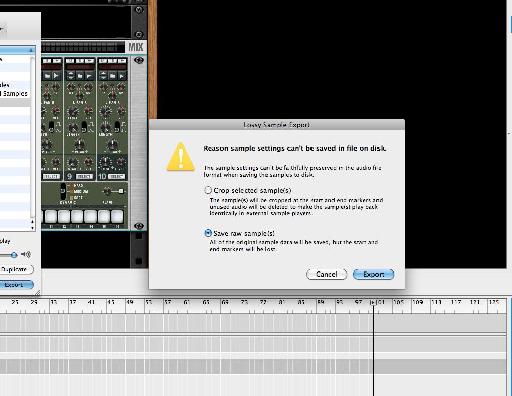 If you do choose to export a sample it will be output to the destination of your choice. As well as for backup, this is great when using Reason as a simple audio sampling and editing device. It’s certainly a quicker and easier way to sample than setting up a DAW with an audio track and then spending ages defining regions.
This is how you sample, edit and export audio samples in Reason. The same basically applies to any sample-capable device and there’s no real limit on the length of the audio you sample. Obviously in an NN-19 or NN-XT you could be more likely to sample longer sections and in a drum machine probably shorter ones. Either way, sampling is fast, fun and friendly in Reason so why not give it a try today?