Language
In this 5-part series, veteran rocker and music technologist, Joe Albano, takes you through the stages for mixing rock music. In part four it's time to bring on the keys and synths.

The word “keyboards”, naturally, encompasses a long list of different instruments. In rock mixes, there have always been the traditional choices—acoustic keyboards, like the piano, and the classic electro-mechanical keyboards, which would include the Rhodes and Wurlitzer electric pianos, the Hohner Clavinet, and the Hammond (B3) organ. And of course, there's the broad category of electric/electronic keys—everything from combo organs (Farfisa and Vox Continental) to traditional analog synths (Moog, ARP, Oberheim), to digital synths (DX7 and beyond) and samplers. And, needless to say, all of the above may come in either physical form, or as Virtual Instrument plug-ins, where the range of synths available incorporates too many options to even try to list! 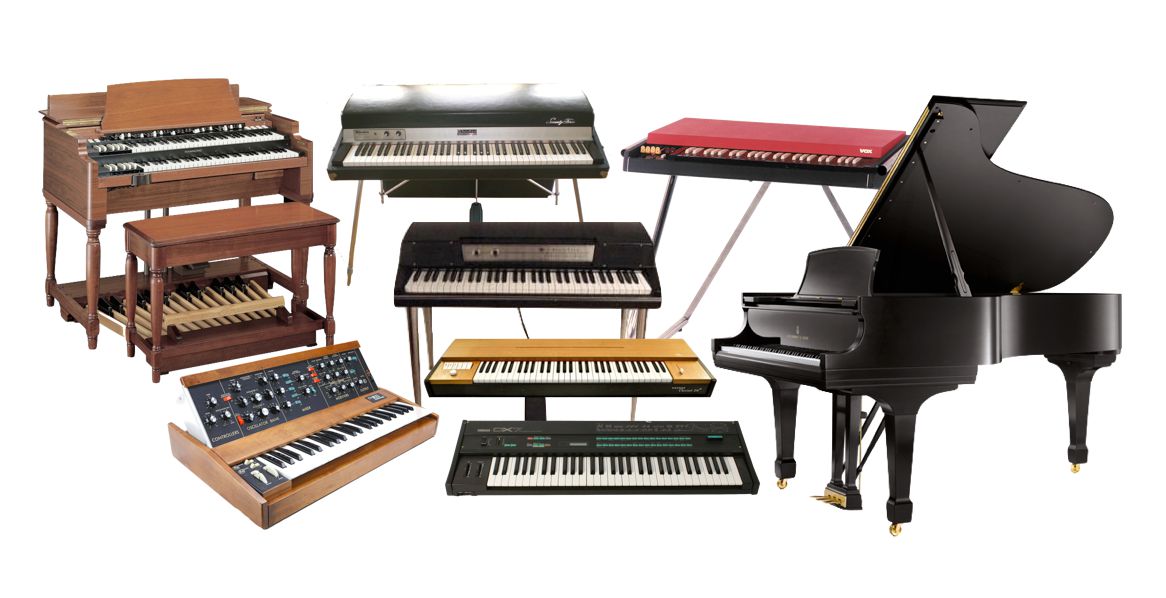 As I talk about approaching keyboards in a mix, I'll be bouncing around a bit, dealing with the different considerations that these various instruments would bring to the table. As I've done in the previous installments of this series, one of the first things I'll look at is stereo placement..

Like a drum kit, most keyboard tracks (nowadays, at least) will probably have been recorded in stereo. This doesn't mean they have to necessarily be kept in stereo in the mix, but it does provide more placement options. There are no hard & fast rules, but there are various conventions as to how placement of the keys can best serve the left-to-right balance of the mix.

For example, acoustic piano—almost always recorded in full stereo—is typically panned wide, hard left and right. But the effect of this would be different than, say, a doubled guitar track—a riff or strumming chords—also panned hard. In the case of the doubled part, the instrument would localize to the extreme edges of the stereo field, leaving a big, empty gap in the center, waiting for other tracks to fill up the space. But a stereo piano recording will fill up that space between the speakers—it won't localize to the edges of the stereo field, but will inhabit a wide space in the middle, filling the stereo field. This can be enough to fill out the stereo field of the mix all on its own, so you have to be careful when it's only one element in a much busier arrangement.

To complicate things, the internal balance of a stereo piano track is not necessarily evenly balanced between right & left. Depending on the mic placement(s), the image may lean more to one side or the other. If you need it to be more balanced, you'll have to employ stereo panning, but be careful. Some stereo panners are really balance controls (i.e. Logic's stereo “pans”), which shift the image by reducing the level of one side and increasing the level of the other. If some notes are more to one side, this can change the note-to-note balance of the instrument, and screw with the performance! Be sure to use an actual stereo panner (i.e. DirMixer in Logic), which can shift the left/right balance while maintaining the relative level of both sides of the recording, preserving the instrument's internal balance properly.

With some (older) sampled pianos, and many synths, the left/right imaging will follow the keyboard, consisting of low notes to one side, gradually shifting to high notes on the other (while there will be a little of this in an acoustic piano recording as well, it's usually much less pronounced). And many synth patches may have a built-in stereo component, like notes that ping-pong from one side to the other. A low-to-high-note stereo keyboard track, in particular, if used in full stereo, will force the mixer to take note of the performance. Is the player playing in one range of the keyboard primarily (or exclusively), like a bass riff (which will probably image to the left only), or some bright, tinkly chords (which will most likely image to the right only)? And does this change in different sections of the song? If so, this will have to be factored into the decisions about panning and imaging not only for that keyboard, but for other instruments that may be chosen to balance out the keyboard track on the opposite side of the mix.

Of course, you can always reduce a keyboard track to mono, or narrow down its width. But what of the opposite situation—you're presented with a mono keyboard track, that you feel needs some stereo width? Well, there are plenty of plug-ins that generate a stereo image from a mono source. 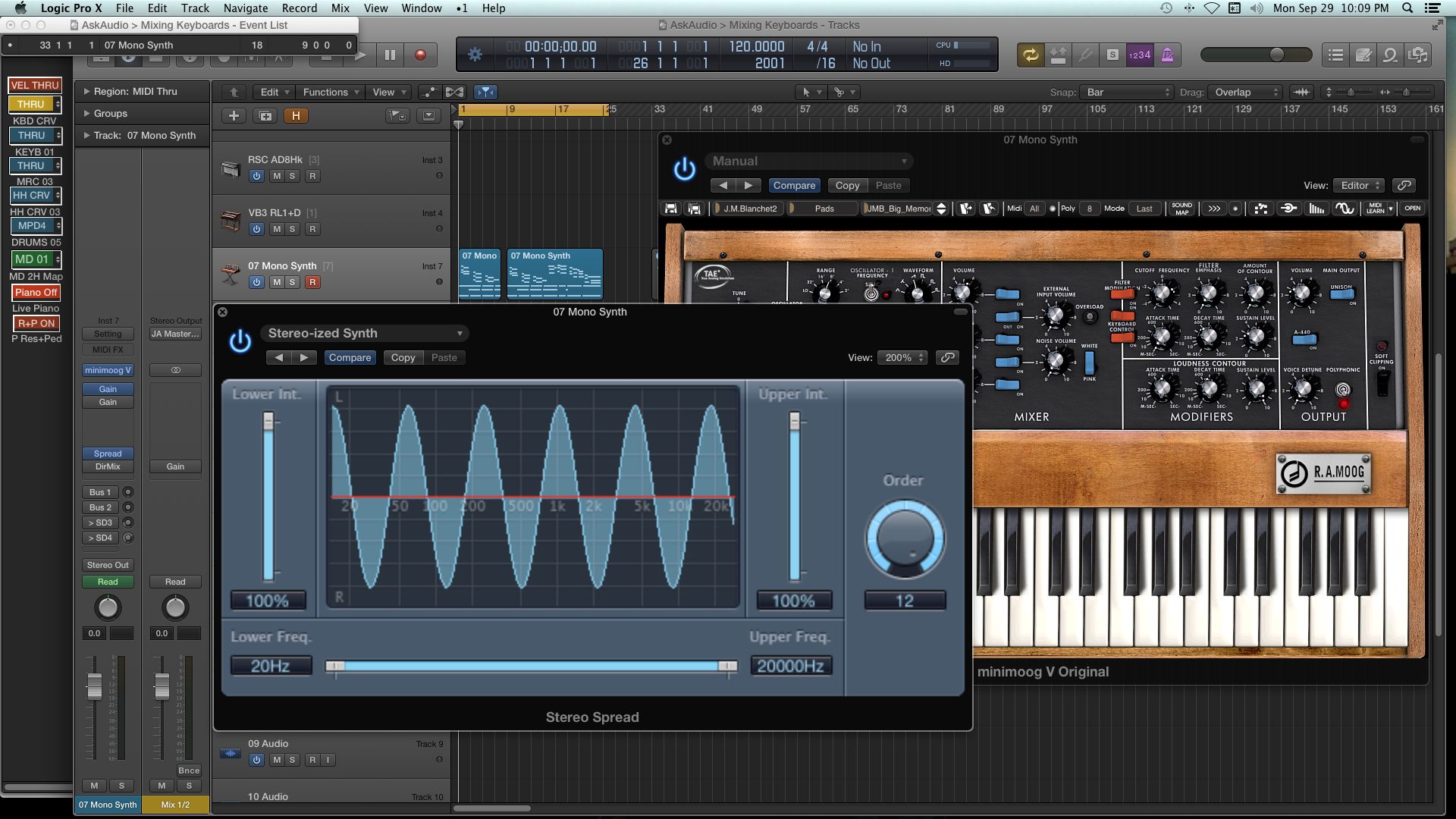 Just be careful not to do it with the old trick of duplicating the track, flipping the polarity of the copy, and panning the two hard L & R. This makes for a wide image when heard in stereo, but if the song itself is ever played in mono (clubs, bars, radio) the two sides will cancel, and that track will disappear entirely!

With so many different types of keyboards, it's impossible to lay out overall guidelines for EQ and compression, so I'll cherry-pick a few examples. EQing keyboard tracks to fit in a mix could follow some of the same guidelines as for acoustic guitars. Many keys (piano, organ, synth) are full-range instruments, tonally, and so they occupy a lot of space in the midrange. Generally, a dip in the lower mids (1k and below) will leave more room, frequency-wise, for other instruments (guitars, vocals)—probably a good idea if the keyboard part is a support part in the arrangement, like a pad, or a secondary rhythm track. (I've been suggesting midrange cuts for most instruments, and it's true that this will generally open up a mix—if you stagger the frequencies, cutting different tracks at different specific ranges, everything may blend together with greater clarity). If the keyboard part is doubling another track (a common arrangement technique, like an octave doubling of the bass), then EQing the keyboard to complement the other track will help create a good blend—for example, if a bass is being doubled, then the keyboard might have some of its low end rolled off, so it adds primarily to the harmonic energy of the bass, affecting the bass's timbre, blending with it, almost making it sound like a different, unique instrument.

Classic electric pianos usually need more presence, a broad bump in the upper mids (3-8k), and possibly a low-end cut (especially if the instrument was recorded direct). You can also run a Rhodes or Wurli track through an amp sim, to get a more interesting take on that presence bump, maybe with a little subtle overload to boot. In fact, running all sorts of keys through amp sims can often be a cool effect—I often find that synth patches (especially analog pads and strings) take on an edge, when run through a virtual amp, that really enhances them in the mix, without having to crank them up too much, level-wise. Even acoustic piano can sound good through an amp—that resulting band-limited tone has been employed on many records. 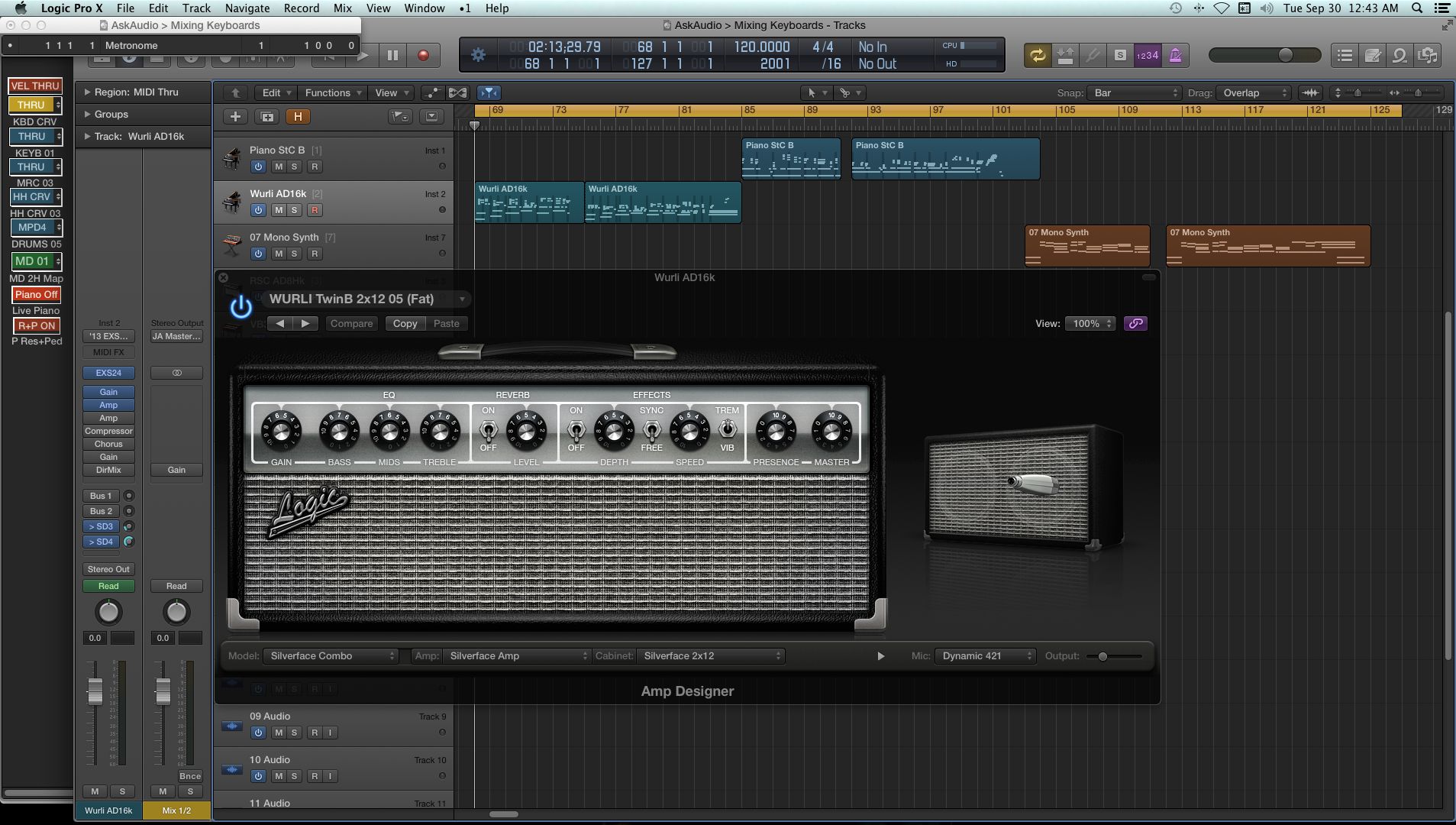 An amp sim plug-in applied to a keyboard.

When it comes to compression, again, it depends on the type of keyboard instrument. Acoustic piano has a wide dynamic range, and will probably sit better in a track if some compression is applied—the compression can even be fairly aggressive (like you get with a typical FET-style comp), which will give the instrument a lot more punch, making it a better match for any distorted (compressed) guitar tracks. Of course, many keyboard parts have little or no dynamic range, like organs or a lot of synth patches, but even here, compression could be employed as an effect (as I described with drums), to mess with the attack & decay characteristics, which can give the keyboard performance a more in-your-face quality, helping it to stand up to more aggressive musical parts of the arrangement.

Of course, keys are an ideal candidate for the usual effects—a little stereo chorusing or flanging can take the edge off a harsh synth sound, or a too-close-miked piano with an overly clunky-sounding tone. But there are plenty of other effects that can add something to a keyboard part. Besides the possible use of amp sims, as I described earlier, a little general distortion can often be employed to good effect, especially with keys that have a relatively mellow sound, or a static tone, like some organ tracks or certain synth parts. One of those cheezy combo organs (Farfisa, Vox) through a fuzz-box effect can go from a light background pad to an aggressive rhythm track—a good counterpoint in the mix for other, edgy guitar parts.

In line with the earlier discussion of imaging, auto-panning can be applied to some keyboard parts for good effect. A repetitive arpeggiated figure in the background might provide a lot more subtle aural interest if it slowly (or even rapidly) swings between left and right. And, of course, reverb and ambience can be used to both enhance the depth of a track, and—if a lot of small-room early reflections are mixed in—to push a support part a bit further back in the mix, when desired. 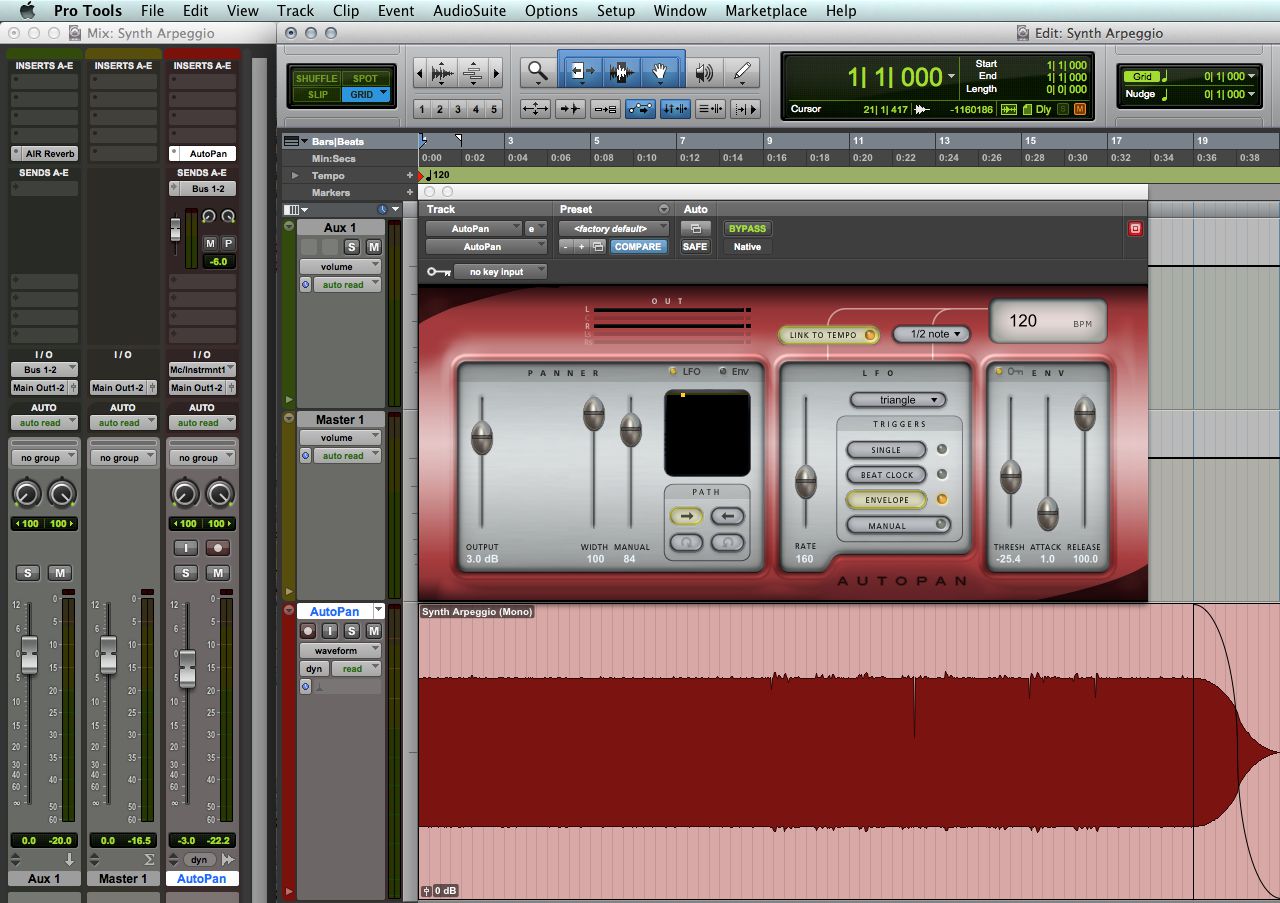 An arpeggiated keyboard part run through an auto-panner:

I'll finish with one more topic, which straddles the line between mixing and arranging. With the wide availability of virtual synths and samplers, there's almost always an option to layer keyboard sounds, even at as late a stage of production as the mix. Sometimes a particular keyboard track just isn't working, mix-wise, even though the performance is not only good, but integral to the musical arrangement. With all the EQ, compression, and FX options, there are times when the sound just needs something more. A lot of keyboard patches already feature layered sounds, like the by-now-clichéd piano+strings, or piano+bells, but if you (and the artist and producer) feel a keyboard track could use another instrument's tone to complement the existing sound, you can still layer something on, even at the mixing stage.

If the keyboard track is a MIDI recording, it's as easy as pie—just duplicate the track, open up another Virtual Instrument, and find a good layering patch. For that matter, if it is a MIDI performance, you can even replace the original sound with a completely different one! (I know a lot of mixers bounce down all the MIDI tracks in the arrangement to audio before they start mixing, but many others don't—I keep all MIDI tracks as MIDI right up until the final Stereo Bounce, for just this extra degree of flexibility.) Even if the keyboard track is audio, it still might be possible to layer/double/replace it, by converting the audio to MIDI. Many DAWs can do this with monophonic tracks, and two—Melodyne editor and Ableton Live 9—can even do it with polyphonic audio. Just be careful with this kind of more extreme strategy—make sure everyone is on board—producer, artist, and especially, the keyboard player! 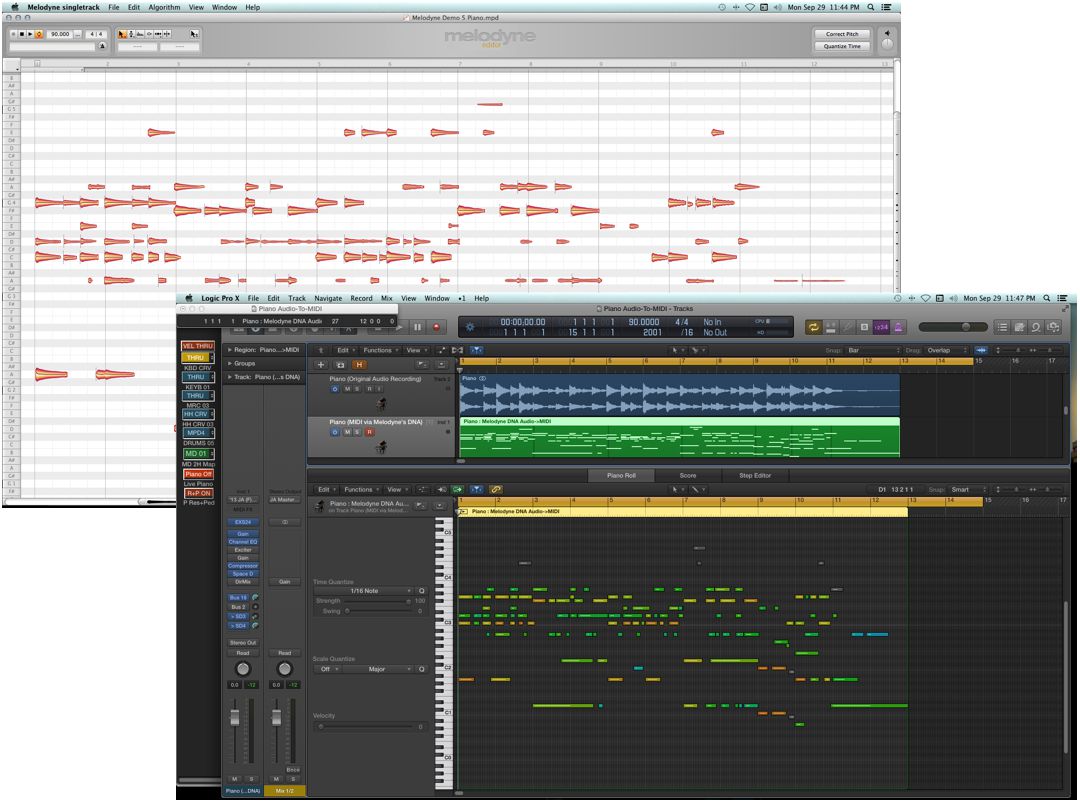 A polyphonic audio track (piano) converted to MIDI in Melodyne editor, and imported into Logic.

I'll finish up this “Mixing Rock” series with one more article—mixing Vocals to be released next week only on AskAudioMag.com.