In this installment of the Mixing Rock series, I'll cover the Guitar—electric (EG) and acoustic (AG). Obviously, this is a pretty big topic, but I'll try to touch on several areas that relate to getting guitar tracks to sit nicely in a mix.

Traditionally, most electric guitar recordings consist of a miked-up amp, but this may include more than one track. Besides the basic close-miked version (often a dynamic mic like an SM57 an inch or so from the speaker grille), there will often be an additional mic, positioned at a slightly greater distance—a foot, or several feet out—providing a more ambient version of the part. The two tracks are blended together in the mix, for a natural, subtle sense of depth. Although there will be phase differences between the mics, in this situation (unlike the mixing of direct and amped bass tracks) I'd wouldn't worry as much about phase-aligning the mics—if I perceive an undue thinness or hollowness, I'd address it, but otherwise, the point here is to add a sense of ambience and depth to the close-mic recording, and a little phasing goes with the territory. Nowadays electric guitar, just like electric bass, may be taken direct as well (straight into the console/interface). This will be an overly dry, dead sound, but it would assume processing through a modeled amp simulation or re-amping—I'll go through both shortly. 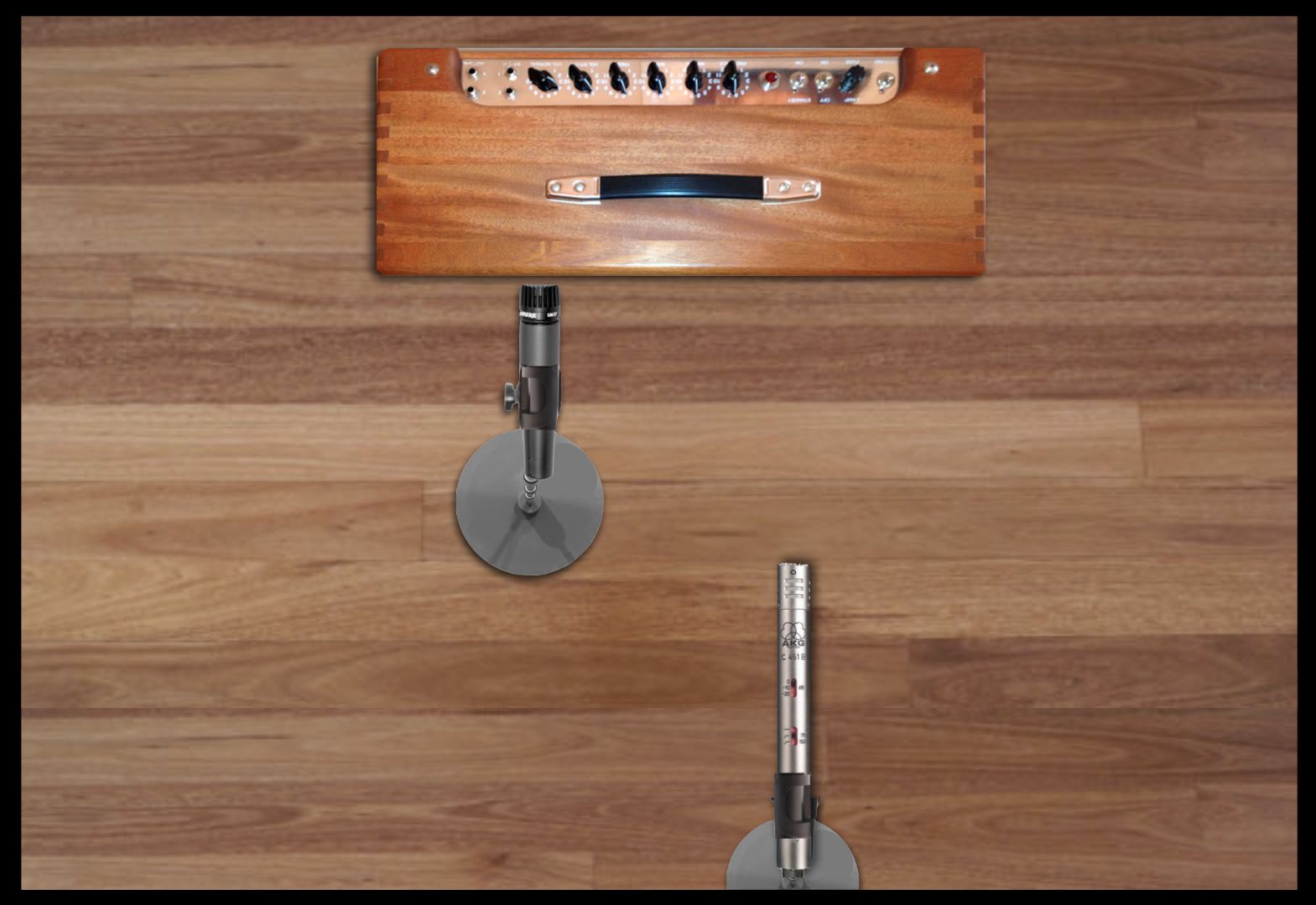 An acoustic guitar part, of course, usually consists of one or two miked tracks, as above, or sometimes a stereo recording. But even here, a mixer may come across a DI'd track, from an onboard piezo or magnetic pickup (common if the tracks come from a recording of a live show)—this presents some particular problems, which I'll deal with when I cover EQ & compression, below.

Guitar tracks may end up panned anywhere in the stereo field, depending on the type of part (chunks, chops, strumming rhythm, etc.), and the number of guitar parts in the arrangement. Center placement might be appropriate for tight EG chunks, or other rhythmic tracks, especially if they lock in with the bass, although I still like to place those a little off-center, balancing multiple tracks on both sides of the mix. Sometimes, if there's one bright acoustic guitar part, I'll pan it opposite the hi-hat, to balance off what will often be the two brightest instruments in the mix.

Doubling is widely employed for both electric and acoustic guitars, to fill up space in the mix, and to keep the stereo field well-balanced. If there are dedicated performed doublings, or even alternate takes, these can be widely panned (and even hard-panned) L-R—this is effective with any kind of musical part, from AG strumming to EG riffing. If there's only one track to work with, ADT (Artificial Double Tracking) can be employed, by copying the track, delaying the copy by around 15–20 milliseconds, and panning them opposite. This is a much tighter doubling effect, but you can loosen it up with a little delay and/or pitch modulation of the delayed version.

One thing to watch out for is when there are multiple guitar parts that come in and out in different parts of the song. You'd want to pan them so the mix maintains a good L–R balance throughout, avoiding, for example, a situation where all the guitars in the chorus happen to end up on the left side of the mix, leaving a big empty hole on the right. This may mean breaking a guitar track up and positioning it differently in different parts of the song, depending on what else is playing, and how the mix balances out section to section.

Naturally, EQ and compression will come into play, as they do on most tracks. If the guitar recordings have successfully captured the sound the player/producer was going for, via the guitar's and amp's tone controls, then EQing in the mix will not be for the purpose of shaping a sound, as much as simply making it sit better against other tracks. When the guitar sound is good to start with, I find I usually employ broad, subtle boosts or cuts, of only around a dB or three, typically in the upper midrange (presence) area (2–6 kHz), or the lower mids (300–500 Hz) to achieve a good blend without substantially altering the characteristic tone, which may be part of the guitarist's signature sound. On the other hand, if an EG track was taken Direct, even if that dry sound was the intent, I'd probably have to shape it more, adding a bit more of a midrange peak, and reducing high treble (and possibly bass as well).

Acoustic guitar, if it's well-recorded, usually will only need a slight bump in the highs (6–10k), for air and clarity. If it's going to be sitting in a busy, dense mix, then it's common to roll off low end considerably (≤100–200 Hz), to remove any boom that might muddy up the mix. But keep in mind, that same low end would be beneficial for a solo AG, or one used in a sparse arrangement, contributing warmth and fullness, especially if the guitar itself is on the bright side, like many modern instruments. If you find yourself stuck with a DI'd acoustic track, you'll need a heavier application of EQ to achieve a good tone. If the recording came from a piezo (saddle) pickup, a sharp cut around 4 kHz will help minimize what's referred to as piezo “quack”, an overly bright, edgy sound common to most onboard AG systems of that type (a little fast compression can also help tame the “quack”). If the AG's onboard pickup was a magnetic pickup, the opposite will often be required—a big, broad treble boost, combined with a bass and/or midrange cut, to restore the needed openness and clarity.

Compression is not as critical for EG—especially distorted EG—as it is for bass. When a guitar amp is overdriven to distortion, part of that effect is the compression of the audio, adding sustain, and providing a fairly even level. But clean parts can often benefit significantly from a little squeezing, to make sure that quiet ghost notes, hammer-ons and pull-offs, and other playing techniques are heard clearly, and not lost under the other instruments in the mix. Compressor types and settings will vary—I'm partial to a fast FET-type compressor, like the Urei 1176 (widely cloned in both hardware and software), or the vintage tube Fairchild 660/670, available nowadays as a plug-in simulation from many sources. The compression can be set to be mostly transparent, with slower (~10ms) attack & release, or set to be more noticeable (faster (≤1ms) attack & release), to add body and sustain to notes, especially with very clean guitar sounds.

Audio Example 2 Acoustic guitar, as recorded (1st), then with a little compression applied:

Acoustic guitar can benefit greatly from a little carefully-applied compression. As above it can be transparent, or more noticeable, accentuating the pick noise of the attacks (slower attack) or the ring of guitar chords (faster attack & release). Applied in the right amount, it can help a strumming AG sit perfectly in the mix (as a rhythmic element, with accentuated attacks/pick), without taking up too much space (big ringing, hanging chords). Sometimes, the amount/quality of the compression that works perfectly in a full mix will sound overprocessed if the AG has a solo moment, so it may be necessary, in those cases, to automate the compressor settings, or split the part up into separate tracks, and process each differently, as needed.

No discussion of mixing guitar in this digital era would be complete without covering Amp Sims—modeled versions of guitar amps, which include everything from virtual preamp & poweramp tubes to speaker cabinets and simulated mics. Many small/home/project studios nowadays tend to record electric guitar direct, getting the amp's contribution from an amp sim plug-in. This makes the recording process easier, and at the mixing stage, it offers the kind of choice that could only be dreamt about in an earlier age. Modern amp sims cover the range of just about any particular model & configuration you could want, from classic vintage Fender, Marshall, and Vox models, to modern metal (Mesa) and boutique amps. I won't even try to cover all the ins & outs of using these—that would be a whole (long) article in itself—but I will mention a couple of aspects. 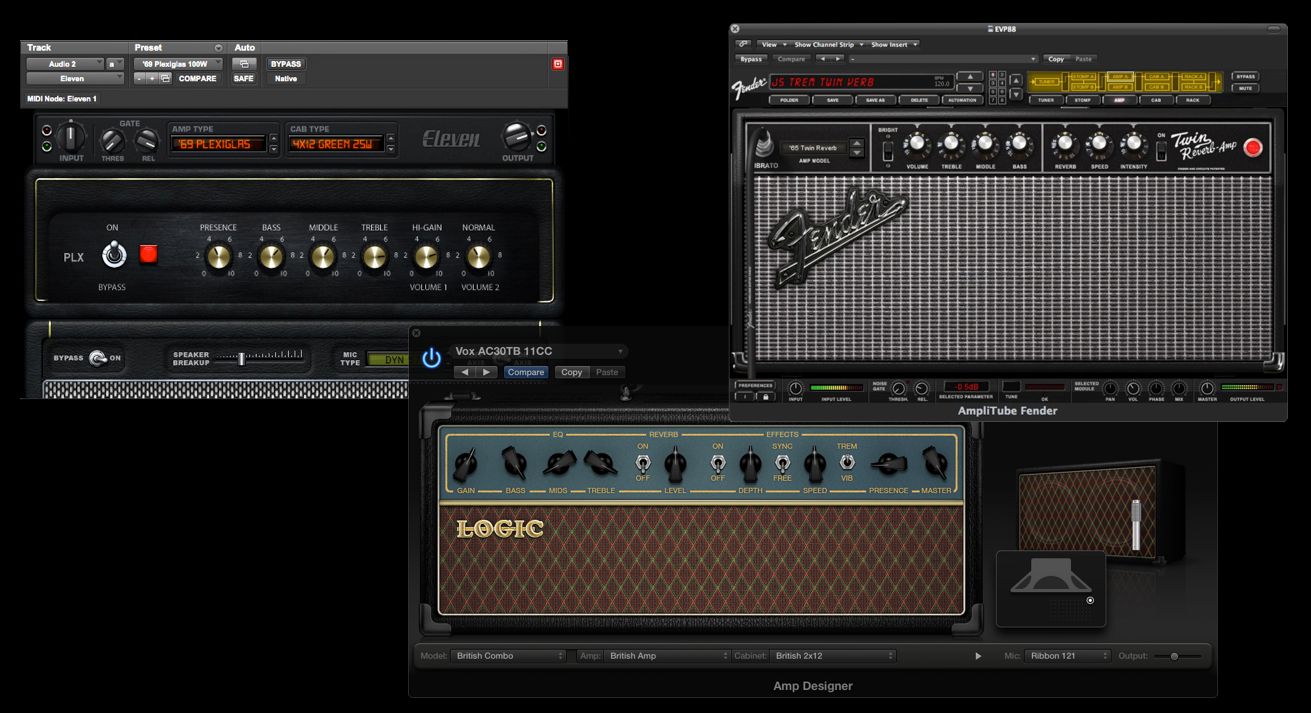 If you're adding the sound of the amp, via a plug-in sim, to a completely dry DI EG track, it's important to have an idea of what the player heard when the part was originally laid down. During recording, the DI guitar will be routed through the amp sim plug-in, so the performer can hear what the finished track will be likely to sound like, and play appropriately. But the amp sound is (usually) not recorded, to allow for greater flexibility later on. So if you're approaching a mix, and you didn't record the tracks, don't just blow out any settings in an amp sim you encounter—you'll want them as a reference, even if you prefer to use a different amp model. I'd bypass the original plugin/settings, but refer to it as I shape the new guitar sound—you can't always tell what the musical intent was from the dry DI track!

Some players/producers prefer to add the sound of an amp in after the fact by using a real amp, rather than a sim—this is called re-amping. The process involves sending a dry DI'd EG track out to the real world (via an extra DAW output, often through a box that will match level & impedance properly between amp & interface, like those available from Radial), and running it into a real, miked-up amp. The re-amped (mic) signal is then returned to the mix (via an extra DAW input)—it's another way to approach getting the best guitar sound possible.

I'll wrap this up with a brief mention of effects. Guitar tracks of all kinds can benefit from effects. Even acoustic guitars will want a bit of reverb, and ADT processing with a little delay/pitch modulation added can impart a very subtle edge of chorusing, for a slightly richer sound. Electric guitar tracks commonly employ spring reverb (like the onboard reverb tanks on most guitar amps, also available as part of most amp sim processing suites), and slap echo. Some guitar parts are simple riffs designed to be augmented by an elaborate series of rhythmic delays, but that's more the province of the performer/producer, than the engineer/mixer, unless you're wearing both hats. Naturally, any effect that you find in traditional guitar pedals can be employed, like old standbys chorusing/flanging/phasing, and, of course fuzz, and this is often where you can really get creative in the mix (but keeping in mind the artist and producer will have the final say)!

On that note, and since I'm pretty much out of space, I'll stop here. The series will continue with upcoming looks at mixing considerations for keyboards and vocals..