In the first installment of this series on Mixing Rock, I covered some aspects of approaching the sound of the drums in a mix. In this piece I'll talk about the (electric) bass, the other half of the rhythm section. Getting a good bass sound may not be as complex a process as tweaking the various elements of a drum kit, but it is key to achieving a solid low end in a mix—from the standpoint of both the mix's tonal balance, and the musical arrangement as well.

A Place for the Bass

As I did with drums, I'll start by mentioning stereo positioning considerations for bass. Most everyone knows that the bass is normally placed dead center in the mix—this is the standard approach nowadays, and has been ever since the advent of multitrack recording and console panning controls. In the vinyl era, this helped keep the record groove balanced and avoid skipping. But the main reason nowadays for keeping the bass in the center is to help it lock in, musically, with the kick drum, and to keep the key aspects of the rhythm section (along with the snare's backbeat) front and center in the mix. That said, there's no hard and fast rule that says you can't pan it elsewhere, or even double it in stereo (especially if one side has an effect added), but 99% of the time a simple center placement is the best bet.

The bass part in a recording can be anything from a simple DI'd (direct injected) bass track, recorded by plugging the bass directly into the console/interface, to a miked-up bass amp, or a combination of both. A simple DI'd bass recording, depending on the instrument and playing style (i.e. fingers vs. pick vs. slap, etc.) may range from deep and mellow to bright and trebly, often with less of the lower-midrange growl and grit that comes from playing through a typical bass amp. The bass itself can have a very wide dynamic range. When playing though an amp, the amp's (and speaker's) natural compression helps to tame this, keeping stray loud notes from jumping out too much here and there, but a DI'd signal will often need more compression or limiting to achieve the same evenness of response. Playing artifacts like string buzz may come through more clearly without an amp's band-limited speaker to soften them, and some extra attention may have to paid to those technical issues.

With the popularity of home-recording setups these days, it's more common than ever for the bass track in a mix to have been taken in direct, but for studio recordings, or live ensemble recordings, an amped-up bass is most common. If the bass was recorded through an amp, it'll usually have a more midrangy, often slightly more edgy sound, with a somewhat more compressed dynamic range, and possibly a bit more “air” in the track. And since most bass amps have EQ (tone controls), the frequency balance of the recorded bass track can vary more widely, depending on the decisions of the player and recording engineer.

A bass recording: DI'd (first), recorded through an amp (2nd), and combined.

When sitting down to mix, it's very common to find both a DI'd bass track and an amped-up track—the same performance recorded simultaneously both ways, for maximum flexibility in the mix. And rather than simply providing a choice, more often than not, the two versions will be blended together, to get the best of both worlds. The DI will provide some clean depth, and clarity for note attacks, while the amped version brings some nice midrange grit and coloration, and possibly more controlled dynamics, to the table. But when this is done, phase issues between the DI and amped tracks become a consideration.

It's Just a Phase

If you look at the waveforms of DI and amp versions of the same bass performance, you'll see that they don't line up perfectly in time—the DI track is a few milliseconds ahead of the amp track (this probably won't be obvious, visually, unless you zoom in quite a bit). This is because the extra distance from the amp's speaker to the mic used to record it—even if it's only an inch or two—causes that signal to be a hair later than the direct-injected signal path.

A DI'd bass track combined with the Amped version.

The resulting timing difference is too small to be of any musical consequence, but it puts the two signals slightly out of phase, which can result in cancellations and reinforcement of different harmonics and overtones that change the tonality of the bass when the tracks are combined, often for the worse, sometimes making the resultant bass sound thinner or peakier than it should be. If that turns out to be the case, the solution is to bring the two tracks back into phase alignment, either by delaying the DI track to match the amp track (via plug-in delay or region editing), or by advancing the amp track to match the DI (region editing). Again, this shouldn't affect how the track sits in the mix, as far as musical timing (feel), but it will provide a tighter, fuller tone, before you start with the EQ and other processing.

The Lowdown on the Low-End

When it comes to EQ, I won't try to offer specific settings—that's totally dependent on the tone as recorded, which, as I noted, can vary significantly—but I will suggest some general considerations. If the style of music suggests a warm, fat sound, adding a little EQ somewhere between 50-80 Hz (deep) to 100-150 Hz (boomy, “fat”) to 200 Hz (“punchy”) can help, again, depending on what you're starting with. If your EQ includes a spectrum analyzer (like Logic's Channel EQ), it might be helpful to switch it on, to see where the tonal peaks are in the original recording. But keep in mind, EQing the bass is one of the iffiest things you can do in most smaller, home or projects studios. If you're working in a room that hasn't been computer-analyzed and acoustically treated (99% of the time!), the room itself will emphasize and de-emphasize certain frequencies, and if you EQ the bass to compensate for those anomalies, the resulting mix won't travel well—it will sound much worse in other rooms with different problem frequencies! If room treatment is not an option, then it's a good idea to accumulate a few reference tracks (from high-quality commercial recordings, not MP3s!) with similar musical styles and bass parts, and play them through your system, using the sound of the bass tracks there as a guide to achieving your own bass tones.

In the mids and highs, things are more straightforward. If you want to bring out the sound of the fingers (or pick) on the strings, for better note definition, a bit of EQ boost around 4 kHz (more or less) will do the trick (just watch out for string buzz and other rattles, which also inhabit this frequency range). Most of the time, there's not much useful harmonic energy above 7–8 kHz, other than noises, and rolling off the extreme highs with a lowpass filter can help keep the track free of little scrapes and other extraneous performance artifacts, which might otherwise be emphasized by compression.

As I mentioned above, electric bass—especially a DI'd recording—can have a wide dynamic range, but in a mix you'll want the bass track(s) to be tightly controlled—even an amped bass track will likely require additional compression at the mix stage. Depending on the dynamic range of the recorded tracks, the compression applied can range from gentle overall squeezing to fast aggressive transient control. If the bass part is generally even, in terms of level swings and note-to-note volume, a little gentle compression may help to even out the bass's level in the mix, and fatten up the note envelopes, adding more sustain, without destroying any subtle dynamic variations (accented notes, etc.) that are an important part of the performance. An opto compressor, like the revered Teletronix LA-2A (or one of its many hardware and software clones) is a good choice—the LA-2A's relatively slow attack (~10 ms) & release and moderate ratio (~ 4:1) allow for a fair amount of gain reduction, leveling out the dynamics nicely, without the track taking on an overly squashed character. 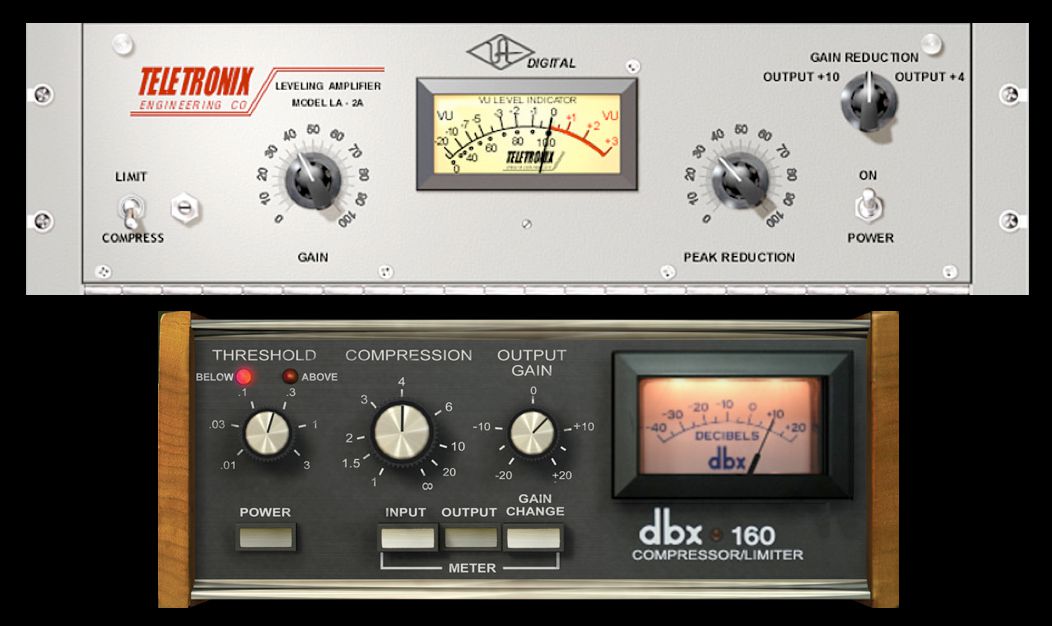 If a bass part has wider or more uneven volume swings, or employs slapping or hard picking, with strong transients, then faster attacks and higher compression ratios (≥ 10:1) may be called for—here, a Limiter would usually be the way to go. A good choice for this application would be a VCA-style compressor/limiter—the classic dbx 160 has long been favored for this kind of work, but any decent VCA-type design should do the trick. And of course, all of these specific types of compressor behaviors, as well as models of the classic hardware units I mentioned (and many others) are available as plug-ins. Obvious options are the vintage emulations from companies like UAD and Waves, but even DAW-included comps can suffice—for example, though it lacks any fancy graphics, Logic's onboard Compressor plug-in simulates various compressor circuit types, making it well-adaptable to different bass tracks.

Just as DI'd bass tracks have become more common, simulated (modeled) Bass Amp plug-ins have proliferated as well. Besides the numerous third-party plug-in collections, most every major DAW comes with Guitar Amp sims, and emulations of at least a couple of Bass Amps are typically added in. The most popular choices usually include the classic rock bass amp, the Ampeg SVT, famous for its growl and punch, and, for fatter, rounder tones (think classic Motown), the Ampeg B-15 (“Flip-Top”) amp. These amp sims are often self-contained bass processors, with EQ and compression (from the virtual amp as well as included studio compressor/EQ emulations). Duplicating a DI'd bass track and running the copy though a virtual bass amp in combination with the original can provide most of the benefits of a live recording, with a lot more convenience and flexibility to boot. 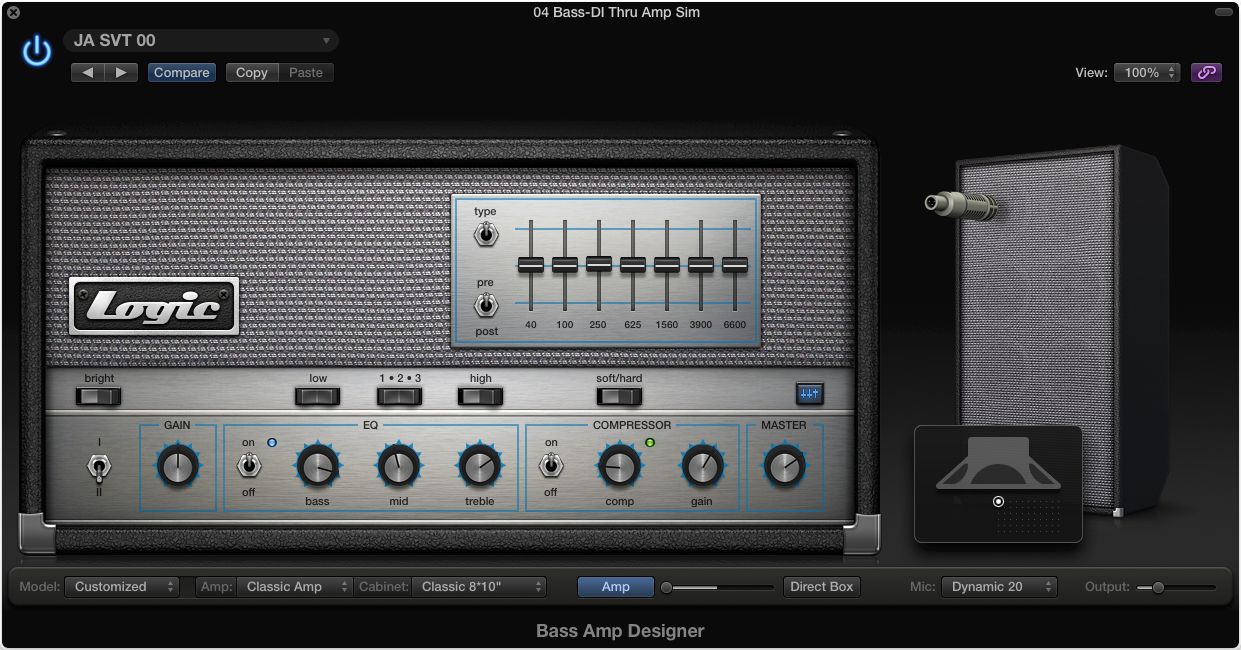 I'm running out of space, but I'll mention one last topic, briefly—reverb and effects. Most of the time, I avoid adding reverb to a bass part in a stereo mix. While you certainly hear a lot of it in a live show, that reverb is coming from all around you, in the room, while the bass's direct wave comes from the stage (or PA speakers). But in a stereo mix, the reverb and the original signal come from the same locations (the playback speakers) and even a little bit of 'verb can muddy up not just the bass part, but the entire mix. If I feel the bass sound is too bone dry, I sometimes add a tiny bit of ambience (no reverb tail), just for depth, but even there I'd be sparing.

While a simple, solid bass part is usually all that's needed to provide a mix with a nice underpinning, sometimes you might want to have a bass part with an effect. A little very light phasing or chorusing can be added to a bass, and of course, the classic Fuzz Bass effect is always on option—but please, only when appropriate!

Another possibility could be doubling the bass track with a synth bass, by converting the audio to MIDI notes and using them to trigger a suitable bass synth patch, or just running the bass (or a copy) through the filter, envelope, and LFO sections of a suitable synth plug-in. But this is getting more into arranging territory than mixing, so I'll wrap things up for now—until next time..