Tempo Sync All Your Audio In Logic Pro X

Tempo analysis and matching took a major leap forward with the Logic Pro X 10.4 update. In this tutorial, Darren Burgos shows how it works and how it can save you masses of time when editing.
Get deeper knowledge for Logic Pro X 10.4's Smart Tempo in these video tutorials: https://ask.audio/academy?nleloc=course/2925/smart-tempo-demystified

Dragging loops and audio recordings into Logic Pro that sync to your project’s tempo has always had limitations. For example, loops in Apple’s own “Apple Loop” format instantly adapt to tempo, but that's not true for WAV loops, which make up the majority of loops found on popular sites like Splice, Zenhiser, SampleMagic and others. You could always place the WAV loop at the start of a bar in Logic, then option-click-drag the bottom right to the correct bar length.

There’s always been Flex Mode too, but anything other than very punchy drum loops and musical parts would often not lock up perfectly. Acappella stems for remixing, sub bass parts or live recorded music played freeform (rather than to a metronome) would rarely sync to Logic’s set tempo using Flex without timing issues, stretching artifacts and degradation of the original recording. Using Logic 10.4’s new “Smart Tempo” feature when dragging in loops and audio recordings of any length, you can almost always be sure it’ll snap to the bars and beats of your Logic project. 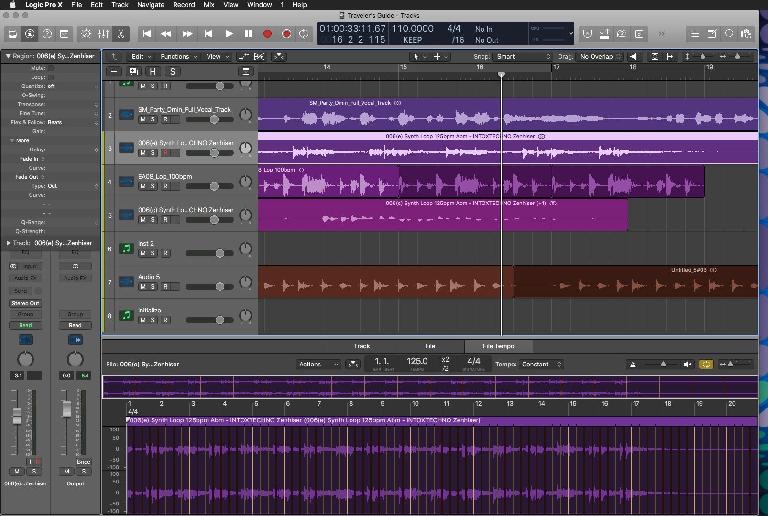 This might seem trivial to some other DAW users —cough! cough! Ableton Live— but for Logic producers using mostly audio elements, it’s a total game changer (and the sound quality of the process is the best I’ve heard so far). The Smart Tempo feature itself was derived from Apple’s free App called “Music Memos.” This voice/instrument recorder allows for the seemingly impossible; to add artificially generated, perfectly timed drums and bass to a freeform vocal/instrument recording, with almost spooky accuracy. This amazing tech was expanded upon and is now in full use within Smart Tempo in Logic Pro.

Directly under the BPM in the black LCD area at center top of Logic, it now by default reads “KEEP.” Click there, and a menu will appear. Choose “Smart Tempo Project Settings.” The Project Settings window will open to the Smart Tempo tab. Here you can choose the project’s tempo mode (for this article we’re only concerned with “Keep Project Tempo”) but more importantly, from the bottom menu labeled “Set imported audio files to”, choose “On + Align Bars and Beats.”

Logic will now keep an eye on your audio by time correcting it at every beat position. The whole process retains its musicality because it’s time-compressing the source material as is, and only makes adjustments on each beat position. You can now drag in nearly any WAV loop or recording and Logic will attempt to lock it "to the grid.” It works very very well, and sounds great musically and rhythmically even on freeform recordings. You can even drag in loops and recordings made with differing rhythms, feels and swing levels, and Logic will attempt to lock them into place with sometimes unexpectedly cool results. 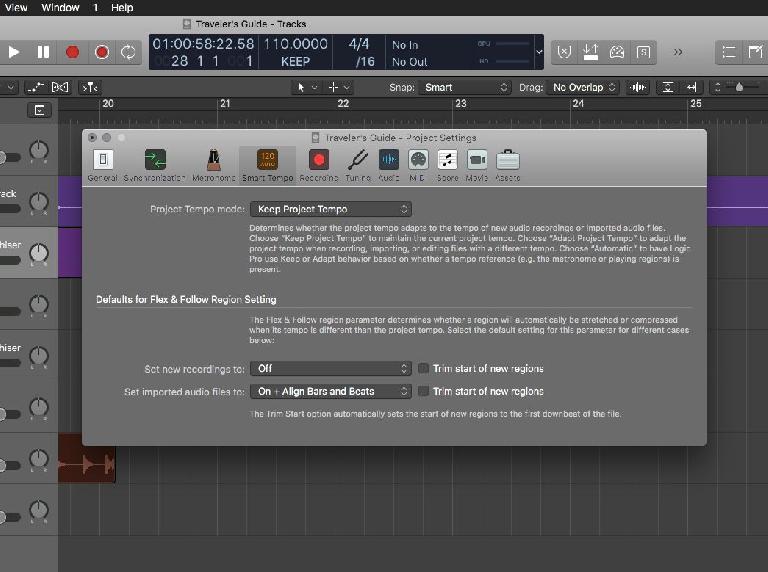 Drag some loops or audio recordings in - go for it, you don’t have to be shy any more. Most anything you drag in will now lock to your project’s tempo perfectly. Once you do, you’ll see that there’s a new tab in the audio track’s list of audio editors called “File Tempo.” Double click the region to open the audio editors, then click the File Tempo tab. If the loop or recording you drag in doesn’t sync perfectly, you can correct the timing here in several different ways. Often, by simply choosing the correct tempo (if you know it), or doubling or halving the tempo here too. You can also set the signature , which is often 4/4.

If you cut loops by hand from old recordings or your own live recordings, Smart Tempo will usually lock these down right from the start too, but you have total control if you need it. You can easily adjust the “downbeat” (start of bar/measure) with a lighter colored marker, and the beats (2-3-4 for example) with darker colored markers. Each of these beat markers has a collection of vertically placed points that allow for things such as scaling and time compression for fitting the source material. Markers are easily placed, because the waveform of the loop/recording is clearly displayed for reference underneath.

Another great new 10.4 feature is being able to use the standard Logic Loop Browser [Key Command: O] to access your non-Apple Loop WAV files. You were able to do this in the past, but now they’re separated by two categories; “Apple Loops” and “Untagged Loops.” You can drag and drop WAV loop collections (contained in a folder) to the browser and Logic will automatically create this new category, and even show the list of folders that contain loops. Loop/Clip/Sample based producers should rejoice as you can even preview WAV/PCM loops in the project’s tempo! 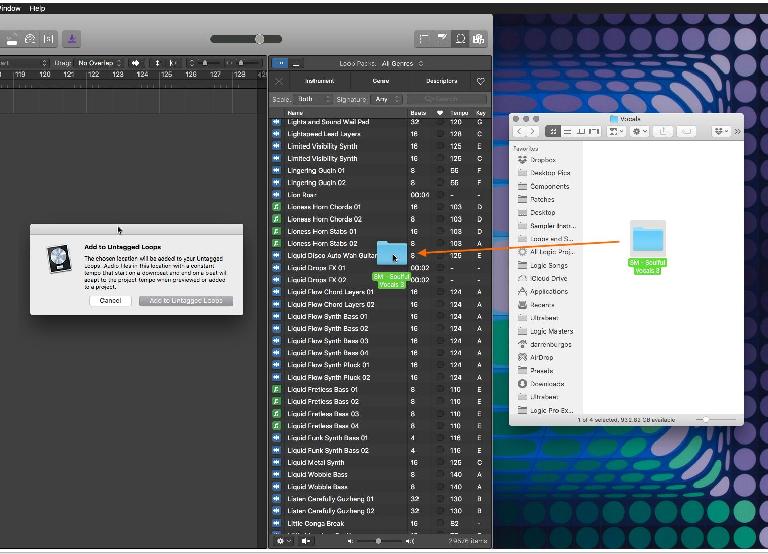 This new ability to bookmark hard drive locations might seem like nothing, but it’s far from it. For example - Ableton Live has had this functionality since its very first version. Whether you are using one-shot drums for creating kits in Drum Machine Designer, NI Battery and others, or you have a small or large loop and sample collection, being able to go directly there is really convenient. Think about ways you can organize your loops, samples, one-shots and recordings; create folders broken down by drum type or musical genre, then add them as bookmarks to Logic’s All Files window.

First navigate to the folder you’d like to bookmark, then right click and an option to save to bookmarks appears. You’ll see a new bookmark button appear along with the usual computer, home and project buttons. When you’re ready to add some files to your project, simply press F to open the All Files window (click the tab if necessary), then click the bookmark button and your locations will appear. These are saved globally and will be available to all current and new projects. You also have access to your existing “Untagged Loops” via a new button if you added any to the Loop Browser, and can even add more locations by right-clicking as above, but selecting “Add to Untagged Loops.” 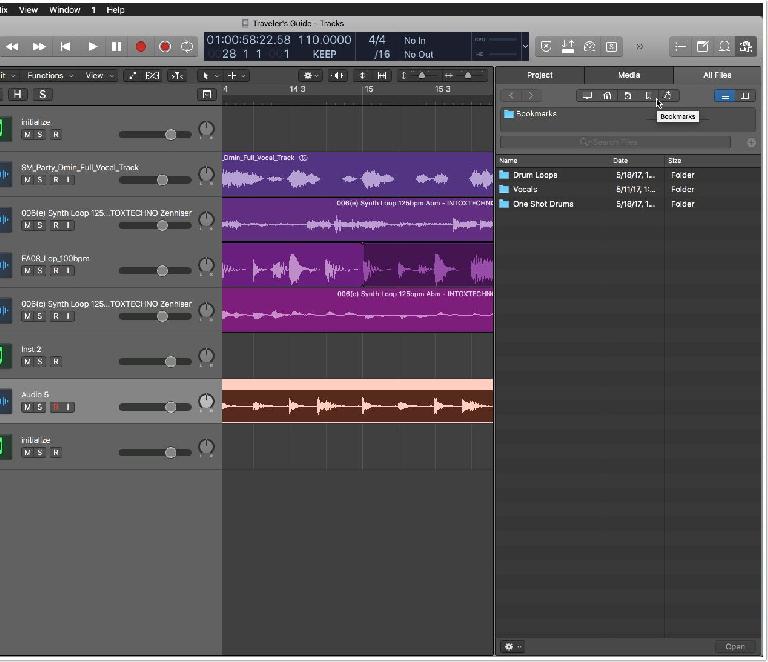 The Logic 10.3 update brought the ability to pitch or transpose any selected audio region via the Region Inspector/Parameters window and using this in combination with Smart Tempo is incredibly powerful. If your recordings/samples have silence at the start, choose “Trim Start of New Regions” under the Smart Tempo tab of Project Settings. Logic will find the first “downbeat” further into the region and sync it to a bar position.

TheUncannyValley
Thanks for this Darren. I usually dread coming to grips with new features but this article explained everything in a clear & concise manner. Just the way I like it.
DarrenB
TY that's great to hear :)!