At long last the eagerly awaited OP-Z, audio and visual synth and sequencer, the follow-up to the much loved and critically acclaimed OP-1, is now available to pre-order, shipping in October 2018.

There are few moments every year worthy of pure, unadultered, genuine celebration for synthesizer users. Today is one such day. Today you can dance, sing, trigger a multitude of sequences with pure abandon. Today is the day Teenage Engineering finally announced their long awaited multimedia synthesizer and sequencer, OP-Z, is available for pre-order and is shipping mid-October 2018.

It was as long ago as January 2016 at the NAMM show in Anaheim, California, we were first introduced to the mighty OP-Z. Over two and a half years later we're ready to join those wanting to pre-order... except (as of the time of writing) the OP-Z first pre-order run is over and we're now awaiting the second round coming soon!

What is so special about OP-Z? Why is it called OP-Z and not OP-2? Here's what Teenage Engineering have to say about it...

"It's been six years since teenage engineering released OP-1, the revolutionary portable all-in-one synthesizer which has now become an icon in the music industry. To be honest, many were skeptical at launch, labelling it as a toy and not a real synthesizer because of its color coded knobs, its creative user interface, and for some it was just because of its size – a synthesizer has to be big to sound big right?

"Today, with the introduction of the all new OP-Z, we will push the boundaries even further. this time the machine is so small we guarantee it will upset you. it's about half the size of OP-1, but comes with more dsp power that consumes less energy so now you can fly the atlantic 4 times back and forth, sequencing complete songs on 16 dedicated tracks before you run out of power. when ready to land, just slide it in your inner pocket.

"Still, OP-Z is about a lot more than just composing music. the Z stands for the third dimension, the depth, the creativity involved in making music. imagine animated art and videos that accompany your live show, or sequenced lighting, all the way down to composing your own interactive software. some people would call a device like this a dream machine. We call it OP-Z." 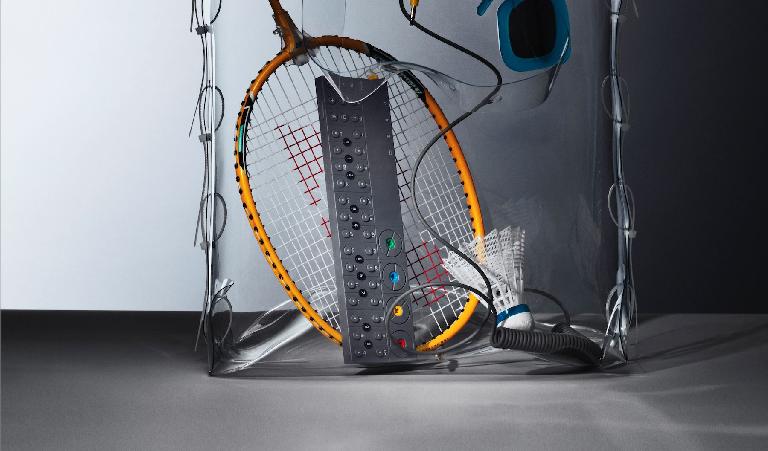 Badminton and synthesis. The obvious collaboration?

"Centered around an advanced 16-track sequencer where all tracks run independently, OP-Z makes individual track speed and track length possible. In addition to this it's possible to add unique step behaviours to every one of the 16 steps: a feature we call step components. think of this as dual layer sequencing where the first layer is a traditional 16 step sequencer, while the second layer adds variation per cycle, note variation, micro sequencing, direction, parameter changes, re-trig's and much more, all on just one single step.

"In theory, it's possible to create a complete song by programming only the 1st step of the 16, using multiple step components to create endless variations, a technique recommended for experts and engineers only. seriously, in some situations it's actually almost impossible to predict the complete length of a sequence. so we created a special component for those situations named ’catch up’, that forces a track to exit at a certain step to stay in sync. in total, there are 14 components sorted into 3 groups: triggers, note variations and specials.

"All 14 components have 10 values and behaviour programs. the product of all this is that you have 140 ways to alter just one single step. probably more than most people can handle. And to make step composing really intuitive and super fast, all keys are backlit with multi-color leds with instant machine feedback, a must-have for poorly lit club gigs and late-night-in-bed composing. actually, the print on the unit itself is made with a special glow-in-the dark-paint.
a pretty cool ’world's first’ for synthesizers."

On top of the above, other features of OP-Z include being able to pair the machine with a phone to act as a screen. You can even use the phone's camera, snapping a series of photos and arranging them to a beat, creating a synchronised music video, for example. There's even a dedicated OP-Z toolkit for Unity 3D so you can develop breathtaking motion graphics for your next VJ performance.

Oh, and let's not forget the Tape feature which records everything going on in the sequencer on its own track and allows you to perform tape-style effects like scrub, scratch and more.

Stay tuned to the Teenage Engineering website for more info on when you can pre-order OP-Z.