Montebello, CA (June 17, 2015): TASCAM has announced Hi-Res Editor, a free application that supports up to 11.2MHz DSD files or 384k WAV. The software allows playback and export of DSD files without intermediate conversion to PCM audio. It is available now as a free download for Windows.

DSD Audio can be played natively through USB devices that support it, such as the TEAC UD-501 and HA-P90SD. In cases where a PCM interface is used, or even the computer's built-in audio, the software automatically plays DSD back through the interface at any available sample rate. A section of the DSD file can be exported as a new file, either in DSD or WAV format, to separate one long recording into individual tracks. 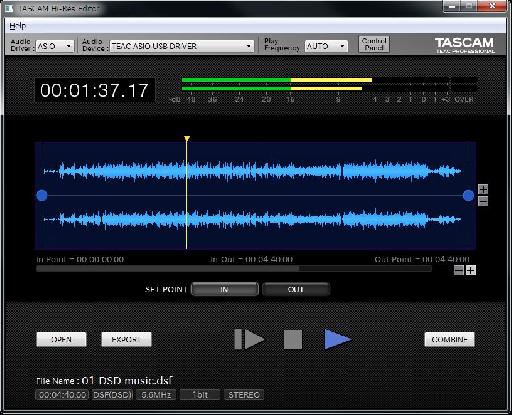 Two DSD files can also be combined into a new file, for example when a file over 2GB is divided. DSD audio can be converted to PCM, and vice-versa, for burning to CD or online distribution. In addition to the above, Hi-Res Editor can edit the gain level for WAV format audio.

Ideal for users of hi-resolution recorders like the DA-3000, the free TASCAM's Hi-Res Editor software is one of the only ways to edit native DSD master recordings.