Taking Logic Pro X Drummer to the Next Level

Language
Logic Pro X's Drummer has been widely acclaimed for good reason. It rocks... literally! In this tutorial Darren Burgos explores how to add more pattern variations and customize its MIDI data further.

Using Logic X's new Drummer tracks to build drum parts is quick and surprisingly effective. But sometimes you need more pattern variations than Drummer's built-in presets provides, or you might want to hand edit in a custom drum fill or flam. A not so well kept secret about Drummer is that it is in fact still a virtual instrument. When you change drummer track parameters, you're actually altering a generated MIDI pattern that is then triggering one of Logic Pro X new virtual instruments called Drum Kit Designer.

You can easily convert the special Drummer Regions into a regular editable MIDI Region. Control-Click the selected Drummer Region and from the Convert Menu, select “Convert to MIDI Region.” Now instead of seeing the Drummer Editor, you see the Piano Roll Editor, and can easily draw in drum rolls, fills, flams, move notes, and delete them. 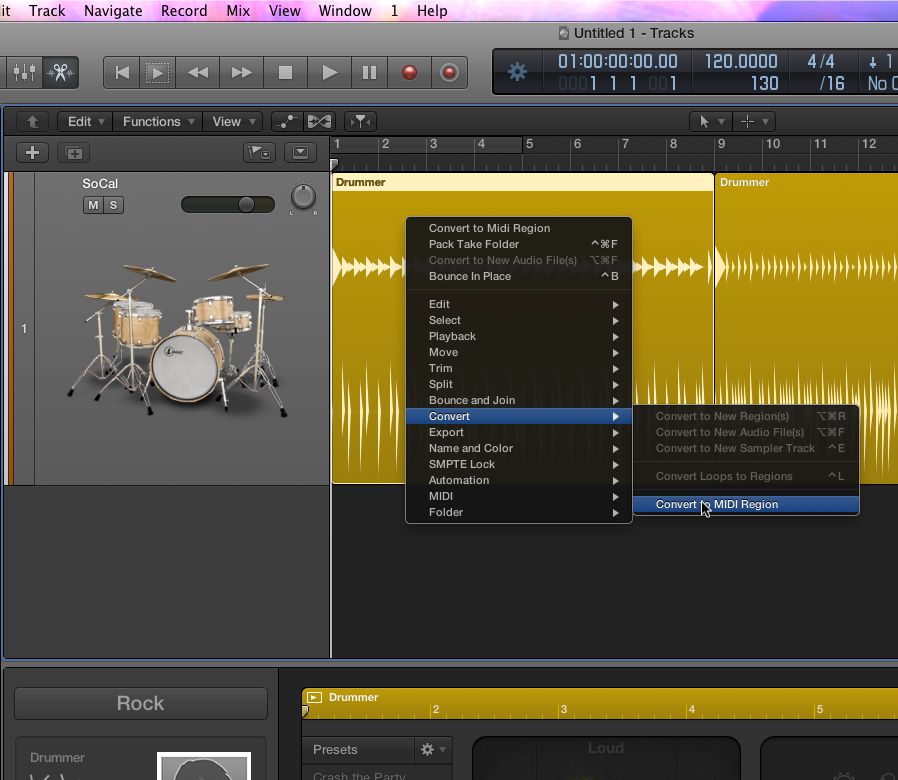 When you do this, keep in mind that it's a “one-way road.” You can't then pull back the edited pattern into a Drummer Regions and continue to change values in the Drummer Editor. You can right-click the converted MIDI region again and choose “Convert to Drummer Region” from the Convert Menu, but your edits are not saved, and the region is returned to its original state before it was edited. 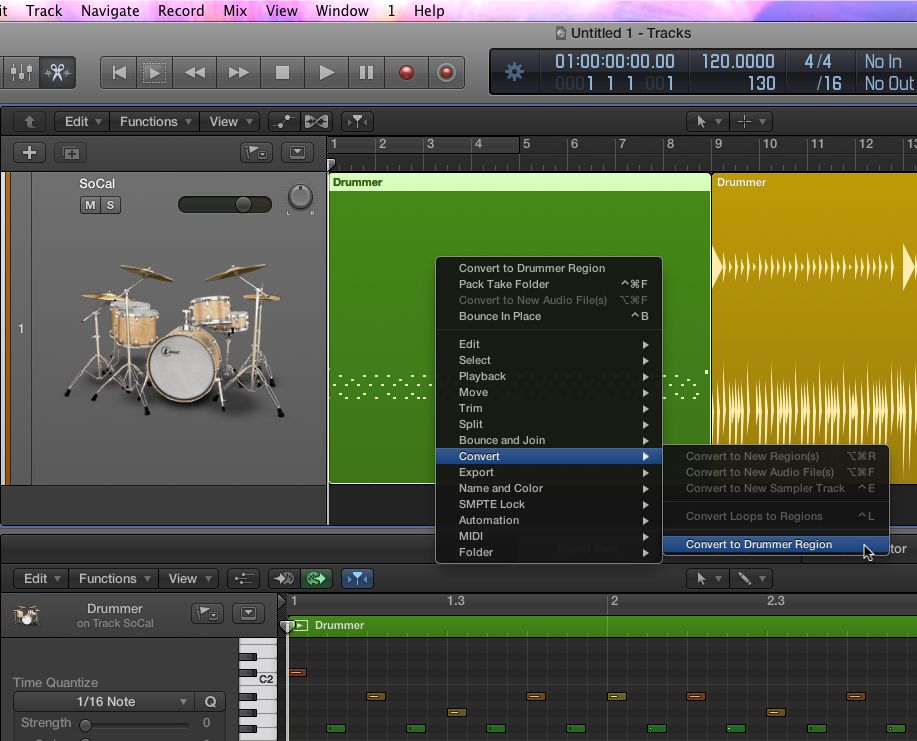 Once you've converted to MIDI, you can however still change the drum sounds themselves by simply opening Drum Kit Designer directly from the channel itself (single click the word “Drum Kit” on the channel strip). The kit itself can be changed via the Settings menu, and when you click any of the individual drums themselves you can swap them, tune, dampen and adjust their volumes. 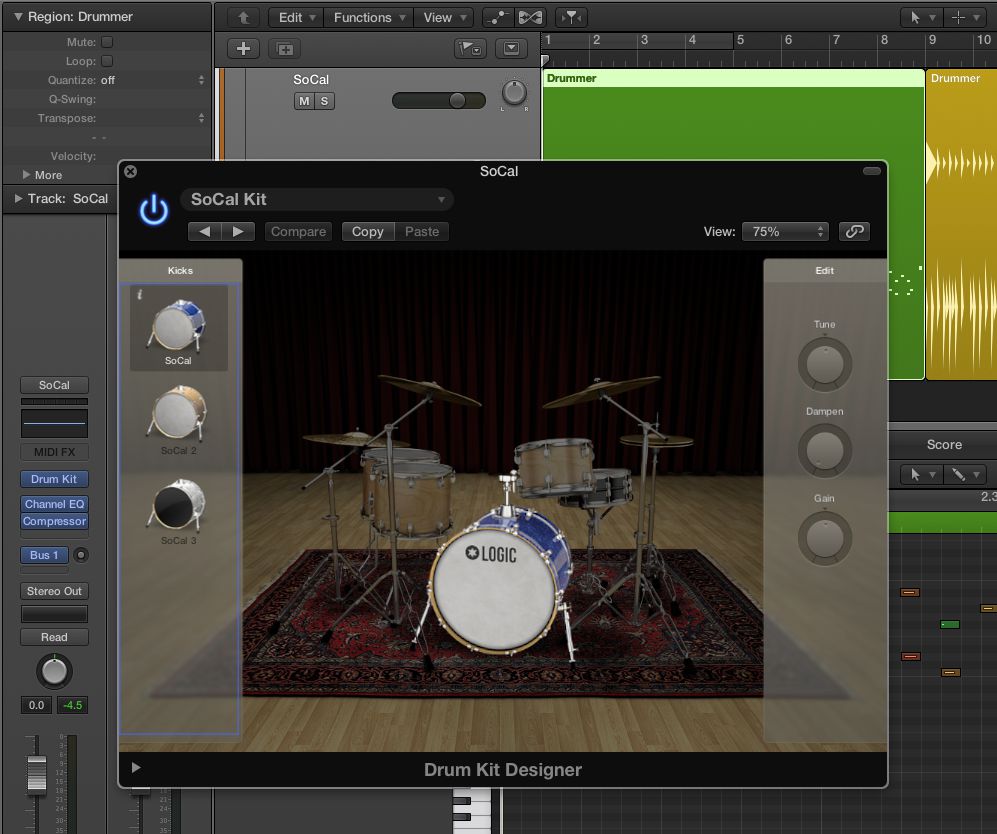 So now what about using external MIDI patterns with a Drummer Track/Drum Kit Designer? First, let's talk about General MIDI. A while back, the people in charge of MIDI standards decided that it was a good idea if certain sounds were always where you'd expect them to be. For example, in a GM MIDI drum kit, the kick sound is always on MIDI note C1, the snare is D1, closed-hat F#1 and so forth. So if the MIDI pattern you want to use is GM compatible (most of them will be) then you're in luck… simply drag it to the Drummer Track (or the track with Drum Kit Designer on it). Let's do this now by grabbing one of the thousands of MIDI patterns available in Apple's own built-in library… green Apple Loops.

Press the O button on your keyboard to open the Loop Browser, then click on the “All Drums” category button. Any loop that is green can be dragged directly to a Drummer Track. Drag one over to your Drummer Track now. The kit you've chosen either within the Drummer Editor, or directly from Drum Kit Designer itself remains, and the green loop MIDI pattern plays back using it instead of the kit it was designed for. Keep in mind that not all green Apple Loops will “line up” correctly. Many Apple Loops use kits that are not entirely GM compatible. You can however move the notes by hand to the appropriate sound. 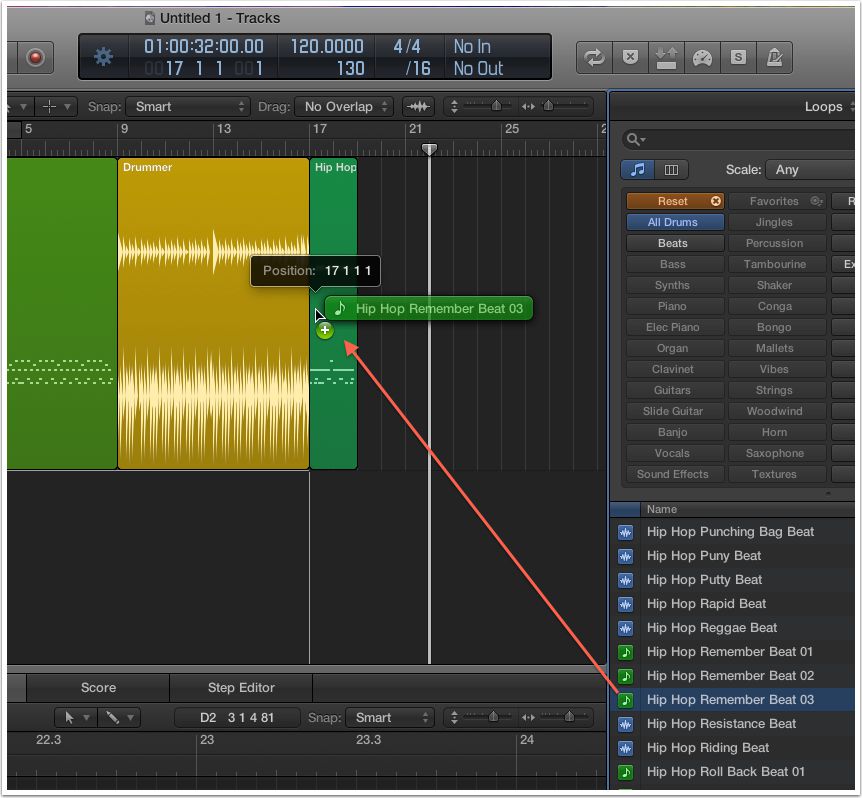 If the selection of green Apple Loops isn't enough for you, there are dozens of sources for MIDI drum patterns/loops. Not all are free, but they're out there. Make sure they're in the standard .mid format and you should be good to go. You can literally take these .mid loops and drag them into Logic. Keep in mind that often Logic will open new tracks for these when you do drag them in. Simply move the imported MIDI loop/pattern to the Drummer Track, and delete the extra tracks that may have been created.

Thanks for reading, and hope these tips were helpful to you!