Language
With some choice hardware and plug-ins, even when you're out of the studio you can get some truly excellent sounding guitars. Rich Tozzoli uses his UA Apollo and 3 stomp boxes in UAD v8 to good effect

Recently I got back from a several week tour where I had to keep working even while out on the road. The only amp I had was a small Fender 1X12, which was fine for gigs, but I wouldn't want to record through it. Luckily, I had my Universal Audio Apollo with me, and using the new UAD V8 software with the V2.0 Console release, I was able to get some wicked sounds. Here's a few things I discovered in my guitar-centric software exploration.

While this was available on the previous version of Console, I really took advantage of the ability to record the plug-in effects while playing through them. To begin with, the fixed latency is so low when recording through the software, that you don't notice it at all—which is critical for guitar players. While I was recording into Pro Tools 11, the live monitoring was through Console, and playback only happened through the DAW. To record your plug-ins live, simply select the UAD REC button in the Insert Effects section in the monitoring section on the right hand side of the console. When selected, your signal path with all of the inserted plug-ins will record into your DAW. So when you play back, you hear exactly what you played with no plug-ins in your DAW path.

The first cut I recorded this way was an old school reggae piece, and to get a cool guitar sound, I started with the new Friedman DS-40 (Dirty Shirley) amp, which is based on the classic 45 watt JTM Marshall with 6L6 tubes. Right out of the box, all I had to do was turn down the Gain and turn up the Treble, so I had that 'skank' chop happening. I literally didn't touch any of the other knobs, and it was spot on (I was recording using the bridge setting of a Telecaster).

To put even more old school sound into it, the next insert was the Ocean Way Studios plug-in. It's an acoustic space emulation that can deliver some seriously cool room sounds. Placed after the Friedman amp, I used Dry/Wet knob to find a decent amount of room sound, using the Mid Position fader with a distance of about 10 feet. In essence, the sound was like an edgy clean 45 watt Marshall in a tasty room with the mic about 10 feet from the amp. To dial in the right volume level, since the amp was feeding into the Ocean Way plug-in, I used the Mid volume fader along with the Master fader to get just the right level. The combination of the slightly gritty Friedman with the Ocean Way room sound was inspirational, and I cut the part and printed the sound. 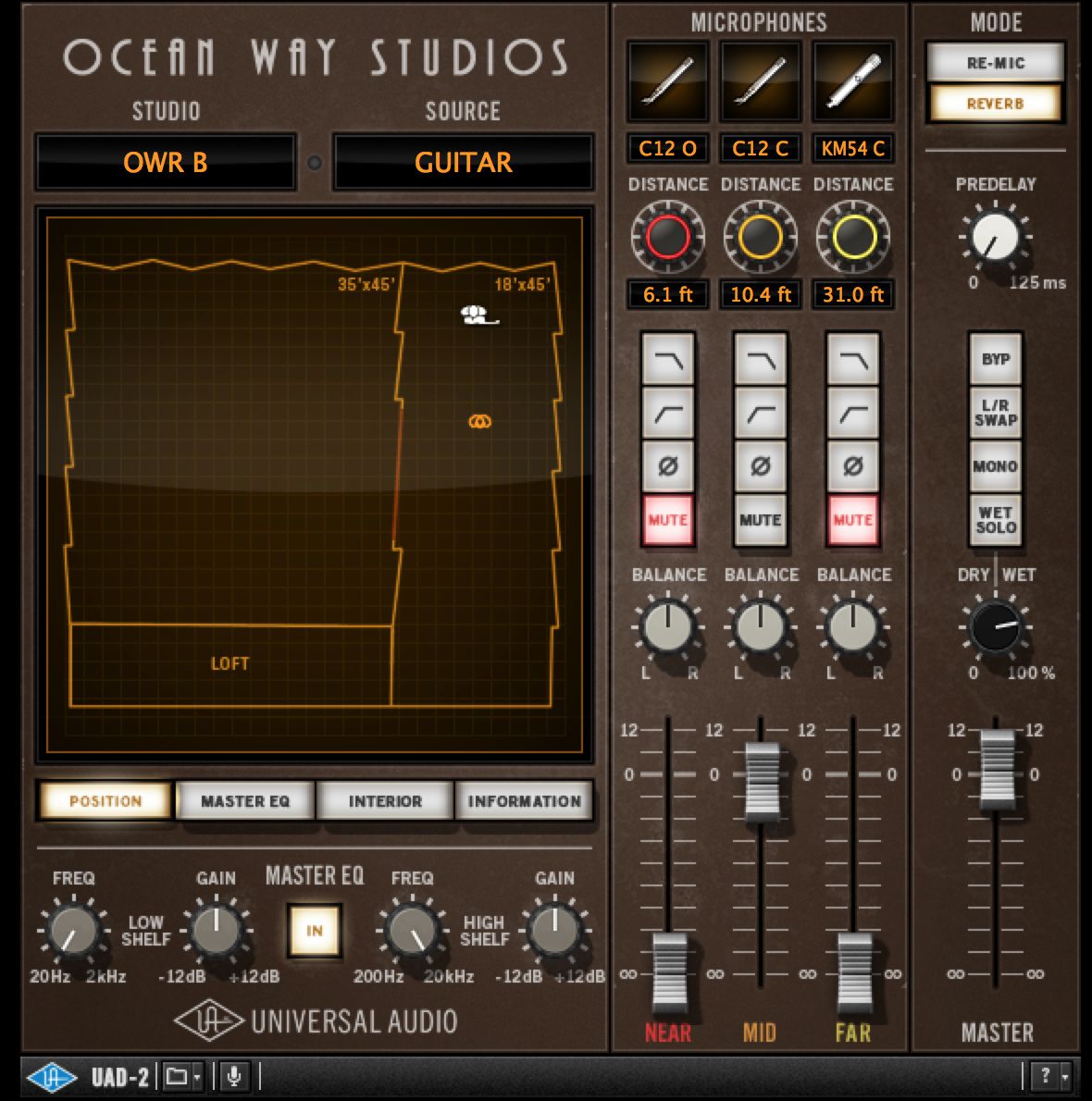 Part of my compact touring pedalboard was my trusty TS 808 Tube Screamer. But lucky for me, it's now available as a plug-in within the new Distortion Essentials bundle. So to get that slightly nasty, blues/rock tone, I was able once again to just call it up as an insert on the Console and print the sound. It doesn't get any simpler than the three knob Overdrive, Tone and Level. One of the first things I noticed about it was the 'sponginess', which is a term I use for the ability to get a bit more grit out of a signal path when picking harder. In this case, I was using a tube DI as the front end, so that helped. But the TS808 has the ability to react to your attack, which makes for more interesting guitar parts in my opinion. 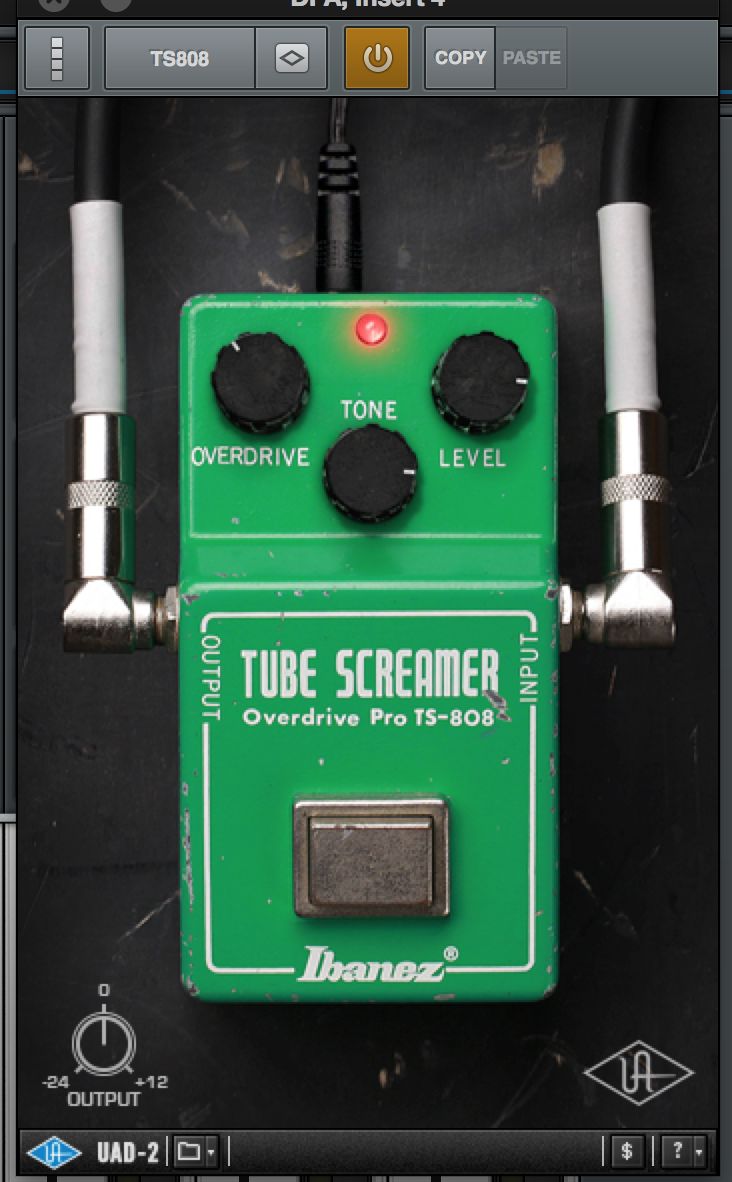 My standard sound to get a bit of edge is to have the Overdrive up around the 11 o'clock position, with the Tone knob set around 3 o'clock. This removes a bit of the edge and lets me thicken up the sound without it being harsh. Note that the Level knob, when used as an insert in the Console recording path, is not a Wet/Dry. In other words, the master volume you set on the TS808 will effect the rest of your signal path—you either have the effect in or not. However, I found a partial workaround on the next track I cut.

Another plug-in that I used (and totally dig!) from the Distortion Essentials Bundle is the RAW Distortion. It's based on the nasty old Pro Co RAT pedal that can shred a guitar sound to pieces. But once again, there is no Wet/Dry control on the pedal—it's either in your path or not. Luckily, we have bus/aux sends in Pro Tools (and surely within your own DAW). 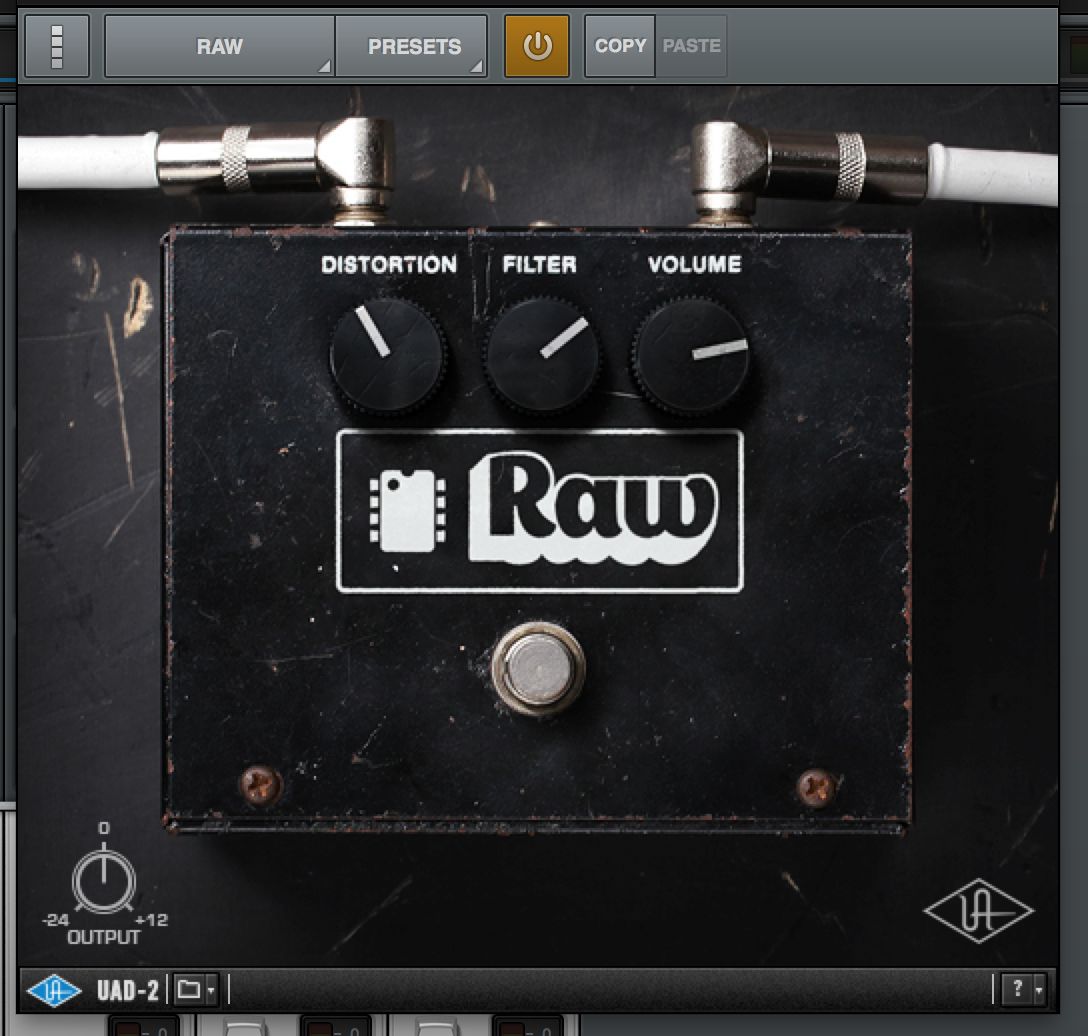 To add just some RAW tone to my guitar sound, I inserted it on a mono AUX track. By using a Bus send, I was able to add just the right amount until the guitar had that nasty thickness I wanted. The farther you push up the send, the more your guitar sound goes into the RAW pedal. I found this to be an effective way to add only some of the RAW sound in, without putting my whole guitar signal path through the pedal. I panned the mono RAW Aux channel to the same position as my guitar, and had a rocking nasty tone.

After my road recording experience, it reminded me of how fun it is to get creative with guitar tones. Don't be afraid to print that sound if you like what you have. If a room tone sounds good, use it. Plugging directly into a software pedal can also yield some cool sounds, and also by using an AUX/Bus combination, you can dial in just a little or make it scream entirely. The key is to get creative and use your ears.

Here are some vacation guitar sounds created with the help of my Apollo and the 3 stomp boxes: