Language
You probably use the filters on your synths all the time, but how much do you really know about them? This guide will make you a filter expert...

The filter is arguably the element of a synthesizer that does the most to define its character. Words like squelchy, brassy, creamy, gritty and so on are often used to describe their impact, and reading those adjectives in this context probably made you think of a few specific synths. Perusing the various offerings in both the fixed architecture and eurorack markets presents a perplexing plethora of jargon. To make matters worse, many of these terms overlap, as manufacturers will often use different names to describe the same feature. So what makes all these filters different and how does that affect the way a synthesizer will sound?

First, let’s brush up on the basic filter types and attributes. The low pass (sometimes referred to as high cut) filter is the most common type of synthesizer filter. As its name suggests it allows low frequencies to pass through, which can be useful for taming an abrasive top end. High pass (or low cut) filters do the opposite, letting the high frequencies through while cutting out the more rumbly tones. Mix a high pass with a low pass and you get either a band pass or a notch filter, depending on how they are arranged. A band pass allows only a narrow band of the frequency spectrum to pass through while the rest is filtered out. Notch is the opposite, filtering out only a narrow band of the frequency spectrum. A coffee filter, on the other hand, separates the ground beans from your coffee (I threw that one in just to see if you were paying attention). 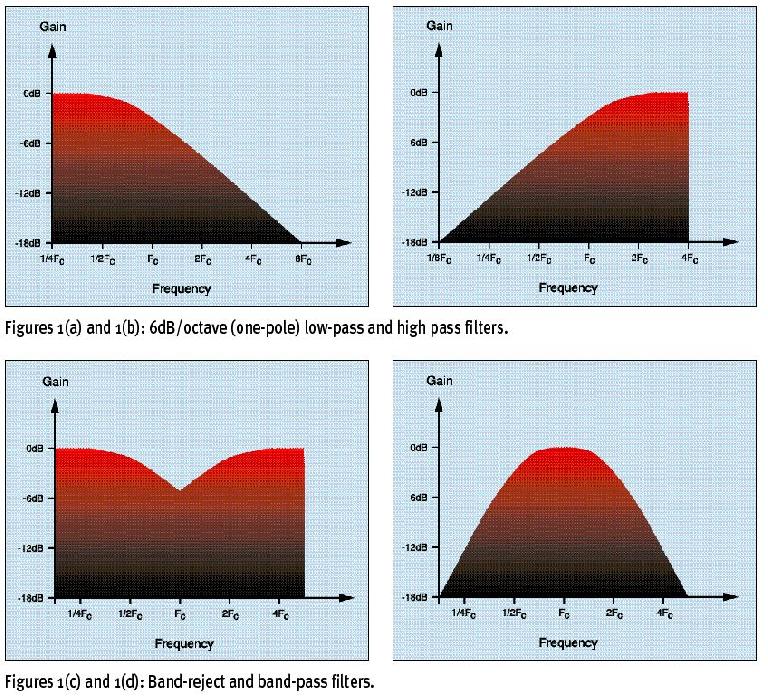 There is also the more rare and mysterious All Pass filter. If everything is allowed to pass through then what exactly is filtered? In this case the entire signal is passed through but shifted in phase and blended with the original signal. At the filter cutoff point the phase shift is ninety degrees. The resulting phase cancellation causes an effect that sounds similar to a phaser or flanger. Similarly, comb filtering, which is the term for the actual result of a phaser, flanger, or chorus, is caused by blending the original signal with a slightly delayed version of itself which creates a series of notches through phase cancellation. The length of the delay determines where in the frequency spectrum the notches occur. Varying the amount of the delay time is what creates the swishy jet plane effect.

The cutoff frequency is the point in the spectrum where the filtering takes effect. Resonance is an emphasis added through feedback at the cutoff frequency. Sometimes the filter resonance parameter is labelled as Q, standing for Quality. In some cases adding resonance causes a dip surrounding the resonant peak. Some filters are able to create enough feedback that they produce a tone without any input signal at high resonance settings. These are referred to as self oscillating filters because they can effectively function as sine wave oscillators.

The number of poles, or slope of a filter determines how steep or gradually material is filtered beyond the cutoff frequency. Each pole represents a reduction of six decibels per octave, so a four pole filter would have an attenuation of 24db per octave.

While most synth aficionados are familiar with the above types of filters, they are also aware how much a low pass filter can vary from synth to synth, or even between different versions of the same model. Now that we’re on the same page, let’s take a look at some of the different architectures used to create some of our favourite filters. 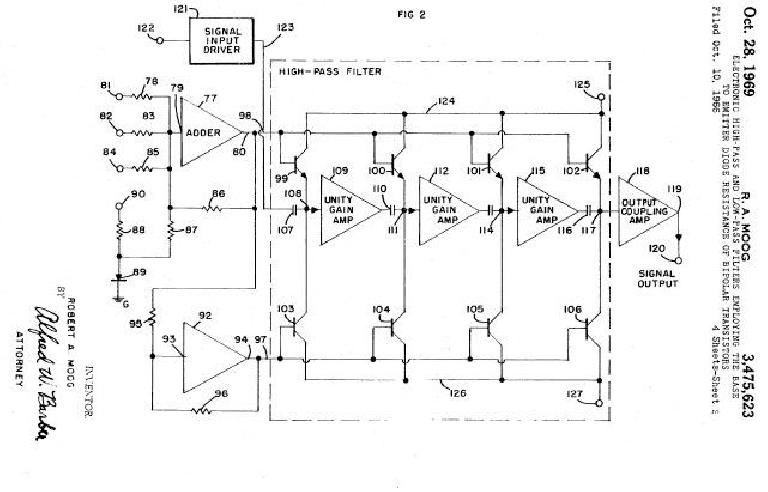 The Moog Ladder Filter Schematic, as submitted to the US Patent Office

Naturally we have to start with Robert Moog’s patented design, because of the massive impact it had on not just his own legacy of fantastic synths, but on the entire landscape of synthesizers. Transistors were fairly new technology at the time, and Moog discovered that by employing them he could more easily control a filter’s cutoff point with voltage. Before that, expensive large networks of resistors were used, which were clunky to control. Moog’s method also introduced a pleasant distortion, helping to create the warm rubbery sound that people associate with and seek out in Moog filters.

With the release of the Minimoog Model D in 1971, synths were now available in a much smaller and more affordable form. Moog submitted the patent in ‘66, and it was granted in ‘69, but that didn’t stop Roland or ARP from using his design on some of their synths. The Roland SH-2000 used a similar Transistor Ladder circuit, as well as the SH3a. ARP used Moog style filters in their 2600s and Odysseys until threatened with legal action in 1976. 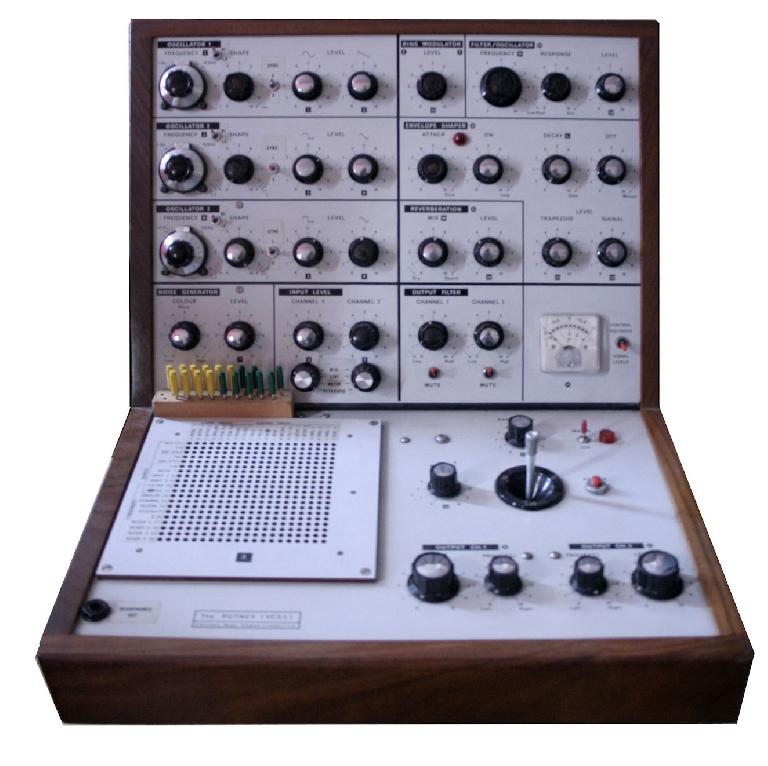 EMS adapted Moog’s design, and effectively avoided his patent, by developing the Diode Ladder Filter. Ironically, this filter is best known as the sound of the Roland TB-303. While the transistor ladder design electrically isolates each pole of the filter, the diode ladder causes the poles to interact with each other. The Diode Ladder Filter is a much less predictable, non-linear design that contributes to the squelchy sound we have come to know and love. There is a misconception that the TB-303 used an unusual 3-pole 18db/oct filter, but it was actually 4-pole 24db/oct. 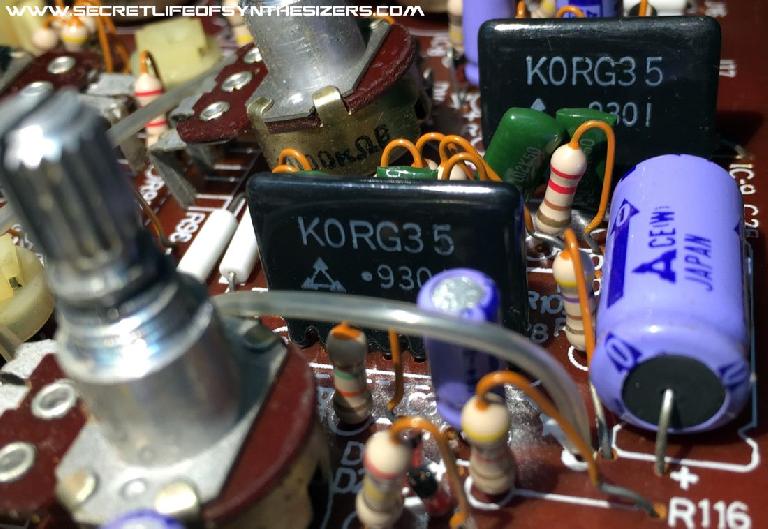 In the late ‘70s, Korg’s Mr. Mieda began using a small chip labelled Korg35. It first popped up in their PS series poly synths and later in the MS-10 and first generation MS-20s before they switched to an OTA filter. Decades later, this filter was reborn as the humble Korg Monotron and the schematic was released to the general public with great enthusiasm from the modding community.

This schematic revealed that the circuit of the Korg35 chip was a type of Sallen-Key Filter, a simple low-cost filter design. The surrounding circuitry was critical in dictating the behaviour of the Korg35, such as whether it was high or low pass, or able to self oscillate. The Steiner Parker filter used originally in the Synthacon and also similarly reborn in the Arturia Brute series, is also a Sallen Key filter. However, the Steiner Parker filter is arranged to be state variable, and can therefore output high pass, low pass or bandpass with a selection switch.

OTAs were gradually refined to become the dominant alternative to the transistor ladder filter. OTAs react to gain changes with a resulting change in impedance that allows them to function as a very precise voltage-controlled resistor. OTAs have less internal distortion and therefore a generally smoother sound. Roland led the charge in 1969 with the CA3080 chip which was used in the SH-1, SH-5, SH-7, and System 700. Roland refined their design over the years and used OTA filters on their polysynths such as the Jupiters and Junos.

Bill Gross and Don Sauer developed the LM3600 for National Semiconductor which was used in the later generation Korg MS20s. Korg, Doug Curtis, and Dave Rossum also developed their own consolidated OTA chips with the NJM2069, CEM3320, and SSM2040 respectively. While it’s well known that Curtis filters are an integral part of the distinctive Dave Smith or Sequential Circuits sound, it’s astonishing how many synthesizers made use of Curtis chips, including the OB-8, Matrix-12, and Xpander from Oberheim. Similarly, while Dave Rossum was a co-founder of E-Mu, his chips were used by Korg and a range of other manufacturers. He now has a company under his own name where he continues to refine his passion and expertise for filters and synth technology for the eurorack format. 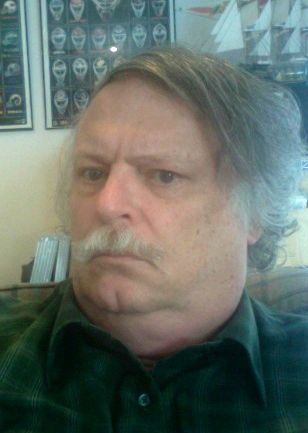 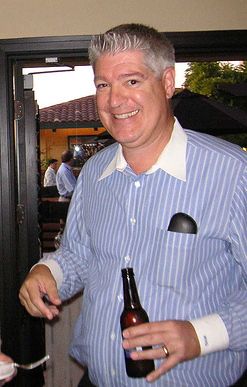 Learning about filter types (without a degree in electrical engineering) requires learning about the history of the technology and its evolution. It’s interesting how interrelated they all are, with so many directly reacting to the Moog Ladder Filter, or using chips developed by the same two men. Obviously these are gross simplifications of the techniques, technology and behaviour of the various filters used throughout synth history, but hopefully this article helped your understanding of this essential component.

Marc Doty and the Moog Foundation go deep into Filters and Synthesis in this excellent course in the AskAudio Academy.

Rob Keeble of AMS Synths creates a range of eurorack modules, but he has some fantastic information relating to the various classic filters for which he has passionately created clones:

Universal Audio has a great article on the history of the Moog Transistor Ladder Filter: http://www.uaudio.com/blog/moog-ladder-filter/

Tim Stinchcombe has some detailed examinations of Diode Ladder and MS10/MS20 filters: http://www.timstinchcombe.co.uk

An obituary of Doug Curtis from Keyboard Magazine was posted on Gearslutz with some great information about his influence:

Don Sauer writes about the invention of the LM13600/LM13700 along with some rather odd miscellaneous links:

Here’s a breakdown of some of the filters used in classic Roland synths:

This blog has some great in-depth features with fantastic photos under the hood of some classic synths like the Yamaha CS80 and the Korg PS3300:

Doepfer and Dave Rossum have very helpful and detailed descriptions of the technology and behaviour of their filters.

Watch Marc Doty and the Moog Foundation go deep into Filters and Synthesis in our excellent video course in the AskAudio Academy.

According to this thread, originally it had a 4-pole filter using 4 CA3080 OpAmps then later switched to a 2040. Both were cascaded OTA filters to avoid the Moog transistor ladder patent.